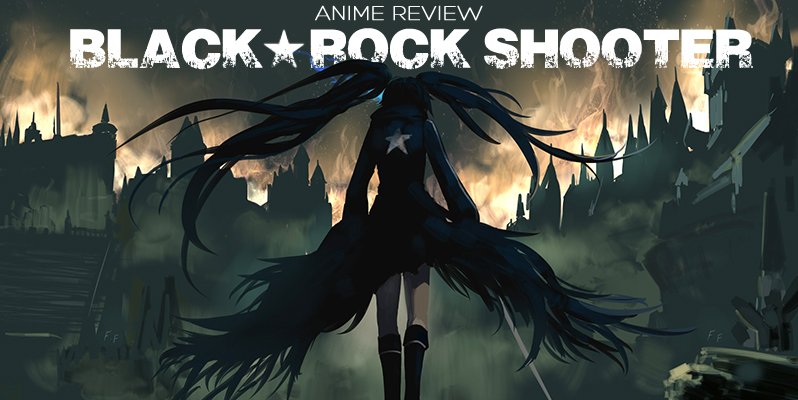 Black★Rock Shooter had an interesting path on its rise to prominence. It went from illustration to Supercell/Hatsune Miku song to music video to OVA to eight-episode anime series, to be exact. Now, years after its premiere, it hits the pinnacle of success… its very own review on YuriReviews!!! Okay, that’s probably not the pinnacle, but don’t let that stop you from reading what we have to say about it~

Upon entering middle school, the idealistic Mato Kuroi quickly befriends aloof Yomi Takanashi and the two discover their shared interest in a particular picture book. Just when it seems that this could be the beginning of a beautiful friendship, everything changes when, during a visit to Yomi’s place, Mato meets Yomi’s best friend, Kagari. While all this is happening, a girl bearing a strong resemblance to Mato is fighting an endless series of battles in an alternate world. Who is she, and why is she fighting? 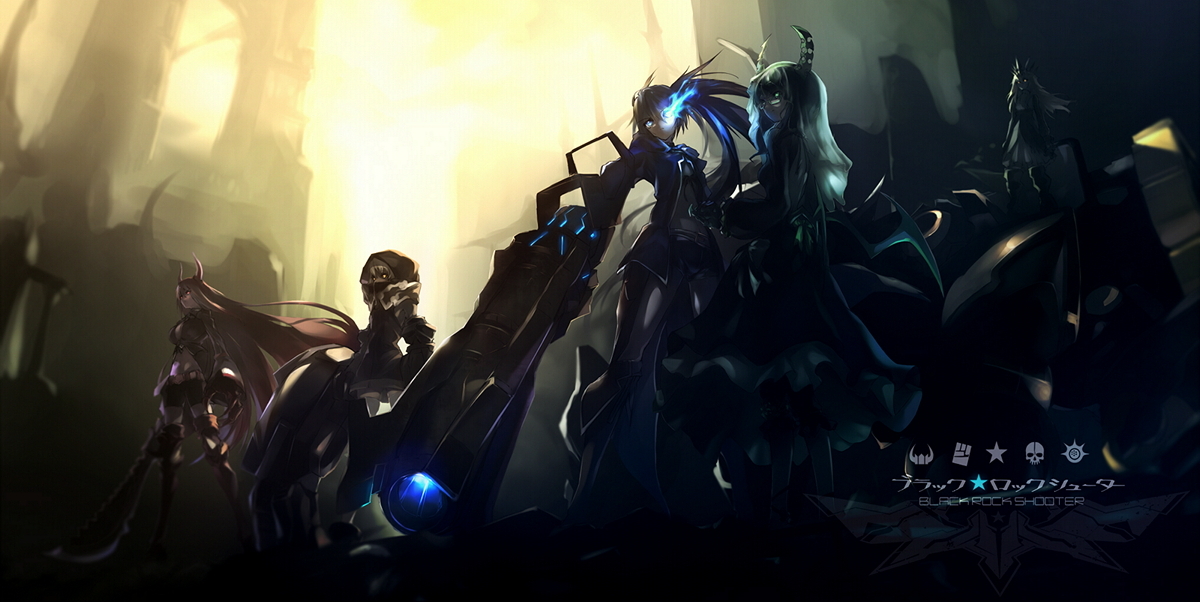 If you’re at all familiar with screenwriter Mari Okada, you’d probably know that several of her works deal with gloomy psychological themes that force the characters into perilous situations. Well, B★RS is no exception. Without giving too much away, the story in this series can best be described as more confusing than it needs to be. Outwardly visible or not, the emotional hardship each girl faces manifests itself in the alternate world (and their alternate selves), and it’s here where the confusion arises from. It’s a shame that it’s so easy to get lost and be left wondering why characters acted in a certain way, because there are times when the series is very compelling, yet you can’t appreciate it as much as you should because you’re left trying to decipher what exactly is going on.

Even after watching it a few times now, I’d be lying if I said I fully understood everything. There are some things that aren’t explained well enough for my liking, but overall, the story is certainly adequate and introduces plenty of drama that makes things all the more entertaining.

So I felt that the story was presented in a way that overly complicated matters. What about the characters? Mato, Yomi, Kagari, Yuu, Saya, and Kohata all bring something a little different to the table, and as a collective, they’re quite engaging and interesting. If it weren’t for Hanakana, Mato would almost seem a bit too similar to your stereotypical protagonist, so my reaction to her is rather lukewarm. On the other hand, there’s Yomi. Yomi’s earned Yuri Anime Legend status, and to me, she’s far more fascinating than Mato. Part of her appeal has to come from just how flawed she is (and the fact that she wears glasses :P). Kagari…. Every anime could use a character like Kagari. Yuu and Saya are just unique and intriguing (and Yuu is adorable). And Kohata is fun and easygoing, while not taking anything too seriously… except basketball.

All of the characters are troubled to some degree, and I think that makes them more relatable—and in turn—more likable and provocative. I guess you could say that everyone pitched in and helped to ease the negative impact of the story, though that makes the story seem worse than it actually is. Anyway, there’s a lot to like with this group of girls, and regardless of how you feel about them, you likely feel something, which is a sign that someone’s doing something right.

DISCLAIMER: No such wardrobe malfunctions happen in the anime. 😛

While the story wasn’t always easy to follow, what ended up nearly making up for it is the action. The hyper-stylized alternate world in Black★Rock Shooter (TV) is home to some spectacular battles that raised the bar for CG implementation in anime, in my opinion. In addition to the CG, some quality art direction and cinematography help make this a visual feast for the eyes. Another thing that needs to be mentioned is the character designs for the girls in the alternate world. Grim yet oddly beautiful, I loved them all, especially Strength’s design. Back in 2012, The Motion Picture and Television Engineering Society of Japan awarded this series with a technical achievement award in the Broadcast Animation category, so that pretty much says all you need to know. Simply put, when it really wants to be, B★RS (TV) is a visual tour de force.

It probably gets overshadowed by the visuals, but the audio is solid in its own right. For an anime that features so much emotional turmoil, the soundtrack does a good job of contributing to the already tense mood. The more upbeat tracks didn’t have nearly the same effect on me, but they weren’t bad at all, and they served their purpose well enough to be effective enough. This anime stars Kana Hanazawa and Miyuki Sawashiro, so you just know the voice acting is going to be good, and it is. Those two happen to be my favorite seiyuus, but I don’t think that’s bias talking at all, as the other characters were voiced well, too. Although it isn’t the most memorable thing you’ll ever hear, the audio doesn’t really get any complaints from me and combines with the visuals to form the basis for what is some high production values. 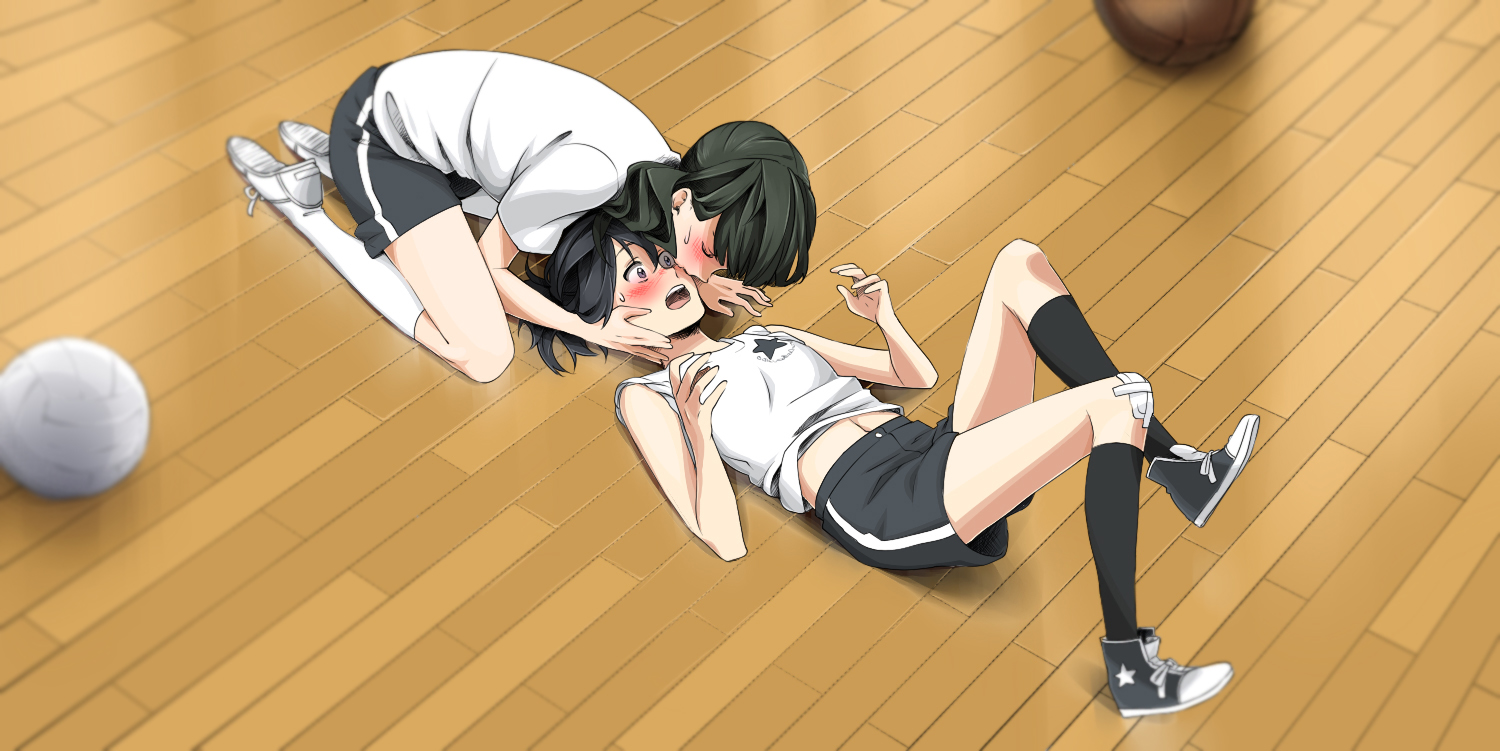 ^^ Sadly, this doesn’t happen in the show either.

Right off the bat, Mato takes an immediate interest in Yomi and yuri fans the world over gleefully set sail the MatoxYomi ship on her maiden voyage. Alright, that probably makes it sound more sensational than it actually is, but it’s not very hard to see the yuri vibes between the two. Once or twice, Mato is teased about her relationship with Yomi, so it’s not just viewers that see something between the two of them. And later on, a case of jealousy makes it apparent that Yomi has some feelings for Mato as well, although I wouldn’t say that their friendship really ventures far enough to get a higher yuri score. That’s because, given the amount of craziness happening all around, those yuri vibes don’t last for too long. SPOILER WARNING: Highlight the white area to see the hidden text. It’s only when Yomi deletes all of Mato’s emails that this ship hits the glacier that sinks it, but despite having freed herself from her feelings for Mato, the two girls eventually remain friends, so there is something to salvage from the shipwreck. There was certainly room for more, yet it’s somewhat understandable, since romance might’ve felt a little too out of place in an anime like this one.

For as great as the action is, Black★Rock Shooter (TV) relies on a narrative that isn’t the easiest to follow, and as such, may confuse some who end up watching. From a yuri standpoint, there’s obvious subtext, but when the shit starts hitting the fan, the yuri is forced to take a backseat and it never really recovers. Great for action fans and aficionados of psychological anime, B★RS (TV) requires attentiveness, but rewards observant viewers with a very competent and worthwhile experience. 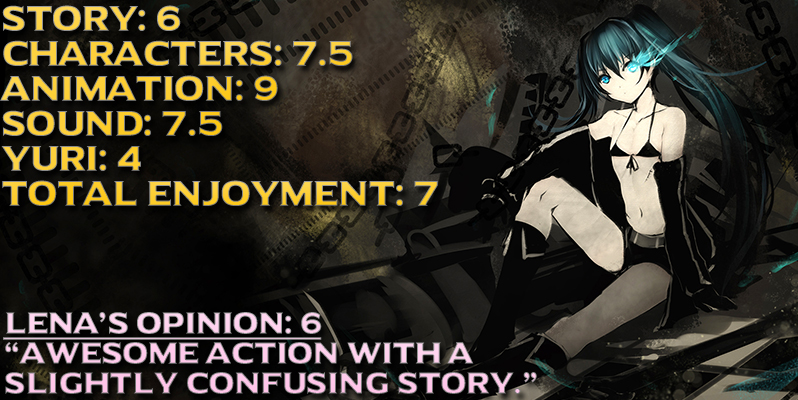