I know what you guys are thinking: “Why is she putting up yet another post about Kindred Spirits?” Well, that’s really easy to answer. Even if I already posted my review of this wonderful Visual Novel, there is simply plenty more for me to say. And while I tried to hold back my inner fangirl in my review, I’m letting it all out in this one. So be prepared. It’s gonna be a loooooong post~

This post is going to feature the following aspects:
– My favorite characters, couples, SFW scenes, and NSFW scenes
– Things I didn’t like
– Things I’d like to see in the future concerning this VN

So let’s start with my favorite characters

1. Kiri
There is no other character who entertained me like this one. Her constant hunger for cute things, as well as her unrestrained behavior when finding said cute things, were both adorable and hilarious to watch. Now if we add in the fact that she just can’t understand that she’s plenty cute herself, that makes it all the easier to understand why Tsukuyo, as well as I, just couldn’t help but fall in love with her.

2. Ano
Despite the fact that she’s unfortunately not romantically involved with anyone, she’s still quite the Yuri supporter. Even though she seemingly doesn’t really understand real-life yuri, she’s eager to help out young women in love, as well as talk about fictional romance between girls. Though, her top selling factor is definitely that gap between her oh so open and fun-self and her easily embarrassed-self, whenever she’s the center of attention.~

3. Sachi
I think you could say I’m a big fan of these types of polite, reserved, Yamato Nadeshiko-like characters. Though, it would have been boring if that was the only important character trait to name here. What’s even more important is the fact that her perfect image always crumbles whenever she’s so eagerly talking about the Yuritopia they’re going to build in this school. Cuuuuute!

Moving on to my favorite couples

1. Kiri & Tsukuyo
I’m usually not a fan of age gap, nor do I get a kick out of these forbidden student x teacher kind of relationships. In this case, however, the whole concept of it just made these two irresistible to me. Kiri being head over heels for her oh so cute little teacher, and Tsukuyo first fretting about all of this, but then totally going into girlfriend mode, despite their risky situation…. HNNNGHH. I just can’t take this. It’s like they are pressing all the right buttons for me with these two!

2. Aki & Youka
To be honest, at first, I just couldn’t imagine these two getting together. Like at all. Though, that’s their main selling point, don’t you think? Such opposite personalities finding their way to each other, especially with characters such as stoic and unapproachable Aki and easygoing and little dorky Youka. Thanks to these huge differences, their conversations never cease to entertain me, especially when a certain someone just couldn’t keep her hunger for Youka under control~

3. Matsuri & Miyu
Unlike most other couples, these two had been together for quite a few years already and simply know how relationships work. Though, despite the long experience—or maybe especially because of that—the two just can’t stop fighting, which was simply put, pure entertainment. Though, that is not all. What also added to my enjoyment was the fact that sexually frustrated Matsuri just couldn’t keep her hands off of her easily to enrage girlfriend~ 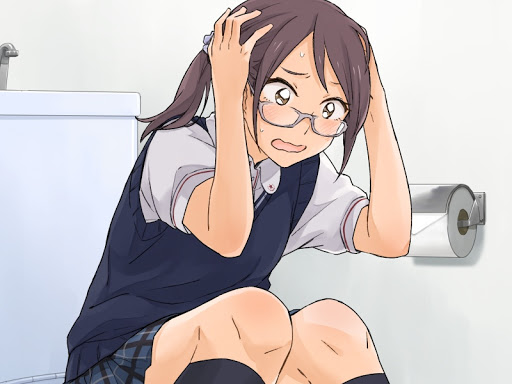 1. Finding out that you’re gay in a bathroom stall
I have easily played this one scene over 10 times already because it’s just so freaking funny and cute. Little or big Kiri sitting on the toilet, sweating heavily, and going completely nuts over the possibility that she might actually be gay for her teacher. Also, you gotta love the fact that she simply started off with stating everything cute about Tsukuyo, then drifted off to calculating whether it actually makes sense for her to be gay, only to arrive at the conclusion that there is no helping it. 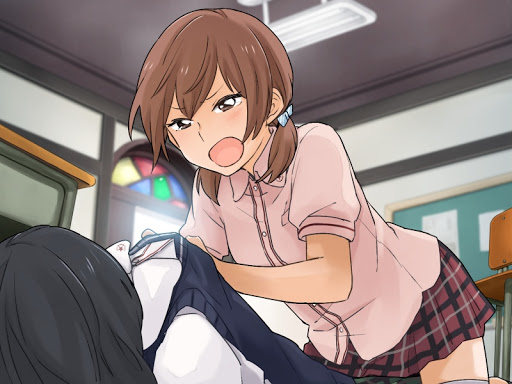 2. Seina going berserk
I don’t know why, but I just love this scene so much. It’s not cute, it’s not funny, and it doesn’t involve any yuri actions. It’s just Seina going completely berserk, putting one of her senpais back into place. Though, the way she does it, the way her voice changes so drastically, the way she uses all kinds of swear words, and the mere fact that such a cute little girl could do something like this… awww, I just can’t help it. She’s cute no matter what she does, and for some reason, her enraged self is pretty appealing too, especially when we take into account why she was going berserk in the first place. 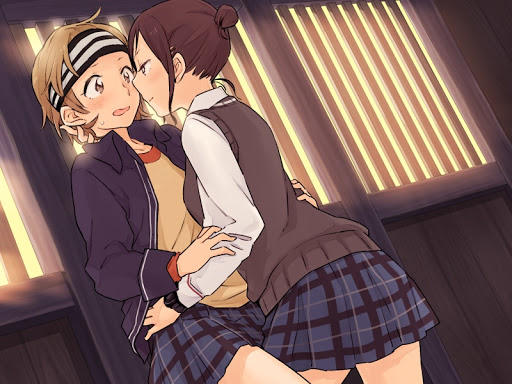 3. Aki having her way with Youka
I guess that short description sounded lewder than intended, though, that scene was plenty hot in its own way. Not only does Aki actually have her way with Youka, pushing her against the wall, kissing her over and over again, and basically talking her into having sex with her right then and there. It’s also pretty damn cute and funny how Youka reacts to all of this, especially their little comedy act, with Youka stating all the facts why it might be a bad idea to do it in school and Aki simply crushing all of them with, at least more or less, reasonable answers. That was fantastic~

1. Kiri & Tsukuyo
Well, Kiri is leading this list yet again. I’m actually surprised at how much I must love her…. Anyway, this scene literally took my breath away. First of all, Tsukuyo is actually topping Kiri?! Who would have thought that?! Also, starting out with that wonderful line of “Sensei is going to teach you.” God, are you trying kill me here?! And don’t even get me started on how perfectly this scene is written. They are certainly doing a little more than what we saw in the previous sex scenes, though the mood is pretty light, since they have an adorably cute exchange of words about porn midway through. I guess it’s a little unfortunate that Tsukuyo didn’t agree to snuggling up while sleeping after that, though falling asleep hand in hand after having sex is already plenty cute~

2. Seina & Miki
I really don’t know where to start with this scene…. They became girlfriends, then kissed, and midway through, they realized that their bodies felt so incredibly hot that they just needed to do something about it. I just love how naturally they both agreed on doing this, and especially how Seina even begged for it to happen, not even knowing what it was she was begging for. Oh, and did I already mention how freaking nice this scene was voiced? Well, you could say I’m not that fond of “too loud” H-scenes, so this was really pleasant to listen to, to say the least~

3. Matsuri & Miyu
Admittedly, I love reading about characters’ first times, since I just think that these are the most magical moments. Though, despite running into the risk of sounding extremely lewd, I also enjoy sex scenes that happen after a big fight, or some that simply happen after a long time, with both parties getting totally frustrated about it. And that’s exactly what happened in this one. They got into a fight, partly for not having had sex for months, and at least one party was openly telling us and her girlfriend that she was sexually frustrated. And so the sex that eventually happened was just too good! Also, this is the only couple with experience, so their scenes were extra steamy, though still not over the top, which is the perfect mix~

As mentioned in my review, there is one big thing that bothered me throughout the whole Visual Novel, though I’ll let Yuna speak for me: 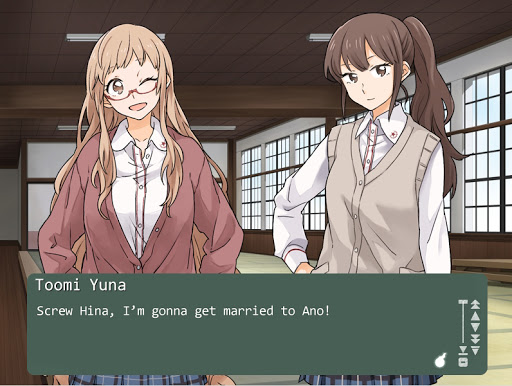 Or that’s how I’d like things to go…. I guess I just can’t get over the fact that Yuna actually decided on Hina. I know, I know. There wasn’t really anything to decide on anyway, and after reading their story, it kind of made sense to pair them up. Though, I really can’t get over the fact that I just can’t see Hina in a relationship. She’s the perfect little sister for Yuna, but that’s it. Ano, on the other hand, is the perfect girlfriend material here. Why couldn’t Yuna just see it that way as well?!

Okay, I got it out, so I’ll stop complaining. That’s actually the only big thing to really name here anyway. Of course, they could have voiced all the scenes, and of course they could have added a few more CGs, though, those are just minor complaints that didn’t really affect my total enjoyment, so let’s end this little section right here.

Well, since Ano wasn’t paired up with anyone, why not have her as the main character of a sequel? Since she can see, or at least feel, spirits and ghosts around her anyway, she would be like the perfect main character for another Visual Novel of this kind. They could be 3rd years, or even better, university students, and we could simply experience how she ends up in a similar situation Yuna got herself in. They could add in all kinds of new characters, maybe even some more with “experience”, since they’d be older in this one anyway, and they could even have characters from Kindred Spirits make cameos. Imagine it. It sounds totally awesome, and I sure believe that Ano would make an awesome main character~

Though, I already know a lot of people are shipping Ano with Nena. I guess that’s mostly because they are the only two that didn’t end up getting into a relationship. Though, I liked it that way. The two don’t really match up, at least in my opinion. Ano is probably better off with someone like Yuna, since I got the feeling that she’s into the more cool and collected type of girls.

Well, what I’m trying to say here is that I’d really like to see a sequel, and I’m pretty damn sure I’m not the only one. It’s probably quite hard to come up with a fitting follow-up story, though I believe I already came up with a pretty good idea myself, don’t you think?

For now, I guess we’ll have be content with what we already got and what we might get sometime in the future. What I’m talking about here is the drama CDs that were released back in 2012. The translation is already on its way, which is awesome~