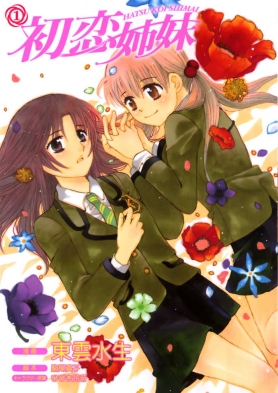 “Well, love between girls is like a fever – it fades with time.” There’s a whole lot of yuri manga with an all-girls school setting out there. Naturally, many of them picture those as a sort-of carefree paradise for young women who love other women. But how many of them do touch the oh-so-delicate topic of such a paradise being only a phase in adolescence? Let’s take a look at Hatsukoi Shimai – a manga that approaches girls’ love in a slightly different way than the majority. 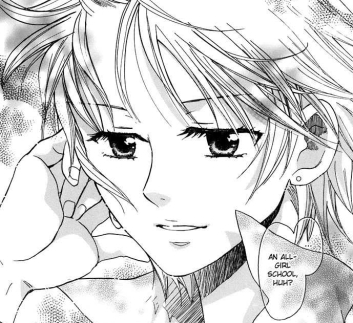 The manga follows the story of Matsuzato Chika – an ordinary middle school student who, in her search for a high school, decides to visit the prestigious Tsunokamizaka Girls’ Academy during its visitors’ day. Swept away by the crowd, she coincidentally meets Kizaki Haruna – an Academy student assigned to take care of her and show her around. Entranced with the school itself, as well as Haruna’s kindness during their day spent together, Chika makes a promise to do her best and get into the school in order to meet the older girl once again. However, during their long-awaited reunion, Haruna acts strangely cold and Chika is yet to discover that reaching her goal has opened a door to something yet unknown to her – her first love.

At first glance, especially in terms of the cast, Hatsukoi Shimaimay comes off as quite similar to other titles with the same setting. The main character, Chika, is a cheerful and somewhat childish girl with an innocent and transparent nature. The first friend she makes in her new school, Kizaki Akiho, is a typical ever-so-optimistic and protective best friend, while a sort-of antagonistic role is given to an arrogant class representative who takes everything too seriously, Teshigawara Chiori. Last, but certainly not least, there’s Chika’s beloved senpai, Kizaki Haruna, who is an almost-opposite of Chika – cool, good at studying, and somewhat mysterious in the way she acts. These four form the main cast for the first volume. I said ‘for the first volume’ because, as the manga progresses, a couple of new characters appear, adding a bit of variety to the mix.

Some at first less significant side-characters will also get their three minutes.

Speaking of progress, the manga itself consists of 13 chapters divided into 3 volumes. One could think it’s somewhat short but make no mistake – the chapters are about one-half longer than usual. I also think it’s worth mentioning that the author of the manga, Shinonome Mizuo (also responsible for the art in the manga version of Princess Tutu), had very little to do with yuri at the time Hatsukoi Shimai was being published. Perhaps that’s the reason why the story plays out the way it does – seemingly stereotypical, but not quite.

As I mentioned at the beginning of this review, the story tackles an important question – is it just a phase? Are romantic feelings between girls really only an illusion that disappears the moment they’re entering the adult world? Obviously the answer to that question can never be a simple ‘yes’ or ‘no’, and the way Hatsukoi Shimai answers it isn’t unequivocal either. In fact, without spoiling too much, it goes as far as show us a bit of both worlds. Although I think I should mention that some answers aren’t as direct as one could expect them to be.

As for the flaws of the story, I would include a sort-of rushed approach towards the building up of the tension or new plot lines being suddenly thrown in, which is particularly noticeable in the case of the side-characters. It’s not bad enough to make things chaotic but, nevertheless, it might take away some of the fun. Some reactions of the characters, while needed as plot devices, may also seem a bit exaggerated, especially when it comes to Haruna. They could still pass as the rough side of adolescence but the story would surely benefit from a more proper reasoning behind them. Then there’s the fact that a different person was responsible for the plot in the first volume while the artist got a free hand in the volumes two and three. It is not especially a bad thing but some plot lines may give the impression of resolving in a different way than originally intended.

Now, it wouldn’t be a proper review without saying a few words about the art. Starting with the good aspects, the backgrounds range from decent to really well-drawn, with a predominance towards the latter. Very few frames come off as empty. Also, fans of shoujo manga-styled flowery scenes will certainly be satisfied as some pages are literally full of them, but never to the point of overdoing it. The characters are detailed, shifting more towards the ‘cute’ side rather than the ‘realistic’ one, and usually look neat and satisfying. I say ‘usually’ because, unfortunately, there are times when the proportions look way off (especially from high angles) or the expressions seem somewhat unnatural. That’s mostly noticeable in the first volume and it should be noted that the art improves greatly in the later chapters which, I assume, is due to the unusually long time-span during which the manga was published (2003-2008). 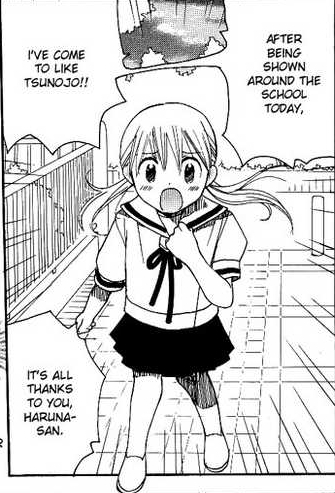 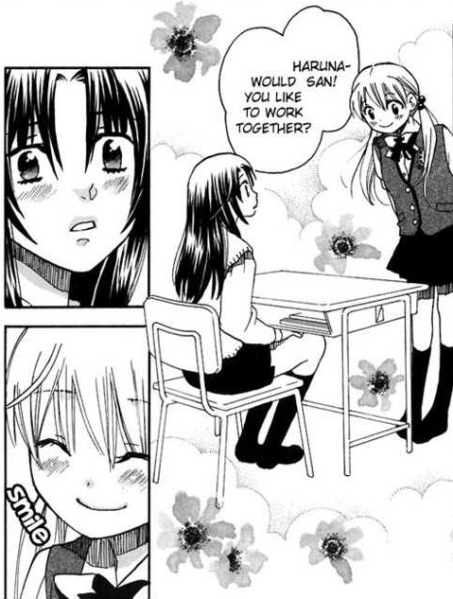 Scenes like this one happen…. Apart from that, the art is pleasant to the eye

To sum things up, is Hatsukoi Shimai worth your time? I would say yes, it is. Despite it not matching up to yuri masterpieces, like Girl Friends by Morinaga Milk or Omoi no Kakera by Takemiya Jin, it’s still enjoyable enough to give you an entertaining evening or two and will surely warm your heart up a bunch of times. It certainly has a special place in mine and I can only encourage you to give it a try.