Story: 9/10 Characters: 9/10
After more or less unwillingly moving into her grandfather’s old house, Aria , the protagonist of the story, starts hearing weird noises. While exploring the house and trying to find the source of these uncanny sounds, Aria and Melody, her best friend, stumble upon an intriguing-looking gem that Aria can’t help but touch, unleashing a sexy demon from another world by doing so. Since Aria and their new demon friend Lyria end up being stuck together thanks to the powers of what is called a Lifelink Stone, the three are forced to cooperate to get rid of the magic that’s keeping them bound together.

First of all, this review is based solely on Lyria’s route, as I didn’t dare touch any other route after experiencing the sheer joy their story managed to make me feel. As much as others might disapprove of this way of thinking, I will shamelessly admit that not even the oh so tempting yuri harem route managed to convince me otherwise. With that out of the way, let’s start with the actual review~

To start things off, let’s just say that this Visual Novel literally blew me away. After having enjoyed what I thought to be the best yuri Visual Novel around right now, namely Kindred Spirits on the Roof, this one came as a big surprise, to say the least. I know, I shouldn’t compare these two, as the only thing they have in common is the fact that they are both VNs that involve girls in love with other girls. Still, in terms of enjoyment, they managed to score quite similarly.

I’ve been eagerly waiting for any type of media that would depict a love story just the way this one does. What I mean is—and many people have even complained about it—that Starlight Vega features the more-or-less typical fantasy romance story that you can already experience in numerous games, and especially anime. Though, at least I can’t think of any time I’ve ever seen something like this with a serious kind of yuri romance involved. So, yeah, this is a rare treat, especially if we take into account that what I just called a typical set-up is easily made unique by adding the option of three very different types of romances, not to mention that we finally get another VN that actually has options that can change the outcome of the whole story.

Also, this one is written outstandingly well. It is very straight to the point, as everything that we could call similar to a filler scene—that just acts to stretch the whole thing a little longer or show the characters doing something unrelated to the actual story—is almost completely missing, especially in the beginning of the story. There is simply no way you can get bored with this, as everything we see is directly linked to either the plot line or to the character’s development, in order to make some romance possible. Well, it certainly isn’t as fast-paced as I might have made it sound. The romance still takes its time, even though Lyria probably wanted to get things going a lot faster. ( ͡° ͜ʖ ͡°)

It’s the way Lyria goes from totally flirtatious to dead serious when talking about her feelings and desires, the way Aria just slowly realizes that she enjoys Lyria’s company more than she would like to admit, the way they unknowingly comfort each other by spending nights together in each others arms…. Everything I ever wished to see in yuri media is compiled into the story of these two characters. And what is even more amazing is the fact that the most powerful scene for me in this entire Visual Novel is neither their first kiss, nor is it their first time, no. It’s a scene in which they don’t even really spent any time together. What I’m talking about is the scene in which Aria and Melody, so to speak, take a peek inside Lyria’s mind, finding out about some of her most important and happy memories — all involving Aria.

Needless to say, the romance was the one thing I enjoyed the most, even though the story itself was pretty intriguing as well. And I yet again feel like this type of plot is capable of having both a prequel, as well as a sequel. I would most certainly want to get both~

Well, the only thing I feel like this Visual Novel is lacking is a, let’s say, more satisfying conclusion at the end of it. Maybe the other routes did a better job, but the ending for the Lyria route felt rather cut off, like their story in Vega was just getting started, and yet it was already over. What also bothered me is the fact that it didn’t quite feel like the right kind of ending. What I mean is that it all appeared to be a happy ending, with them almost shrugging off the problems that had previously built up. Aria was openly addressing that she was missing her home and friends. She doesn’t really have any friends in Vega, nor do the people there approve of humans in any way. Even though it was her own decision, she is left more or less alone with just Lyria around as the only person she would actually enjoy spending time with. And if that wasn’t sad enough, their final act showed them expanding Aria’s life even more, so she could spend even more time trapped in Vega. Well, maybe I’m on my own with this opinion, but I was really hoping for some type of conclusion, as in Aria finding a way to actually visit the human world every now and then, but oh well.

Art: 8/10
As for the art, I really enjoyed what I saw. Some of the background pictures were really outstandingly beautiful and fit the whole feel of this Visual Novel perfectly. The characters as well looked really nice, especially Lyria~

I guess I would have liked to see some more of these beautiful-looking event CGs, though the ones we already got are satisfying enough.

Sound and Music: 7.5/10
We didn’t get any voice acting in this one, which I found to be a surprisingly good thing. I’m extremely biased when it comes to this, so the only voice acting I can truly enjoy is professional Japanese voice acting. That’s why I think that if they had gone with English ones, I would have either muted them or turned the volume down so low that I’d only be able to make out the emotions the spoken words carried.

As for background music, they didn’t lie when they said they’d have a professional soundtrack awaiting you. I especially enjoyed the slower tracks~

Yuri: 10/10
Well, as already mentioned somewhere above, there are three different routes that allow you can basically pick which girl you want Aria to be with, be it Lyria, Melody, or Scherza. Also, you can get a harem ending if you make the right decisions, and that might be a pretty damn great addition to a lot of yuri fans.

Since the game is fully yuri, and even involves some pretty awesome scenes showing the characters kiss or go even further, this deserves nothing less than a perfect score here. 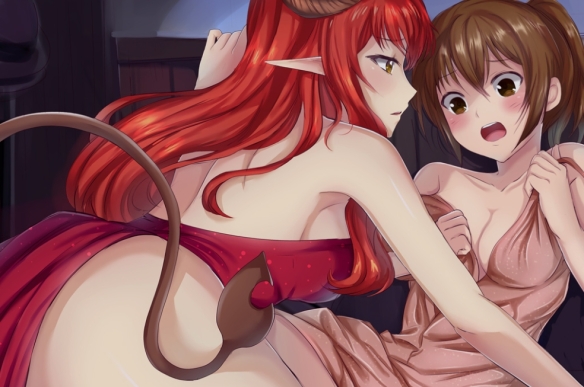 Total Enjoyment: 9/10
Despite the slight problem I had with the ending, this Visual Novel right here is still nothing short of amazing. It has great art, a great story, and best of all, the most satisfying romance I’ve come across in a long, long time.

If you’re interested in buying this game, you can do so right here.