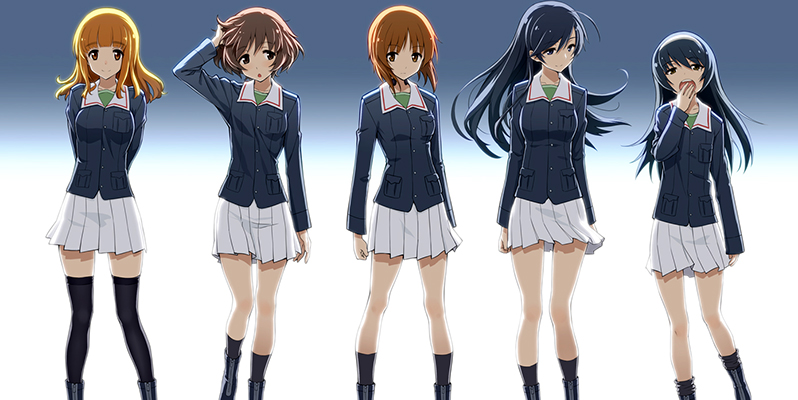 When you think of the armored death machine known as the tank, you can’t help but think of high school girls. Okay, that’s probably the last thing you’d expect, but that didn’t stop Japan from basing an anime series around that novel idea. As Girls und Panzer shows, maybe they were on to something….

Despite the fact that her family has a history in panzerfahren, Miho Nishizumi no longer has any interest in it. Due to the fact that they don’t have a panzerfahren course, she enrolls at Oarai Girls High School. So imagine her dismay when the Student Council tells her that the Ministry of Education has ordered high schools and universities throughout Japan to strengthen panzerfahren education. You see, the panzerfahren world cup is taking place in Japan in a few years, so a proactive approach is being taken to ensure success. Miho has desperately tried to avoid a situation like this, but now that it’s a required elective, how will she deal with the sticky situation? 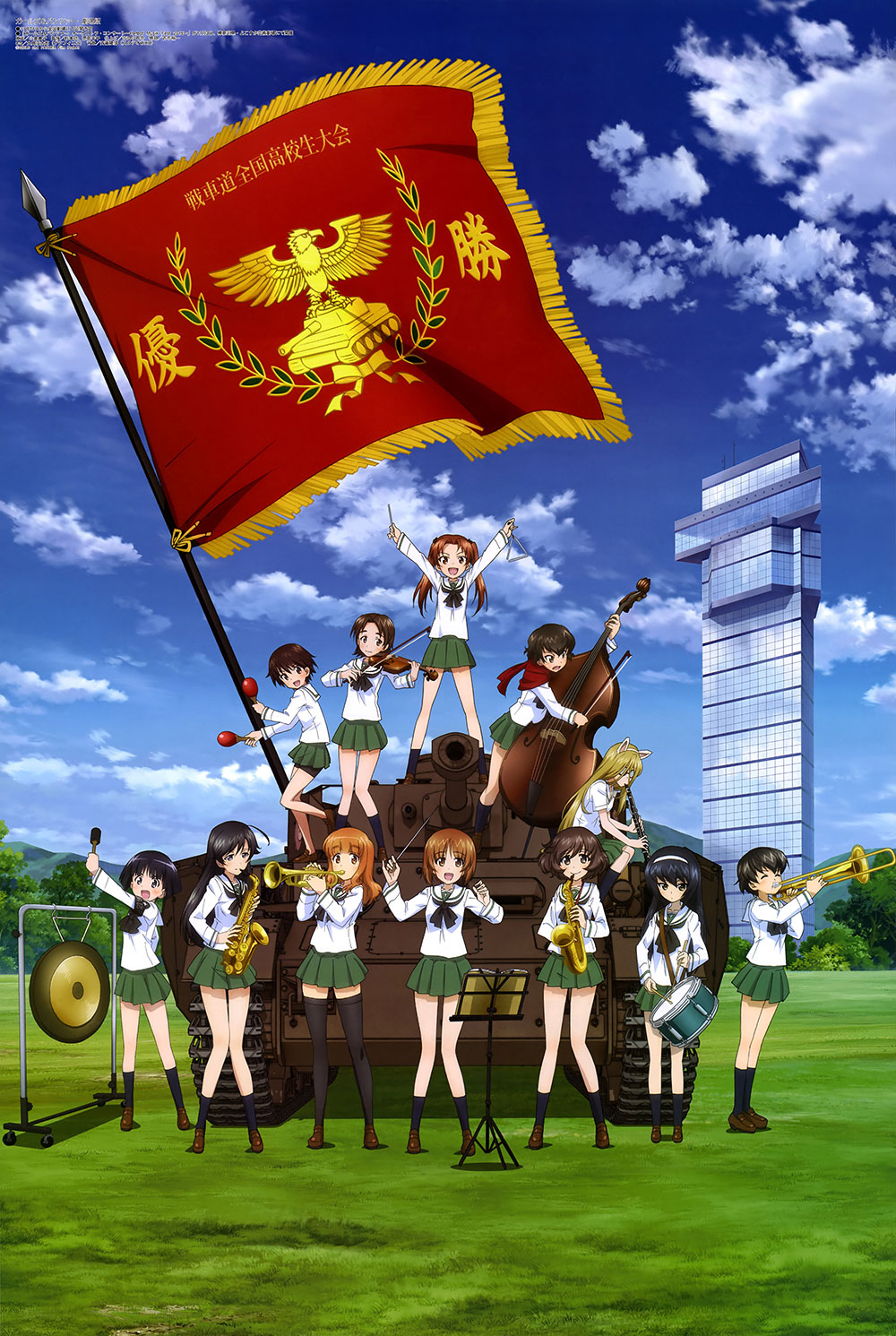 To me, slice of life anime are enjoyable, but after a while, it often starts to feel as if I’ve already seen all of these shows before. After all, you can only have so many shows taking place in school before it just gets tiring. Thankfully, Girls und Panzer isn’t exactly your typical slice of life, and the tank action adds plenty of excitement. There’s a surprising amount of combat, and even though it’s not overly extraordinary or anything, it serves as a welcome change-up from what we might normally get from shows like these.

Like a lot of anime, you can just go ahead and throw logic out the window. “Why is this school situated on a giant aircraft carrier?”, “Why are these girls sticking their heads out of the tank with live rounds exploding everywhere?”, “Who lets teenage girls commandeer tanks without adult supervision?”; like many other mysteries, there are no answers to these questions. All that said, these are some of the headscratchers that add to the entertainment factor and make this more interesting than it sounds.

Even with the inclusion of tank fighting, the plot feels familiar in certain ways, yet it’s still pretty entertaining, so I’m not complaining~

Miho, Saori, Hana, Mako, and Yukari form the main group of girls, and while they’re a fairly nice bunch, I felt like Miho and Hana didn’t contribute as much entertainment as the other three did. Miho’s your stereotypical main character, and even though she’s a tank wiz, I just plain didn’t find her as interesting as many of the other girls in this show. Hana is similar, but I’d almost go as far as to say that I found her borderline boring. Saori was a bit more charismatic, even though she fell well short of the remaining two main characters, Mako and Yukari.

Yukari’s the resident tank fanatic whose extreme enthusiasm brings some excitement to the group. She’s perhaps the most colorful of the main girls, and when you throw Mako into the mix, things get even better. Due in no small part to her perpetual sleepiness and overall disdain for mornings, she’s my favorite character. Her pessimistic attitude is easy for me to like, and she certainly helped to improve my impression of the main group. 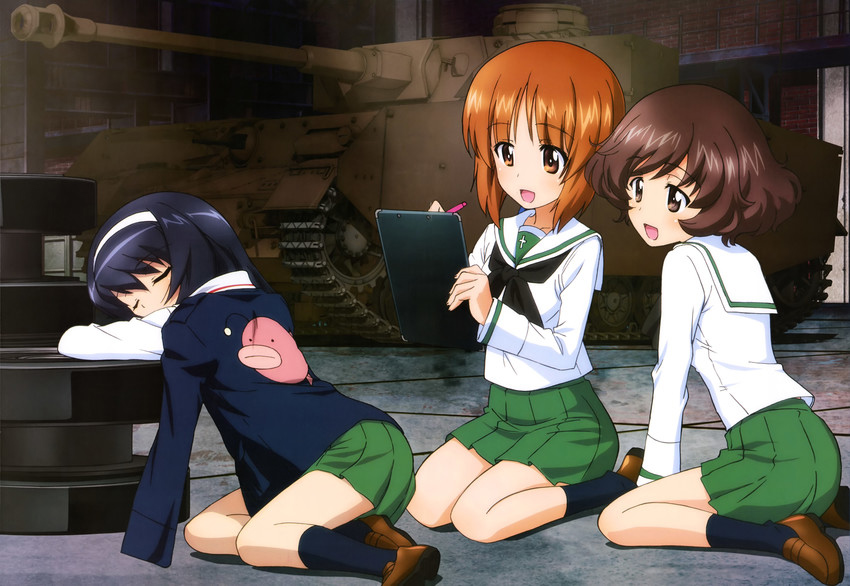 There’s some good and bad mixed in there, but where Girls und Panzer really comes up aces is with the many memorable supporting characters. Anzu, Erwin, Katyusha, Kay, and Momo are a few that stood out to me; and they’re a big part of why I enjoyed the show so much. They don’t get as much screen time as the other characters, but they definitely make the most of their opportunities.

Despite the fact that the tanks are rendered in CG, I don’t think things look especially awkward or too out of place amongst everything else, most of the time. The many panzer battles wouldn’t look out of place in a more serious military action anime, which speaks well of how the scenes were handled. It’s not the best-looking anime you’ll ever see, but the visuals are sufficient enough to get the job done.

^^ Besides the catchy themes, the music has a nice militaristic vibe that fits in perfectly with this show. A very nice touch was the inclusion of military-themed songs that represent the various schools. The Battle Hymn of the Republic was great to hear, but undoubtedly, my audio highlight had to be Katyusha. Having Katyusha and Nonna actually singing it was great, even though some native Russian speakers might complain of the tiny tyrant’s performance. Nevertheless, that song is probably something that will stick with me for quite a while. The music, in addition to some quality voice acting and tank sound effects, helps make for an overall solid listening experience, in my opinion.

Like Binbougami ga!, Kill la Kill, and other shows that have received reviews here, there isn’t any actual yuri in this anime. Yeah, I know. The reason this is getting a review in the first place is because it’s so easy to ship the various girls with one another, which harkens back to the final type of yuri. Miho x Yukari, Mako x Sodoko, and Katyusha x Nonna are but a few of the possibilities that aren’t too hard to imagine. It’s obviously not all that much, but it is something, I guess.

Sitting in a sweet spot as an action-heavy slice of life anime, Girls und Panzer has the military chops to appeal to action fans, all the while keeping a strong cute girls doing cute things vibe that blends together quite well. 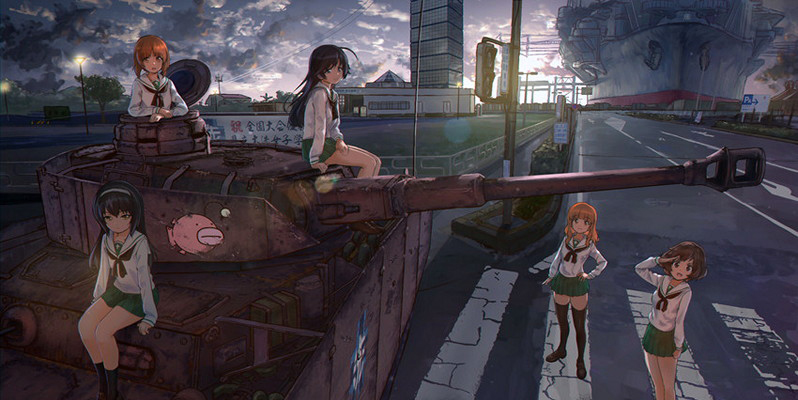