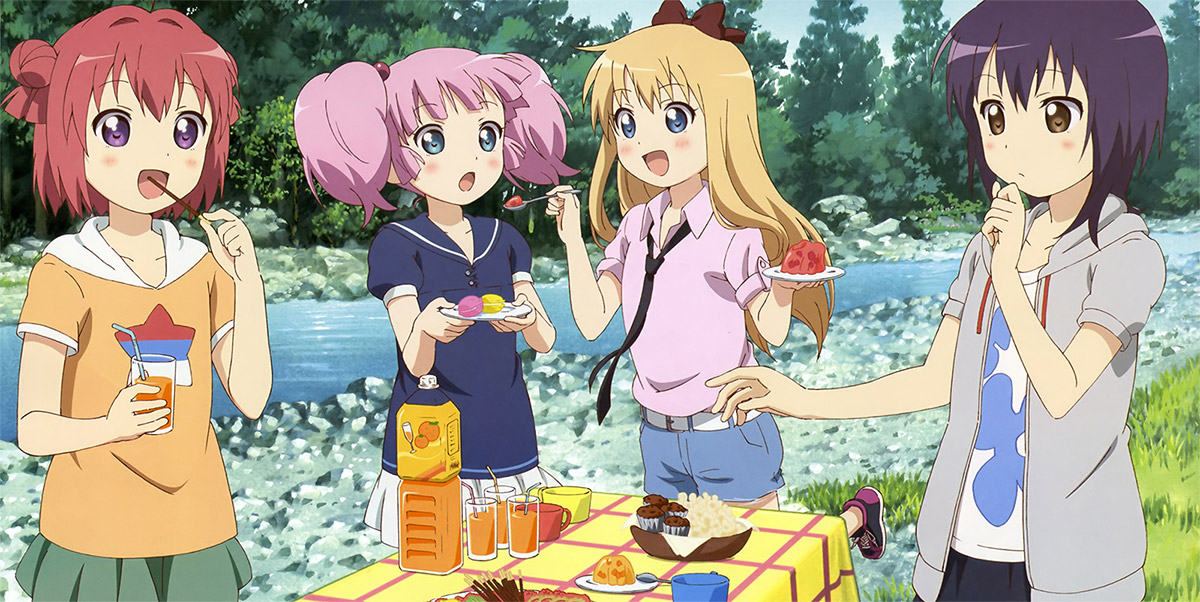 The Yuru Yuri review train rolls on with this double dose of Nachuyachumi!. Who would turn down spending even more time with Kyouko and the rest of the girls? Not me, as this review will attest to~

To say that Yuru Yuri isn’t known for its story is an understatement, but Nachuyachumi! actually had a legitimate premise. After the girls find camping supplies in the Tea Ceremony Club room closet, they decide to all go out on a camping trip together. Now, this is only the Amusement Club and the Student Council (sans Rise), so only the most important girls are featured in this OVA. The basic premise doesn’t sound that different from many other slice of life anime that feature camping episodes, and it’s not. That said, the personalities of the girls shine through, and this is still pretty entertaining. A test of courage, bath house romp, and outdoor cooking scenes all appear, and bring with them some enjoyable moments. For a good portion of the OVA, things are more laid-back and easygoing than they are in the main series, and that’s a bit different, though it doesn’t stop me from liking the air of calmness about it.

Nachuyachumi!+ was more akin to the previous seasons, in that it’s all about the girls finding various ways to pass the time. Water balloon fights, playing video games, eating, and just hanging out were the order of the day, so this wasn’t quite as eventful as I would have hoped. Also, split into two groups of four, the Student Council group wasn’t as interesting, since Sakurako was uncharacteristically kind and Kyouko was never really brought up around Ayano. The amount of yuri in this particular OVA was also less than Nachuyachumi! and the two seasons, so that’s one less thing to fall back on. The gaming moments were amusing, despite the faux Animal Crossing scene lasting too long, in my opinion. All in all, this second OVA seemed like more standard slice of life anime, which isn’t bad, but isn’t what made me come to like the series more than most other shows in the genre.

Between the two of these, there were some funny moments, though I certainly enjoyed Nachuyachumi! more. I probably wouldn’t enjoy the series as much if it were as relaxed as these two OVAs, but as kind of a one-off, I don’t mind too much.

Chinatsu’s explaining that if anyone gets close to Yui, she’ll cut a bitch.

As much as I like some of the side characters, I’m glad that the focus remained on the eight main girls. When there’s more time, bring on the others, but for now, this was probably for the best.

If it’s even possible, Akari was even less visible than before, which is kind of unfortunate. At least before, she was constantly being poked fun at, but for some reason that decreased, so she might as well have really been invisible. Thankfully, the same can’t be said of Kyouko. She didn’t miss a beat and was easily one of the highlights of these OVAs for me. Yui was as calm as ever, which is a word I wouldn’t use to describe Chinatsu. During the first season, I wasn’t the biggest fan of Chinatsu, but over time, she won me over, and now, I can say I’m a fan of hers. It’s undoubtedly thanks to all her yuri moments, which is why she needs even more.

Seeing Sakurako actually being nice to others was a huge change, and if that wasn’t enough, she was even nice to Himawari! She’s still seems like who we remember her as, so Himawari has plenty of opportunities to keep her in check, but for my tastes, they could use some more dysfunction. Neither Ayano nor Chitose were that great in Nachuyachumi!+, though they were both much more prominent in Nachuyachumi!. How are we supposed to get more Ayano x Kyouko when they don’t even see each other for an entire episode? Anyway, I would have liked some more memorable moments involving them, particularly in that second OVA.

So, Akari was more lackluster than I remember her—and Sakurako may finally be growing up—but other than that, pretty much everyone else reminded me why they’re such good characters. I could have used a tiny bit more Chizuru drooling and Akane siscon moments, but, oh well.

In case you’re not aware, in-between the second season and Nachuyachumi!, there was a change in the main studio behind Yuru Yuri. Doga Kobo was out, and TYO Animations was in. Like many people, I’m sure, I had become used to how the characters looked before, so seeing the updated versions felt weird. It’s not like there were radical changes or anything, but for me at least, it took a little time to get used to. I’m still a bit partial to the classic designs (which I think were cuter and more moe-like), though, I’ll admit that everything else seemingly looks a bit better here. Specifically, one instance in which the studio switch paid off was with the many shots of Mother Nature. The foliage and landscape are definitely a cut above past seasons, even though it had been almost three whole years since the premiere of season two…. Nevertheless, the studio shake-up was a big change, yet it wasn’t that bad a switch and even produced a little bit of eye candy, so I’m generally okay with it.

First off, the opening scene of Nachuyachumi! (with all that Engrish) was probably the single most glorious moment in the history of anime. Alright, that’s not true at all, but where the hell did that come from?!?! Personally, I loved it and thought it was hilarious. My Japanese is a million times worse than their English, so I really can’t say anything bad about it. Other than that, what else is there to say about the sound? The themes were okay, I suppose, with Nachuyachumi!+‘s OP being the most memorable for me, but I can’t say I loved any of them. The look of the series may have changed somewhat, but the sound is just as familiar as before, so let’s move on already.

Since they don’t so much as see each other in the second episode of Nachuyachumi!+, it’s great that Kyouko and Ayano had a few moments during the remainder of these OVAs. It’ll probably never be as much as I would like, but thank goodness Chitose came along and provided a few more yuri delusions. The teasing of this potential pairing is torture, and if that’s true, then I’m truly an M, because I just can’t get enough. That said, I’m not against Kyouko making unsuccessful passes at Chinatsu, yet those didn’t really happen.

There needs to be a Kickstarter campaign to get this delusion expanded into an actual OVA!

Not to be outdone, Himawari and Sakurako were still the pairing that was up front and center. For the most part, the two of them seemed to get along much better than they did in the first two seasons, and that was incredibly surprising to me. I don’t know what it is, but I prefer their back and forth bickering, so at times, this felt like a bizarro world of sorts. Something else that was conspicuously missing was boob jokes. I think there was only one, but that’s nowhere near enough. I just want Sakurako to call Himawari “cow tits” and for Himawari to slap her… and then they have a make-up makeout session. Is that really too much to ask?!?!

Between the two aforementioned pairings, as well as Chinatsu’s undying love for Yui, the light yuri the series is known for is present and accounted for. To me, the yuri content didn’t seem like as much as the prior two seasons (especially in Nachuyachumi!+)—so I was a little disappointed in that regard—but since they didn’t totally forget about Ayano x Kyouko (in Nachuyachumi!), I can give it a pass.