It’s that time of the year again, so enjoy our final thoughts on the spring anime season that just came to an end~

This is unfortunately the only show I didn’t drop this season (Lena speaking), so I guess this is already proof enough of how much I liked it.

From opening to ending, all episodes through, this show never ceased to entertain me with its great action scenes, its lovable characters, and the endless struggle of our main character, Midoriya, to achieve his goal.

Well, I guess Midoriya was a little too whiny at times, and Bakugou, in contrast, a little too angry and annoying, though they kind of had some very weird chemistry going on that makes me want to ship them. Weird, isn’t it? They don’t even go well with each other, and on top of that, they are two guys, though I still can’t help it….

Seeing as how I found the three main girls to only be mostly average to slightly-above-average characters, the most entertaining things for me in this show might’ve been Hibiki and Ren. The yuri thoughts that Hibiki occasionally had were cute, even though Ren didn’t notice them at all. There wasn’t much—or really any— yuri in the other shows that I watched this season, so this subtext was greatly appreciated. Considering the lack of other important characters, they should have had more yuri moments, but I guess the characters aren’t the only ones unlucky here…. Speaking of that, when nothing unfortunate was happening to the main trio, the show was decidedly less entertaining for me. It’s just fun seeing An getting attacked by cuddly critters, Botan injured in the most improbable ways, and even Ruru’s forbidden love for an inanimate object wasn’t too bad either. Things picked up towards the end, so this wasn’t the case any more, but for a while there, I wasn’t too thrilled with this show.

So Anne Happy♪ probably won’t make anyone forget about the better slice of life anime out there, but it was a decent watch that had some amusing moments throughout. 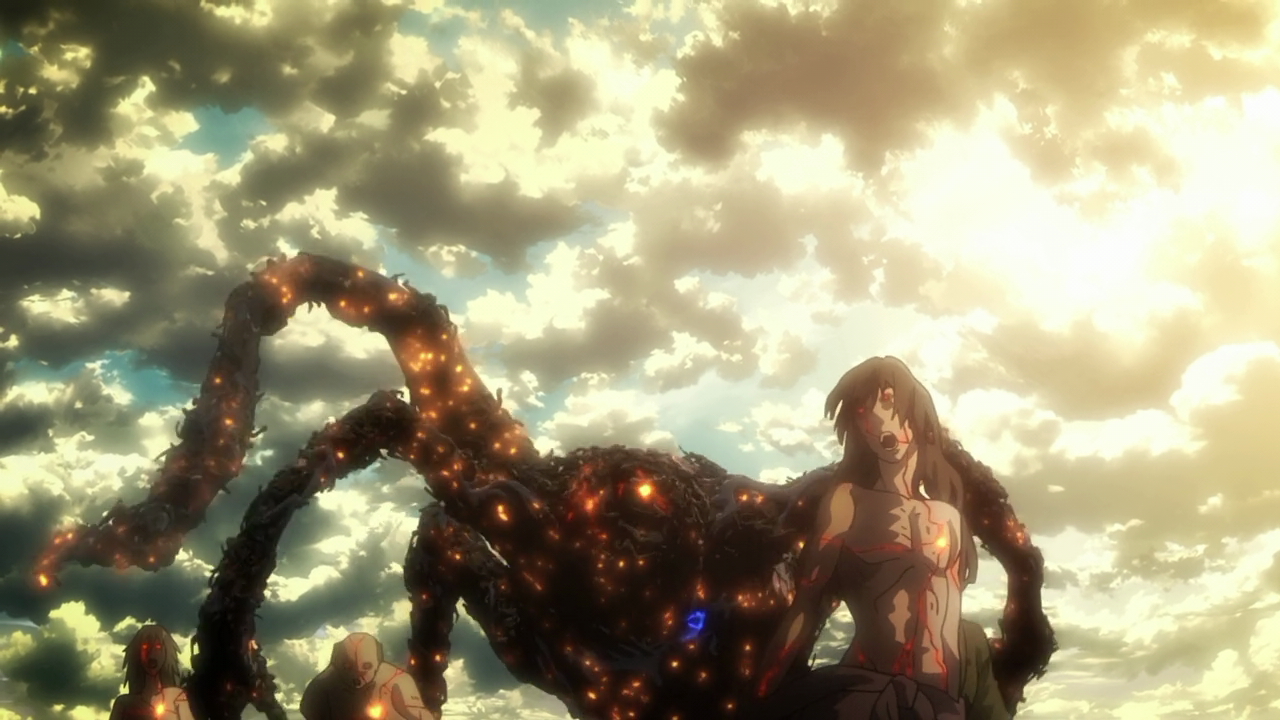 Since they’re ridiculously similar, it’s impossible not to compare this to Shingeki no Kyojin, but for me, this never really measured up. The characters weren’t anywhere near as interesting or likable, there wasn’t quite the same level of drama, and I just wasn’t as emotionally involved as I was in SnK. Once Biba showed up, things started going downhill, so I wasn’t a huge fan of the story after that point. Nevertheless, I can’t say that this anime wasn’t pretty entertaining.

So maybe it wasn’t SnK-level awesome, but this was still enjoyable. Now that we’ve had the appetizer, it’s time to start getting ready for the main course…. Bring on the Titans already!

More monsters, more low-budget production values, more moderate enjoyment. The previous season aired just a couple of seasons ago, so this is more like a split-cour than a real second season, but whatever. This installment brought with it some new developments in the story, but it still felt like it could’ve passed for a bad survival horror game.

Personally, I liked this a little bit more than the first season, but I guess that’s not saying too much. Since I’m into monsters and such, I probably liked this more than some people did, but I didn’t quite like it enough to want another season of it. Kagewani: Shou was a decent little diversion that had a few interesting moments, though I’m still longing to see a new horror series that’s really worth watching.

Kiznaiver had an interesting hook—a group of characters bound by their wounds—but I think the story was a little disappointing to me. For nearly the first two-thirds of the season, there was little in the way of actual story progression, and it felt like things were going nowhere. Okay, that’s not totally true, as there was some (plodding) character development, with the focus mostly centering on their various hang-ups and how the experiment that they’re involuntarily undergoing is affecting them. That wasn’t that bad, and became much better in the final third of the season, but waiting that long wasn’t fun. At least some of the characters were interesting, but I don’t think that includes all of them.

There was a brief dose of yuri, but Honoka’s fleeting relationship with her old friend didn’t last long and never truly got off the ground. Nevertheless, when the story got going towards the end, this was a competent drama, even if that drama felt somewhat forced at times.

I wanted to try and take this anime seriously, but after awhile, it was apparent that I just wasn’t going to be able to. So many of the characters and situations are ridiculous, but at least this served as some decent comedy, so it wasn’t a total loss. By the time that one character was literally tormented by the giant breast implant, I just lost it. I’m not exactly sure that Mayoiga is actually in on the joke, but either way, this was bad.

By just shutting off my brain and enjoying the ride further down into the rabbit hole, this became a guilty pleasure that was far more enjoyable than it should have been. It still wasn’t good, but at least it was watchable, even if for the wrong reasons.

The mangaka behind Pan de Peace! is also responsible for a couple of hentai manga, and that may be the most interesting thing I have to say in this brief summary. This was largely forgettable fluff that I didn’t find that entertaining, but at least it was only three minutes per episode, so it could’ve been worse. I wouldn’t say it was very funny, and I don’t think the characters were that interesting, so this is essentially the definition of generic slice of life anime. Noa’s disgustingly cute appearance was the highlight for me, though the very occasional light yuri moment wasn’t that bad either. All in all, this ended up being a halfway decent little time waster, but nothing more.

Not too long ago, there were beer commercials featuring “The Most Interesting Man in the World”, and if those ever come back, I vote that they star Sakamoto. Even though this wasn’t the most hilarious show ever or anything, it’s funny how scenes and situations that, on paper, probably didn’t have any business being entertaining, ended up being a blast, thanks to him. After a couple of episodes, I was a little worried that this might become somewhat repetitive, but for me, that wasn’t the case at all.

Despite not really having much of an overarching plot, there was more than enough variety and clever maneuvering on Sakamoto’s part to keep things fresh and interesting, and I’d highly like to see another season come our way. After all, can you really have the cool, cooler, coolest character around for only one stylish season? I surely hope not.

Sansha Sanyou was similar to Anne Happy♪ in that they’re two slice of lifes that had their moments, but this one ultimately left me feeling somewhat empty. Like the previously mentioned Anne Happy♪, I was lukewarm about the main trio of characters for a while, but as the season went on, I grew to like them a bit more, yet they were still kinda bland. As for the supporting characters, Yuu single-handedly made me hate my existence. Most of the other characters weren’t that bad, yet when that snot-nosed kid was introduced, I let out an audible sigh and knew that I was going to hate watching him. Unfortunately, Kou’s cooking didn’t give him life-threatening food poisoning, though I prayed endlessly for it to happen. And speaking of food, that was a bit of a running theme, so the show reminded me a little bit of Pan de Peace!. It’s nowhere near as bland as that, but I could see a minor resemblance.

If someone were to ask me for a good reason why they should watch this, I wouldn’t exactly have one. To me, there’s just not a particularly strong selling point to be made here. If you’re a fan of cute girls doing cute things, this might be of interest to you, although it’s nothing that hasn’t already been done and done much better.

With nods to some of their past works, this felt like an ode to hardcore Trigger fans who may have been disappointed with some of their other post-Kill la Kill offerings. The unique brand of action and comedy that Trigger is known for was on full display with this anime, and even though the episodes were only eight-minutes long, that was enough time to make this one of the more enjoyable shows that I watched this past season.

I also need to mention how great the ED is. Seriously, as fun as the rest of the show is, I was always looking forward to hearing it at the end of every episode. Kudos all around.