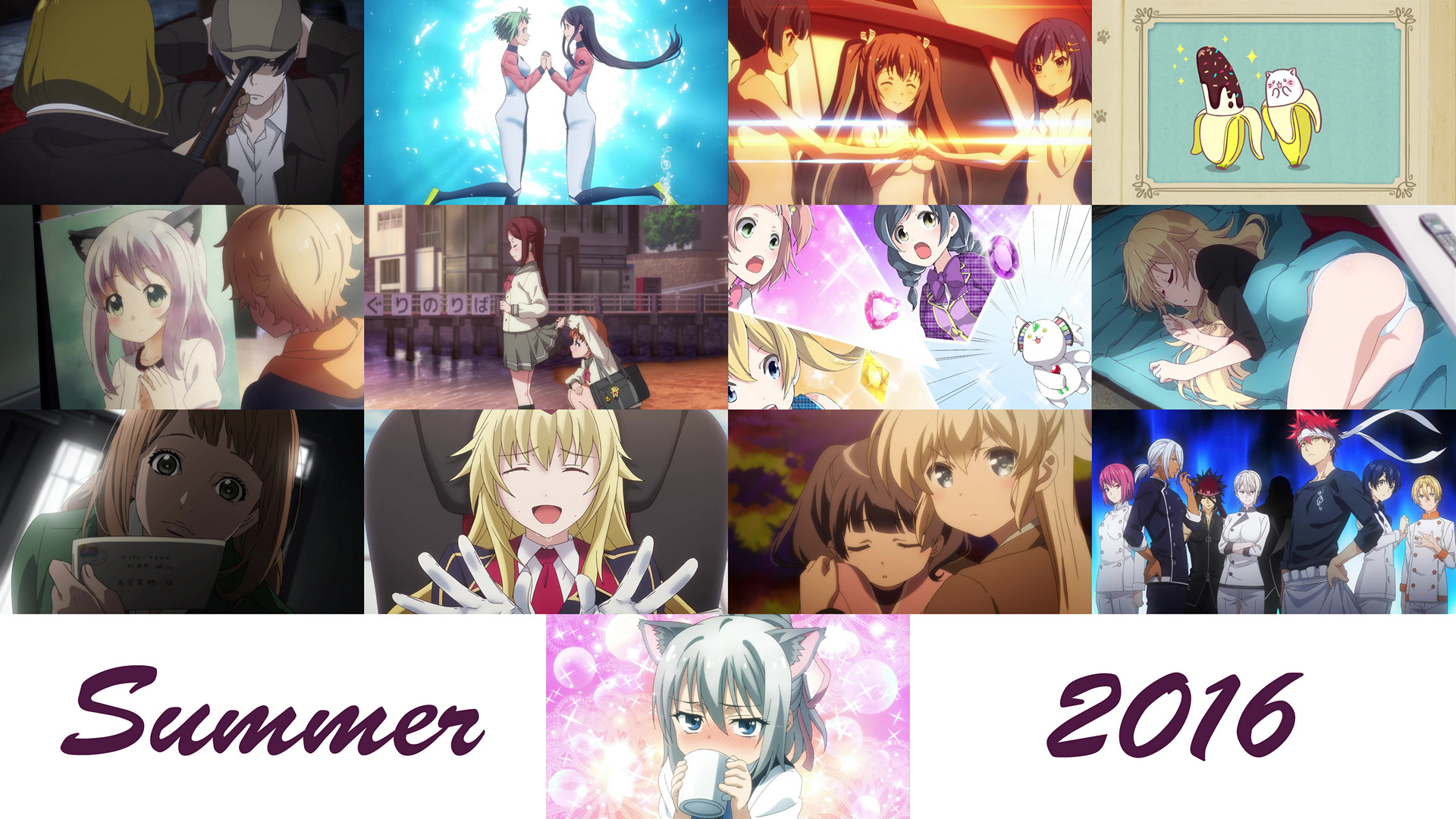 It’s that time of the year again, so enjoy our First Impressions of the summer anime season that just started~ 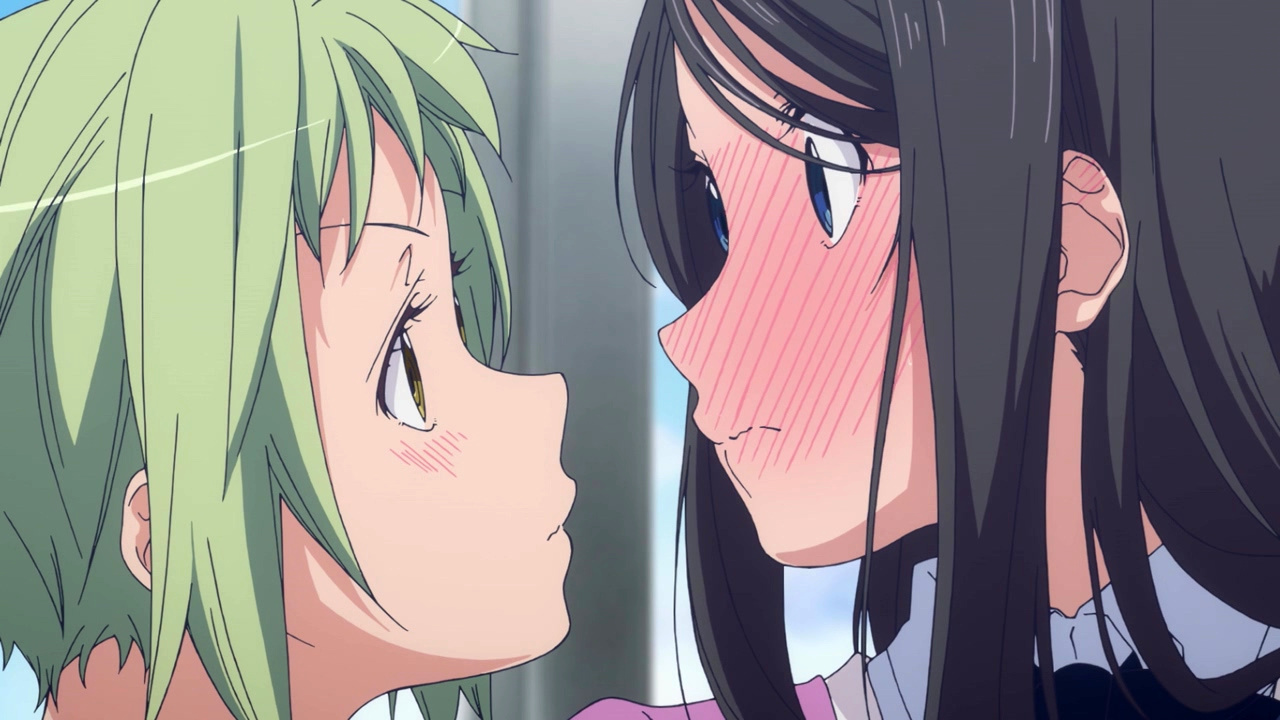 After having read the description of this show, I bet a lot of us had our hopes up for at least a little yuri subtext. Having watched the first episode now, I think that’s actually not all we might be able to hope for. The whole set-up of how the two girls meet reminds me so, so much of the typical girl x girl encounter you can find in numerous other yuri shows and especially in manga. Long hair swaying in the wind, the two meeting by the ocean, ending up in the same class, and sitting right next to each other…. Yeah, that really sounds like the start of a great “friendship”, one where I can totally see Futaba developing feelings for airhead Hikari in no time.

Though, how far will this show go showing us their relationship? It’s not described as a yuri show, though neither was Madoka, and see how far things went in that one. So, yeah. I have my hopes up, and I sure hope they won’t disappoint us!

I usually don’t go for mafia stories or any of the sort, though, just the look of this one got me interested enough to try out the first episode, and I don’t regret it one bit!

I love the dark atmosphere, the seemingly psychopathic main character (maybe he’s not though), and especially the music underlining the whole show so very well. The overall pact seems to be just about right for me to enjoy this one, despite not being that interested in what the plot description actually told me to get ready for.

Well, let’s just hope things will stay as interesting as they were in the first episode, because if this show continues on like this, I can easily see this becoming the hype show of the season.

Is it just me or did this season of Love Live! boost up the wacky level by at least 80%? I mean, seriously now, other than Honoka 2, we got a way too easily embarrassed Nico clone, foreign girl with dubious accent, and my favorite of them all, a tree-climbing alien from Planet Weirdo.

Yeah, I know, Love Live! is supposed to be wacky, though this new level hit me hard. Other than that, it’s very much just like the first season, or that’s how I see it, after only having watched the first episode.

Though, how far will this show go showing us their relationship? It’s not described as a yuri show, though neither was Madoka, and see how far things went in that one. So, yeah. I have my hopes up, and I sure hope they won’t disappoint us! 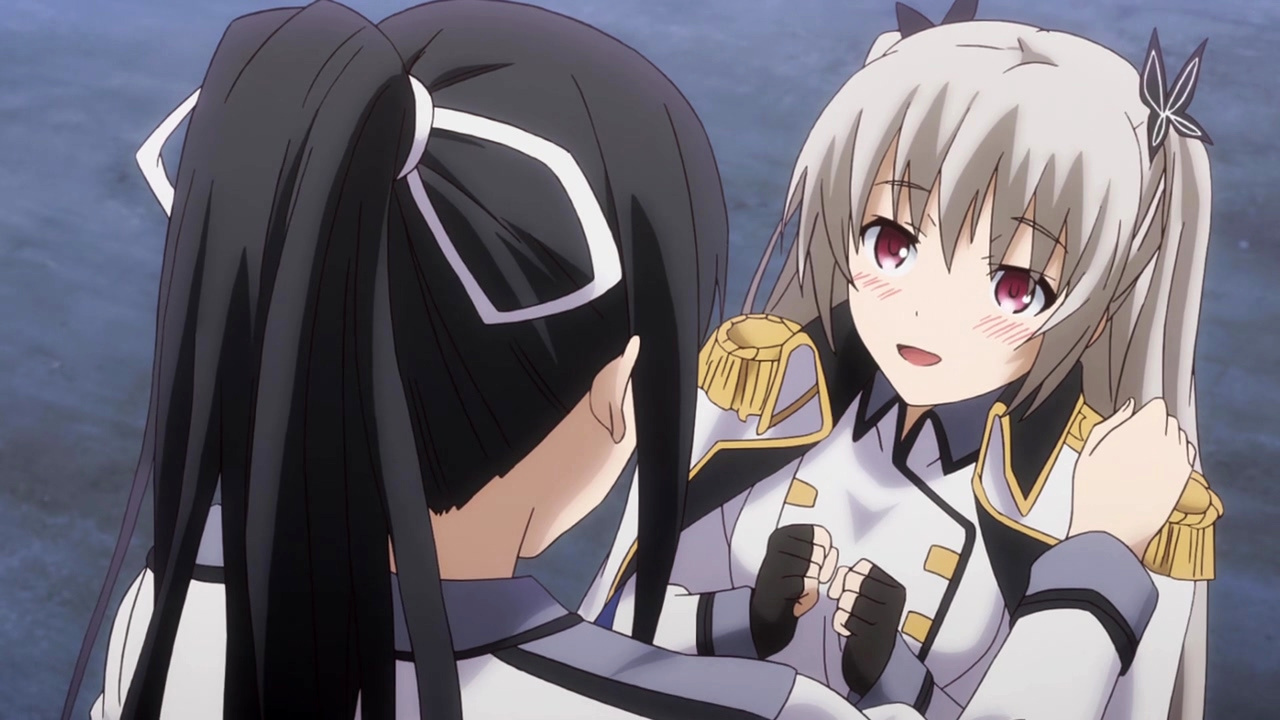 Okay, so the plot is as expected, mysterious object, probably some kind of aliens attack and try to destroy earth for whatever reason. Yet, there are kids, or in this case, teens, with special powers protecting it. Yup, I bet you haven’t heard that before.

So, yeah, the plot is not that interesting to say the least, though someone on Twitter convinced to to watch it, since it might have some Yuri between the two ladies Maihime and Hotaru you can see in the pic above. To be honest, despite really despising the male lead, Ichiya, so far, these two really make a difference. They go really well with each other, from what I’ve seen in the first episode alone, and if there’ll actually be some subtext, that’s probably going to be really awesome as well. In general, this show gives off a really nice vibe, thanks to some of the characters, and I guess that’ll be the main reason for me to continue watching. 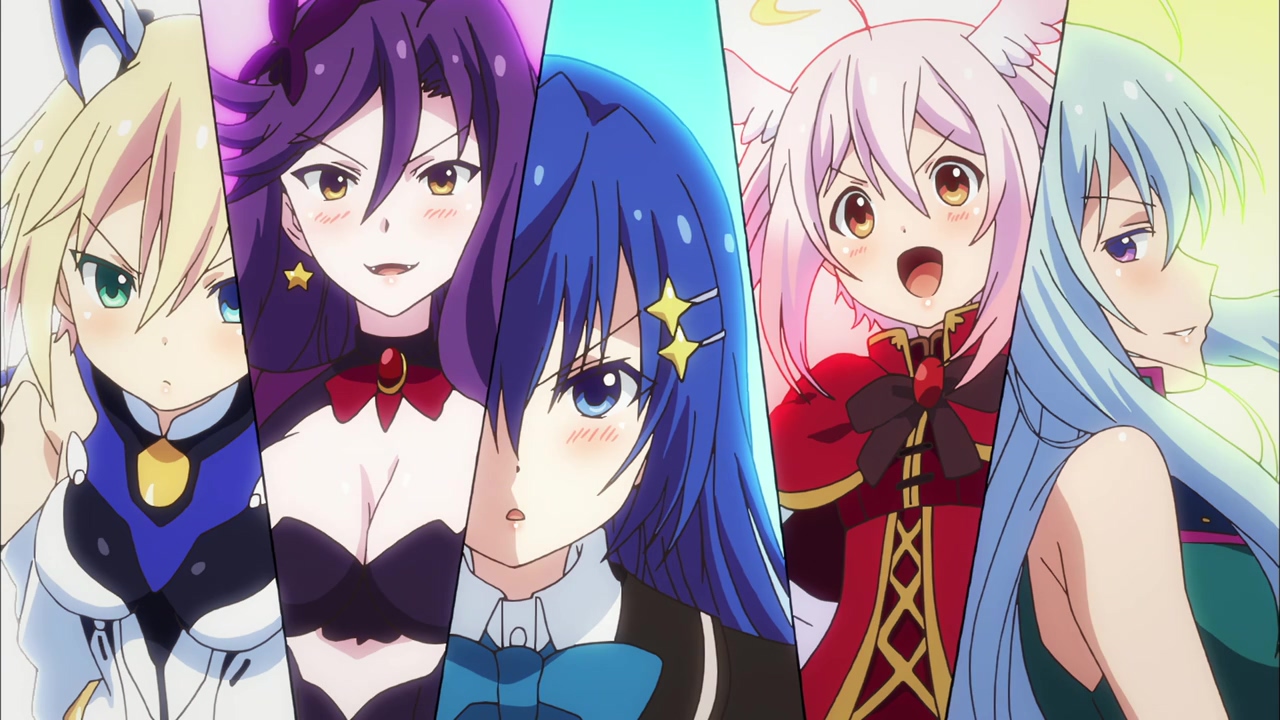 I went into this one without having any expectations, since just like so many other shows of this season, this one comes with exactly the same plot that has girls fighting evil. Though, this one is a little different, since it simply doesn’t involve any male characters. Well okay, this doesn’t make it that special, but it sets the bar for potential yuri content quite high!

So despite the first episode not really featuring any yuri, what it did feature was numerous girls being naked, bathing together for at least half of the whole episode. The rest was dedicated to them fighting, in skimpy clothing to be exact. So yeah, if you’re a fan of that, this is your show. I’ll just stay to see the inevitable yuri take form, and trust me when I tell you, it will eventually happen, we all know it.

Remember when I said that the plot of this one reminded me a little of Kannazuki no Miko in our first post about the current anime season? I actually stated that it might turn out similarly, but without the yuri. Well, after having watched the first episode, we might actually get our hopes up for more yuri then initially expected.

The story so far doesn’t really give away much, and I’m still kind of unsure of what to expect in the next few episodes. Though, the yuri content was already so high that I can easily see past that flaw. Hell, even the fact that I don’t enjoy mecha anime at all is something I can simply see past, if this show does in fact prove to have as much yuri as the first episodes tries to make us believe.

Having loved the first season of this appetite-evoking foodie anime, I, of course, had to continue watching to see what else I could try cooking, yet completely fail at.

The first episode, however, was not quite what I was expecting. The show immediately got back into full story mode, not even giving us any time to breathe and get ready for the new season at all. Thus, the first episode feels way too fast-paced, with a plot that could have easily passed as a season finale. I have no idea why they didn’t just start off a little slower and simply end the episode on a cliffhanger, instead of handing out a rollercoaster ride of a first episode that surely won’t get many new viewers interested, since they had no chance of getting anything that was going on. Let’s just hope that things will slow down a little from here.

Just when you thought you had seen it all, Japan stays true to its reputation and gives us something like Bananya. I had seen the little plush toys featuring this cat who lives in a banana before, but I never would have thought in a million years that someone would make an anime based on it. That just goes to show what I know.

Early on, there doesn’t really seem to be anything more to this show than marveling at how cute Bananya is, but that’s enough for me, because this is just surreal fun. Each episode only lasts three minutes, which is a travesty. I want a full-length anime with Bananya and his banana cat friends doing all sorts of cute things together! Until that day comes, I’ll just be content watching these shorts.

So the next time you buy some bananas, beware! You just might end up with a litter of adorable banana cats~

Basically, this anime is the age-told tale of a girl who secretly likes a boy… who not-so-secretly (and exclusively) likes 2d girls. Yeah, it’s not exactly Romeo & Juliet, but this isn’t the 16th century anymore, so get with the times, people!

This all takes place in an art club, so it’s super convenient that the main male character can just draw his own waifus…. For a comedy with some romantic aspirations, this is a fun scenario, and it helps that I’m also liking the cast of characters, especially Mizuki x Uchimaki (yeah, I already ship them). To be honest, when I first picked this up, my hopes weren’t all that high, but so far, I think this has been a pleasant little surprise. If things can keep going the way they’ve been going, this might end up being a pretty good romcom. Here’s to hoping.

Simply put, this is the worst anime I’ve ever seen. Granted, I’ve only watched the first episode so far, but that’s more than enough for me to confirm that statement. Visually, this looks like a really poorly made MMD video and almost the entire episode consists of nothing more than inane banter between the characters. This was probably done to try to inject some character into the show, but it’s just very annoying to sit through. There’s even a straight rip-off of Kyuubey from Madoka Magica, so even when they “borrow” a good idea, it doesn’t make the show any less bad. Despite me thinking that this is the anime form of cancer, part of me wants to keep watching it, just to see if it could possibly get even worse….

I’ve seen a lot of bad shows, but congratulations, Mahou Shoujo? Naria☆Girls! You’re the best… at being the worst.

New Game! has pretty much been on our Yuri Anime 2016 list since its inception, and now that it’s finally started airing, we have a few more potential pairings to ship. The cast is comprised of all females, so finding who to ship couldn’t be easier. Actually, it’s not like there’s A LOT of yuri subtext in this first episode, but at least the girls are all cute and have entertaining relationships with one another, so there’s some potential for more later on (or at least I hope so).

Yagami definitely gets my vote for the show’s Best Girl, though Hifumi comes in a respectable second. Overall, I’m just happy that this show doesn’t feature high school girls and takes place somewhere other than school, because that’s just so overused. I think this anime is a little GochiUsa-esque, so for the sake of cute girls doing cute things, it’s definitely one that I’ll keep watching all season long.

Since the manga has been well-received, this was my most anticipated show this season, and through two episodes, it’s been interesting. An ominous letter from her 10-years-in-the-future self instructs the main character to not repeat the mistakes she made and would live to regret. These letters are an intriguing plot device that immediately makes you interested in how things will play out. Predictably, the tone is rather serious—with regret seeming to play a bit part—so this has all the makings to give us plenty of feels.

This sort of “change the future” scenario can’t help but remind me of Steins;Gate, which is convenient, since the director of Orange also directed Steins;Gate. Of course, I’m not expecting something that great, but I think this has a pretty good chance of being a poignant and touching story of love and friendship~ 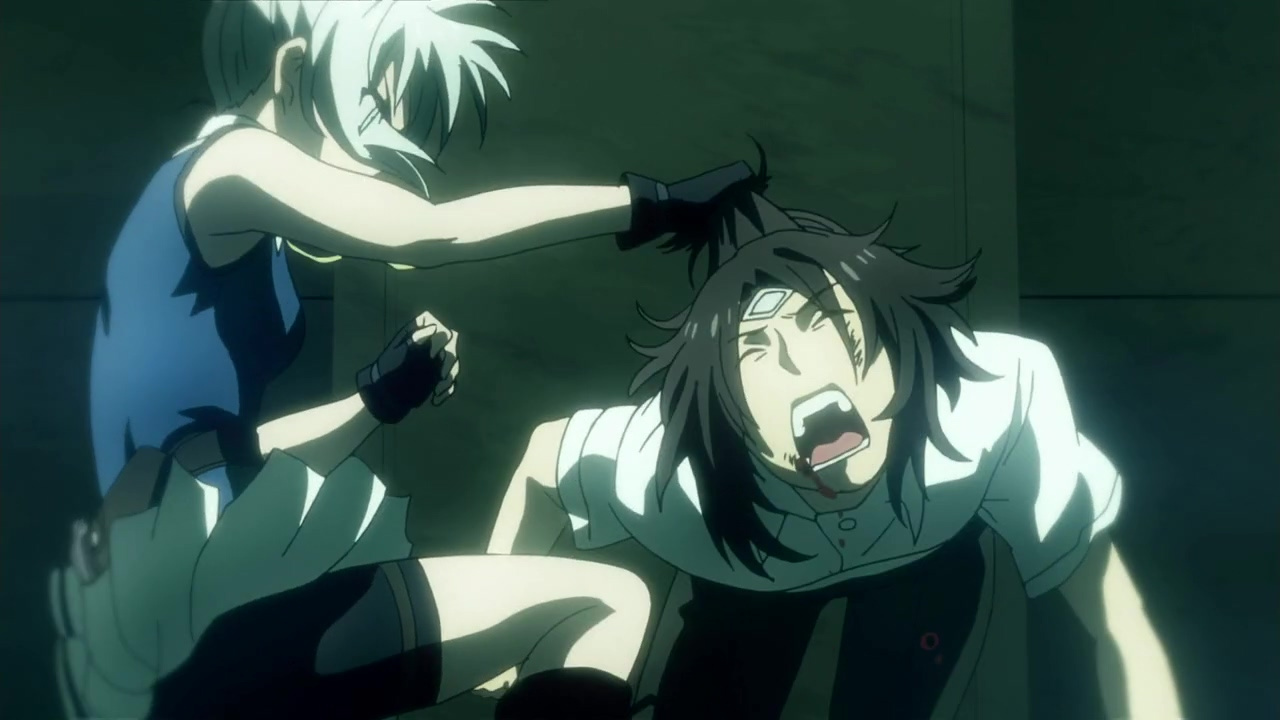 It’s been a while since I’ve seen an anime with a few kickass girls in it, so Taboo Tattoo came around at just the right time. Centering around tattoos that’s enhance the physical abilities of their users, this definitely looks like it has the potential to deliver on the action side of things. Actually, this reminds me a little bit of Ben-To, just without the novel setting and story—and yuri character. Nevertheless, though this doesn’t have quite as much comedy as that show so far, this still might appeal to fans who like a little bit of comedy and punch face in their anime.