Proving that yuri-ish anime doesn’t always have to only consist of high/middle-schoolers and magical girls, Devilman Lady is a more adult take on the subject, and by more adult, I don’t just mean scary lady monster boobs… or do I?

Sporting a vastly different story than the manga it’s based on (which in turn is a spin-off of Go Nagai’s original Devilman manga), Devilman Lady tells the story of Jun Fudou, a supermodel who learns that she’s actually a Devilman, a creature that possesses the Beast gene, yet has only evolved halfway and is unable to abandon its human consciousness.

After the abundance of the light and fluffy anime that I’ve reviewed lately, it’s nice to finally get back to something a little darker and more mature.

The evolution of mankind and the ongoing struggle between humans and Beasts is the central theme of the story, and since this is a two-cour series, the narrative has plenty of time for several twists and turns to take place. I wouldn’t exactly say that I was too surprised with how the story played out, though it was entertaining nevertheless. Something I really liked was the depiction that Jun was struggling so much to maintain her humanity in the face of being a Devilman. It would have been easier to just have her be this invincible superhero-of-sorts, but that’s not the case at all, at least not from a psychological point of view. This helped lend some emotional resonance to the story, as well as a bit of character depth.

The story does feels a tad bit corny at times, such as when Jun—in her Devilman form—grows to Godzilla-sized proportions and dukes it out with a similar-sized Beast. These kaiju moments are the action set-pieces that litter a majority of the episodes, but as corny as they may be, I think they add to the charm of the series. This “wash, rinse, repeat” scenario could probably be repetitive to some, but personally, I enjoyed the variety of the enemies as well as the sense that this growing threat to humanity was cause for concern. They probably could have done a better job in that regard, but oh well.

So the evolutionary story hits on some hot button topics, and overall, it’s a slow-burn that’s mostly enjoyable to those who are into the good versus evil archetypes that you’d commonly find in lore. 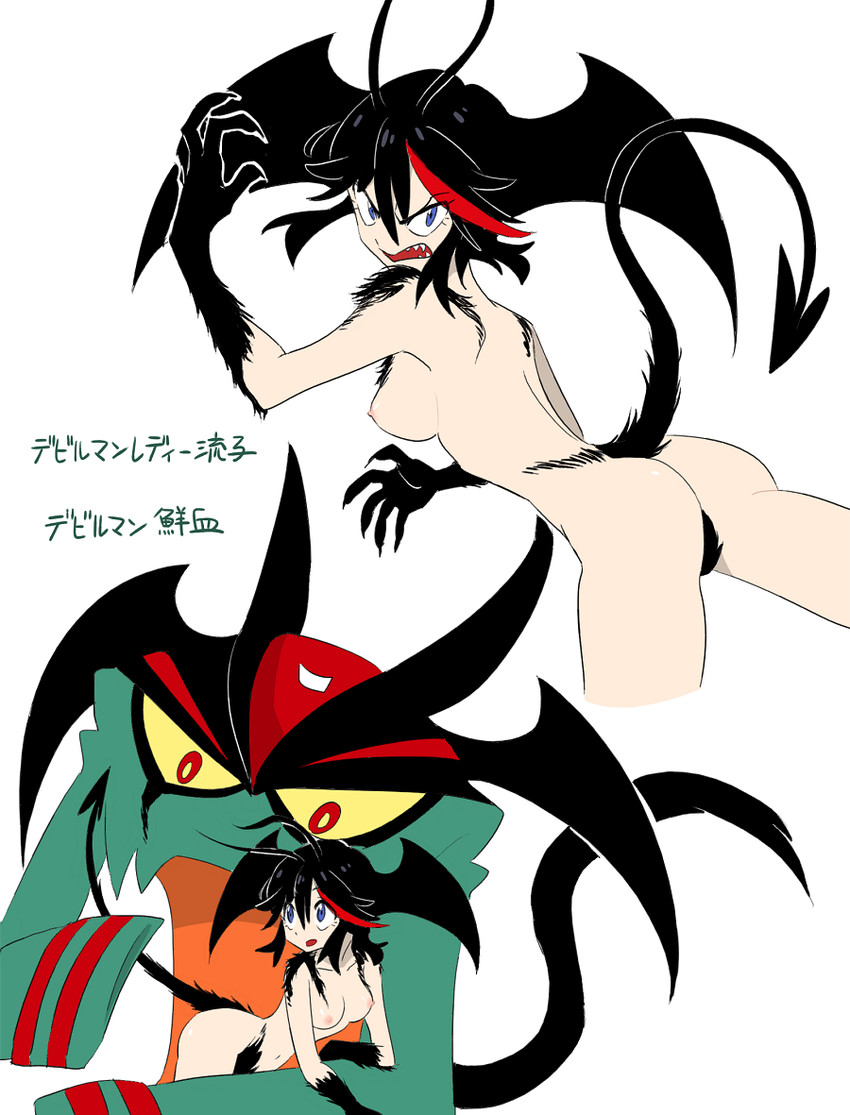 There aren’t a lot of good pix for this anime, so just take this crossover with Kill la Kill. 😛

Moving on to the characters, you’ll find several characters who play important roles in Devilman Lady, but Jun, Asuka, and Kazumi are the proverbial backbone of the story.

I’ve probably talked about Jun enough, but I suppose a little more won’t hurt. Though the term “Devilman” may not immediately suggest it, Jun is actually considered a “good guy”, by and large. That’s kind of odd, but in a “fight fire with fire” sort of way, it makes sense. As powerful as she is in her Devilman form, Jun’s almost the exact opposite when she’s an ordinary human. Her character development was enjoyable to watch, and overall, I think she’s someone who’s a believable character and someone that you grow to care about and cheer for.

Asuka is the person who gets Jun involved in this whole Beast-hunting business, and is the main person in the effort to get rid of these Beasts. Jun was blackmailed into going along with this plan, so Asuka is a rather cold and callous individual that only seems to care about her own interests. Her mysteriousness and general lack of apathy make her a pretty interesting character, as well as an unlikely ally to Jun. I liked the juxtaposition involved with her and Jun, since despite not being the one who’s actually a Devilman, Asuka seems like the one who’s more heartless and less human….

This is all well and good, but what about the yuri content, you ask?. Well, this doesn’t sound like the ideal scenario in which a yuri relationship could blossom, but it’s most definitely there. Not to be forgotten in this tale is Kazumi, Jun’s best friend and fellow model, as well as a student. Kazumi eventually moves in with Jun, which should be enough to get your yuri senses tingling. By the third episode, Kazumi gets referred to as Jun’s lover, so early on, you could say that Jun x Kazumi is kind of a thing, even if it’s just minor subtext (and even though it takes its sweet time to officially happen and for them to truly realize their feelings). Up until that point, Kazumi was unaware of Jun’s secret life as a Beast hunter, so there’s a lot of Kazumi being left alone and in the dark regarding what’s really going on. Ultimately, there’s not a lot of romance in this show, so don’t get your hopes up too high, since there’s really only one episode that has any substantial yuri content (and it happens late in the series). I don’t think that should be a huge surprise to most, all things considered, but I think it’s still worth mentioning.

And I almost forgot about this other dose of yuri. Back when she was in school, Jun and another old friend of hers were… involved, though things take a negative turn. Their relationship is the basis for an episode, so despite this not exactly helping the yuri cause, it just furthers the notion that Jun is a lesbian.

Every protagonist needs a worthy antagonist, and for Devilman Lady, I guess you could say that that person takes the form of a school-aged kid who’s a major pain in the ass for Asuka’s organization, Human Alliance. Just by the way he tries to manipulate people, he’s pretty easy to hate, and he has an evil mastermind vibe that makes him fairly interesting and even more easy to dislike.

Now let’s talk some spoilers for a minute. This portion will be hidden away, so you just need to highlight the white area in order to see the text.

First off, as soon as Jun and Kazumi fully accept their feelings for one another, Kazumi dies. Yeah, I know, that’s probably one of the worst things about this show. Those two don’t even get a full episode to enjoy each other’s company before Kazumi gets turned into someone’s pin cushion. I understand if was for the sake of drama, but come on! Then there’s Asuka. The revelation that’s he/she isn’t male nor female is a huge twist in the story, and it was pretty surprising, though you had the feeling that something shady was up with him/her. And let’s just not even get into that rape scene. The less said about that, the better….

The right to play God is often something that comes up in sci-fi lore, and for the most part, I think that was handled pretty well in this show. The build-up to the final battle between God Asuka and Devil Jun was nice, even if the actual battle was somewhat anticlimactic for me. I mean, some of the other Beasts put up more of a fight than Asuka did…. Still, it’s only fitting that Asuka ends up being Jun’s foil. I wouldn’t have liked it if all of a sudden Asuka was righteous and selfless, so having her as the ultimate “bad guy” was a good decision, in my opinion.

All in all, by the time the credits rolled for the final time, I was mostly satisfied with how everything played out, let’s just try to not have more rape and a yuri murder in future anime, what do you say anime makers?

Keeping things in perspective, this originally aired in 1998-1999, so you should take this assessment with an extra grain of salt, since this was long before I even started watching anime. Aside from an oddly-proportioned character every now and then, I didn’t think this nearly eighteen-year-old anime looked all that bad. Hell, I’d even argue that it looks better than a modern day anime or two. *cough*Mahou Shoujo? Naria☆Girls*cough*

The level of violence is about what you’d expect, with the more graphic violence not really playing much of a role here. There’s the occasional Beast beheading and other such moments, but that’s pretty rare and not a point of emphasis. So given the ancient age, I was satisfied with the end result and think that for the time, this must’ve been a rather nice-looking anime.

As difficult as it was for me to properly evalutate the visuals, the audio is a completely different story. I’d go as far as to say that I think this may have been the best thing about the entire show. Ranging from foreboding and eerie to climactic and exciting, there’s a lot to like about the music. Whenever Jun was battling a Beast and the tide of the battle turned, the music swells up with a familiar hero anthem that’s reminiscent of so many other anime. For contributing to the tone and complimenting whatever was happening on-screen at the time, the music was very good and added a lot to the overall viewing experience.

If you’re in the mood for something a little different and dark, you could probably do worse than this show. The story is a little thought-provoking, and with some decent action and some yuri content, fans of more mature fare might find themselves liking what Devilman Lady has to offer~