It admittedly took me a while to finish this one, though I finally did, and even though I regret not having slowed down even more to enjoy this one a little longer, I’m happy I can finally talk about this with you~

Set in the American southwest, two girls, Marina and Amber, set their sails to take part in the big gold rush that has been triggered by the discovery of an old gold rush miner’s journal that talks about having bountiful treasures hidden around the area. Picking up the lost hitchhiker Marina, Amber more or less willingly gets herself involved in a life-changing adventure.

So the stories revolve around our two protagonists, Amber and Marina. Amber, who has recently lost her grandfather, is currently on a journey in memory of her lost family. The bubbly airhead Marina, on the other hand, just like dozens of others, has made it her goal to find the hidden treasure and take part in the big gold rush that is currently rocking the nation. The two meet in the middle of nowhere, after Marina’s car had broken down, thanks to her forgetting to fill the tank enough for her journey. Long story short, she then gets Amber invested enough to have her take part in the treasure hunt, though, rather in order to protect defenseless Marina, than to actually want to find any treasure.

First of all, in sharp contrast to basically all other Visual Novels that I’ve played so far, this one just screams ‘MURICA right into your face during so many occasions. I guess I wouldn’t even have noticed this, had I not almost exclusively played Japanese Visual Novels before. Though Highway Blossoms finally takes a different approach, which is definitely a good thing, though I also can’t deny the fact that I was sometimes left baffled at how very different this Visual Novel handled situations. Not only thanks to the different location, that being America, but also thanks to the characters, their way of interacting with each other, and especially their way of… let’s say living their life, made me giggle and simply mouth the word “Murica” on many occasions while playing the game. Well, I actually hope to see more stories like these in the future, maybe not about treasure hunting, though a setting outside of Japan seems quite interesting and like in this case, weirdly entertaining, to say the least.

The story in general felt like a breath of fresh air—featuring more or less grown-up characters—depending on where you’re living, that simply do something that has never been shown before, at least not in any yuri Visual Novel, Anime, or Manga. Though, do correct me if I’m wrong.

I guess there are always some parts that simply don’t get you that excited, like their time on Canyon de Chelly, or maybe even the first few conversations on their journey, though I tend to have a hard time getting into specific settings, which is why the beginning of stories are always a chore for me to get through. However, once you managed to do that, what lies ahead is a fun adventure featuring some great yuri romance, so it’s all worth it.

Well, this certainly is a Visual Novel, though it’s not one in which you can actually interact with the story and choices on your own. There are no such choices for you to take, nor are there any other mechanics, like changing the point-of-view or anything like that. I actually wasn’t bothered by that one bit, since this one simply felt like a movie to me, where I can just decide the pace, which was really nice. Though, to be honest, I would have liked to experience certain scenes from other perspectives, too.

After you finished the game, you can actually activate “Goofball Mode”, where you get some additional lines and, as the name let’s us suggest, some random fun conversations. A great idea if you ask me~

To put it simply, the art in this one is quite stunning. There are some CGs that really blew my mind, like the one below, or the many other ones that simply featured more than just a still picture, but some movements, like flickering fire and such as well.

I guess many artists have taken part in creating the art in Highway Blossoms, which is why some CGs depict the characters slightly different than how they look outside of event CGs. I wasn’t much bothered by it, and I in fact believe that having different art styles involved is actually a great thing, though there are always ones you like more, so you always end up hoping to see specific scenes being displayed in the art style you like most.

The love between Amber and Marina blossomed at what I thought to be just the right pace. They slowly get to know each other, slowly realize their feelings, and before anything can happen, they have to go through some kind of crisis to make their first kiss all the more memorable. It sounds like the most generic concept, though thanks to the different setting, and especially thanks to the characters actually not acting like Japanese high school girls, this one felt very different from what we have seen so far, especially in the romance department.

Well, I guess they could have dragged out their first kiss scene for a little longer, actually creating a mood that makes it feel a little more special. And yeah, I know, the scenery was already special enough, though the atmosphere still didn’t feel right to me. I also had a slight problem with Amber’s “crisis” by the end of the game. Well, okay, I guess having a problem with it might not be the right expression to use, since I simply wanted to either beat up Amber myself for her stupidity, or even better, have Mariah do the job for me. Well, it all turned out well, and Mariah kinda did at least punch Amber once, so I think it’s all good. 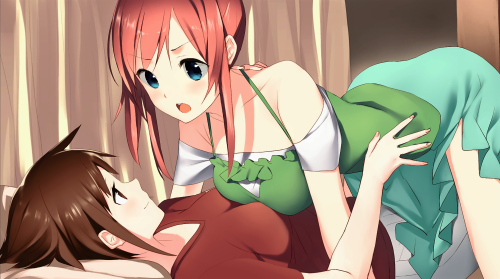 It admittedly took me a while to get used to this very different Visual Novel, though once I got past this, it was an awesome ride that I can warmly recommend to all of you.

The game itself is also pretty cheap, if you ask me, since I believe that about 10 bucks is more than appropriate for 10+ hours of gameplay, as well as the effort that obviously went into this Visual Novel~

Get the Patch to unable the uncensored Steam Version