Let’s just use this opportunity to talk about the most popular yuri manga and manhwa that are out right now.

Since this is a “Let’s Talk About…” post, please feel free to take part in this little discussion by, for example, writing your own thoughts on some or all of the listed works, or by listing some more. 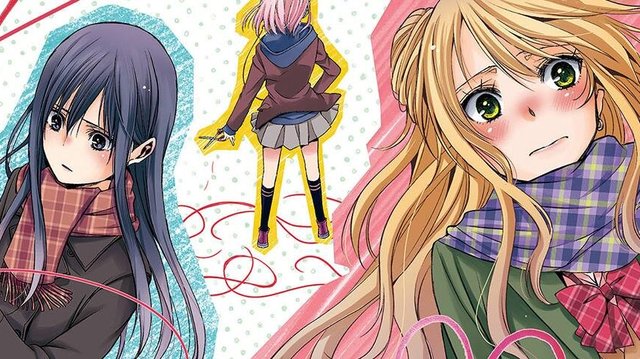 Let’s start with what I think might still be the biggest and most popular Yuri Manga out there, Citrus.

Yeah, well, I surely won’t miss out on any opportunity to talk more about this Manga, will I? 😛

Anyway, since this manga is being worked on in a kind of slower pace right now, other (less known) translation groups have taken over and have started to translate and release this fairly quickly, though at the cost of quality, of course. Those releases are also not featured on the Dynasty Reader, so those who are not bothered by some drop in quality might want to check them out elsewhere.

As for the content of the most recent chapters, I can’t say I do much like it. The most recent events seem uninteresting and kind of irrelevant to me, and even though Yuzu and Mei have something going on—as in actually being in a relationship with each other—things still don’t really proceed any further, thanks to a certain someone. What I’d like to see is some kind of more visible change in Mei’s behavior, even if it just means that she’ll treat Yuzu a little differently. Mei actually doing something out of her comfort zone, or in other words, out of character, would probably do this manga, and all its readers, good.

I guess I might earn a lot of hate for saying the following, but I believe that Citrus shouldn’t be dragged out for too much longer. It should come to a conclusion soon, at least if Saburouta can’t come up with content that doesn’t feel like she is just milking the Citrus cow for some more. That actually brings me to the perfect solution to this problem; end the manga and start working on an Anime.

Moving on, we have Bloom Into You, or Eventually, I Will Become Yours. Well, as some of you already know, I am a big fan of this one. I mean, come on. This is done by one of the greatest Touhou Doujinshi artists, Rireba, so what could possibly go wrong?

Well, right now, the manga is standing strong, delivering some nice drama, good pacing, and some quite likable characters. Though, there is something lurking behind this facade of this perfect, light-hearted yuri manga, and it already showed itself in one of the most recent chapters. What I’m talking about is Touka’s past, and especially her resulting wish to have Yuu never fall in love with her. Compared to the rest of the story, the chapter in which her true intentions were revealed was kind of dark, maybe a little too dark for my taste. Well, I also can’t say that I understand her way of thinking, though that certainly doesn’t mean that it doesn’t make sense, or that it’s a bad kind of development/twist. I’m still very intrigued in how this will all turn out, and I’m actually pretty sure that in one way or another, both will come to the understanding that them sharing the same kind of feelings for one another might not be that bad.

Next up, we have Lily Love, which is probably ranked in my Top 3 reads right now, since it simply focuses on what I like most, without adding in anything unnecessary.  Actually, the more I read this, the more it reminds me of Girl Friends, which is still my all-time favorite yuri Manga out there. Though, since this one features university students instead of high school girls, it earns a brownie point in my eyes, at least.

Well, I just said that Lily Love doesn’t add in anything unnecessary, and what I mean by that is that this manga only adds in what is essential to make the relationship between Donut and Mew grow stronger. All the drama leads to nothing more than to having Mew and Donut either realize their feelings for each other, or it creates opportunities for them to strengthen their bond even more.

This kind of plot is really easy to follow and doesn’t weight you down like some other recent manga do. And that’s exactly what is has been doing all this time and how things will probably continue from here on. They are right now on the brink of experiencing some greater obstacle, but in the end, I can already foresee that the greater the problem they have to overcome, the greater the reward will be after overcoming the crisis. And by that I mean that sex will happen eventually, and I’m impatiently waiting for that. 😉

Lastly, we have Fluttering Feelings, which is, unfortunately, on hold right now. I think most of us already know about this, but for those that don’t, click here to find out about the reasons why the author, Ssamba, can’t continue working on this manga, at least for now.

The story didn’t really end with a cliffhanger, though the last few chapters finally revealed the pair’s feelings in a way that made them obvious to all of us readers, climaxing in an almost-kiss that was, unfortunately, interrupted by one of the most unfavorably timed phone calls in yuri history. What would have happened had they actually kissed? Maybe the night would have ended with a love confession, maybe some more kisses, or maybe even more…?!

Yeah, thinking about all the possibilities makes me wonder all the more when confession time will finally take place. Well, I guess that even if this is one of the most important questions this manga has brought up, what’s even more important right now is to support Ssamba and hope for the best.

And with that, I’ll end this little topic for now. I actually have plans to do a Part II of this with titles like Their Story, My Ignorance of a World Yet Unknown, Happy Sugar Life, and basically all other big Manga titles right now, though I’d first like to hear if you are actually interested in more at all. So feel free to tell me if you want to see more posts like this in the future.