Can you believe it? It’s been 2 years since I last updated this list?! Surely, a lot has changed in these 2 years, so it’s about time to add some new pairings to the list and update my thoughts on the ones that have been in there for years already~ 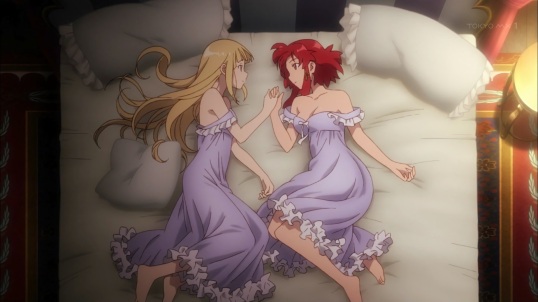 Those two compliment each other wonderfully, with strong and badass Finé handling her beloved and oh so loyal Izetta with the utmost care.

Their scenes together are some of the most enjoyable moments in anime history, and it makes me wonder just why in the world there hasn’t been more fan art and doujinshi about them. It’s something that I really can’t understand, as to me, they seem like the perfect match~

Shizuku and Eris are not just my favorite SonoHana couple, they’re actually my favorite couple of all the visual novels I’ve ever played. Both of them are two of the most gorgeous yuri characters ever, they’re a great comedy duo, and they are simply ultra cute together.

Furthermore, Shizuku is probably one of the most adorable, yet sexy, tsundere characters ever, and she surprisingly doesn’t even come with a loli body like most tsundere characters do. Eris, on the other hand, is very open with her feelings, maybe even a little too open. But it’s exactly this combination that leads to so many enjoyable and funny moments~

Oh, and I should probably mention that Eris is also a slightly dense and very perverted girl, which are of course some very promising character traits~

When it comes to Natsuki and Shizuru, my love for them partly originates from the anime and partly from all the great fanfiction. This is probably the yuri couple with the biggest amount of fanfiction available. On fanfiction.net alone, there are about 4,000 stories about them (number growing), and I can definitely understand why people would want to write about ShizNat. I mean, a badass tsundere and a sexy stalker? How promising does that sound?

Ah well. Anyway, there is a reason why these two have such a huge fanbase, so if you don’t know them already, why not check them out now? I suggest you start with some awesome doujinshi: 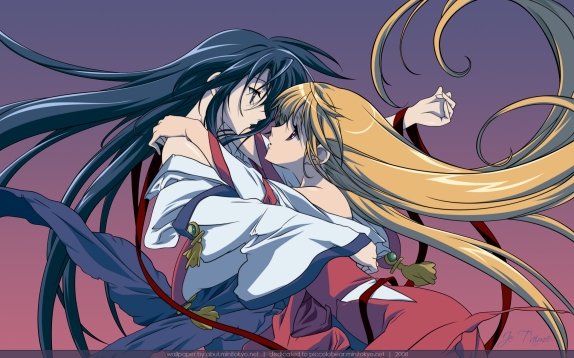 Speaking of famous yuri anime couples, Chikane and Himeko are probably one of the most famous, if not the most famous, yuri couple in anime history, which is absolutely no surprise. Just look how gorgeous they are and how well they fit each other. It’s almost a crime that there is no second season of Kannazuki no Miko, and unfortunately, there aren’t even many doujinshi about them.

But still, we have at least something similar to a second season, and even though I didn’t really like Kyoshiro to Towa no Sora, it was definitely worth watching, if only for some more Himeko x Chikane Himiko x Kaon goodness.

Love Live! sure continued its heavy display of yuri subtext, even in the most recent season of gay school idols. Despite the fact that I had my problems getting to like the new cast, as soon as they threw in the yuri, and especially all the drama between Kanan and Mari, I just couldn’t help but fall in love with it all.

Seriously though, how could anyone not fall in love with these two after their heartfelt reunion and late night “haggu” in school? Who would not feel for crying Mari, who only wanted to be close to her precious (girl)friend? And who on Earth didn’t enjoy Mari’s constant attacks on Kanan’s two treasure chests?! Because I sure as hell couldn’t!

Now if you’ll excuse me, I gotta rewatch episode 9 again.

If you like this pairing, check out these artists: Shittori oblate, Waterfall

My recommendation: Lock on Sweet Honey by Shittori oblate

Somehow, NanoFate has really been everywhere. We got a lot of nice yuri subtext in each of the 3 anime seasons, some yuri subtext in the original manga, a huge amount of fun/cute/sexy NanoFate doujinshi, and a whole lot of really well written fanfiction.

However, the number of new fan works has decreased, which I find really unfortunate. Let’s all hope that this will change once the new movie will be out~

If you like this pairing too, check out these artists: Tokoharu, Asterisk, Hachikai

My recommendation: Harmony by Tokoharu

Ever since I started this blog, which is now many years ago, I’ve loved this pairing. As some of you might remember, they have always been my number one, and they actually managed to stay at the pole position of my list for like 3 years in a row. That’s how much I loved them.

As mentioned many times, this love originates from nothing more than what I still to this day consider the best doujinshi in the world, Vivit Gray’s MokoKeine collection. I have still not come across anything more enjoyable than those lovely and oh so cute and romantic doujinshi that this artist put together years ago. Unfortunately, there seemingly won’t be new ones anymore, and as much as I hate to admit, that’s probably the reason why this pairing might not be as relevant to me as it once was. Nevertheless, MokoKeine probably still won’t leave this list any time soon. Stay strong, you two!

And if you like this pairing, too, check out these artists: Vivit Gray, Rireba, 鼓膜住職

Without a doubt, among all the possible yuri pairings in Love Live!, Eri x Nozomi is definitely the most satisfying one. Some refer to them as the two Love Live! goddesses, and I couldn’t agree more!

These two just have a really pleasant aura surrounding them, which makes pairing them with each other something that I just can’t resist doing. And even after the new Love Live! season, Love Live! Sunshine!!, I just can’t help but love them a bit more than precious Kanan x Mari.

My recommendation: In Spring, In Summer, In Autumn, In Winter. Always With You! by Waterfall

I can already feel people glaring at me for putting them in second place. I know, this pairing hasn’t been around for too long, but can you really blame me for being so obsessed with them? I don’t think so!

It’s all thanks to them that we not only got some of the most satisfying KanColle doujinshi ever, and we also got to drool over them every week, thanks to the KanColle anime that aired a couple of years ago.

Seeing Kaga lose her cool around Akagi and Akagi simply being the adorable glutton that she is… I’m asking you, who on Earth would not fall head over heels in love with them?!

Though, the most influencing factor for me to start loving this pairing so much was definitely not the anime, but one of the few Akagi x Kaga artists, Nekomura.

So if you’re interested in this pairing, check out the following artists: Nekomura and Kisetsu

My recommendation: I Love The One Who Eats A Lot by Nekomura, Kaga’s Flower Illness by Nekomura 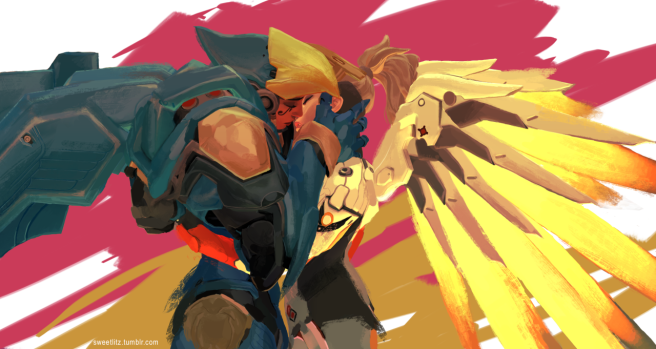 Yes, I know. When I fall in love with a pairing, my love goes very deeply, and this choice proves it all the more.

Ever since I started playing the game, these two have been my number one pairing, despite the fact that Overwatch surely offers more than just a few possible yuri ones. However, seeing how the community so eagerly writes fanfiction about them, draws the oh-so-lovely fanart, and comes up with hilarious and cute short strips, I can’t help but fall in love with them over and over again.

And now, imagine me playing Overwatch, always going a little nuts when I see Pharmercy, either on my own or the enemy team. It’s seriously a sight to be seen, especially when I’m part of the duo, either focusing all of my attention on protecting the precious Swiss doctor, or on healing and boosting the beloved captain, while playing as Mercy. Add a few suggestive in-game voice lines, and the combined Pharmercy sprays that I put wherever I can, and you can be sure that I either annoy everyone on the team or, in some rare cases, get them to participate in my endless shipping.

In conclusion, I find it quite special to actually be able to—in a way—actively take part in the shipping like that, and for as long as I will continue to play this game, I think my love for them won’t lose its strength any time soon~