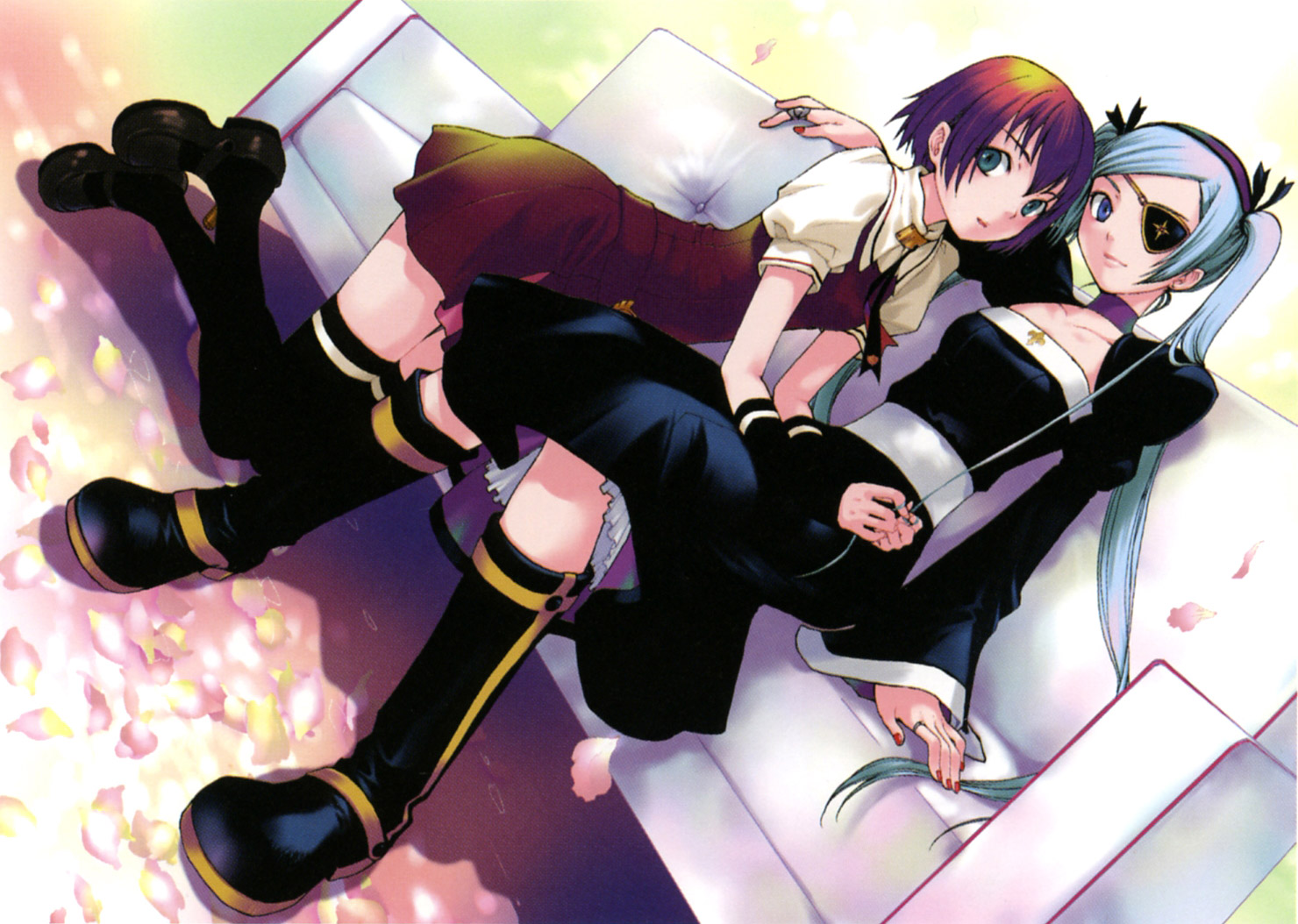 Returning to the YuriReviews time machine, we’re taking a look at a series that I think has been a bit under the radar, Venus Versus Virus. As it turns out, there may be a reason that this anime probably isn’t on many people’s watch list…

Synopsis: Venus Versus Virus follows regular schoolgirl Sumire who’s had the ability to see ghosts since a young age. She tells friends and family about this fact and they just dismiss it, thinking she’s a liar. A chance encounter with a broach flying out of nowhere, a monster and gothloli clad monster killer named Lucia leaves her with a life changing decision to use her ability and fight against these “viruses” feeding upon the human race. — Source: AnimeNewsService

Based on that synopsis, you might think that this anime sounds corny and generic, and you wouldn’t exactly be wrong in thinking that. The story in Venus Versus Virus is pretty straightforward and the kind of story that you occasionally find yourself laughing about, even though it’s not meant to be comedic.

The bulk of the story focuses on the drama surrounding Lucia’s family’s, and despite that sketchy-sounding synopsis, it’s kind of interesting how things came to be. Throughout the series’ twelve episodes, we’re treated to numerous flashbacks that shed light on the situation—including how Sumire factors into this as well—so the backstory is well-covered, and there are some twists to the story that also help make it more interesting, but I wasn’t a fan of how narrow in scope the story seemed. 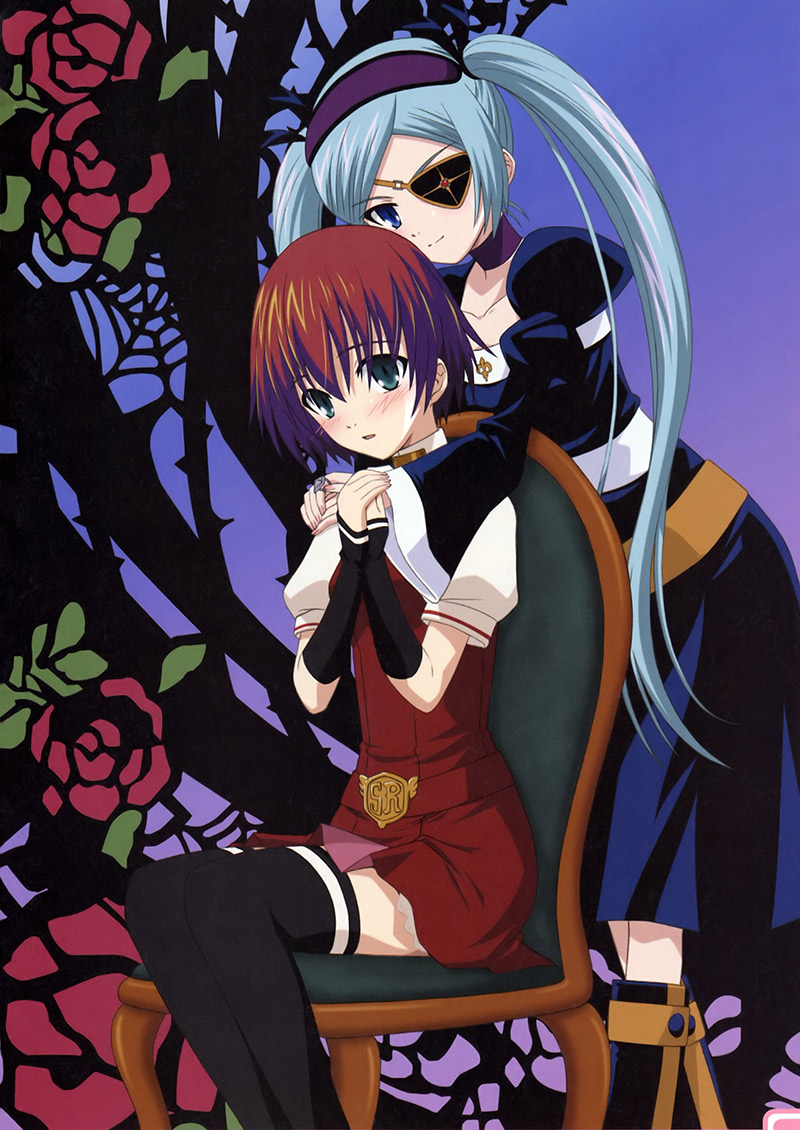 The antagonist, Lucif (Lucia’s father), seeks absolute power (how original…), yet the world outside the confines of Venus Vanguard and Sumire’s school isn’t explored very much. And then, there’s the ending. With the final battle taking less than four minutes to complete, it feels completely rushed and anticlimactic. For all the time spent on what happened between Lucia’s parents, to completely resolve matters in a matter of only a few minutes is crazy, as is how the members of Venus Vanguard get beaten up a few times by the bad guys, yet they’re conveniently allowed to retreat and mend their wounds, as if killing them would’ve proved to be too problematic.

Clichés and a rushed ending aside, I don’t think the story is nearly as bad as you might think, yet it is corny and generic (with a little bit of comedy thrown in for good measure) and just not that great. It’ll probably be a running theme throughout this review, but this is an aspect of this anime that is pretty pedestrian and average at best.

Moving on to the characters, there’s some positive and negative, though the negative sure does leave a lasting impression.

Sumire is your protagonist, and although she’s fairly likable, she doesn’t stand out all that much. She’s one of those characters that’s pretty average in every way… except that she can turn into a Virus-killing machine. She’s not a bad character by any stretch, but I don’t think I’d quite go as far as to call her a good character either. “Competent” seems like a fitting word, so that’s how I’ll go about describing her.

On the other end of the spectrum is Lucia. Compared to the generally warm and caring Sumire, Lucia can sometimes seem somewhat cold and rather serious, and personality-wise, I think I liked her more than I did Sumire. Maybe her cute appearance helps, but so does the fact that she’s a badass Virus hunter herself. Her and Sumire seem like complete opposites, and you know what they say about opposites…

I think I first heard of this anime while browsing a yuri club on MyAnimeList, so I thought to myself, “Why not give this one a go?” For roughly the first two-thirds of the anime, there actually isn’t much in the way of yuri, and not only that, what we do eventually end up with feels like it pales in comparison to Sumire and Yoshiki’s relationship. For seemingly the longest time, he was often referred to by others as Sumire’s boyfriend, and from their frequent get-togethers in the park to how shy and embarrassed Sumire always was around him, it certainly seemed that way (and that doesn’t even take into account their kiss).

“I kind of expected Venus Versus Virus to be not so great, but for an anime that’s getting a review on a yuri blog, that made me feel like I was wasting my time on this.“

But enough about that. It’s water under the bridge, so let’s focus on Sumire and Lucia for a minute. From their first meeting, it seemed to be that there was more to their relationship than the show was letting on, and through all their time working together at Venus Vanguard, they come to care about each other and eventually grow pretty close to one another. Lucia’s personality at times prevents her from embracing Sumire, but over time, that changes, and they develop a pretty good relationship, with some allusions that yuri fans can latch onto. Also, those Sumire x Lucia pics in this post are sooooo misleading. 😀

Near the very end, matters improve somewhat, but it’s hardly enough for me to forget what had happened in that other relationship. The ending doesn’t exactly make it clear what ultimately becomes of Sumire and Lucia, but needless to say that it’s as close to a happy yuri ending as one could hope for, considering what had transpired earlier. Oh, and SPOILER: Yoshiki totally gets murked. 😛

As for the other characters, Laura is the one I found myself liking the most. That little chocolate-loving goth loli brings some much-needed attitude to the show, and once you factor in her twin, Layla, they up the cute factor of this anime tenfold. Nahashi’s the elder statesman of Venus Vanguard, and his history with Lucia’s parents make him a major part of the story. He has that nice fatherly vibe, which makes sense, since he considers himself Lucia’s father—even though they’re not actually related by blood.

Lucia’s parents, Lucif and Lilith, get a lot of screen time, and while Lilith is obviously where Lucia gets her charm from, I don’t think Lucif is all that great as a villain. His motivations are predictable (eternal power and life!), and he’s absent from a large portion of the series, but I’m not sure that would’ve helped anyway, since he’s just kind of blah. Then there’s the previously mentioned Yoshiki, an overall nice guy that Sumire develops a crush on. I don’t want to specifically blame him for some of my issues with this anime, but there is more to him than meets the eye, so that’s interesting, I guess.

Overall, I’d say that Venus Versus Virus has a decent cast of characters, but the near bait and switch doesn’t do them any favors in my book. Had Sumire x Lucia been given more emphasis, I could see myself liking these characters more, but as it stands, they’re just okay.

Coming from the same studio as Kashimashi, Venus Versus Virus probably won’t impress you with its visuals, since the many battles taking place over the course of the twelve episodes seem pretty uninspired and a little bland.

It’s been a decade since this initially premiered, but ’07 also brought us series like the visually phenomenal Gurren Lagann and even the recently reviewed Nanoha StrikerS was no slouch, so that shouldn’t really be an excuse. So, like many other aspects of this anime, the animation isn’t exactly bad, yet I struggle to call it anything more than mediocre.

Shifting over to the music, I was a little surprised by how indifferent I was to it. For the most part, the music wasn’t something that stood out for me at all, although I can say that I didn’t think it was bad, just… forgettable. During some of the more action-oriented scenes, I wouldn’t have minded if it was a little louder, as it was sometimes a bit too quiet for my tastes.

The OP and ED were enjoyable enough, but I always found myself wondering where these Sumire x Lucia scenes were in the actual show, because it almost seemed like they had nicer scenes in the two themes than they did in the majority of the season. All in all, the audio was another decent effort, but nothing too spectacular, and my score reflects that.

At the end of the day, I could point out any number of shortcomings of this anime, but the one that was perhaps the most troublesome for me was the extended absence of any yuri and how that void was instead filled with some het. I kind of expected Venus Versus Virus to be not so great, but for an anime that’s getting a review on a yuri blog, that made me feel like I was wasting my time on this. Eventually, a small amount of subtext came, but it just wasn’t enough to mask the other issues I had with this anime.