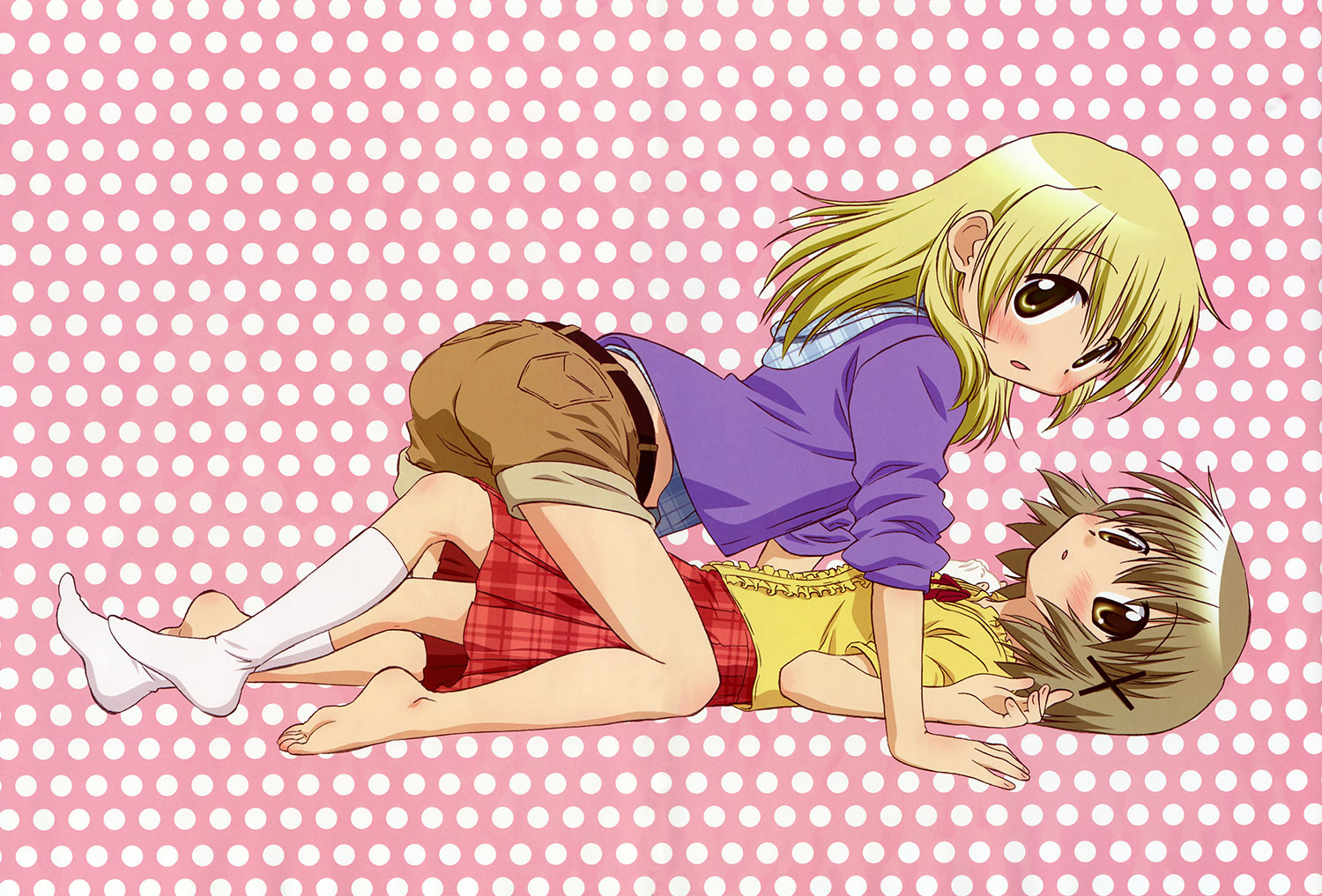 What do you get when you cross a traditional slice of life anime with the anything-but-traditional stylings of Studio SHAFT (the Monogatari series, Madoka★Magica, Maria†Holic)? If you said “an entertaining twist on a well-worn genre”, pat yourself on the back, because that’s exactly what Hidamari Sketch is~

Synposis: For years, Yuno has dreamed of attending Yamabuki Arts High School, but now that she’s been accepted, it means the scary prospect of moving away from her home and family for the first time! Fortunately, Yuno quickly learns that if her new neighbors at the eclectic Hidamari (Sunshine) Apartments aren’t technically family, at least the majority share the bond of being fellow art students. From second year students like Hiro and Sae, who try to behave like helpful older sisters (mostly successfully) to her hyperactive new neighbor, classmate, and best friend, Miyako (who has the scariest apartment ever) Yuno begins to build the support network she’ll need for dealing with strange characters like her oddly masculine landlady, her cosplay obsessed home room teacher, her tooth-chattering principal, and all of the other odd denizens who inhabit her chosen world of art.

^^ That synopsis is quite a large wall of text for a show that really doesn’t have much of a story at all. As we’ve come to expect from a majority of slice of life anime, Hidamari Sketch doesn’t aspire to be much more than cute girls doing cute things, and it accomplishes that task very well.

As the synopsis states, the story revolves around these four art students and all the unique circumstances they find themselves in. The pacing throughout is fairly slow, and quite a lot of time is spent on surreal moments that you’ll often find in Studio SHAFT’s various other anime works. That’s certainly different, and overall, the comedy is there, however, this isn’t the most exciting anime, even by SoL standards.

Although it probably didn’t make too much of a difference in the grand scheme of things, one thing that kind of bothered me was the fact that the episodes don’t take place in chronological order. Each episode jumps around the calendar, so story continuity isn’t this show’s strong suit (for example, we never see if Sae’s team was able to win at the sports festival in episode seven), but there aren’t very many situations like this, so I don’t think it’s a major issue.

You can say that Hidamari Sketch did what I’ve done with this section of the review—stretch out something that probably could’ve been a lot more concise—yet it’s still enjoyable enough so as to not be a detriment to the overall quality of the anime. Moving on…

“These two are like peas in a pod, so even though there isn’t an overt reference to them being anything more than just friends, connecting the dots is not a problem at all.“

Despite how bare-bones the story was, for me, the characters were the driving force that made this anime enjoyable.

Yuno is the main protagonist, and she’s an extremely cute and sweet girl that you can’t help but love. She often seems to find herself in some sort of predicament, and she often finds herself victimized as a result. It’s all in good fun, but as much as I liked Yuno, I liked Miya even more. Out of the main four, she’s the one who’s always stirring the pot and always seems to be goofing off, so her larger-than-life personality is naturally one that I gravitated towards the most. While she’s pretty great on her own, it’s her relationship with Yuno that helps put this on the yuri map.

As best friends, Yuno and Miya are constantly at each other’s side (although seemingly not to the same degree as Sae and Hiro), and despite their contrasting personalities, they’re extremely good together. Although you won’t find that many instances that suggest that they’re anything but great friends, these two were made for one another, and I don’t think anyone can disagree with that.

Not to be outdone, Sae and Hiro take that romantic two-girl friendship to another level. In the OP, you’ll find a scene with Yuno walking in on Sae and Hiro in a compromising position (just like that header pic), but nothing of the sort happens during the actual show. However, through their many interactions, it’s easy to interpret their close friendship as something more, especially during moments such as Hiro resting Sae’s head on her lap after Sae’s deadline crunch (Sae is a professional writer who specializes in fiction). 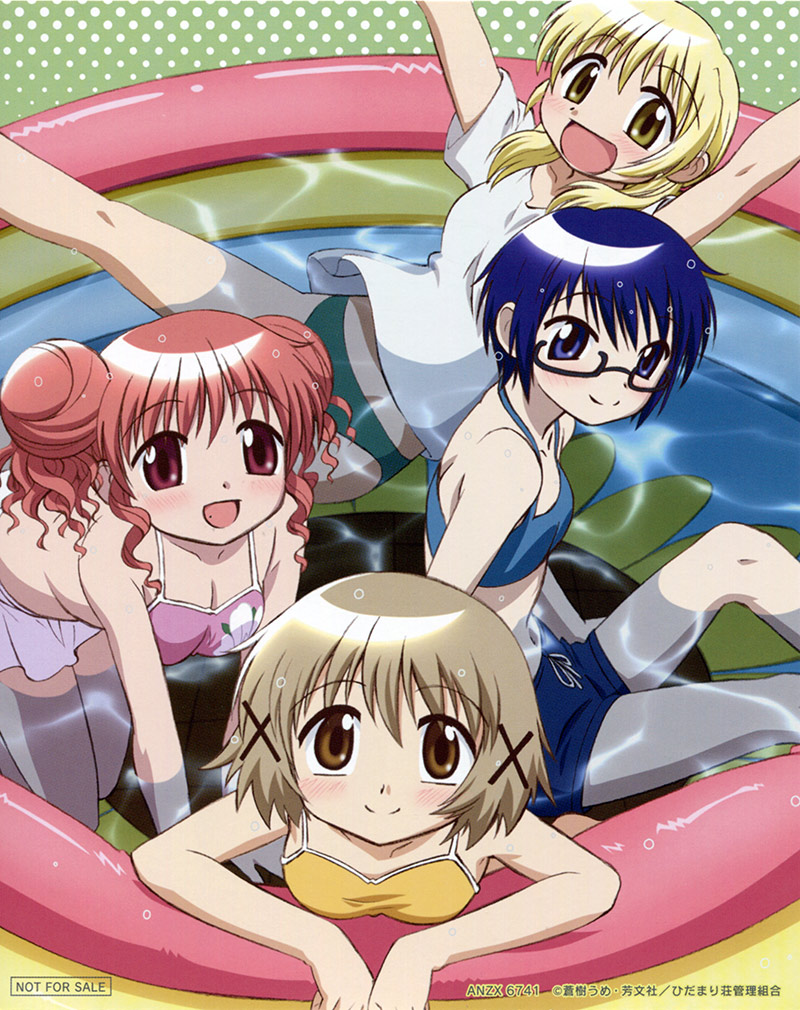 These two have been friends since they were little, and although they both come off as more mature than their kouhais Yuno and Miya, each has their own issues to sort out. For Sae, having her femininity called into question is something that always gets to her (as well as her modest chest), while Hiro’s weight is a sensitive topic for her. These two are like peas in a pod, so even though there isn’t an overt reference to them being anything more than just friends, connecting the dots is not a problem at all.

As much as I liked the four main characters, it was Yoshinoya who never ceased to entertain me. Voiced by the late Miyu Matsuki, Yoshi could almost be viewed as the fifth member of the group, since she often doesn’t act like a school teacher at all, not to mention the fact that, according to her, she’s “eternally seventeen”. Her voice, her penchant for cosplay (and modeling for her students), and her over-the-top reactions help make her a pretty hilarious character that I couldn’t get enough of.

There are a few other characters that play a part in this season (namely The Principal, Oyasan, and Chika), but it’s the main foursome and Yoshinoya that deserve the bulk of the credit for how good this cast of characters was. 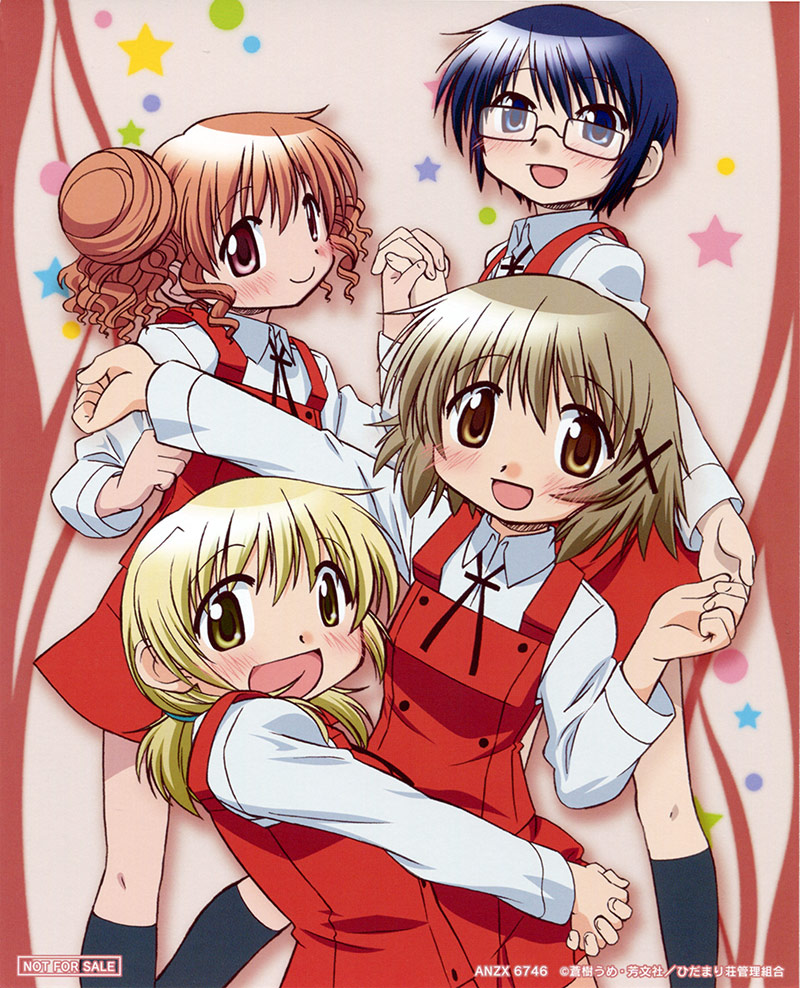 For me, Sae and Hiro aren’t quite as memorable as Yuno and Miya (or Yoshinoya), but all together, these girls are a very enjoyable ensemble that I can’t really complain about at all. Yuri-wise, this isn’t Kiniro Mosaic, much less Yuru Yuri, but there’s still some yuri subtext to help satiate everyone looking for their fix.

Through and through, pretty much all of the hallmarks of a Studio SHAFT anime are present and accounted for here. Mixing overly simplistic visual elements with everything from an abundance of halftones, Ben-Day dots, real-world items taken from photographs, Shaft’s signature quick camera cuts and more, Hidamari Sketch is somewhat of an outlier in the crowded “cute girls doing cute things” genre.

As stylish and unique as this particular style is, it’s not for everyone, and I’m sure that even here, it’s sure to rub some people the wrong way. I can totally understand that—as the minimalist look sometimes irked me myself—but overall, you probably won’t find too many slice of life anime that are as visually interesting as this one is.

Distinctive as the animation of Hidamari Sketch might be, the same can’t be said of the audio, which is pretty much standard fare. That’s not necessarily a bad thing, as the playful background music fits in extremely well with all the strangeness that abounds, but it’s certainly not going to surprise anyone who’s seen their share of SoL anime.

Something I enjoyed a bit more were the two theme songs, even though they couldn’t be more different. The OP definitely fits the bill of a fun and cheerful theme song (which is sung by the show’s four main characters), while the ED is a more mellow and soothing track that I enjoyed quite a bit. The audio was bound to be overshadowed by the visuals, yet the music is very fitting, and honestly, I don’t really expect much more from this genre, so it’s not a problem.

In a genre crowded with so many completely unremarkable series, Hidamari Sketch really stands out thanks to not only a group of very likable characters, but also some Shaft-ified visuals that add a lot of character. Factor in the two pairings that are very easy to ship, and you have a recipe for an entertaining slice of life anime that can appeal to not only fans of cute girls doing cute things, but to yuri fans as well~ 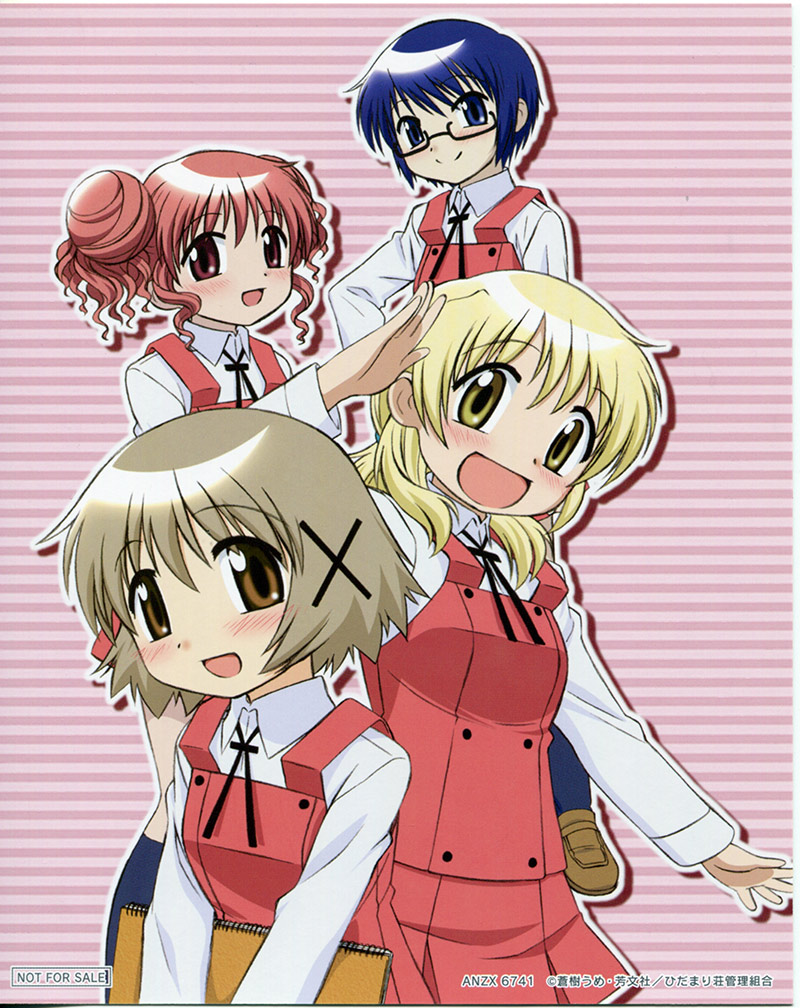