Okay, so here we go. I hope no one hates me too much after this review… 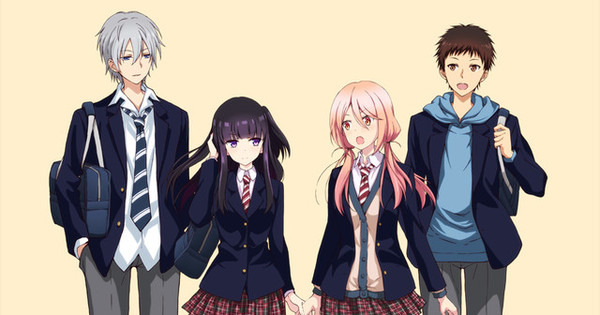 Yuma and Hotaru have been best friends since childhood, but after Hotaru gets her first boyfriend, Yuma feels like the two of them are drifting apart. She gets a boyfriend herself, but as things seem to work out more with him, Hotaru starts acting weird, trying all sorts of things with her as “practice” for her slowly building relationship with her boyfriend Takeda.

There are two major things that might put some people off; First and foremost, there is a lot of cheating involved. Well, the show has NTR in its title, which is arguably not really what it’s all about, seeing that we’re not really supposed to feel for Takeda. BUT the cheating part is at least very much true and plays a big role in each and every episode. Other than that, the “boyfriend department”, consisting of Takeda (Yuma’s boyfriend) and Fujiwara (Hotaru’s boyfriend) put a lot of hetero in our yuri. Some fans of this genre might not like it at all, for others, it’s the perfect way to add some spice into the mixture.

For me, seeing that I already read and liked the manga version, these two things were not really what I had a problem with. Well, don’t get me wrong, cheating is a horrible thing, and I admittedly felt bad for Takeda, but this whole concept is also something that hasn’t been done before in yuri media, or at least very rarely.

I enjoyed seeing the inner struggle of Yuma, not understanding her feelings and always confusing them with friendship in the end, not even realizing that what she was doing was worse than what even Hotaru did to her boyfriend the whole time. I mean, at least in her relationship, the both of them knew they were not dating each other for the sake of love. Of course, it was quite frustrating seeing how often Yuma and Hotaru misunderstood each other, when in the end, even Hotaru didn’t even want to admit her real feelings anymore. I guess the drama was a little over the top, and the fact that the episodes were so short didn’t help this at all. You can add the same amount of drama into a regularly-sized anime, but squeezing it all into short episodes like this just takes everything else away from the series and strips it down to just that. 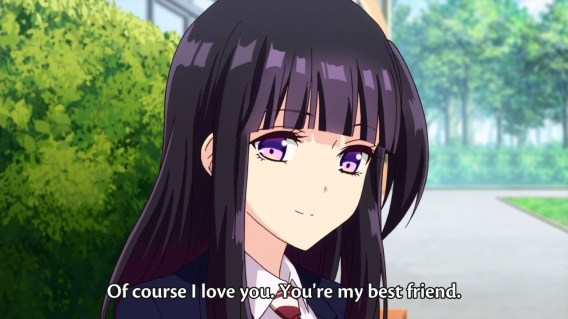 Well, I guess this got me just a liiiiittle agitated, in the end.

However, the biggest issue I had with this show was simply the fact that it was not only short, but also a complete copy of the manga version. Of course, I agree that an anime should follow the events of its original source, but I’d also like an anime to add some more to it. Give the characters more personality, add some new scenes, and simply make it unique. The possibilities you have while creating an anime are so much more, and yet I feel like this one was just a colored and voiced version of the manga, and I think that’s just a big waste of potential.

Also, just taking a closer look at the two following pictures shows that the manga version was a lot better at conveying feelings, and thus, the anime version pales in comparison when it comes to atmosphere—for the most part at least.

The animation was also quite disappointing and didn’t at all help make it feel unique or nice to look at. Well, okay… some of the steamy scenes between Hotaru and Yuma admittedly looked pretty good, but for the majority of its run-time, the lack of quality in the animation was too much and bothered me. Of course, this probably only means that they simply didn’t have the needed money to make it better, but I still can’t help but feel like this all played into ruining the whole show for me.

Weirdly, even though I read it so many times online, the plot didn’t bother me at all. Like I said, I read and loved the manga version, and I was well prepared for the drama to unfold, so even all the misunderstandings and my sympathy for poor Takeda did not change it at all. Well, it could have been much better with longer episodes, a deeper insight into the personalities and lives of the characters, and possibly better animation quality, which is why I’d say that I didn’t like it very much.