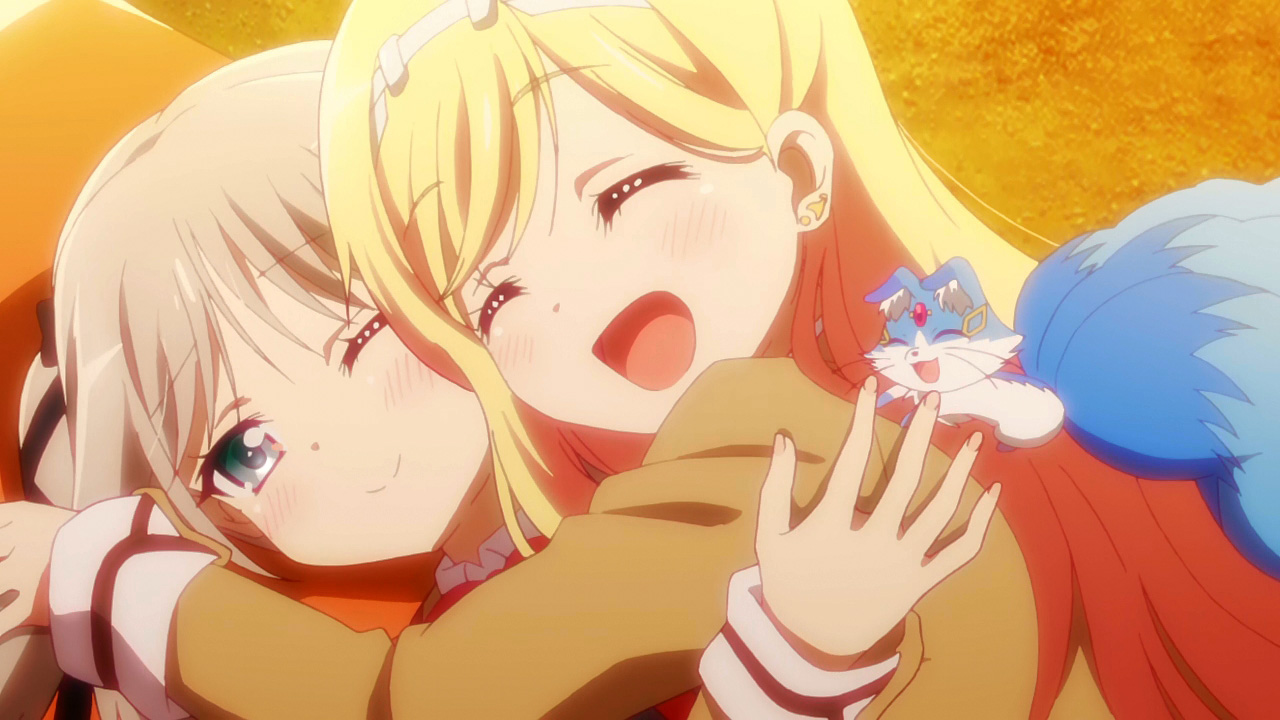 Hina Logi is an anime that wasn’t on my radar at all… until YR reader Daemul brought it to my attention. Needless to say, it probably should’ve been there all along, since there’s a surprising amount of gayness to be found here. Serendipity FTW!

Synopsis: Liones Yelistratova, a pure princess from a small country, enters a school in Hokkaido on a spring day. The school is a specialized educational institution operated by ALCA to train Logicalists, who maintain world peace. Liones enters class S, where she meets many classmates with unique personalities, like Nina. A lively and cute everyday life begins now.

I’ll admit that I haven’t seen the original Luck & Logic, but from what I understand, that doesn’t appear to be required viewing to enjoy this spin-off, so it seems it’s all good.

Action may be listed among the genres, but that’s actually not true at all. The overwhelming majority of the action only takes place during mock battles, but that said, I didn’t really mind. If action were a major point of emphasis, I probably wouldn’t have high expectations at all, since that isn’t something that Doga Kobo is particularly known for. This anime is much more of a slice of life series than an action series, and it comes with all the expected scenarios we’ve come to enjoy from the genre. Exams? Check. School festival? Roger. Moderate amounts of needless fanservice? Affirmative. These situations may be cliché, but they’re still fairly entertaining in this anime, so it’s not so bad.

Since these are peaceful times, the whole angle of Logicalists and Foreigners is underdeveloped, with it increasingly becoming not much more than an afterthought as the series progresses. I would have liked to have learned a little more about this as well as more about ALCA (you know, without having to actually watch Luck & Logic), but it’s all right.

On a side note, Foreigners = evil? Donald Trump must love this anime, am I right?! *ba dum tss*

Lighthearted xenophobia aside, I can’t complain too much about getting a whole lot of cute girls doing cute things. Towards the end, the forced drama between Nina and Lion was off-putting and a little comical to me, but it did wind up strengthening their relationship, so you’re forgived this time, Hina Logi! 😛

“It wasn’t only learning that Hina Logi had its fair share of yuri that drove me to watch this, it was a yuri kiss that ultimately sealed the deal for me.“

So no matter how you look at it, a lighthearted and generally easygoing glimpse at the lives of some magical girls isn’t that bad, and the show had its moments where it’s a lot of fun (the Valentine’s Day episode immediately comes to mind), so if that’s the kind of thing you’re looking for, this anime may have you covered~

When it comes to the characters, I think this anime does pretty well for itself, and as a whole, they’re a cast that I felt was nearly comparable to some of the more notable cute girls doing cute things anime out there.

Starting with Lion, our protagonist is pretty much your standard genki girl with a lust for life. There’s hardly a dull moment with her, so this princess is a ball of energy that makes for a pretty entertaining main character. Girls just want to have fun, and Lion is always someone who has a lot of it.

Contrasting with the extremely outgoing nature of Lion is Nina, who’s more of the quiet and serious type. While Lion is carefree and playful, Nina is solely focused on returning to her role at ALCA, so having these two disparate individuals as the main focus of the yuri makes for some cute times. Over time, Nina eventually warms up a little bit to Lion and their friendship improves as a result.

It wasn’t only learning that Hina Logi had its fair share of yuri that drove me to watch this, it was a yuri kiss that ultimately sealed the deal for me. It wasn’t exactly a romantic kiss, but on more than one occasion, Lion tells Nina that she loves her, so there’s more to it than just that once scene. Those two may get the lion’s share of the yuri glory (see what I did there?), but there’s some other yuri love to go around as well. 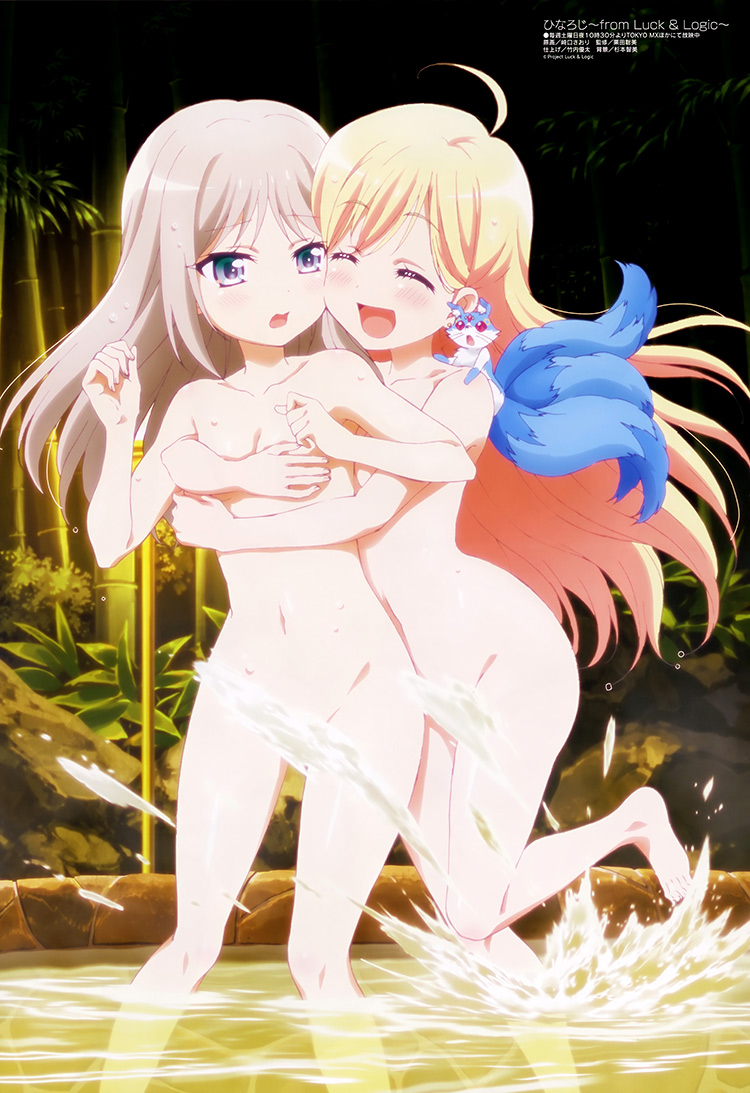 One character that I greatly enjoyed was Mizuki, who’s the show’s resident yuri character. She’s madly in love with Yuuko, the other upperclassman among the girls, however, that love never seems to get returned. Often times, Mizuki serves as some comic relief, as we get to see her go to great lengths for Yuuko’s’ love and attention, but things just don’t go her way. Yuuko’s an entertaining character in her own right, and if there was a spin-off starring these two, I’d watch that in a heartbeat. On a positive note, after graduating, these two will be spending a lot more time together working for ALCA, so maybe Mizuki will get her wish after all~

Besides these two pairings, I guess you could also ship Yayoi with her two underlings, sisters Karen and Karin. Their family has protected Yayoi’s high-status family for generations, so they’re stuck to her like glue. Mahiro may have been the one to have had the yuri scene with Yayoi, but make no mistake, it’s these two that are the ones truly interested in her.

Lastly, all of the Foreigners shown are female, so with the subtle way that Foreigners and the Logicalists they’re contracted to enter a Trance together, those relationships can probably be viewed as having some yuri undertones as well. All in all, it’s surprising that there was as much yuri as there was. For me, it helped make a show that would’ve otherwise been pretty forgettable, somewhat memorable.

Unfortunately, not all of the characters can be called yuri characters, but that doesn’t make them any less entertaining. A perfect example of this is Mahiro, who was probably my favorite character in the show. She kind of reminded me of Satania from another Doga Kobo production, Gabriel DropOut, had Satania been a zany egghead with a penchant for building devices that have the bad habit of exploding…

The story may not have been particularly noteworthy, but with the help of some enjoyable characters and some good, old-fashioned yuri, I’m not lion when I say that this anime got those two aspects right. (So sorry for the bad lion puns, especially since her name isn’t even pronounced like that…) 😛

Something you can probably say about all Doga Kobo anime is that they’re all colorful and vivid, and Hina Logi is no exception. The handful of battle scenes are mostly unremarkable, and you’re definitely not going to confuse this for a serious action anime. Moe is the name of the game, and like most other efforts from this studio, this anime is certainly up to snuff. If you can overlook some occasionally rushed and inconsistent art, this is a decent effort that doesn’t try to be much more than your standard “cute girl” anime.

When it comes to the audio, there isn’t that much to say. This is a by-the-books effort that sounds like most other anime of its kind. The OP is fine, but the cardboard cutout look is really what made it for me. The ED was a little more forgettable for me, but I guess it makes sense that things worked out that way. Anyway, there isn’t anything surprising about the music, so let’s move on and wrap things up.

You’ll find plenty of other anime that do what Hina Logi does and do it better, but I think this was still a pretty entertaining little show. The fantasy/magical girl elements didn’t do that much for me, so I liked this show more when it was just a simple story of cute girls doing cute things. If you’re into that sort of thing, you might enjoy what Hina Logi has to offer, and it certainly doesn’t hurt that Lion and her mane girl Nina helped up the yuri factor quite a bit. 😛 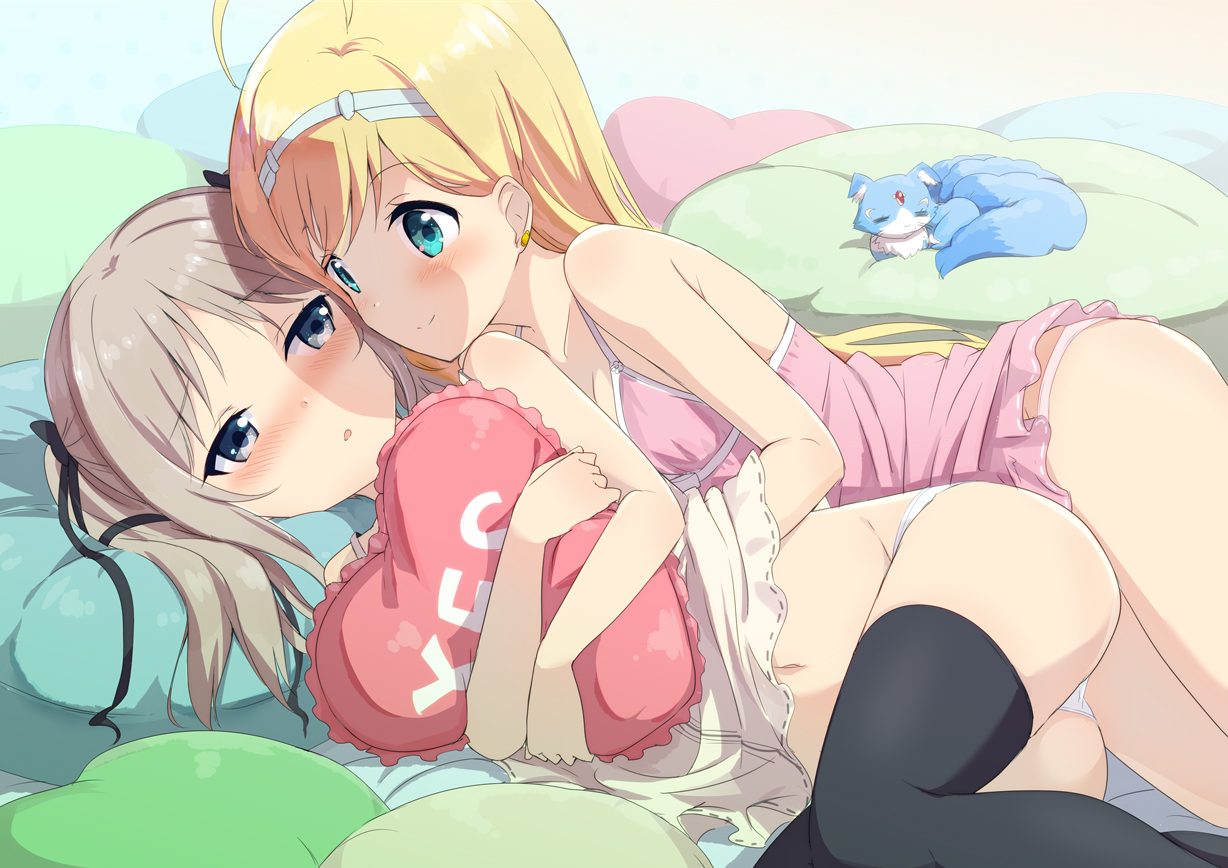