It’s that time of the year again, so enjoy our Final Thoughts on the summer anime season that just came to an end~ 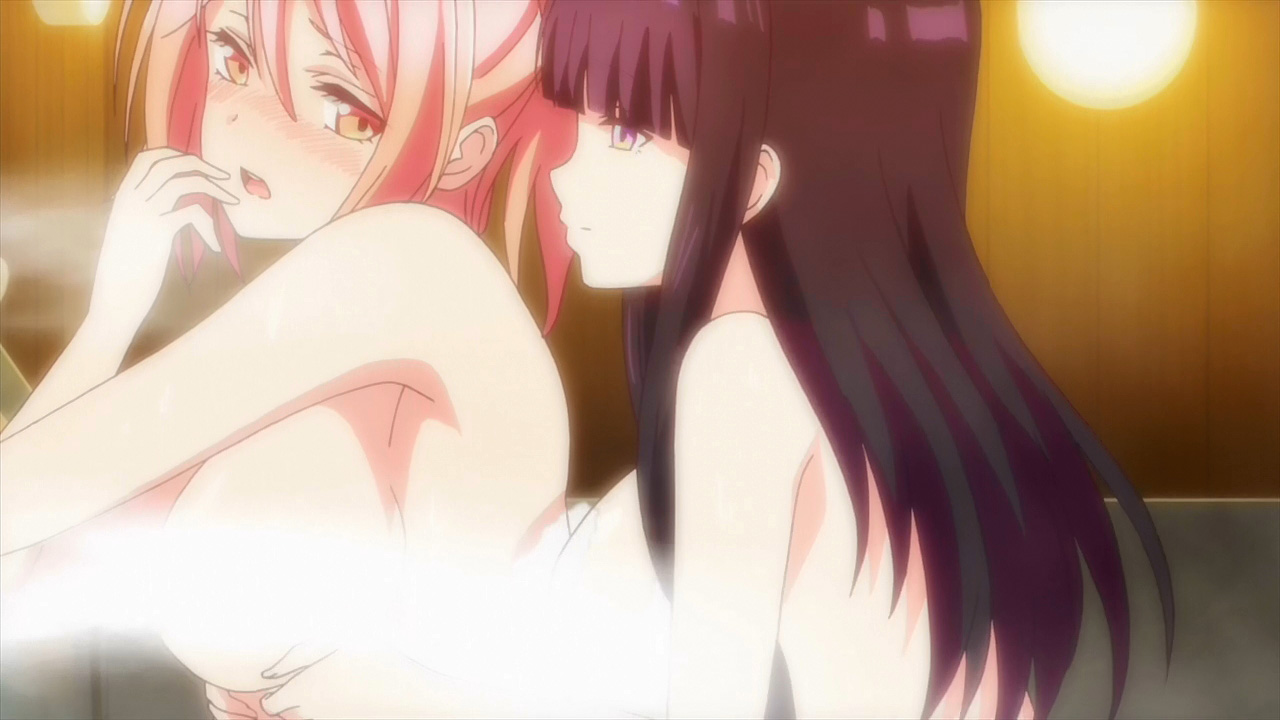 You can read our full review of Netsuzou TRap right here, so there’s no need for me to ramble on and on about how I didn’t like this at all.

At one point in time, I was contemplating picking up the manga, but after watching the anime, needless to say that I now have zero interest in doing so. When Creators in Pack was revealed as the studio in charge of production, I think eyebrows were raised due to their less-than-stellar track record, and things didn’t get any better when the show’s very first PV was revealed, as well as the short-form anime format.

Netsuzou TRap may have turned out to be a dud, but the Citrus adaptation and the Kase-san OVA continue to give up hope that maybe we’ll finally have another good yuri anime come our way in 2018. Whether or not they meet our expectations, I doubt either one of them will be as disappointing as NTR turned out to be. 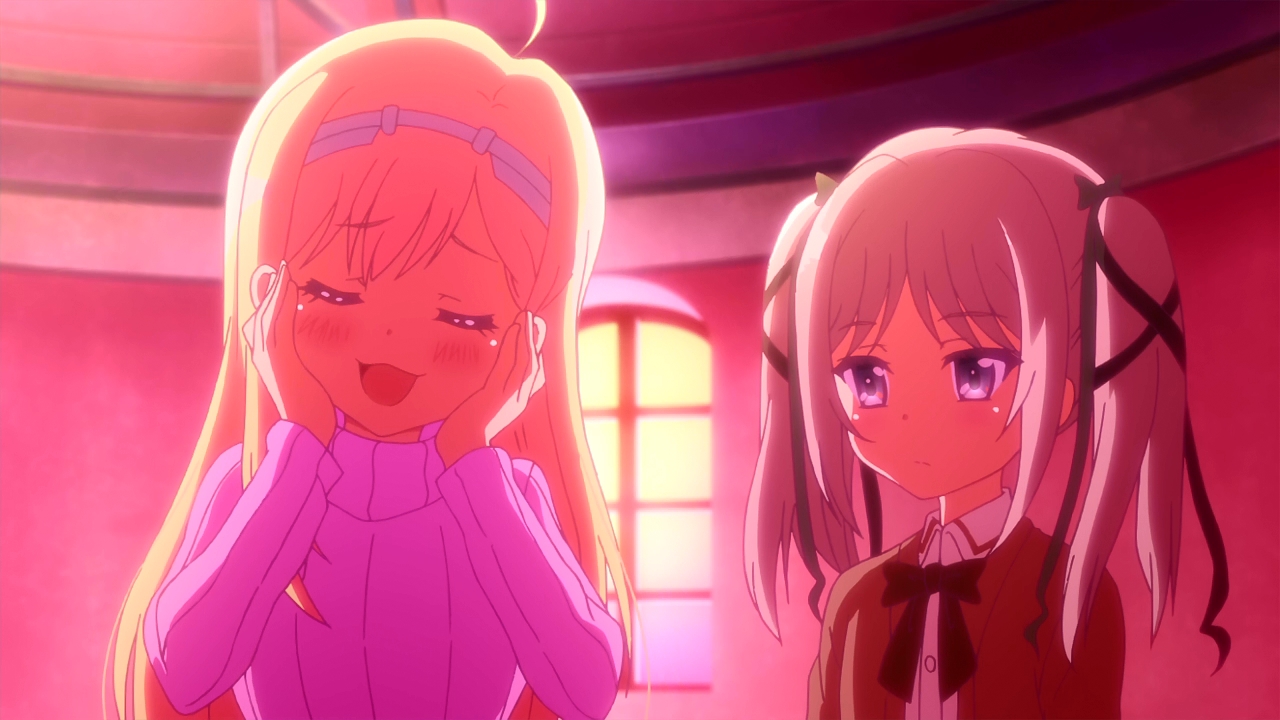 You can read our full review right here, so let’s try to keep this brief.

Hina Logi was a super-late addition to my viewing ledger this season, but I’m glad I watched it, because it turned out to be an under-the-radar gem, at least when it comes to yuri content. It’s not quite Yuru Yuri or Kiniro Mosaic, yet there’s still a fun time waiting to be had for fans of cute girls doing cute things. If you’re lion around waiting for a good slice of life series, this is a show that you might be interested in. 😛 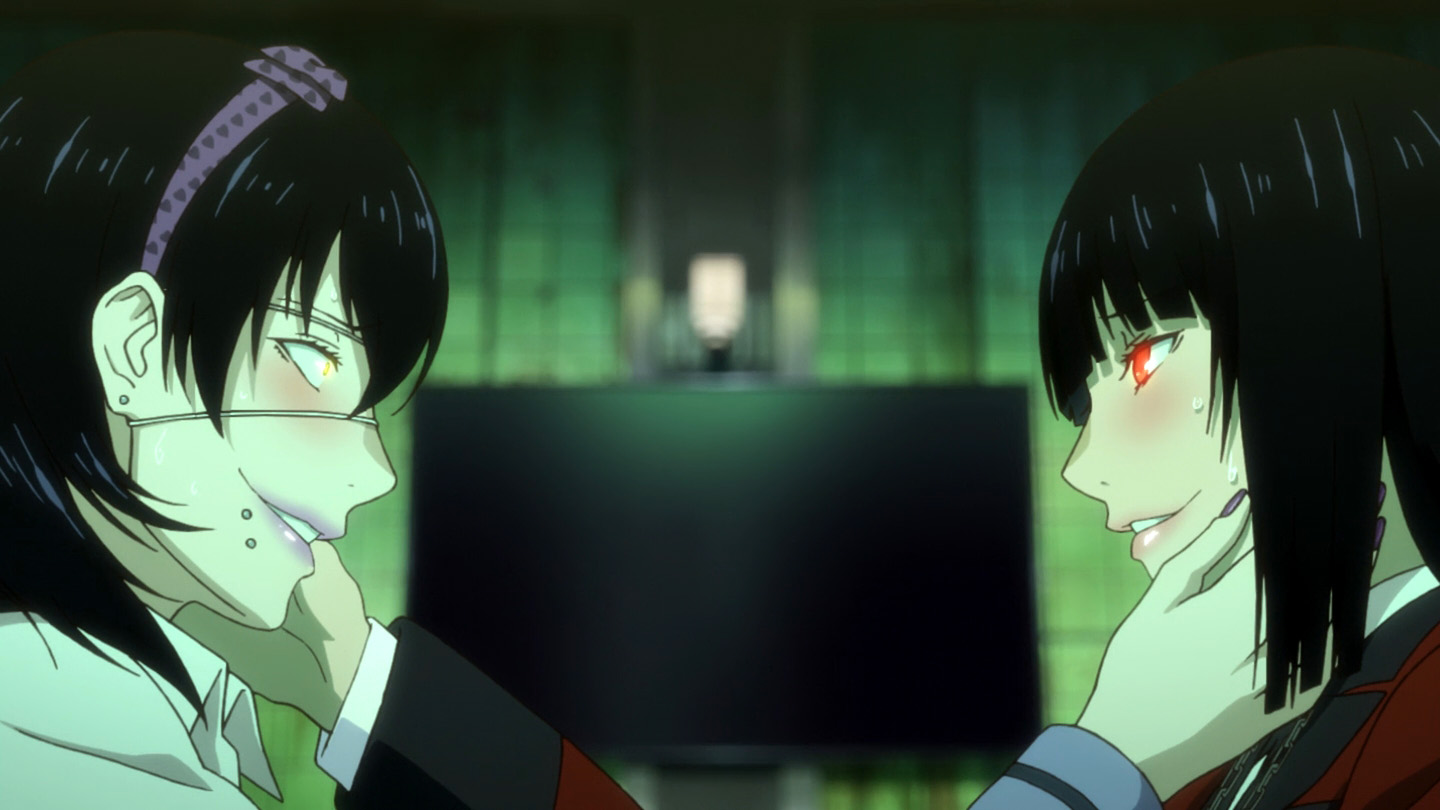 Coming into this past summer season, this is the anime that caught my eye the most. An anime about gambling? That’s kind of different, but this anime seemed to have a sinister tone and was more about the thrill of victory and the agony of defeat in this elite academy, so I gave it a go.

As it turns out, this was more than I bargained for, since it was filled with maniacal characters that were either drawn to power, or simply were there to satisfy their urge to take risks and gamble, as was the case for the protagonist, Yumeko. She was as fascinating and complex an individual as you’re likely to see, and thanks in large part to her, the characters were easily the best aspect of this anime.

Based on the OP, I was a little hopeful we could possibly get a bit of yuri here, and thanks largely in part to Yumeko’s irresistable persona, there were some yuri undertones present. The student council president was particularly interested in Yumeko’s antics, but it was really Midari and her sadist ways that eventually became obsessed with Yumeko. It wasn’t too much and it was twisted, yet it was something.

In a season of magical girls, adventurers, spies, and questionable human beings, Kakegurui was a nice change of pace that turned out pretty well. 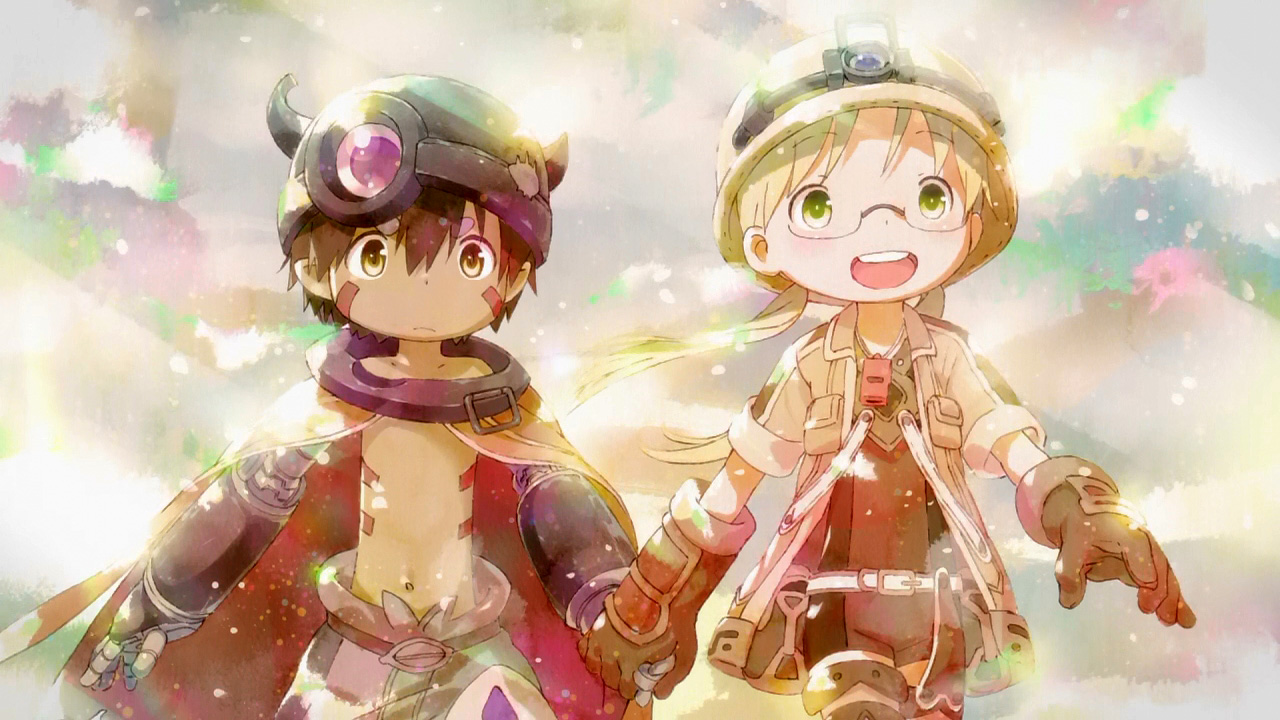 Coming into this summer season, Made in Abyss was probably my most anticipated show, and I think it certainly lived up to my expectations. Don’t let the moe appearance fool you. This is far darker tale than you’d think, and Riko and Reg’s journey to the depths of the Abyss comes with many hardships for our two main characters. I loved the adventure as well as the drama and mystery that surrounded this anime. It’s not easy being cute and charming while at the same time retaining a sense of seriousness, but this anime strikes such a great balance between the two that I can’t help but be impressed with it.

I’d say that one of the only things I disliked was the fact that it was a mere thirteen episodes. The Abyss was a wondrous world that I would’ve loved to have seen explored in more depth, and the same could be said of the characters that I couldn’t help but feel overly attached to. It would seem that an OVA (or several) or another cour has to be coming at some point, so I’m crossing my fingers and eagerly awaiting that. In a way, this kind of reminded me a little bit of Ico, the PS2 masterpiece, what with Reg escorting and protecting Riko throughout their adventure (not to mention the emotional rollercoaster it puts you through).

In any case, this was my anime of the season, as well as one of my very favorites from recent memory. At times heartbreaking, at other times exhilarating, Made in Abyss is a show that any adventure fan should probably give a go. It’s one of those rare shows that seems to get almost everything right, and I can’t recommend it enough~ 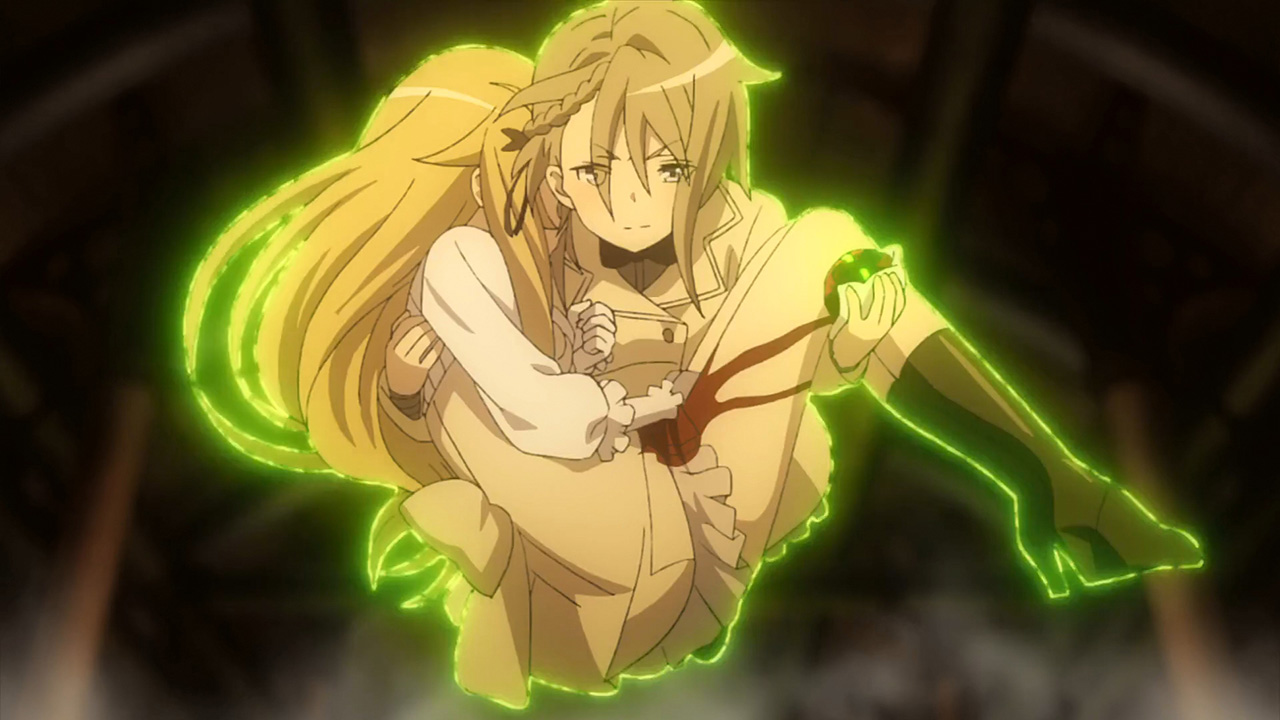 When I picked this anime up, I don’t think I was expecting that much. Maybe it was the because of the near all-female cast that I thought that it could be a half-assed attempt at an espionage-based action anime, but thankfully, that wasn’t the case. The girls more than held their own as spies, and it was always pretty interesting to see how they dealt with the various missions they undertook, especially since this anime wasn’t simply a vehicle for mindless action.

It was great to learn of the girls’ backstories and motivations, but let’s just suspend our disbelief that a group of teenagers are elite spies that hold the fate of two warring nations in their hands. This was one of those shows that I was hopeful could possibly have some yuri, and I wasn’t let down in that regard.

The relationship between Ange and Charlotte turned out to be one of the best things about this show. From how they first met and accidentally traded lives to the very climax of Operation: Changeling, their prince x princess-type relationship was a major part of the show, even though it didn’t really get a lot of attention until late in the series. However, the final couple of episodes brought them to the forefront and cemented the fact that they’re very much more than “friends”.

Princess Principal had the unfortunate luck to air in the same season as Made in Abyss, and the comparison probably wound up hurting it a little bit for me. They’re not very similar at all, but I couldn’t help but compare them anyway. Still, Princess Principal was an entertaining show that did some things a bit differently, not the least of which was supplying us some yuri in a unique scenario that you don’t see often at all. The more I write about this, the more I realize that there might be enough to warrant a review, so look out for that in the near future. 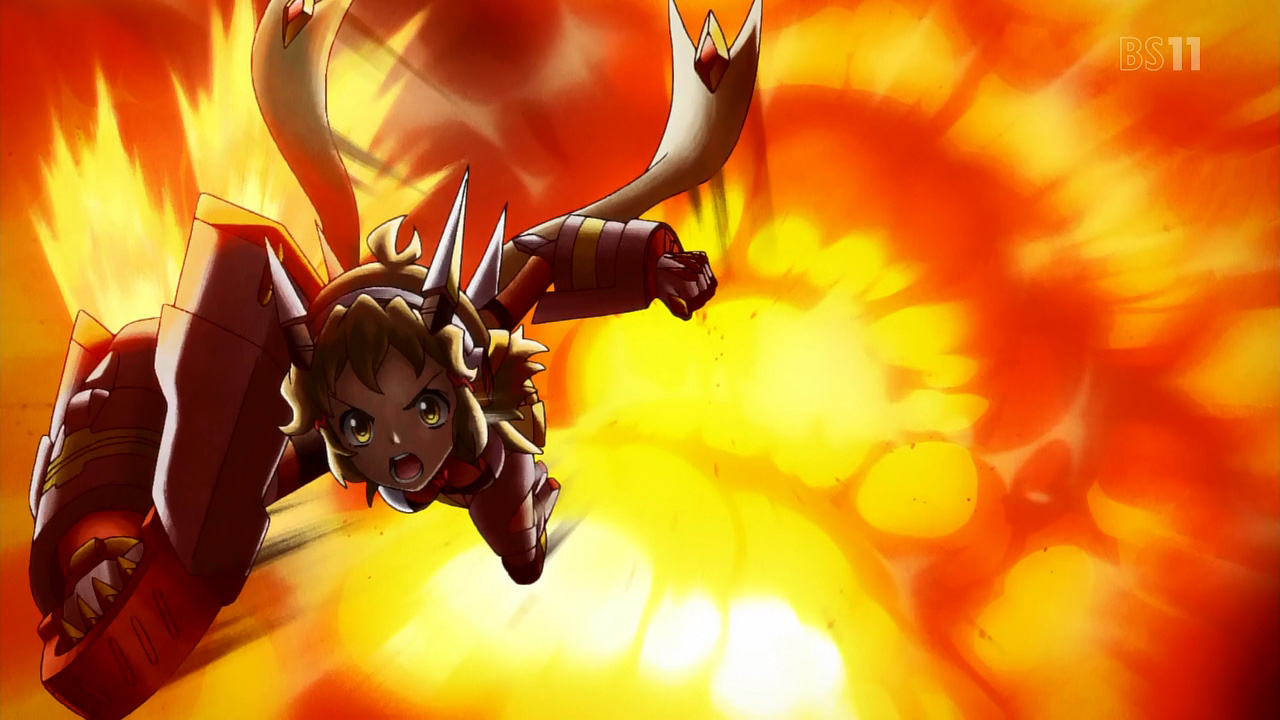 Our full review for this one is forthcoming, so let’s gloss over this one pretty quickly. I think what most people expect from Symphogear is over-the-top action, and once again, we weren’t let down. Just like the previous seasons, the story is pretty much here only to provide ample opportunities for more song and dance fighting, but I think we’ve all come to accept that.

The new group of enemies weren’t bad, but I miss the days when Finé and Carol were the the primary antagonists. Adam and Tiki were annoying, and the other new alchemists didn’t measure up to the enemies from past seasons (at least for me), and I was a bit disappointed in that regard. There’s so much fighting going on that the three possible yuri pairings (Hibiki x Miku, Shirabe x Kiri, and Tsubasa x Maria) end up spending most of their time preoccupied, but at least Hibiki and Miku share a few sweet (albeit brief) moments, so they haven’t been completely phased out.

Coming off my favorite season of Symphogear yet, GX, I was hopeful that AXZ could change all that, but I just didn’t enjoy this season as much as the others. You could probably argue that the music and action are as good as ever, yet I think the series’ formula is starting to wear on me a bit. A fifth season is on the way, so like it or not, we can likely expect more of the same.