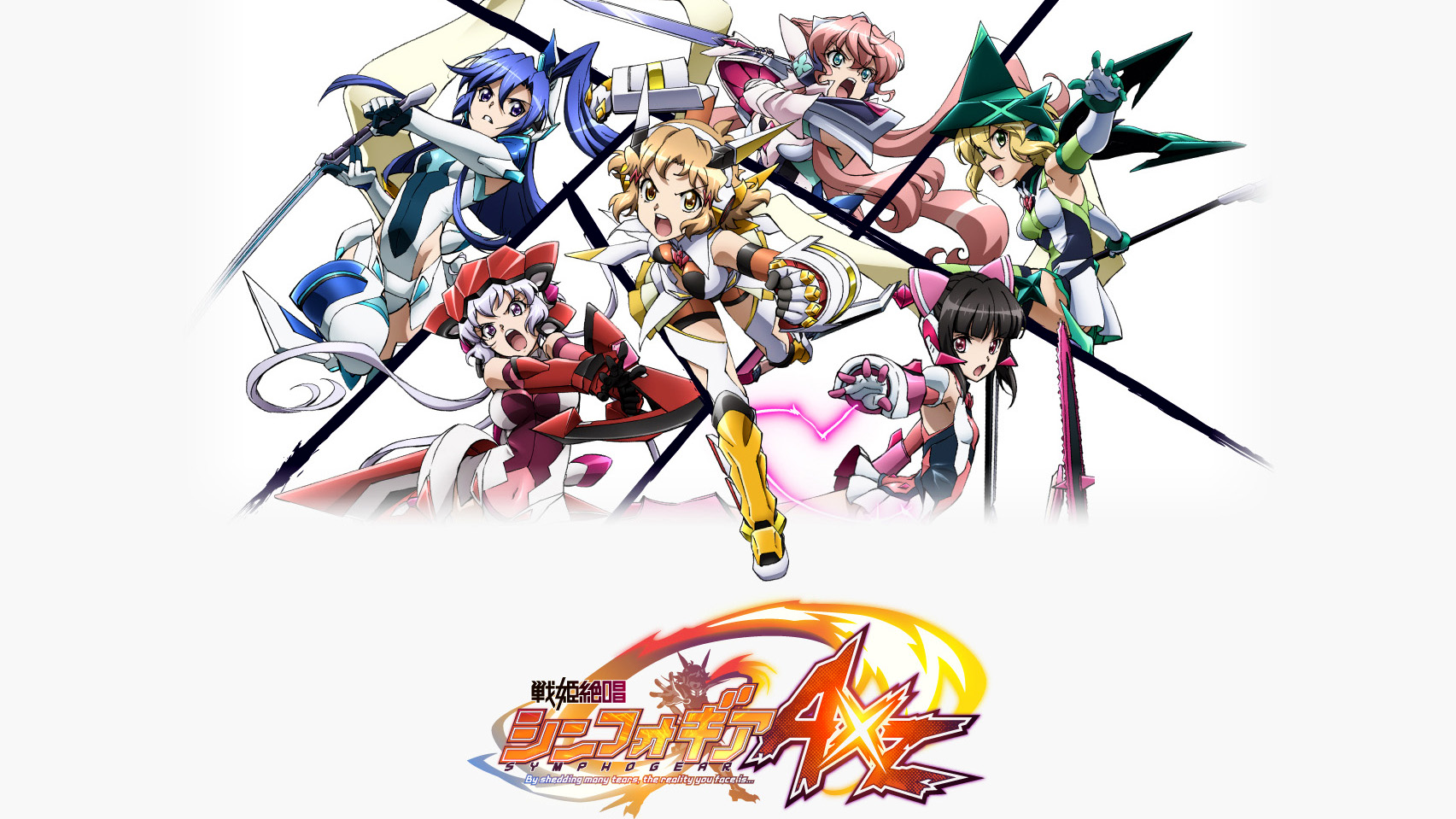 Whether it’s due to lagging sales or simply running out of source material, most anime never get a fourth season. In this regard, Symphogear is the exception rather than the rule, not only getting a fourth season, but a fifth as well. You can’t achieve that without a hook, a way to draw viewers in, and Symphogear‘s has mainly been the combination of over-the-top magical girl action and more j-pop than you can shake a stick at. Suffice it to say, nothing has changed with Symphogear AXZ.

After Carol and her group of alchemists bite the dust, another evil organization, the Bavarian Illuminati, has stepped out of the shadows and are intent on fulfilling their long-running quest for a new world order that will regain control of history.

The story in Symphogear has never been its strong suit, and the same applies here. The story is rather straightforward, with the Bavarian Illuminati doing typical bad guy things by sacrificing tens of thousands of people to further their goals of world domination, and S.O.N.G. leads the resistance. It’s nothing you haven’t seen many times before, but it’s entertaining nevertheless.

Compared to previous seasons, I think the story seemed a little less silly (how can you get sillier than blowing up the moon?), and that I enjoyed. The new villains’ motives are stated from the beginning, and they get fleshed out enough to sell them as worthy adversaries that will require the girls to learn some new tricks and further develop their skills in order to defeat.

“This is still the same cheesy, clichéd Symphogear you remember, and at this point, I think it’s become part of its charm.“

Things like an uninspired attempt at some character development for Chris and attempts at some personal drama for characters like Shirabe felt melodramatic as well. Long story short, the moments in between all the fighting continue to be the weak point for the series, but it’s not the worst thing ever, and they just serve to set the stage for some epic fights.

This is still the same cheesy, clichéd Symphogear you remember, and at this point, I think it’s become part of its charm. You’ll get some ludicrous plot about bad guys taking over the world, and then the girls show up and all hell breaks loose. Crazy musical action ensues, everything blows up, and Hibiki and Co. eventually fight back the threat and preserve peace for another day. It’s simple, but it’s still entertaining, and that’s what’s most important.

(from left to right) Prelati, Cagliostro, and Saint-Germain

I don’t know what more I can say of the main group of girls—since they’re all returning once again—so let me focus on the new characters.

It’s pretty telling that not a single MAL member has favorited this season’s big bad, Adam. Even Dr. Ver has some, but Adam, ZERO. Actually, none of the new villains have many favorites on there, so maybe I’m not alone in thinking that these characters were underwhelming. Whether it was Finé, Carol, or Dr. Ver, I think each of them felt stronger in their convictions than Adam, and you can even add Saint-Germain to that list.

Out of all of the new characters, she was easily my favorite, and I think that she has all of the makings to be a future permanent ally of S.O.N.G. She’s sort of similar to Maria in that she gives off that strong and assertive demeanor, and it’s easy to see how she thrived in a leadership role. As for the others…

Prelati’s there just to bring the required cuteness, complete with a stuffed animal froggy for good measure, and Cagliostro is gaudy personified. Actually, both Prelati and Cagliostro used to be men, until they met Saint-Germain and biologically altered their bodies in order to obtain an extended lifespan and permanent youth. Neither one of them made that much of a positive impression on me, and the less I say about Tiki, the better, since everytime she appeared on screen was the equivalent of nails on a chalkboard for me.

Overall, even though Cagliostro exhibited a lot of personality, I felt like the group as a whole were a little bland—or even worse—annoying, at least compared to the villains in previous seasons. The main group does their part, but I wouldn’t be too shocked if season five ends up introducing an entirely new set of villains, with AXZ‘ put out to pasture.

But enough about them, what about any yuri content? Well, outside of like two brief moments at the beginning and end of the season, Tsubasa x Maria is largely neglected, but I wasn’t expecting much from them anyway. What’s most disappointing is how we went from a healthy dose of Shirabe x Kirika in GX to a fraction of that in AXZ.

And then there’s Hibiki x Miku. As the main pairing in Symphogear, these two have their moments of domestic bliss, with Miku doing her best impression of a lovely wife. You could say it’s the calm before the storm, since trouble tends to be constantly brewing, and Hibiki leaves Miku to go do her part in saving the world yet again.

Just as before, Miku doesn’t play an active role in the missions Hibiki and the others undertake, so her screentime is somewhat minimal, yet we still kind of got one of those ridiculous scenes that you sometimes see in the movies where one character rushes haphazardly into danger after trying to get through to/talk some sense into the “beast” character. Afterwards, Miku then goes out and catches Hibiki, and all is right with the world again. 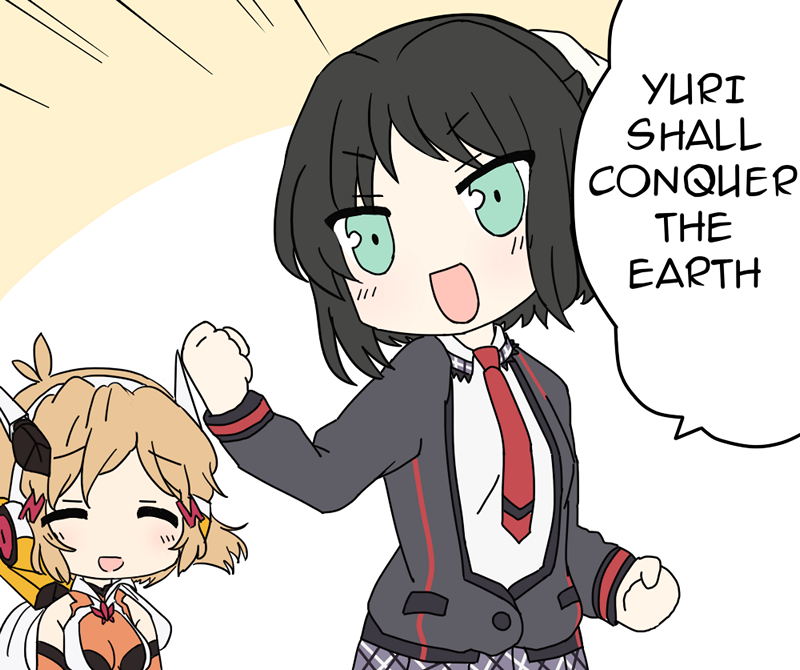 Hibiki and Miku’s nicknames for each other—with Hibiki calling Miku her “warm sunshine” and Miku calling Hibiki her “shining sun”—are pretty telling, and it seems that Miku is going to play a much bigger role in the fifth season, so perhaps we’ll get more moments similar to what we got in G (before they kiss and make up)? 😛

All in all, the characters ended up being a mixed bag for me. While the main group do their usual thing, I found the new additions to be so-so at best. Hibiki and Miku’s relationship takes center stage, but more time spent together would’ve been nice, as would more moments for the other ships.

Moving on, what more is there to say about the production values? Satelight has gussied up AXZ‘ visuals accordingly, but it’s largely the same song and dance as before. This series is still Michael Bay-esque in its excess of action, and I don’t want to beat a dead horse here, so let’s just say that if you’re a fan of the music in previous Symphogear seasons, you’ll like what AXZ offers, since practically nothing has changed. If it ain’t broke, don’t fix it, I say. The themes aren’t my favorite for this series, though they’re still fine. After all, I won’t complain about another ED from Chris.

Overall, I was a little disappointed with Symphogear AXZ. The series’ signature over-the-top action is still there, but I didn’t care for the villains as much as I had before, and that greatly affected my perception of it. However, almost everything else is as expected, so I doubt Symphogear fans will be too disappointed with what season four had to offer. Now, bring on the next one~ 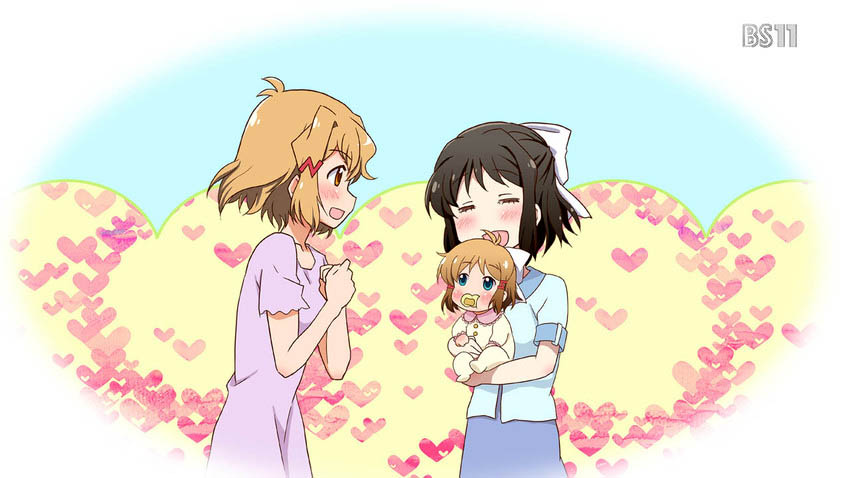