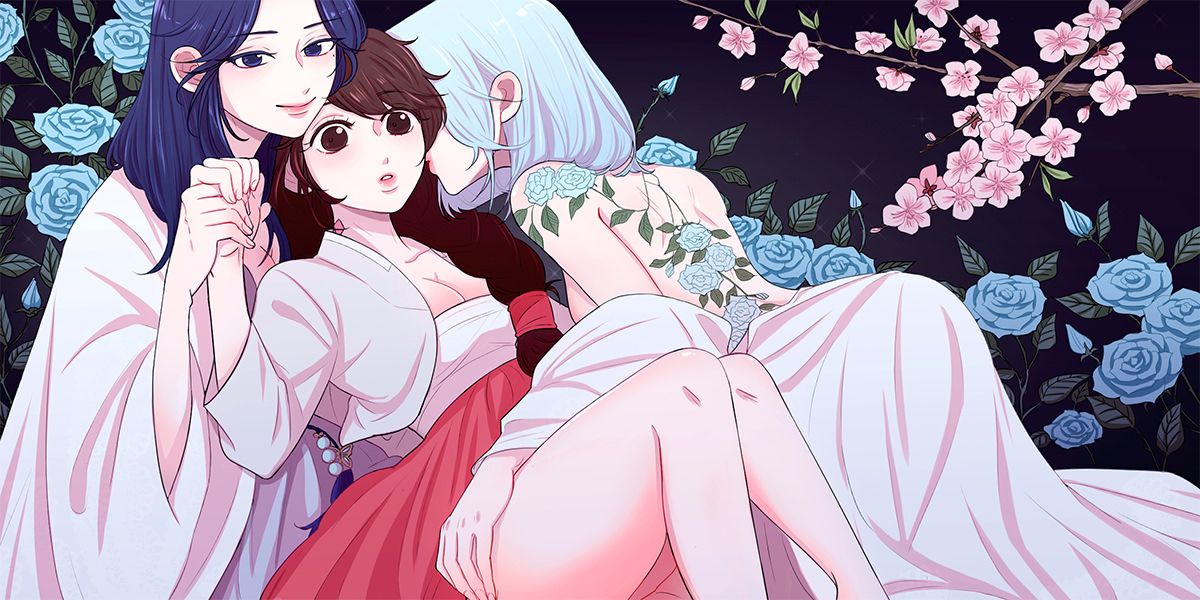 The flower maidens of Moonlight Garden are desired by all, as they are known to provide sexual pleasures beyond the imagination. The story follows Dohwa, a young flower maiden who has not yet “bloomed.” She creates potions in the hopes of escaping her fate at the brothel. One night, she is caught stealing ingredients for her potions by Lady Hyewon, the new mistress of the Garden. But it turns out Dohwa isn’t the only one with an objective. Lady Hyewon harbors a few terrible secrets of her own.

This is a refreshing concept because it isn’t set in a modern setting. It is set in a historical period which is shown by the clothing the characters wear.

Now, what are flower maidens? Let me explain the concept.

As infants, flower maidens are born with a flower mark that will be on a part of their body. The mark determines the type of flower they are.

They become adults when they bloom. The “bloom” is a monthly event where a flower maiden feels intense pain and lust. In order to get rid of the pain and lust, another woman has to have sex with her (this sounds like omegaverse, but it’s with flowers this time). If a woman beds a blooming maiden, the woman will also feel the pleasure. The pleasure comes from the flower maiden’s body.

There are flashbacks, but there aren’t a lot, so it’s not confusing.

The characters definitely drive the plot. To me, no one felt unnecessary to the plot. They contributed to it in some way.v

Dohwa is the peach blossom maiden. Her mark is located on her neck. Her hair is covering it.

Dohwa – The protagonist. A young flower maiden/kisaeng who wants to leave the brothel, but she needs to create a potion first. The potion that she wants to create is an antidote which she believes will get rid of the monthly “blooming” event so she doesn’t have to deal with it every month. She is a good person and doesn’t like it when someone insults the flower maidens. She clashes with Lady Hyewon because Lady Hyewon looks down on flower maidens.

As seen below, a non-flower maiden can be a kisaeng.

A noblewoman (Yellow) and a kisaeng (Red)

The text in the picture is referring to a drinking game where the less you drink, the more clothes you must take off. Here, the kisaeng lost.

Lady Hyewon- The Mistress of Moonlight Garden. She’s a noblewoman. A cruel person if anyone tries to start a fight with her. She likes to pick on Dohwa. When she talks about Dohwa, she reminds me of the “I had a crush on a girl, and I didn’t know how to handle it, so I wrote a letter to her that just said “get out of my school” tweet.

In this context, mistress means like the head of the brothel. Her role is to attend parties, bed flower maidens, and do noblewoman work.

Yoosun – Hyewon’s secret lover. She is the blue rose maiden. This is what a flower maiden in “bloom” looks like. The flowers will come out of the (diamond shaped) seed, and it will spread all over the body.

Lady Hyewon’s Bodyguard – Her duty is to protect Hyewon from anything. A mysterious character who wears a mask. She is my favorite character so far.

The art is pleasing to the eye. Honestly, the cover art for this manhwa lured me in, as it showed two women double-teaming the protagonist. As I read the manhwa, I felt that the artist, MissPM, knew how to present the story as it is being told.

The brothel serves noblewomen only, so it’s full of yuri moments.

The story says that if a man tries to bed a blooming maiden, the flower on the maiden’s body will wilt, and the man won’t feel the pleasure. Don’t worry, the manhwa doesn’t actually show the act, it just mentions it. However, men do exist in this manhwa, and it is in the form of Dohwa’s dad and the guards that patrol the brothel.

I gave it a 9/10 because I don’t know what is going to happen next. The next plot development could make me dislike the manhwa or maybe not, but I like it so far, so let’s see what will happen.

If anyone is interested, here is the link to the manhwa.

Three parts are free to read. This manhwa is NSFW, so be aware of your surroundings. If you would like to read more of this manhwa, let me know in the comments section, and I will see what I can do for you.