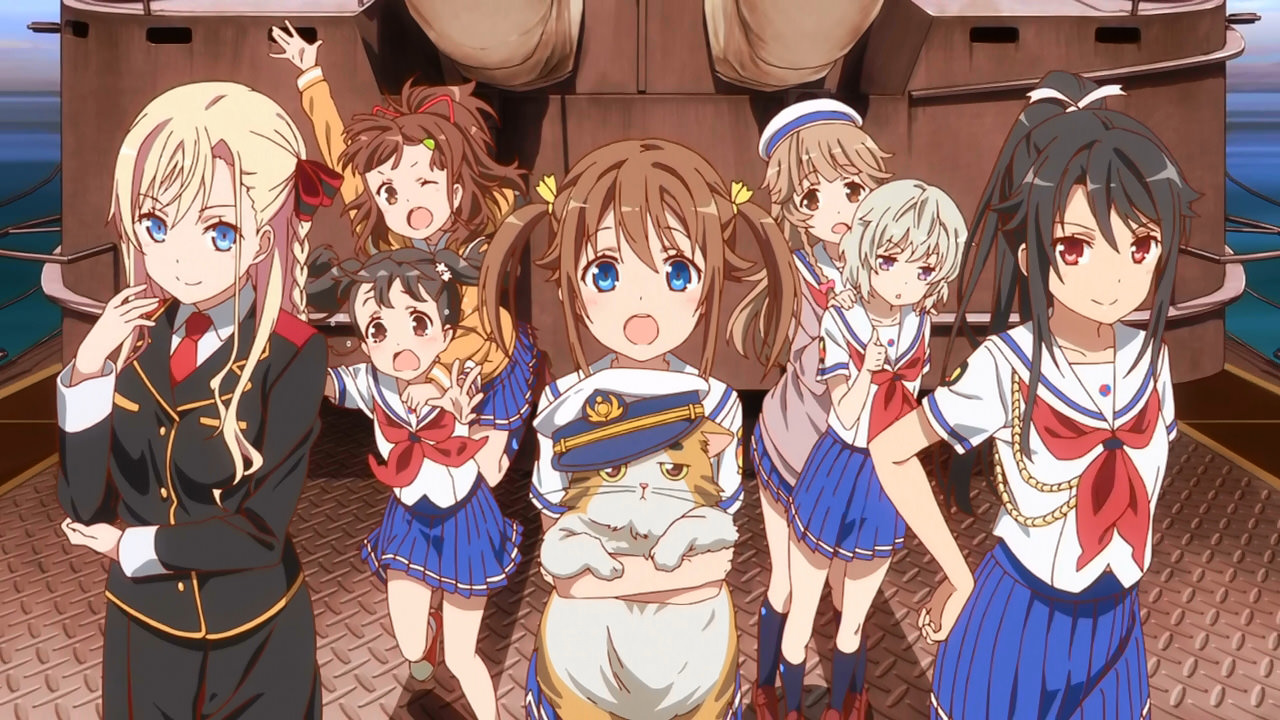 High School Fleet is an anime from last year that I remember someone recommended me to look into, and it’s only taken me over a year-and-a-half to do so. From a yuri perspective, was it worth it? Ehhh…

Synopsis: A hundred years after catastrophic shifts in tectonic plates caused most of its area to submerge, Japan now thrives as a maritime nation. High functioning cities line the coasts of Japan, and well developed sea routes are defended by specialized naval ships. The marine industry is flourishing, and young girls are eager to join the Blue Mermaids—highly skilled women who devote their lives to protecting the seas.

After some time apart, childhood friends Akeno Misaki and Moeka China are reunited at Yokosuka Girls’ Marine High School. Here they are joined by others who share their dream of becoming Blue Mermaids. Soon, training exercises commence, with Akeno and Moeka being put in charge of their own ships and crew. Everything is progressing smoothly for Akeno as she settles into her role as captain and builds camaraderie between her fellow crew members aboard the Harekaze, a destroyer ship. However, unexpected engine and navigation failures soon leave their ship stranded and the crew in danger.

High School Fleet follows the Harakaze’s valiant crew as they navigate treacherous waters and other obstacles on their quest to become fully fledged Blue Mermaids.

From the outside looking in, it might seem that High School Fleet is something along the lines of Girls und Panzer on the high seas, but that’s not the case. Seeing as how much I liked Girls und Panzer, I’m not sure if that’s a good thing or a bad thing, but HSF turned out to be a more serious take on war games. I thought this wouldn’t be much more than cute girls doing cute things on ships, yet it’s surprisingly heavy on action and drama, which turned out to be a fairly enjoyable combination.

Neither the action nor the drama are particularly noteworthy (especially the drama), however, it’s the bizarre plot twist that sees a virus/disease (scurvy! Okay, not really…) spread amongst the students—turning them into mindless minions of some nefarious entity—that really shakes things up. Yeah, it’s ridiculous, but I’d be lying if I said I was expecting something like that in this show. Without that turn of events, HSF might’ve been completely forgettable, so maybe this was a blessing in disguise.

It’s also a little hard to believe that with practically no adult supervision, a group of high school girls would be given free reign to command a warship, especially when they have yet to complete nautical training. The drama in this show can feel a little contrived, and despite cannons and torpedoes being fired from one ship to another, you kind of got the sense early on that this was one of those shows where the characters wouldn’t suffer anything more than scratches, which negated some of the drama for me.

“For all intents and purposes, this show only has female characters, so while it’s natural to ship some of the girls together, I was a bit disappointed in the level of subtext.“

For someone expecting “Girls und Panzer in boats”, High School Fleet was a pleasant surprise, however unusual and unrealistic it might have been. If you can throw logic out the window and just embrace the nonsense, there’s an entertaining story here that marries action on the high seas with a little bit of slice of life, resulting in a surprisingly watchable anime.

As for the characters, individually, they don’t appear to be all that special, but as a whole, the cast turned out to be pretty decent.

“Decent” is probably the best compliment I can come up with for Mike, who’s one of those protagonists that I generally don’t enjoy very much. She’s your everygirl who winds up being the captain of the Harekaze, a smaller ship that’s home to a ragtag group of girls that weren’t thought of very highly. At times, she’s pretty inept in her leadership role, with Mashiro being much more fitting for the role of captain, yet this was one of those instances where a bland character gets outshined by several girls with lesser roles.

Mashiro, the Harekaze’s deputy captain, was one of those girls. The youngest daughter in a family with deep ties to the Blue Mermaid program, Mashiro was pretty much the opposite of Mike. Inadvertently cute but still very professional, she’s a likable character that feels out of place on board the Harekaze. She makes up for a lot of Mike’s deficiencies as captain, and she was probably my favorite character in the entire show, but there were others that also made a positive impression on me.

Wilhelmina immediately comes to mind, as the German beauty eventually finds herself aboard the Harekaze after the shit hits the fan on board her own ship. If I could’ve had my way, I would’ve traded Mike for Wilhelmina, with Mashiro assuming the role of captain of the Harekaze, but that would’ve made too much sense. 😛

Maron and Kouko also left favorable impressions, and while Kouko had plenty of brief moments throughout the series, Episode 10 saw Maron shine as the person in charge of the Equator Festival. That was mostly a filler episode that gave us a lot of slice of life moments, yet it was fun nevertheless, thanks in large part to Maron. Oh, and there’s a cat that I liked better than some of the characters… 😀

Earlier I mentioned that I didn’t think this show wasn’t really watching just for the yuri, so let’s get to that. 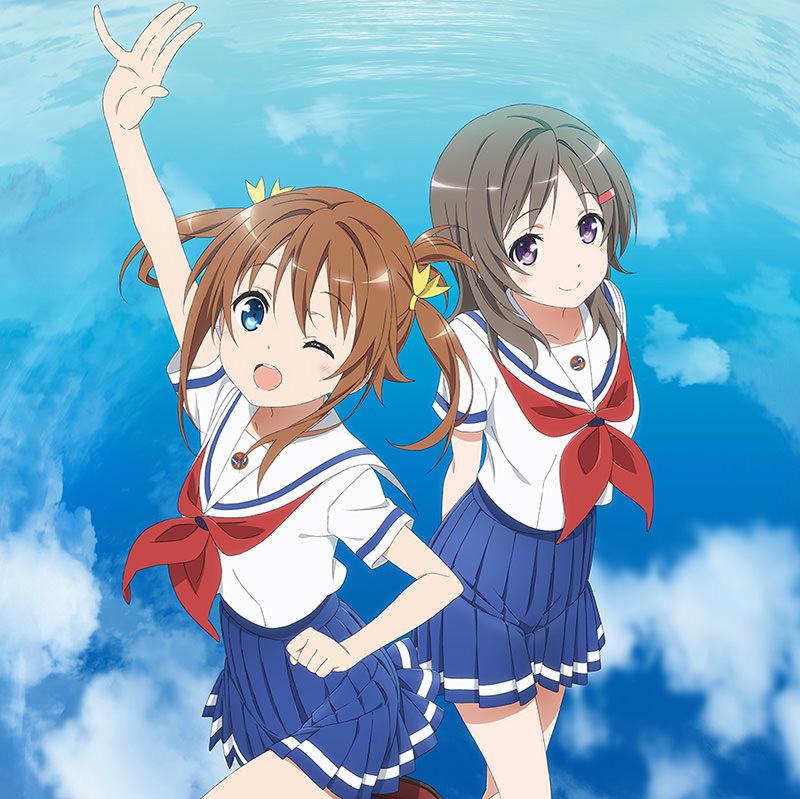 For all intents and purposes, this show only has female characters, so while it’s natural to ship some of the girls together, I was a bit disappointed in the level of subtext. Early on, I was thinking Mike x Moka would be the main pairing here, but Moka ends up as captain of another ship, so apart from the very beginning and the very end, she’s largely absent. As captain and deputy captain, Mike and Mashiro spend a lot of time together, but they don’t see eye to eye on a lot of things, so only in that “opposites attract” kind of way would you want to pair those two together.

One of the supporting characters that doesn’t get much screen time, Mimi, seems the likeliest candidate to be the show’s resident yuri character, but her fondness for Macchi is barely touched upon and is all but forgotten as the show turned more serious. You could ship Wilhelmina and Kouko together, as their shared love for Japanese gangster movies sees them form a nice bond, and they even have a couple of cute moments when Wilhelmina leaves the Harekaze and eventually returns.

That’s great and all, but I was honestly hoping for a little more subtext. Then again, Girls und Panzer wasn’t particularly heavy on the subtext, so maybe those comparisons are just, and my expectations were too high. Regardless, even though I wasn’t a fan of Mike, I think that this cast was greater than the sum of its parts, and overall, this was a pretty nice group of characters.

High School Fleet makes extensive use of CG, which is sure to turn off some people. I don’t think I’m one to immediately dismiss an anime that’s heavy on CG, but I’m unsure how I feel about it here. There are times when it genuinely looks pretty good and you know that a traditional hand-drawn style probably wouldn’t have resulted in the same visual quality, yet there are other times where it just looks so garish and awkward. For me, it wasn’t a deal-breaker or anything, but apart from the CG, this was a decent-looking show that I can’t fault too much. When it comes to the sound, I don’t think HSF is all that exceptional in this regard, but it gets the job done with some reasonably solid music that—while not being overly memorable—doesn’t exactly feel subpar. Overall, I think that the production values are more than sufficient, which is a pretty good word to describe this anime as a whole.

Back when I first started watching this anime last year, I had a hard time getting past the second episode and subsequently dropped this show. Now that I’ve finally given it a second chance, it turns out that my admittedly low expectations were exceeded. Though I still prefer Girls und Panzer as my favorite “cute girls doing cute things in military vehicles” anime, this is a very different show that was still pretty enjoyable nevertheless~ 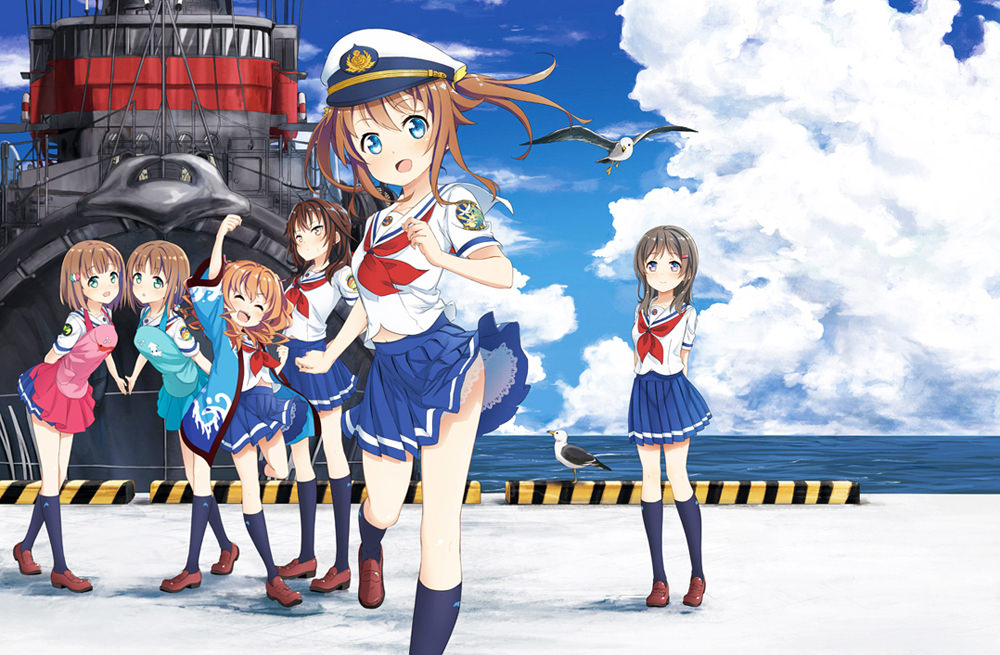