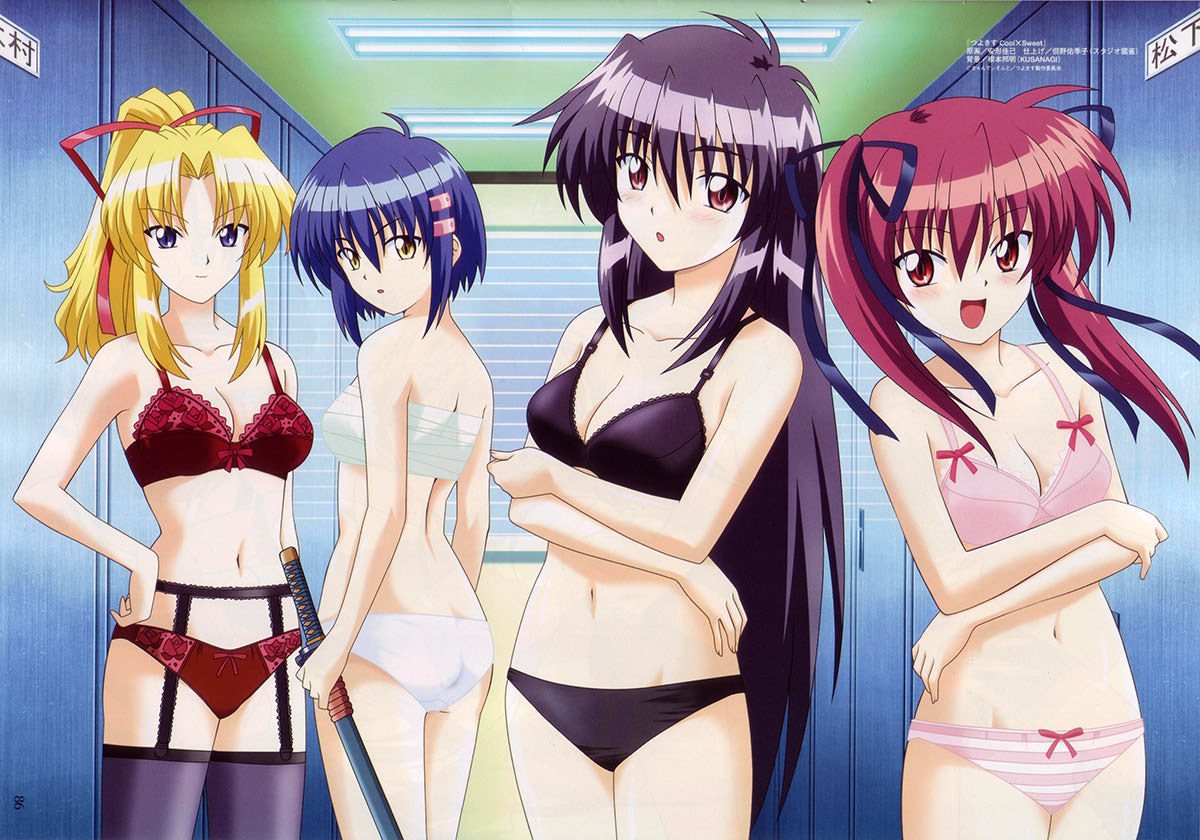 Tsuyokiss is an anime that I found while scouring the various yuri clubs of MyAnimeList, so why not give this lesser-known title a chance, right? Well, it wasn’t a huge waste of time, though, it wasn’t all that great either…

Synopsis: Sunao Konoe starts her first day at a new school and is surprised to find that there is no drama club. So, she decides to make one of her own. But between a childhood friend showing up, the crazy student body, and the arrogant student council president blocking her at every turn, it seems that actually creating the club is going to be more difficult than she thought.

The source material for this one is actually a visual novel with a very different storyline, yet there’s still a lingering sense of “been there, done that” with this show. A lot of the familiar romcom scenarios are here (part-time job, multiple festivals, etc.), and over the course of the show, the focus shifts from Sunao’s struggles to start a drama club to her romance with Leo.

Personally, I liked the Sunao versus Erika rivalry more than the romance itself, though, when a love triangle emerges, things do become far more interesting than they seemed earlier on. Thankfully, this anime didn’t devolve into a harem situation, since that was something that I feared could possibly happen. Sunao being a tsundere meant this romance went nowhere fast, and by the end of the series, I was a little underwhelmed with how things ultimately played out. I think one more episode might’ve been enough to avoid the feeling that matters were rushed towards the end.

Between a few of the characters, there’s a modest amount of character development, but at the end of the day, I didn’t feel like the story was that much better than mediocre. Had it not been for some interesting characters and relationship drama, things could’ve been far worse, so let’s get to those characters.

“In the very first episode, Sunao walks in on Erika in a compromising position with one of her female underlings (whom she gives the adorable nickname ‘Yoppi’), and right then I knew that it was a good decision to watch this show.“

For as generic as this anime can be at times, the characters are the least of its troubles. Say what you want about how they conveniently fit into established tropes, but there are several characters that are genuinely entertaining, probably none more so than Sunao.

For some of these slice of life shows, we’re given bland protagonists that I just can’t bring myself to like, though, I definitely don’t think that that’s the case here. Voiced by Nana Mizuki, Sunao rises above many of the pitfalls that plague other lead characters, and despite her tsundere ways, “Daikon” (as people call her) is actually pretty likable.

Let’s just lump all of the male characters together, since I think the same thing can sadly be said about all of them—they’re just not that great. Leo is the main male character, and while he’s not too bad, he kind of fits the bill as that bland protagonist I spoke of earlier. Shinichi is your stereotypical pervy male, and between him and Kinu’s angry rants, I think you’ll find plenty of things to be annoyed with. Subaru is one of Leo’s best friends, and it’s kind of appropriate, since he’s just as dull as him. However, he’s fascinating compared to Murata, whom I just can’t find anything to say about. It’s really the girls that add some life to the cast, including the show’s resident lesbian Erika.

In the very first episode, Sunao walks in on Erika in a compromising position with one of her female underlings (whom she gives the adorable nickname “Yoppi”), and right then I knew that it was a good decision to watch this show. 😛

Okay, I’m being a bit dramatic, but it was always cute to see Erika try to seduce Yoppi. The problem is, most of the time, Erika is busy making things difficult for Sunao, so there aren’t nearly as many scenes between them as we’d like. 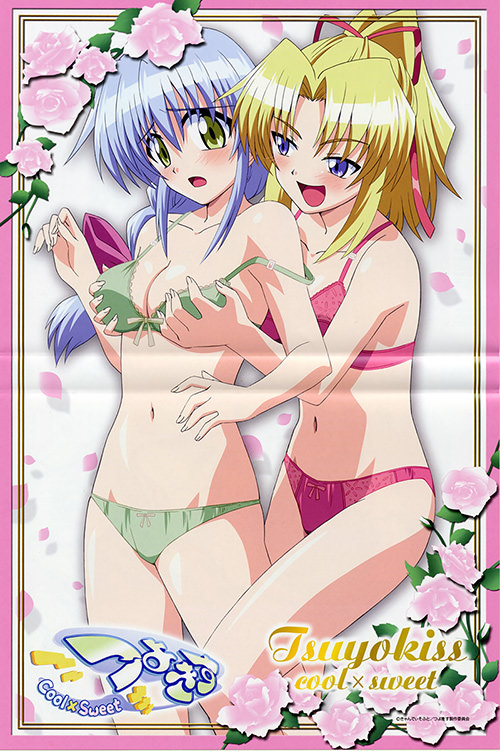 As for the others, Otome is your standard tough girl who carries around a sword. I think I have a soft spot in my heart for characters like these, so it’s no surprise that she’s one of my favorites in this show. Also, I think you can ship Otome with Sunao, so that’s an added plus. Kinu is the pint-sized loli with a brazenly foul mouth. She’s easily the most annoying female character, though, the show wouldn’t be the same without her. And then there’s Nagomi. She’s kind of like a combination of all the other main girls, so I guess that makes her the least interesting. Her family situation added a bit of seriousness to the proceedings, so maybe that’s not true.

All in all, this isn’t the best cast of characters you’ll find in anime, however, there are enough charming personalities to keep your attention. I honestly wasn’t expecting that much from the characters nor the yuri, but when it comes to the former, my expectations were slightly exceeded. The latter could have been more frequent, though, we’ll take what we can get.

Seeing as this anime first premiered all the way back in 2006, it’s tough to properly critique the visuals. I think an interesting way of doing that would be to compare it to another anime from 2006 that we’ve reviewed here on YR, Kashimashi.

Kashimashi is a fairly similar show (and they both come from Studio Hibari), so while neither one is much of a standout in this department, I’d say that Tsuyokiss is superior in nearly every aspect. There’s a little bit of fanservice to be found in this show, but even though I don’t know anything about the visual novel, I think I was expecting more. Color me surprised.

So if you’re not put off by the older anime look, the animation in Tsuyokiss shouldn’t be too much of a problem.

Moving on to the audio, aside from a couple of insert songs, the background music of Tsuyokiss didn’t leave that much of an impression on me. However, I thought that the voice acting was noteworthy. There’s even a character that has literally no voice lines, yet the strange noises she makes manage to somehow make her adorable.

One thing that irked me was how the sweet-sounding and pleasant ED got the full fanservice treatment and was accompanied by a slideshow of naked female characters from the show. Call me a prude, but was that really necessary? It just doesn’t seem like a very fitting combination, but enough about that. While the audio can easily be overlooked, there isn’t too much to complain about here, so take that for what it’s worth.

Overall, Tsuyokiss is a mostly pedestrian romcom that probably won’t wow anyone who’s seen their fair share of anime, but that’s not to say that it’s not somewhat entertaining. If you’re into romcoms, I think you can do a lot worse than this one, just don’t expect a lot of originality here. 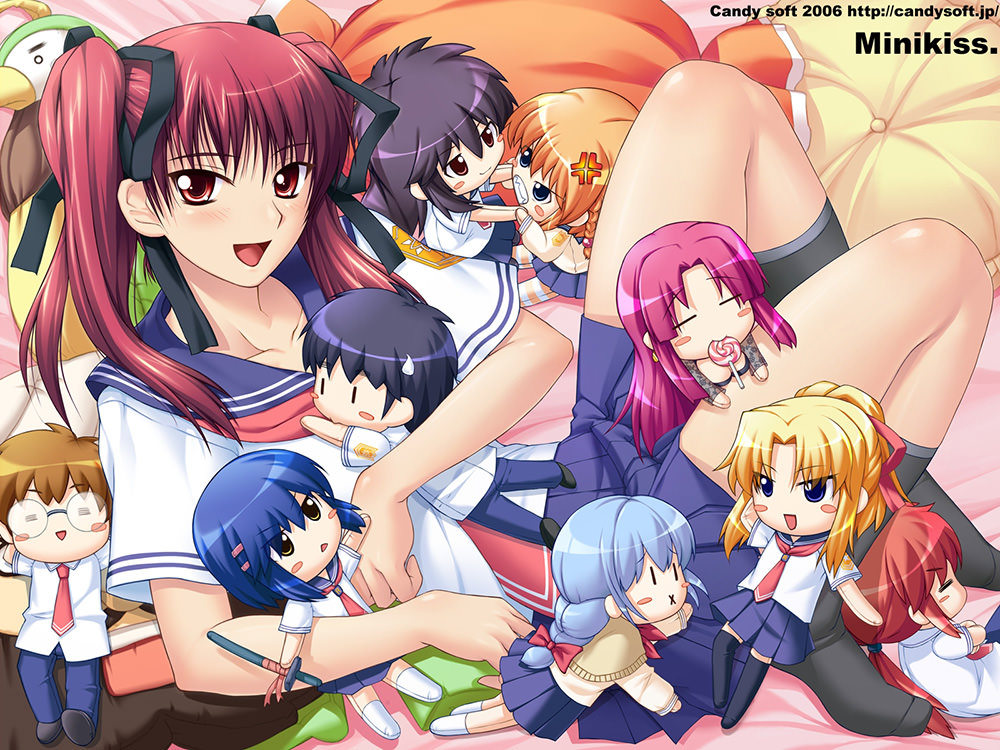