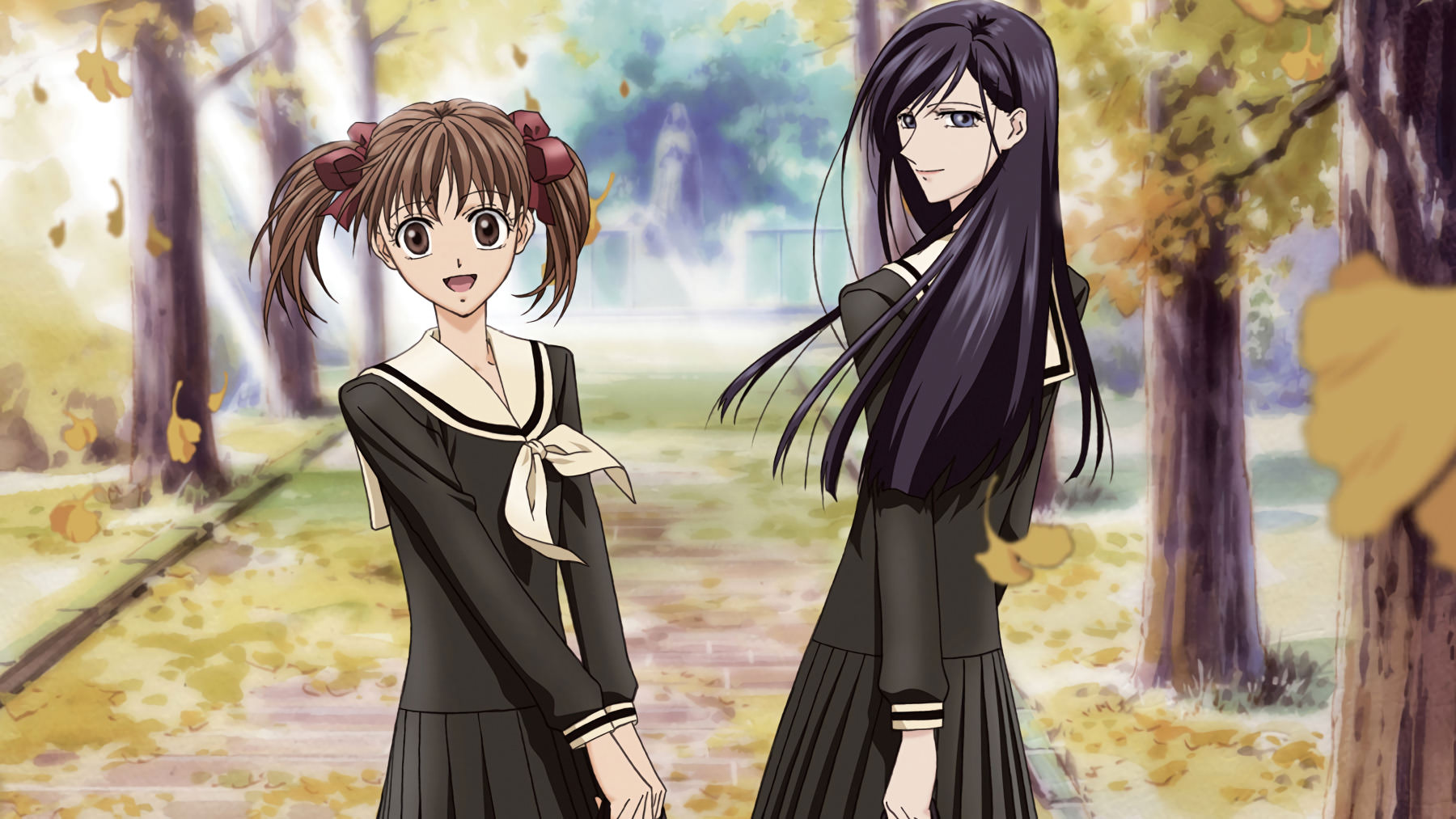 It’s been a while, but after almost five years of existence, one of the most important yuri anime of all-time finally gets a review here on YR. Let’s not waste anymore time and just get to it already~

Synopsis: When Yumi Fukuzawa entered the Lillian Girls’ Academy, a prestigious all-girls Catholic school in Tokyo, she never imagined she would catch the eye of beautiful and demure Sachiko Ogasawara, one of the school’s most popular students. Now Sachiko has offered to be Yumi’s soeur, her “sister” and guide for all her years at the academy. The whole idea has Yumi completely flustered—after all, they hardly know each other!

The entire campus is abuzz with rumors about the two of them, but Yumi is conflicted over accepting Sachiko’s offer. While she admires Sachiko, being her soeur would also mean constantly being at the center of the entire school’s attention!

You’d think that such an influential yuri anime like this wouldn’t have to wait several years to get a review on here, but for me, Maria-sama ga Miteru (or MariMite, for short) has always been intimidating. Whether it was the all-girls Catholic school setting, the perception that it would be an overly straitlaced and serious affair, or any number of other reasons, I’ve been wary of getting around to watching this series.

Now that I’ve managed to finish the first season, I’m wondering why I hesitated for so long. Despite outward appearances, the first season of MariMite isn’t as drama-filled as I expected. Yes, there are definitely times where things can get a bit heavy—Sei’s story arc immediately comes to mind—but I was surprised that things went as smoothly as they did.

Strawberry Panic this isn’t, though, I enjoyed how this was more of a character-driven story that had plenty of character development. If I were to compare it to another yuri anime, I’d say that it somewhat resembles Aoi Hana, thanks to the emphasis on the characters, as well as generally being a little more realistic than other yuri anime. Since Aoi Hana remains one of my favorite yuri anime, needless to say that I was more than content with how things played out.

Had MariMite pushed the romance aspect more—I’m looking at you, Yumi x Sachiko—I feel like this story could’ve been much more entertaining, yet the mix of drama, romance, and slice of life still was easier for me to enjoy than I thought going in. I’m sure some people might find this anime a little on the boring side, though, I’m glad that I wasn’t one of them. 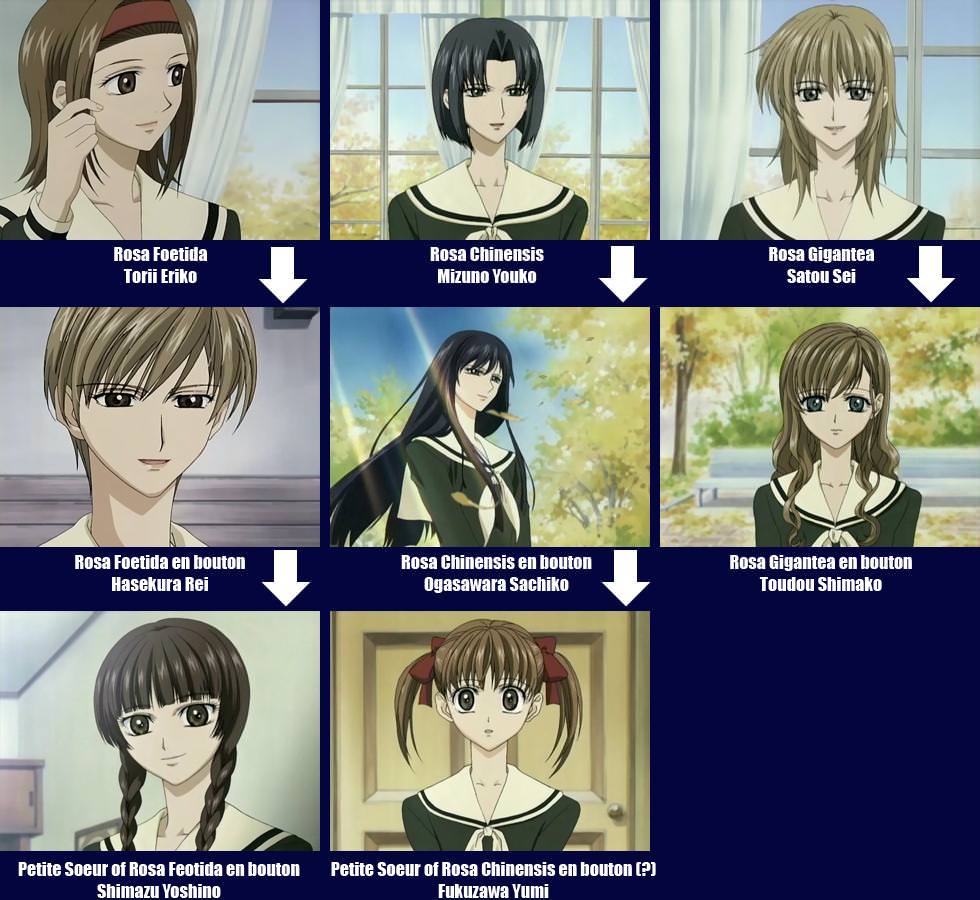 While I can’t say that I absolutely loved this cast of characters, I can say that many of them grew on me over the course of the season. Beginning with Yumi, she’s an ordinary high-school student the likes of which you’ve seen in so many other anime, yet her cuteness and innocence made her more appealing to me than a lot of similar characters from other shows. She’s not a very complex character, but she’s charming, and I think that she’s the type of person that makes it easy to root for her.

By “rooting for her”, I mean hoping for the best between her and Sachiko. Similar to how Yumi resembles a character type that’s extremely common, the same can be said of Sachiko. She comes across as the ideal ojou-sama, and it’s hard not to take a liking to someone like her. She ends up dealing with some emotional issues of her own, but throughout it all, Yumi is always there for her, so that was great to see.

Yumi and Sachiko are sort of interesting in their own way, however, it was someone else that completely overshadowed them, in my opinion. Of course, I’m talking about the Yuri Anime Legend herself, Sei.

“It should be noted that having an openly lesbian relationship in an all-girls Catholic school would likely be frowned upon, to put it mildly (and Sei would know this firsthand), so I don’t think it’s too much of a surprise that the soeur system in use at the academy skews more towards romantic two-girl friendship than anything else.“

Literally every other character in the anime conforms to the strict guidelines of the academy, yet Sei breaks the mold and is the only one who seems to play by her own set of rules. She’s playful, flirty, and completely unlike anyone else at Lillian. That’s great and all, but underneath that lively exterior is someone that’s actually incredibly caring, and over her two episode story arc, my perception of her completely changed. I liked her before, but that was enough to put her over the top and make me completely understand why she’s definitely a yuri anime legend.

Naturally, Sei is by far the biggest contributor to the yuri in this first season, and without spoiling things, let’s just say that she’s part of the most serious and emotional relationship in the show. There is no Amane x Hikari-like sex scene here, and a kiss is really the furthest things go from a physical standpoint, yet there are other ways to express your love for someone, so this was still very satisfying.

Sei’s petite soeur is Shimako, who seems to be the complete opposite of Sei. Honestly, out of the eight girls shown in the picture above, Shimako was probably the least interesting to me. Okay, check that. Eriko—who seems to be Ritsu (from K-On!)’s twin—earned that title, but I just couldn’t bring myself to care all that much about Shimako. 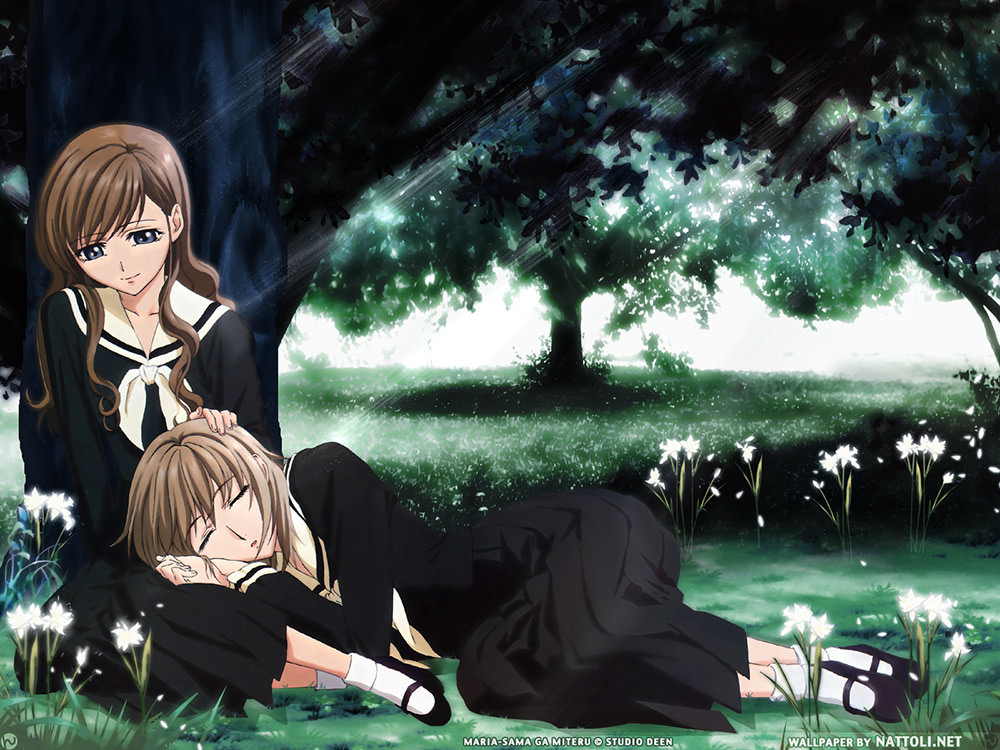 Rei and Shimazu appear to be involved in a more serious relationship than Yumi and Sachiko, which probably contributes to me liking them quite a bit. Since it’s an all-girl’s school, you gotta have a bifauxnen character, and Rei is that character. It’s cute how she’s surprisingly feminine, while Shimazu is the one who’s a little more of a tomboy, and there’s just more happening in their relationship compared to Yumi and Sachiko, so I found their relationship to be more entertaining. I wouldn’t have minded if Shimazu was a little less melodramatic, but that’s the only real issue I had with those two.

It should be noted that having an openly lesbian relationship in an all-girls Catholic school would likely be frowned upon, to put it mildly (and Sei would know this firsthand), so I don’t think it’s too much of a surprise that the soeur system in use at the academy skews more towards romantic two-girl friendship than anything else. That’s certainly not the case for every pairing, but even then, the heavy subtext makes it obvious that something is most definitely afoot.

Also, it wouldn’t be right to leave out the Rosa Chinensis herself, Youko. Among the three Roses (Chinensis, Foetida, and Gigantea), Youko is generally viewed as the leader, and she also happens to be Sachiko’s grand soeur as well. Actually, for most—if not all—of the season, you could argue that Sachiko had a closer relationship with Youko than she did with Yumi. Yumi even realizes this herself, but once we see how much Youko really does care for Sachiko, it makes perfect sense. I don’t really have anything negative to say about her, though, she wasn’t incredibly memorable for me either.

In my book, Sei is the big winner, when it comes to the characters. While the other girls may have likable traits and personalities, there’s just a certain something missing that Sei manages to have in spades. If you’re looking for a yuri anime that has kisses or other physical contact, you’re likely to be disappointed with what MariMite has to offer. However, if you’re in the market for a more personal and tender look at the purest form of love, I think you may have found what you’re looking for~

Almost fourteen years. That seems like an eternity, but I was actually kind of little impressed with how MariMIte looks. The basis for this are the beautiful character designs, which generally lack the moe aesthetic that saturates the current anime landscape. It’s a style that’s pretty refreshing, as everyone is long and lanky and they really pull off the refined, ladylike look to a T. The overly large eyes can seem a little weird, but I think that can sometimes makes character’s faces seem more expressive, especially for someone like Sachiko.

Aside from the characters themselves, the rest of the art is more or less average, so it seems the bulk of the effort was spent there. Visually, this is a very simplistic anime that doesn’t stray too far from what is expected, but even though this is an older anime, I don’t think it’s too much of a stretch to say that it has a timeless look that has aged gracefully~

Moving on to the audio, the music of MariMite makes extensive use of strings, woodwinds, and the piano, giving it an elegant and majestic sound that perfectly fits with the theme of the series. As lovely as it may sound, for me, this style of music doesn’t come across as incredibly memorable, save for the lovely OP and the fitting inclusion of Schubert’s Ave Maria. All in all, the presentation couldn’t be more suitable for an anime like this, and together with the visuals, they combine to really sell the setting of an all-girls Catholic school.

In the yuri world, so much has changed since MariMIte‘s premiere, and a good portion of that is a direct result of this anime. It’s probably not the most exciting or captivating yuri anime that you’re ever going to watch, but MariMite remains a foundation piece for yuri anime. Whether you end up enjoying it or not, I think everyone owes it to themselves to at least take a look at this iconic anime. 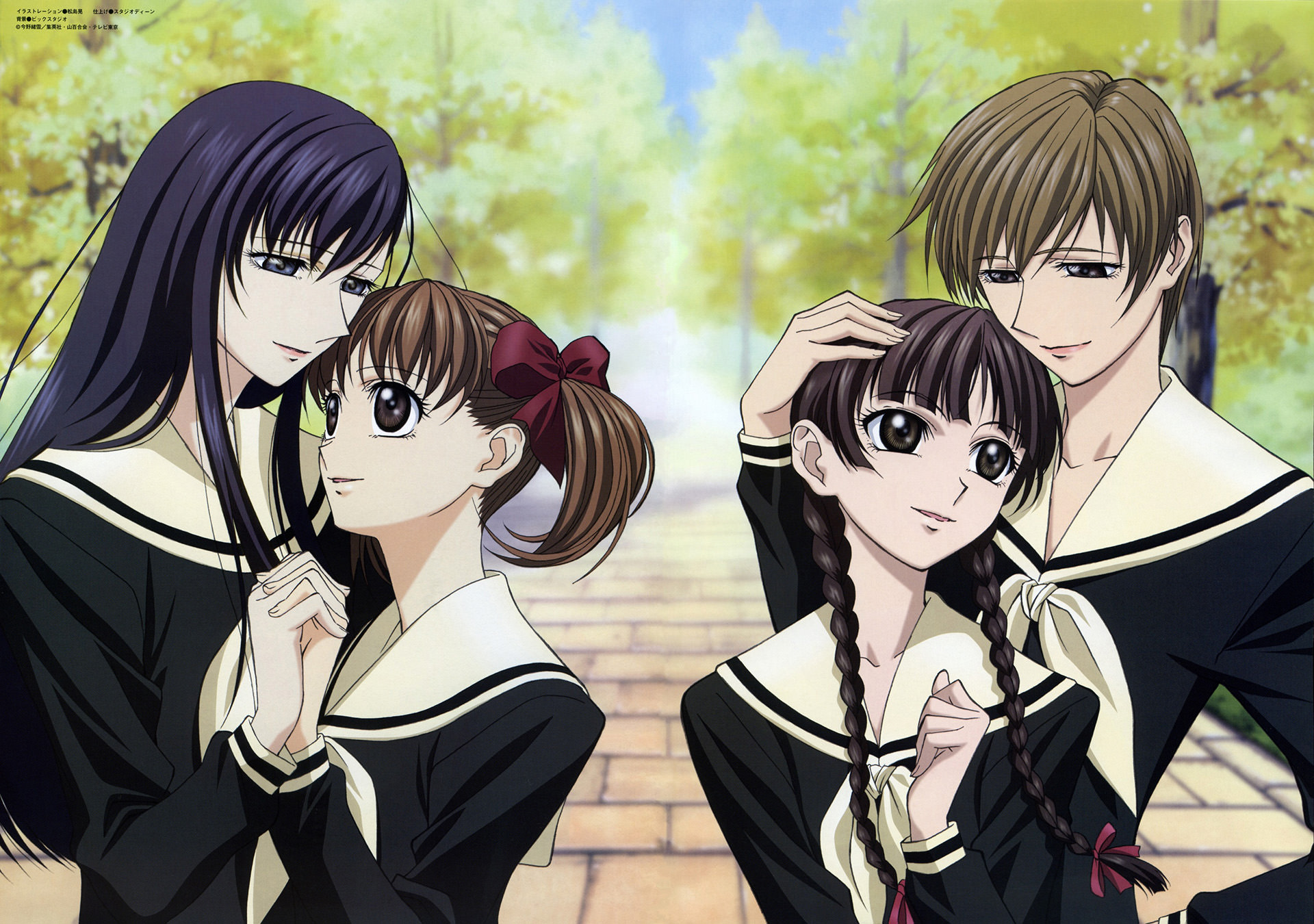