What?! Another News Update in less than a week? Is that possible? Yup, it is, and it seems to be reaccuring thing in our community. Awesome!

So what is it today? More yuri visual novels maybe? Well, that would be awesome but nope, even better! Another yuri anime was announced!

Tachibanakan Triangle, or as it’s called in English, Love to Lie Angle, is a comedy manga by merryhachi, and it will get an anime adaptation in 2018.

This one is actually featured in the Yuri Hime magazine, so we know it’s gonna be good (and actually have some yuri). Though, to be quite honest, I haven’t heard of this one yet, despite the fact that the first few chapters are available to read on the Dynasty Reader. There are actually four volumes out already, and it’s still ongoing.

Well, shame on me! Have to catch up quickly, I guess. In case you haven’t heard of it either, there you go. Let’s read~

When Natsuno Hanabi went back to her hometown to study in high school, she thought that she will have a new wonderful life. But Tachibanakan, the dormitory she was going to live in, was not what she expected.

Visit the official website for the anime adaptation here.

To be quite honest, the synopsis doesn’t really give anything away and rather makes it sound a bit boring. Since I haven’t read it yet, I can’t confirm this. However, the internet seems to like it, and from the few things I already read about it, it seems to be a cute comedy with some ecchiness added to the mix. I think we can all agree that this might actually be a pretty good combination again. What do you think? 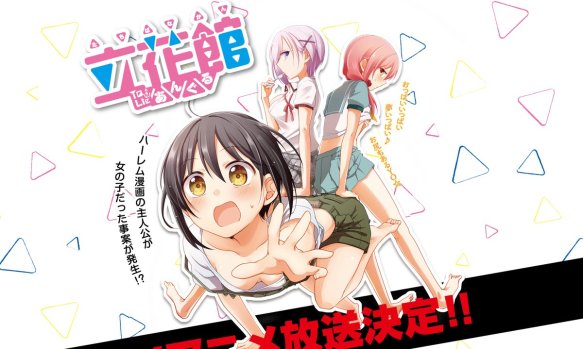