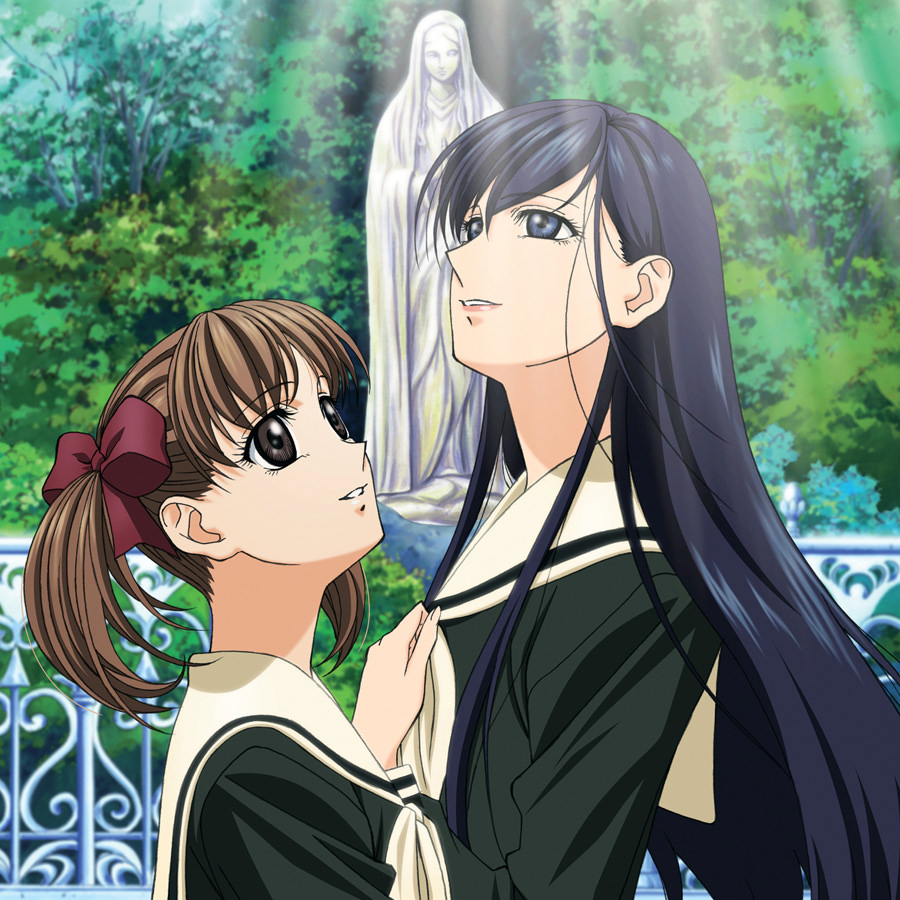 The MariMite review train just keeps on going, as this time, we take a look at Maria-sama ga Miteru: Haru~

Synopsis: The spring term is beginning for the students at Lillian Girls’ Academy. Friends are reunited, but for the Yamayuri Council, it’s a bittersweet time. Yoko, Eriko, and Sei are busy preparing to depart Lillian while Sachiko, Rei, and Shimako are doing their best to ensure that their dear sisters receive a memorable commencement.

Sei’s departure will leave a sizable hole in the White Roses, and filling it won’t be easy. But is there anyone who could appeal to Shimako enough to become the next Rosa Gigantea en bouton?

With Youko, Eriko, and Sei having graduated this season, the roles of Rosa Chinensis, Rosa Foetida, and Rosa Gigantea have been passed to Sachiko, Rei, and Shimako, respectively. However, I’m not really a fan of how things turned out, in this regard. Most of that is due to Sei’s absence, as she was the exception to the rule amongst the students of Lillian, and I didn’t feel like that role was adequately filled. I think it’s pretty telling that Sei is specifically mentioned in the synopsis, while Youko and Eriko aren’t. Sei still plays a minor role this season (complete with a stylish new ‘do), as does Youko—and to a lesser extent—Eriko, but I still prefer them over the new Roses.

One of my biggest gripes is that, for most of the season, absolutely nothing happens between Yumi and Sachiko. Season one saw the two of them as the main focus, but MariMite: Haru spreads the love around, and it isn’t until the very end that they get the spotlight and make up for lost time. Just to be clear, I feel like the final episode definitely made up for some of the neglect, yet I can’t help but feel disappointed that they spent so much time apart. At times, Sachiko has a personality that kind of makes her a difficult person to like, but there’s more going on with her than you see on the surface, so I don’t want to talk too badly of her. Still, I don’t recall her being as distant and apathetic as she was this season, and as a result, her and Yumi’s relationship predictably suffered, however, there were some other yuri bright spots.

During season one, Shimako never struck me as that compelling a character, and even though my opinion hasn’t changed, she gets her own arc that sees her become very close with another student, Noriko. This—along with the Yumi x Sachiko drama—felt like it was this season’s answer to Sei’s excellent arc from the first season, but to me, it paled in comparison. I like that we got another significant plot point, and one heavy in yuri subtext at that, but I’m just not really a fan of either Shimako nor Noriko. That said, I have a feeling that they’ll bring out the best in each other, so I’m still hopeful that that can change next season.

“After two seasons, I doubt MariMite will actually live up to the lofty yuri expectations I had coming into the series, but that doesn’t mean that it can’t continue to be a pretty enjoyable time for yuri fans~“

Rei and Shimazu see their relationship get its own episode, and these two I definitely like. The overall mood of the show seemed to be a little more serious this season, and their episode was probably one of my favorites. Out of all the “couples” this season, these two are the closest thing to an actual romantic relationship, but with the way they argue, it’s probably more like a marriage. I would have liked to have seen more of them, but their episode was pretty good, so I won’t complain too much.

And the less we say about Eriko’s episode, the better. I think that episode felt pretty out of place in an anime like this, and even though I think it was strangely entertaining, an entire episode devoted to Eriko’s love for a dinosaur-loving male teacher couldn’t be further from the reason I started watching this series. Out of all of the characters in the first season, she was probably my least favorite, and absolutely nothing happened that changed that.

In addition to Shimako’s new friend, Noriko, Sachiko also has a new admirer. Well, actually, it’s one of her relatives that she’s known for the longest time, but Touko gives this season a much-needed shot in the arm, and the love triangle of sorts that emerges between her, Sachiko, and Yumi was one of the highlights of the season for me. It’ll be interesting to see what her role will be in future seasons, but I’m kinda hoping for more drama. 😀 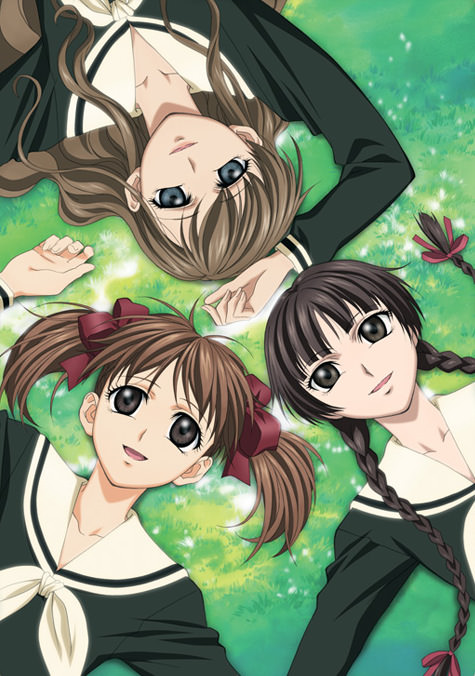 Oh, and there still isn’t anywhere near enough Tsutako. Feels bad, man. All in all, each of the new Roses encounter some sort of drama that threatens to derail their relationships with their soeurs, but while the pacing continues to be an issue with this series, there were plenty of things to like about the story and characters. The general lack of scenes involving Sei definitely affected how much I enjoyed this season, though, if I were to look past that, I have to say that Haru was still a nice next step in the story.

Despite the disappointment that was Yumi x Sachiko (and despite the lack of an official romantic couple, unlike season one’s Sei x Shiori), the other girls picked up the slack and kept the level of yuri subtext to a fairly high level. After two seasons, I doubt MariMite will actually live up to the lofty yuri expectations I had coming into the series, but that doesn’t mean that it can’t continue to be a pretty enjoyable time for yuri fans~

While the first season of MariMite premiered in the winter of 2004, Haru saw its debut in the summer, so this might as well have been a split-cour. As such, there isn’t much of a difference on the visual front. And you can say the exact same thing about the music. Both were fine enough as it is, so it’s not like it’s a bad thing. The most noticeable change for me was the return of the instantly recognizable OP—Pastel Pure—but this time, gone is the instrumental version, and a new vocal version takes it’s place. Take a listen~

Ehhh… I’ll stick to the instrumental version. They say if it ain’t broke, don’t fix it, and since season one wasn’t exactly lacking in production values, it’s probably for the best that Haru was more of the same.

Like the first season, Maria-sama ga Miteru: Haru doesn’t do itself any favors with some sluggish pacing that continues to be somewhat of an issue, and while it’s disheartening to see a beloved character like Sei be reduced to a minor role, there’s still a solid dose of drama and adoration among the closely-knit group of girls at Lillian Girls’ Academy, so if you enjoyed the first season, I think you’ll enjoy what this season season has to offer~ 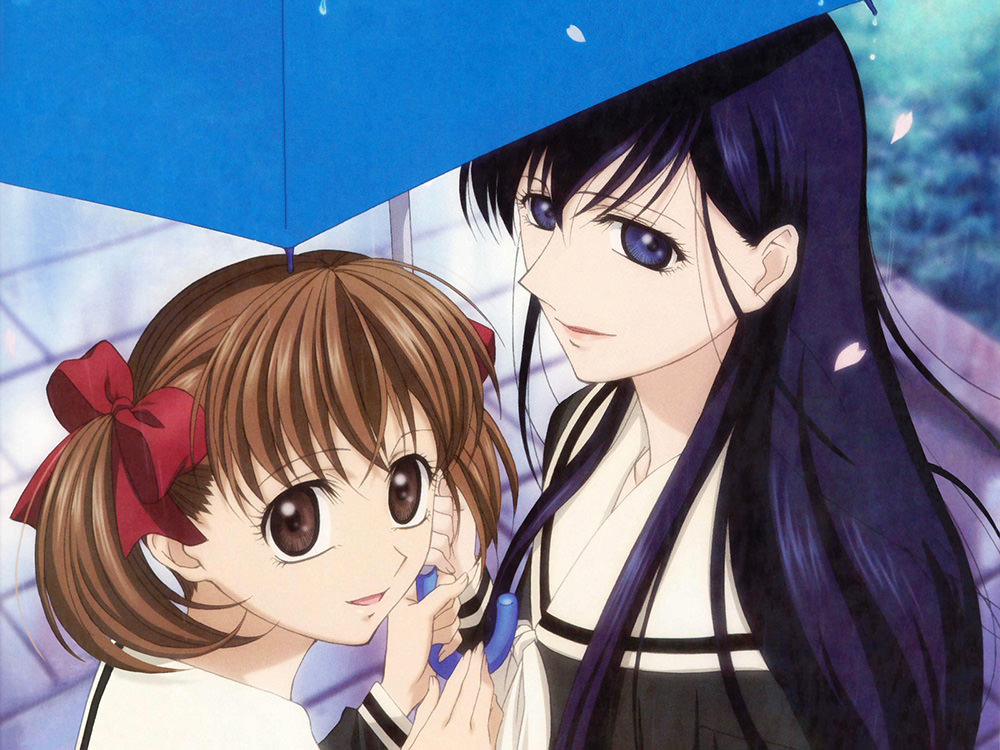