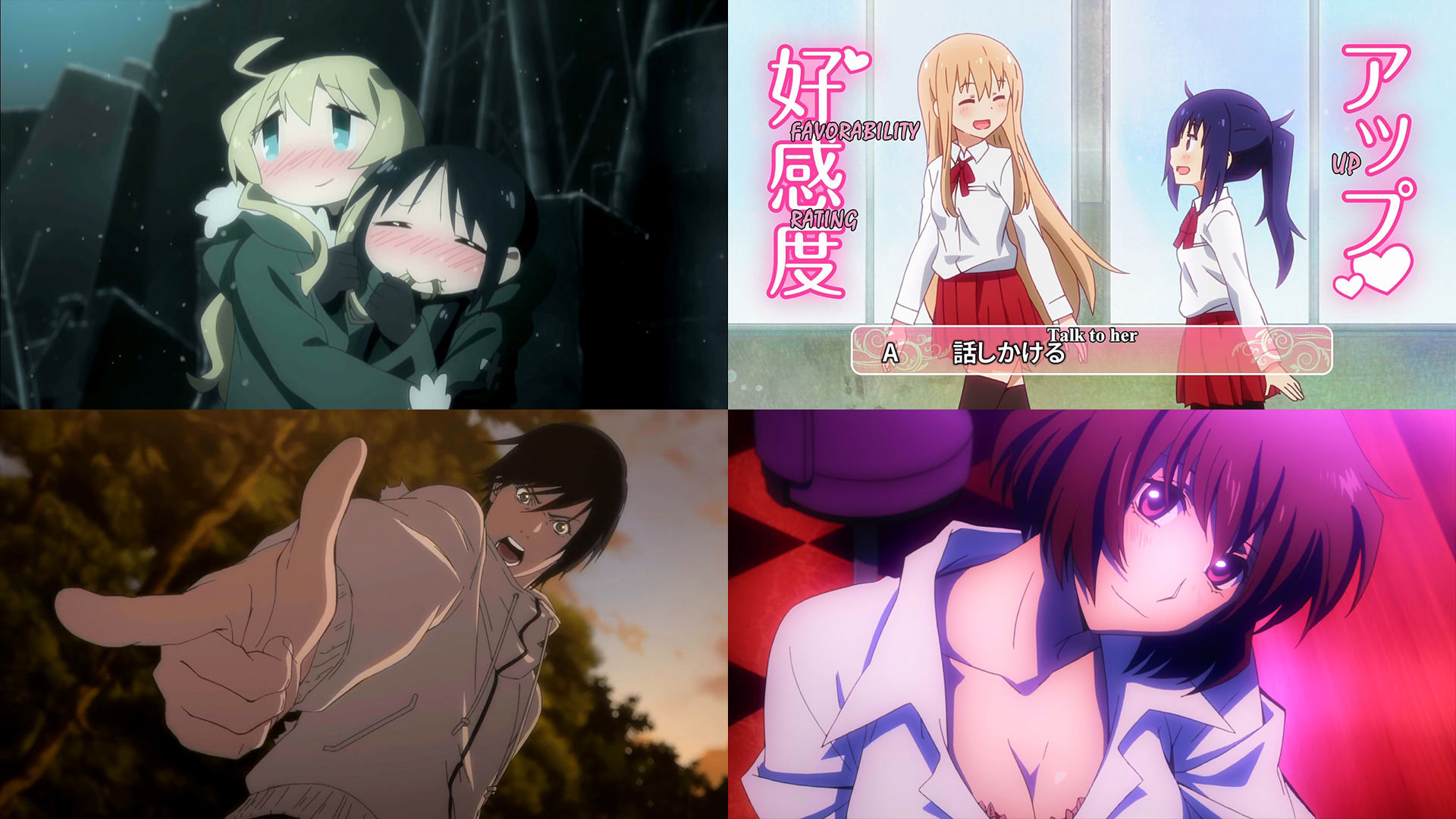 Don’t get angry with us, but neither of us finished the most recent Love Live! season yet, so bear with us, we’ll get there eventually. And since Konohana Kitan was a last-minute addition, it’s not included on the list, but it’ll probably get a review in the near future.

Anyway, enjoy our First Impressions of the fall anime season that just came to an end~ 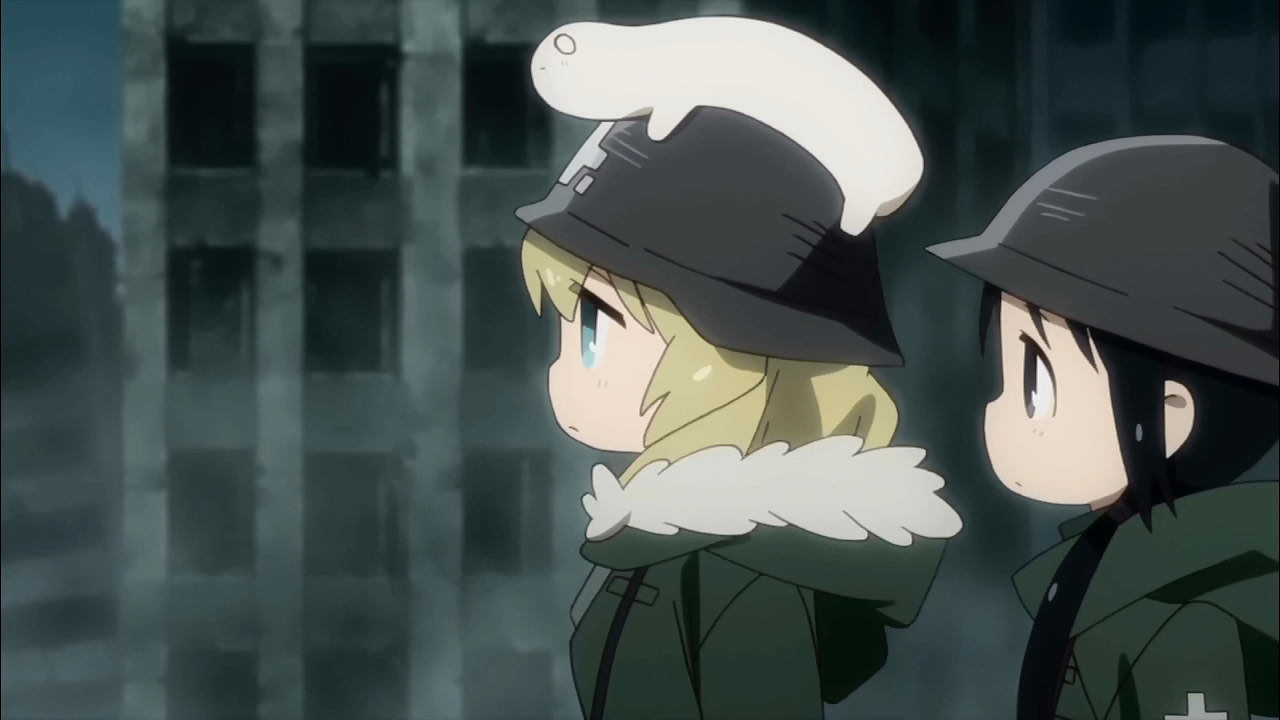 Out of the handful of shows that I picked up this season, this one turned out to be the most pleasant surprise. Whenever I see the “slice of life” tag attached to an anime, my expectations are already tempered, as I more or less have an idea of what to expect. Girls’ Last Tour has all the traits that I’ve come to enjoy from the genre, but it throws viewers a curveball in the form of a post-apocalyptic setting.

I gladly welcome any setting in this genre that isn’t a classroom, yet despite the dreary atmosphere, this never really felt too depressing. That can mostly be attributed to Yuu and Chi, whose chemistry together is perfect and I’d say that there’s just enough comedy and lighthearted moments to counterbalance the gloominess. Somehow, this turned out to be a really charming affair, and out of all of the shows I watched this year, this was probably the most easygoing and watchable one for me.

There isn’t that much to the story, though, it is intriguing how the world turned into this barren wasteland that’s devoid of life. War is hell, and by the end, the minor philosophical undertones add a little depth to the story, making this far from your average “cute girls doing cute things” anime. You’re probably wondering if there are any hints of yuri in this one, and sadly, the answer is not really. However, in my opinion, it’s still one of the better anime of the season, and out of all the shows that we’ve given scores of 8 to this season, this is probably my favorite~ 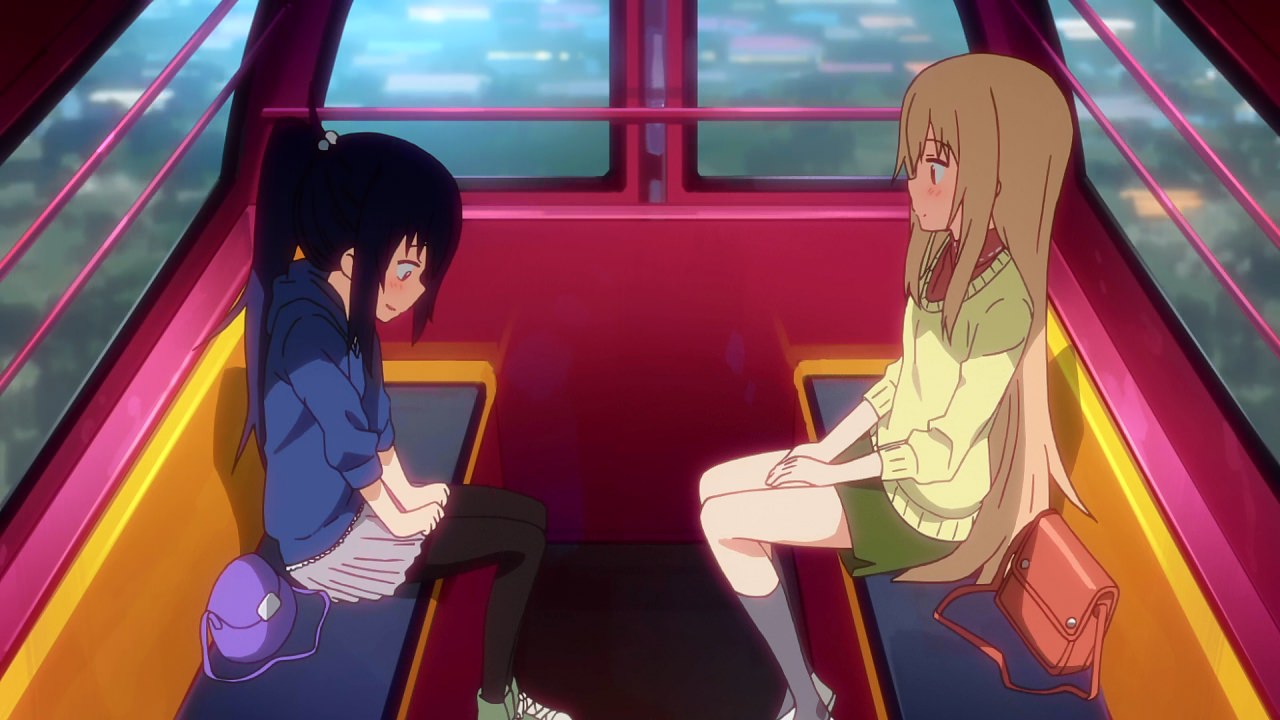 Before Gremlin D.Va played video games, chugged soda, and ate junk food with impunity, there was Umaru. The first season of Umaru-chan was just mindless fun, and with this second season, it’s every bit as entertaining as I remember. However, I’m still a little surprised that Umaru’s antics haven’t grown old for me yet. The formula is simple, but I guess it helps having such a good supporting cast.

Umaru may be a great (yet annoying) character, and Sylphin is pretty awesome in her own right, but for me, it’s all about Kirie. She’s just so damn cute and awkward that I can’t help but love her. The little moment she shared with Umaru on the ferris wheel was adorable, and overall, it seemed like the other characters may have had a little more of the spotlight this season, which is probably the best thing I could have asked for.

Out of all the shows I picked up this season, this is the only one with any yuri subtext. Well, it wasn’t all that much, yet the first season still wound up getting it’s own review on here, so perhaps this second season will eventually follow suit. All in all, I think Himouto! Umaru-chan R was at least as good as the first season, and maybe even slightly better~ 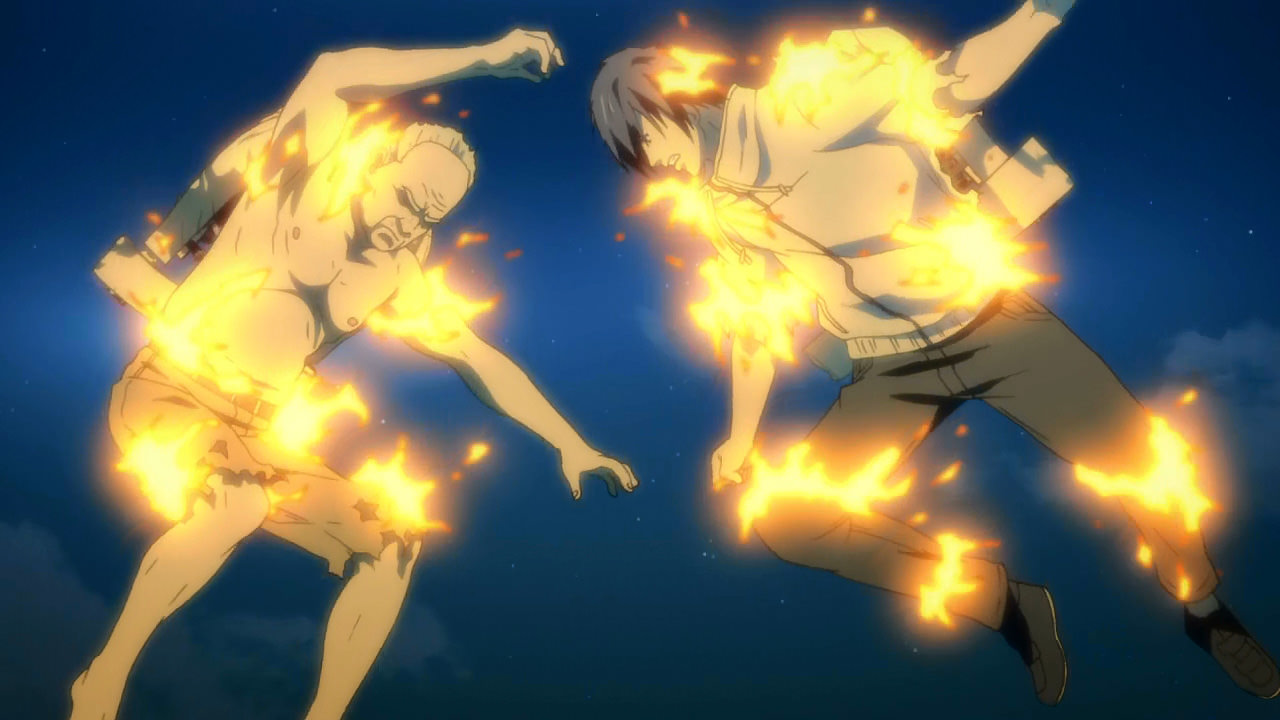 Inuyashiki is from the author of Gantz, so you’d think that it would follow suit and be uber violent, and it most definitely followed suit. I didn’t keep count, since this anime has a ridiculously high number of deaths, but it really seemed to embrace the violence. This was classic hero versus villain, as two normal people are killed in the crash of some sort of alien spacecraft, and they’re repurposed as killing machines. However, while one (an older man) uses this new lease on life to try and save those in distress, another (a younger guy) uses his new mechanical body to act on his innermost thoughts and become a serial killer, taking on a “the world is against me” mentality in the process.

The loss of one’s humanity—and how differently these two characters deal with it—is an underlying theme here, and it’s pretty interesting and unexpected. I think I was just expecting a more mindless action-oriented anime that wasn’t much more than these two guys just constantly fighting, yet this turned out to be a little more than that.

At some point, I think this show got carried away with trying to prove how evil Hiro was, and it just started to seem like overkill, especially in light of the long-awaited showdown between the two being underwhelming (as was the use of some questionable CG in those scenes). The asteroid bit at the end was completely rushed, but the show could’ve been far worse, so I’ll just be glad that this turned out to be a pretty entertaining action anime, warts and all. 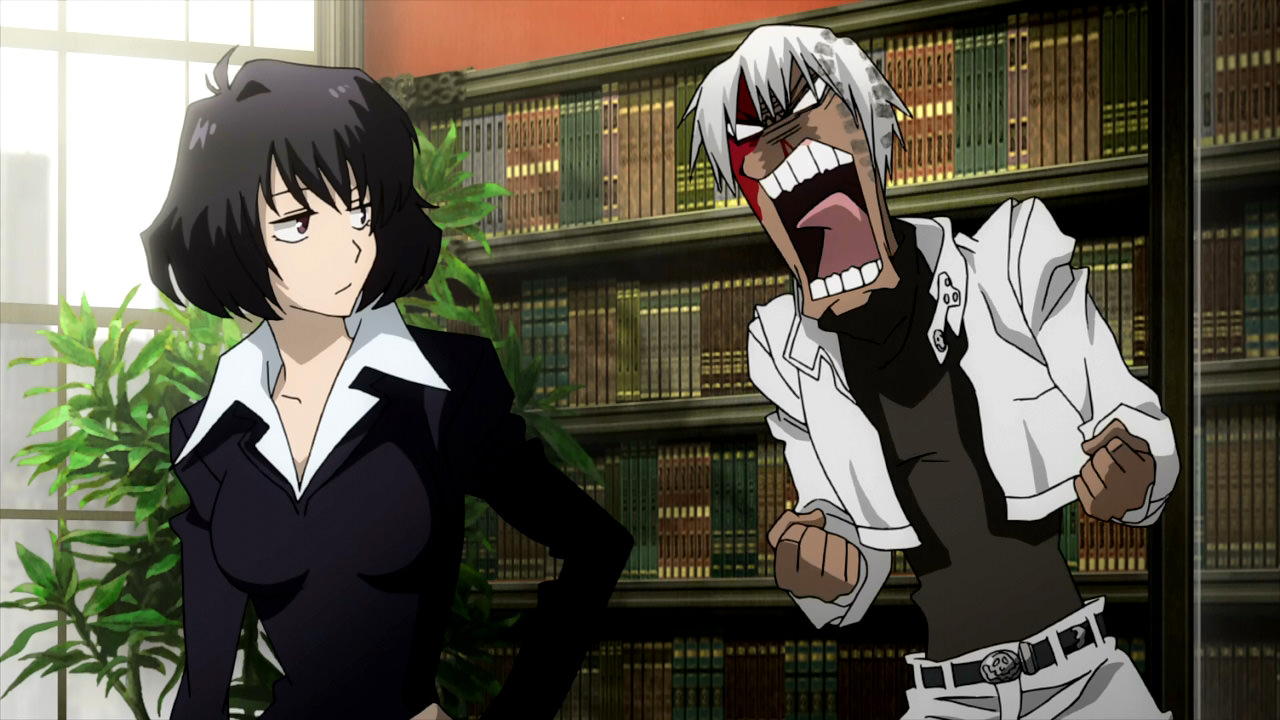 Whereas an anime like Inuyashiki takes itself very seriously, Kekkai Sensen has always been a series that strikes a great balance between over-the-top action and comedy. I think it helps that the story is a little lighter in tone than its predecessor (as well as being episodic in nature), with new threats emerging every episode that put Hellsalem’s Lot in even more peril. These threats usually don’t seem to be dangerous enough to warrant the full-extent of Libra’s capabilities, but a few characters get involved and that ultimately results in less lopsided (and more interesting) battles.

Speaking of characters, there are so many good ones here that you can’t help but feel that there are some that are being neglected. However, with this being the second season, it’s another opportunity to highlight ones that might have been underutilized in season one, so I guess you can say that one hand gives and the other takes away. This remains a fascinating world that’s full of personality, and in addition to the great characters, snazzy soundtrack, and crazy superhero antics, I think I liked this season slightly more than the first.

At least we didn’t have to wait an additional three months for the final episode to air this time, so that’s a major improvement. I think there are still a lot of interesting stories to tell in Hellsalem’s Lot, so I’d like to see a third season get made, if for no other reason than to see characters like Chain and Zapp once more~