I usually don’t post mid-way impressions of shows, but for Citrus I think I’ll have to make an exception, as I yet again have quite a few things to say.

As you remember from my First Impression of the show, I was literally blown away by how awesome it looked and felt. I pretty much saw it as the perfect adaptation of a manga like this and went into the next episode with my expectations ridiculously high.

Of course, what followed was a bit of disappointment, as episode two, in sharp contrast to what we saw in the first one, was rushed and so fast-paced that I had difficulties following all the events taking place. Too many manga chapters were cramped into this one episode, which made it hard to focus on one thing for longer than a few seconds until the next big event took place. Exactly what I liked about the first episode—namely the addition of scenes that were not in the manga or the focus on specific minor scenes—was completely missing. I would have loved to have seen Yuzu actually think about her actions a bit more, as the anime version should have given us more room for inserting inner thoughts or more depth to complex emotions and intentions in general. But instead, we saw her rush into everything, often having to guess what she’s doing or thinking, which in my eyes is the result of this fast pacing.

I’m sure they simply need to cover enough chapters to make it to a point in the manga that would feel like a good or sufficient end to the anime. Since we already saw Nina and Sara in the opening, I’m guessing the anime will end on this arc, which in my eyes seems to be a lot of content to cover (or 16 chapters, to be exact). This basically means they can’t only cover one chapter in each episode, but then again, at least they don’t have to cover two every time either. Well, the anime might as well cover a bit more content than what I’m expecting or even add some new content in. Who knows, really?

Bottom line is, I just hope that they’ll slow down the pacing a bit and have important scenes get the time they actually need and deserve, in order for them to have the desired impact.

After episode three, I think we’re on track again. The episode felt way more natural than the second one, and it gives me hope that the pacing will stay like this for the rest of the season. 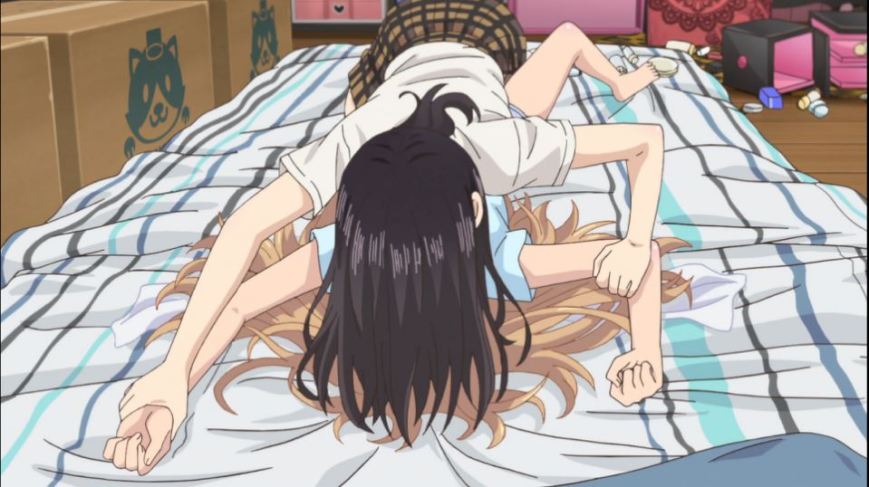 What I also hope is that with the forced kisses of the first volume out of the way, we can hopefully look forward to a bit more “nice-looking” ones. I know that the anime has often been accused of looking too rapey, and I agree. With the two kisses of the first episode, I totally agree that, not only the one with the teacher, but also the one between Mei and Yuzu, were simply supposed to look and feel like they did. Nothing about these two kisses happened because both parties wanted it, and it sure made me feel uncomfortable watching it, which is good. The scene with Mei pushing Yuzu down and literally forcefully undressing her in episode two, however, came as a surprise. While it did follow exactly what was shown in the manga version, the music and the way Mei was depicted as this dark figure hovering above Yuzu, made me feel more uncomfortable than I would have liked. Back when I read this, as well as the infamous shower scene, I was sure it was only there as eye candy for the readers. Simply two nice extra scenes to cover up the yuri content that was required in each chapter. None of it really felt this heavy or bad. The anime version goes a different route in my eyes, though, as it is made painfully clear that this is not just fun and games. And even though many people criticize the anime for exactly that, I think it’s good that way. However, I’m still looking forward to seeing some kissing scenes that are actually nice to look at.

Oh wait, I forgot about that one…

33 thoughts on “Let’s Talk (Some More) About Citrus”