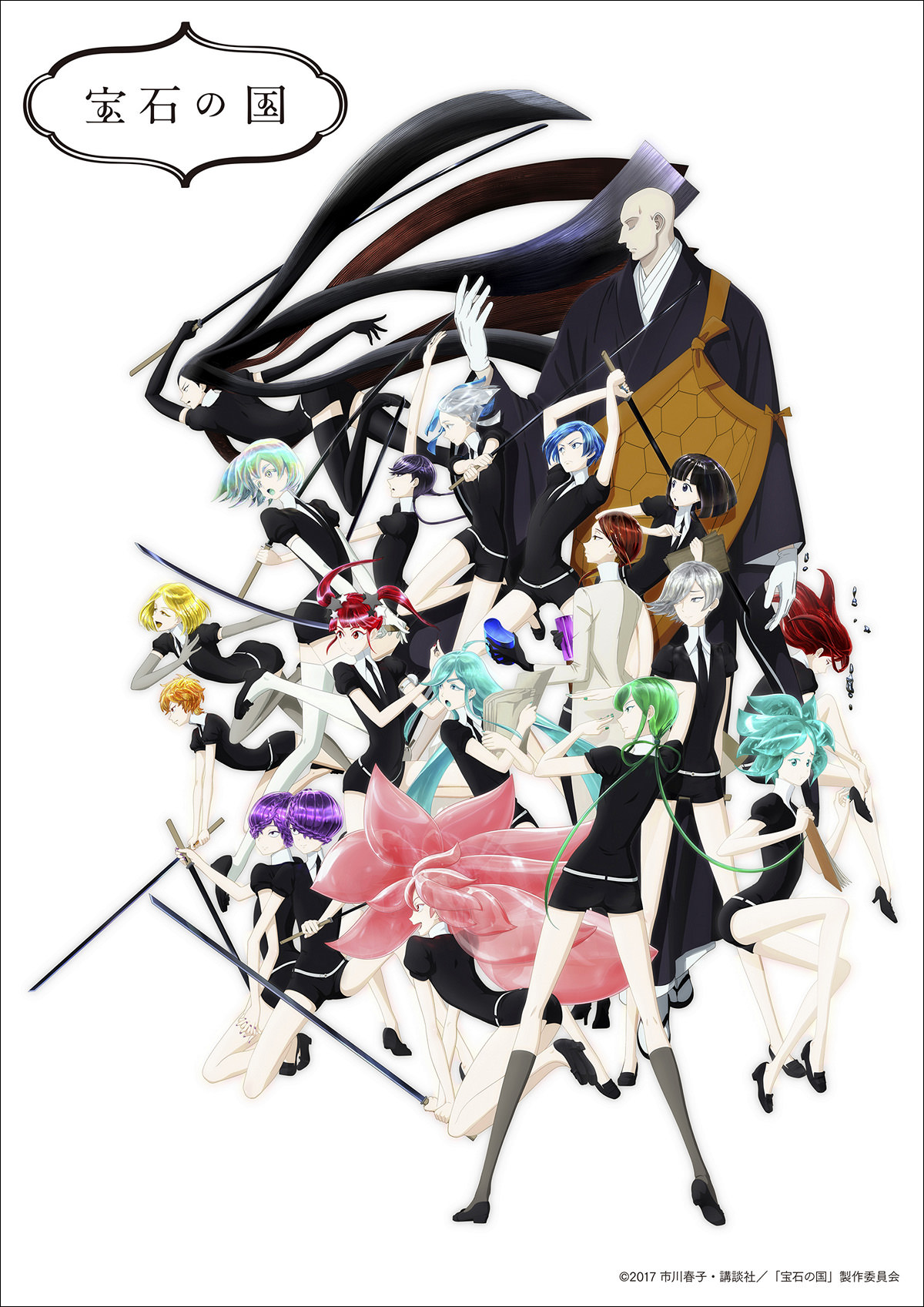 Houseki no Kuni (TV) was yet another anime that slipped through the cracks for me, but luckily, it was brought to my attention, and am I glad it was, because it was a real gem. *ba dum tss* 😀

Sorry for that bad pun, but B-M was right! It turns out that this is one of my favorite anime of 2017~

Synopsis: In the distant future, a new immortal and genderless life form called Gems populate the Earth. The 28 Gems must fight against the Lunarians, who attack them regularly to abduct them and to turn them into decorations. Each Gem is assigned a role, such as a fighter or a medic.

Being only 300 years old, Phosphophyllite is the youngest of the Gems and has no assignment yet. They want to help to fight the Moon Dwellers, but are too weak and brittle for battle. One day the master of Gems, Kongou (Adamantine), assigns them the task of creating a natural history encyclopedia.

Yeah, you read that synopsis right. Technically, these Gems are agender, but it’s not much of a stretch at all to consider them female. They look female, they sound female, and overall, they’re just very feminine, so just go along with me on this. For the sake of clarity, I’ll refer to these gems as she/her. 😛

Now that we’ve gotten that out of the way, let’s talk a bit about the story, which seems simple and straightforward, but that’s part of the beauty. The story barely scratches the surface of what’s going on in this universe, and while that sounds bad, I think the sense of mystery and intrigue add a lot to the story. Even when the final credits roll, there are still nearly as many questions as answers, and if there’s any justice in the world, we’ll get another season that’ll answer some of those lingering questions.

“There’s a decent amount of character development, and, of course, the yuri subtext mainly involving Phos x Cinnabar and Bort x Diamond adds another layer of enjoyment to an already enjoyable cast of characters.“

The pacing is a little slow, but that allows us a little more time to get better acquainted with the various Gems, and since there are so many of them, it’s actually pretty convenient. The brief insight into the finer details of the underlying story are fascinating, but little comes of it, as matters quickly return to the usual rinse-wash-repeat cycle of Lunarian attacks that the Gems work to thwart. It feels like the story is building up towards something greater, but that just doesn’t occur before the season comes to an end. Such a shame, yet it isn’t that bad, since there are still more than enough things going on to keep things interesting.

However, along the way, you could say the table gets set, with several characters slowly becoming critical to the narrative that’s being told. And it isn’t until the theoretical second season that the real major developments transpire, though, that wouldn’t be possible without the methodical story planning seen here. The conflict between the Gems and the Lunarians is very engrossing, even if it is drawn out a little too much for my liking. P.T. Barnum once said “Always leave them wanting more.” It seems like that’s the mantra that Houseki no Kuni (TV) lives by, and in this case, it’s very fitting. Where are you, season two? 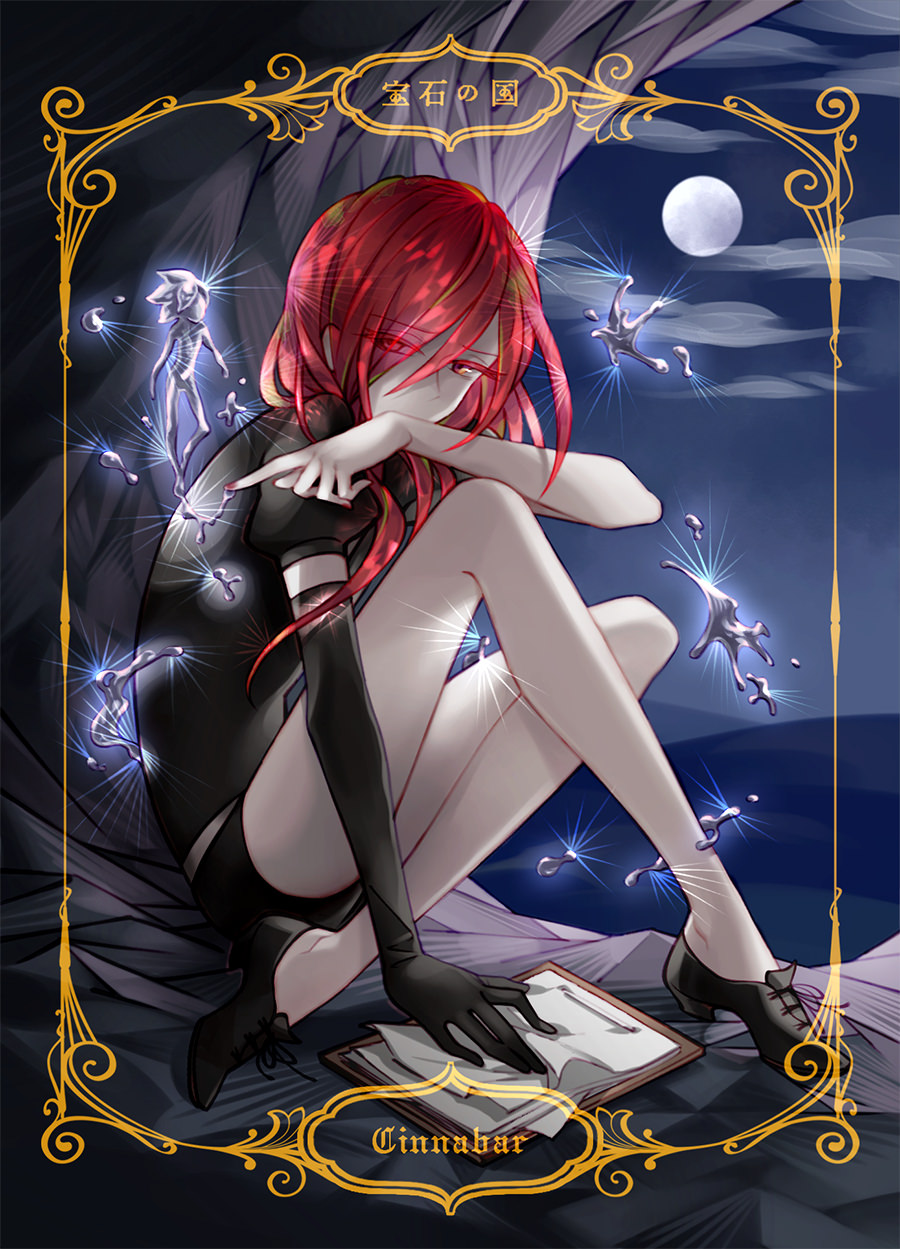 It’s kind of neat how the Gems really do resemble their real-world counterparts, right down to sharing the same hardness level on the Mohs scale of mineral hardness. You could also say that this anime is educational, since I hadn’t heard of several of these gems/minerals before watching this show. Antarcticite? Phosphophyllite? Padparadscha? Yeah, I’m smarter now, thanks to this show. 😛

Phosphophyllite, or Phos for short, is the main protagonist in this show, and as the youngest of all the Gems (at three hundred years of age), she also comes across as the least skilled or useful. Unsurprisingly, she has a lot of personality and is very outspoken, and for that reason, it’s extremely easy to like her. At a three-and-a-half on the Mohs scale, she’s rather fragile, but she strongly desires to be more useful to the group. I wouldn’t say that there’s a lot of comedy in this anime, but it’s certainly not completely devoid of humor, and Phos supplies a lot of it, which further helps to endear her to the audience. At one point, Phos undergoes a personality change that sees her become much more serious and resolute, so we get to see a completely different side of her. I’d be lying if I said I didn’t prefer her in the role of playful troublemaker, yet it’s cool to see that there’s more to her than that.

Phos was definitely a good character, but even though she’s absent for large portions of the show, I can’t help but love Cinnabar. Living a life of solitude thanks to the toxicity of the mercury content in her composition, she’s one of those unfortunate souls that you just feel for and want to see live a better life. Her distrust of others doesn’t stop Phos from attempting to befriend her and help her out, and that’s an overarching storyline that lasts the entire season and helps to bring about some yuri vibes. With a hardness of two on the Mohs scale, I believe she’s the most fragile mineral of all the twenty-eight Gems—or at least the most fragile of the ones who get somewhat significant screen time, not counting Antarcticite—and at least emotionally, that definitely comes across in the anime. 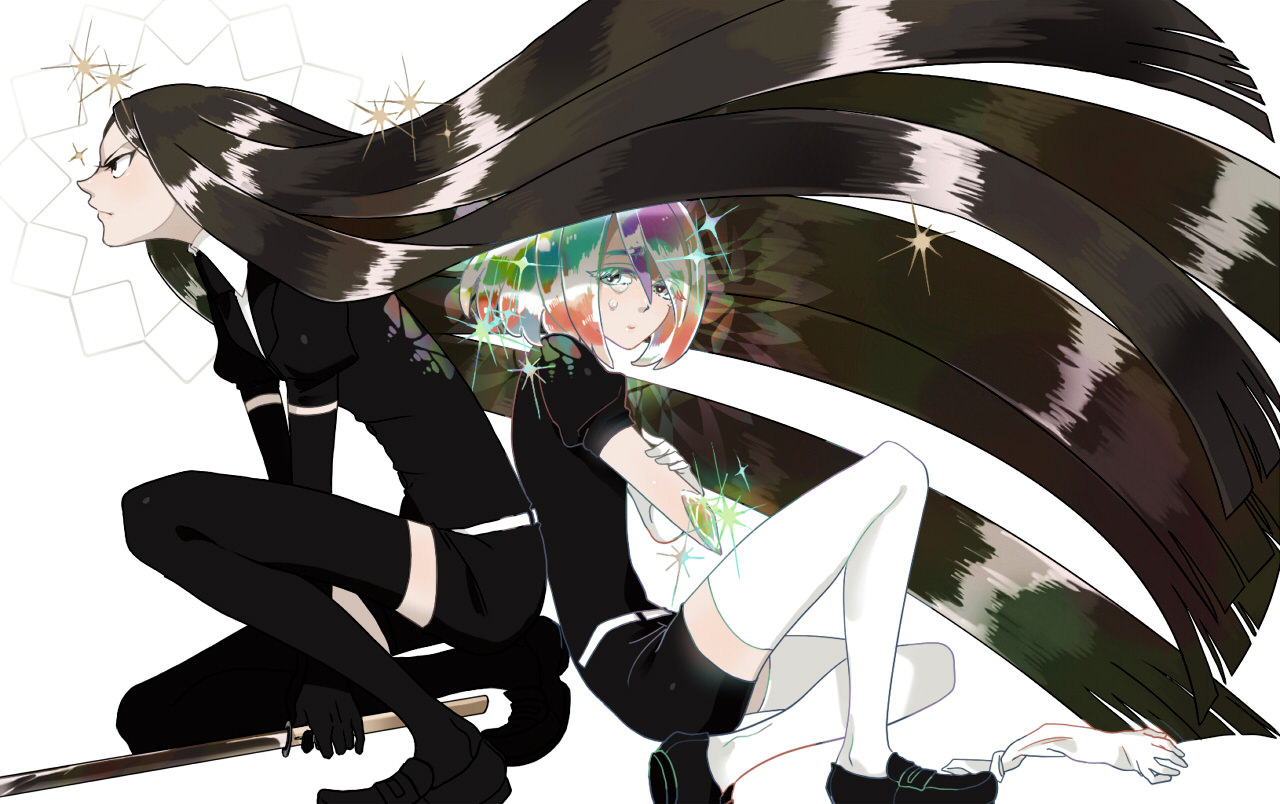 Aside from Phos and Cinnabar, Bort and Diamond should also raise some eyebrows among yuri fans. Besides both sporting a ten on the Mohs scale, they couldn’t be more different, as Bort seems like a badass that’s solely focused on fighting off the Lunarians, while Diamond seems to be the most sweet and friendly of all the Gems. Because she doesn’t want to see Dia hurt, Bort is tough on her and doesn’t hesitate to give her a piece of her mind. It’s almost like a knight protecting a princess, despite Dia’s ample ability. Since Bort is the strongest among all the Gems and oftentimes doesn’t let her fight, Dia sees herself as inferior and she wishes to be more like Bort. It doesn’t sound like the most healthy of relationships, but rest assured that it all stems from their affection for each other~

Many other characters make positive impressions, including Antarcticite, Alexandrite, Amethyst, Yellow Diamond, Zircon, Rutile, Red Beryl, Padparadscha, Morganite, Euclase, Jade, Ventricosus, Aculeatus, and I can’t forget about the big man in charge, Kongou-sensei. With so many characters, some get more screen time than others, though, they all bring a little something different to the table that makes them all seem pretty likable.

And let’s not forget about the Lunarians themselves. We’re told very little about them, and they only appear to conquer and return the fragments of defeated Gems back to the Moon, where they reside. So they’re silent and emotionless, yet they still somehow manage to be great villains that you desperately want to learn more about. How does that happen? I think their visual design probably plays a factor in their appeal, as they’re not the generic and uninspired antagonists that you’ll sometimes find in other series. Sometimes, less is more, and I feel like letting our imagination run wild with speculation was a good decision that made them even more compelling.

All in all, I was pretty surprised that I came to care a lot about some of the characters. There’s a decent amount of character development, and, of course, the yuri subtext mainly involving Phos x Cinnabar and Bort x Diamond adds another layer of enjoyment to an already enjoyable cast of characters. I would’ve liked to have seen a few characters a bit more, but I really can’t complain too much.

Upon hearing that this series was almost exclusively comprised of CG, I think I might have shuddered a little bit. Black Rock Shooter (TV) is an anime that immediately comes to mind that features a lot of CG, as do the offerings of anime studio Polygon Pictures, but I feel that stigma still exists towards CG in anime. A lot of the time, it seems awkward, out of place, and is generally used as a cost-cutting measure to mask some deficiencies, but Houseki no Kuni (TV) doesn’t fall into that trap at all.

Hats off to Orange, because this is a gorgeous anime that simply wouldn’t be the same had it been animated using traditional hand-drawn animation. I enjoy sakuga as much as the next person, yet I don’t think it has anything on many of the action scenes here, which wouldn’t really be out of place in a game like Platinum Games’ Bayonetta. Style is something that this anime isn’t lacking in the slightest, and I haven’t even mentioned the beautiful vistas, impressive character designs, exquisite direction and cinematography, or just how much more fluid and dynamic this looks than the CG we’re used to seeing in various other anime.

I’ll admit that I was wrong about the visual fidelity of this anime, and if it can’t turn CG non-believers into believers, then I’m not sure anything can. I’ve read that production on this show was laborious and time-consuming, but I have to say that it paid off handsomely, as it’s truly a wonder to behold~

With this anime, I’m sure the visuals will be the main focal point for a lot of people (me included), but don’t overlook the audio, which holds its own quite nicely. The music matches the mood of what’s going on on-screen superbly, and it doesn’t matter whether it’s an epic action scene, the arrival of those creepy Lunarians, or any of the more poignant moments, make no mistake that this is high quality stuff.

At a couple of points during the show, I’m pretty sure I even heard the mizmar or mijwiz, and it’s kind of impressive to see the influence of some cultures. So while the animation deserves a lot of praise, the high production values of Houseki no Kuni (TV) definitely extend to the music as well.

Considering all the good things I’ve said about it, it still baffles me that I somehow didn’t watch this show sooner. Houseki no Kuni (TV) really has a lot going for it: great action, an interesting (if underdeveloped) story, charismatic characters, a distinctive visual style that looks beautiful, some good music, and a bit of yuri subtext for good measure. The story is still far from complete, but I hear BD+DVD sales were promising, so maybe we’ll eventually get wind of a second season that’s on the horizon. If a second season does happen, it’ll have a lot to live up to, because this was an anime that was a very pleasant surprise and most definitely shined bright~ 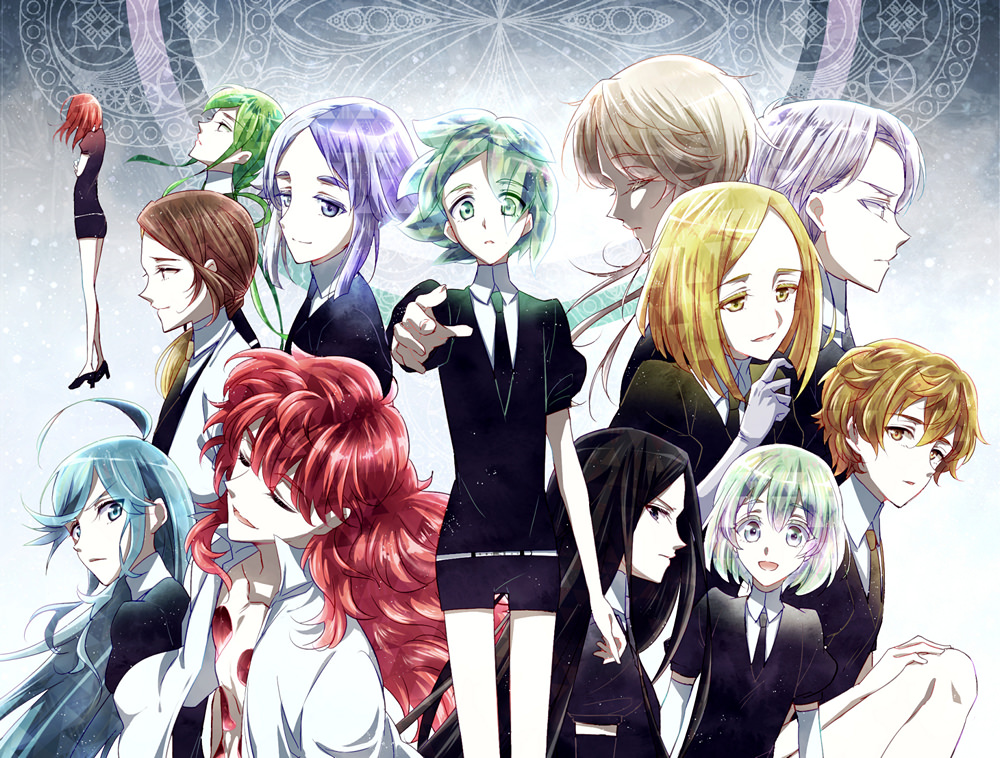