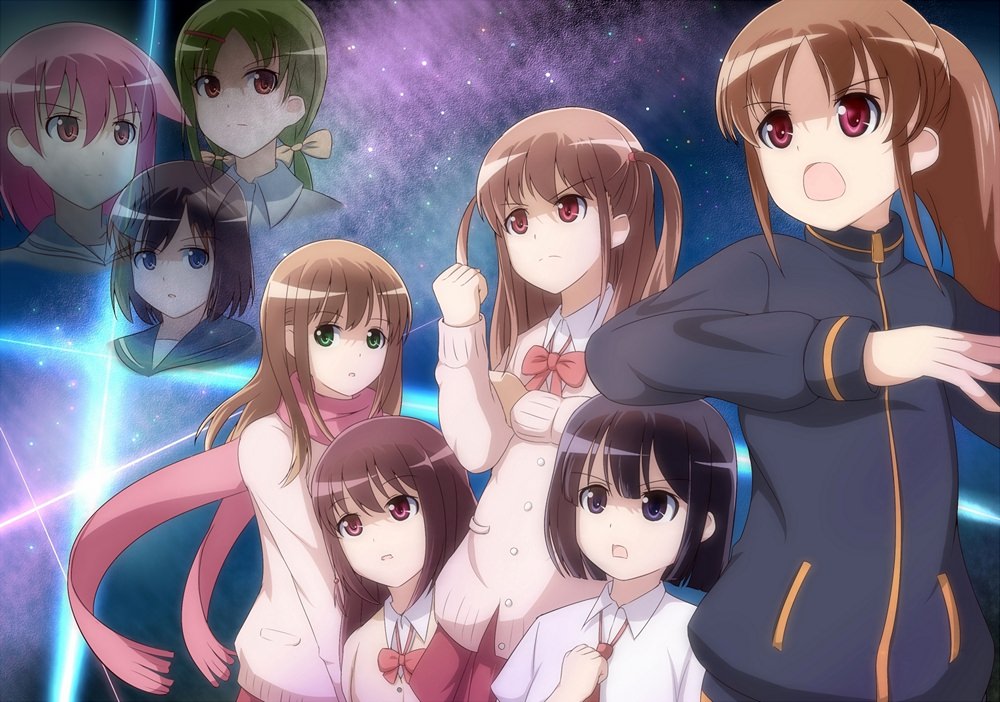 Anime spinoffs aren’t a new thing, but for every Toaru Kagaku no Railgun and Fate/kaleid liner Prisma☆Illya, you have a Mahou Shoujo Lyrical Nanoha ViVid. Something that just fails to recapture the magic of its predecessor. Is Saki Achiga-hen: Episode of Side-A more the former or the latter? Let’s sort it all out~

While Achiga-hen may be listed at only twelve episodes, you’re going to have to also watch the four-episode special, since the main season abruptly ends after only the first match at nationals. So this is really a sixteen-episode season, but just like the first season, pacing again proves to be a major issue.

Saki was guilty of prolonging the prefectural tournament to an excruciatingly long fourteen episodes, yet Achiga-hen goes the opposite direction and breezes through the same tournament in only a third of an episode. I get that the focus is all on the national tournament (which lasts thirteen episodes), but the lead-up to that feels rushed and underwhelming. Once at nationals, the pacing does settle down a bit, but in the semifinals, we have the lead-off match lasting four episodes. That in itself wasn’t so bad, but the problem was that that match turned into a one-sided beatdown, with Teru (Saki’s sister) destroying the competition and amassing a lead of nearly 116,000 points for her school.

“During her match in the semifinals, Toki helps Ryuuka by releasing the power she stored up in Ryuuka’s thighs, which allows Ryuuka to see ahead in the match.“

Including the original series, that was our first good look at Teru, but did we really need four entire episodes of her slaughtering everyone to know that she was a strong player? The only drama to come from that match is seeing if Toki was literally going to die on-stage. And while I’m complaining, let me also complain about the format of the tournament. Unlike any of our awesome single-elimination Yuri Tournaments (:D), this tournament isn’t single-elimination, so you can finish second in a match, then move on to the next round and still have a chance to be crowned champion. I just don’t like that format. 😛

Compared to the first season, I don’t think there was quite the same amount of comedy, especially after the national tournament starts. I prefer the slightly lighter atmosphere of Saki, which also didn’t have the amount of melodrama as Achiga-hen had. There’s still a lot of mahjong verbiage, and I still don’t understand any of the rules of the game, but that doesn’t make a huge difference. One positive thing about this season is how the competition between the semifinal schools feels just as tense as the original season, if not more so.

Overall, the pacing is again up and down, but perhaps the biggest problem with the story in Achiga-hen is that it isn’t complete. If you want to see how it all concludes, you’re going to have to watch the real second season of Saki, Zenkoku-hen. That’s a bummer, but it’s no different than the first season. After a slow start, I wasn’t expecting to enjoy the story of Achiga-hen as much as the original. However, when it’s all said and done, I feel like they both share many of the same strengths and weaknesses. The narratives are similar enough that if you enjoyed the first season, you’ll also like how the story unfolds in this one.

One of the original Saki‘s biggest strengths was its cast of characters, so Achiga-hen has a lot to live up to in this regard. Comparisons are never easy to deal with, however, Achiga-hen actually produces an ensemble cast that isn’t too shabby. 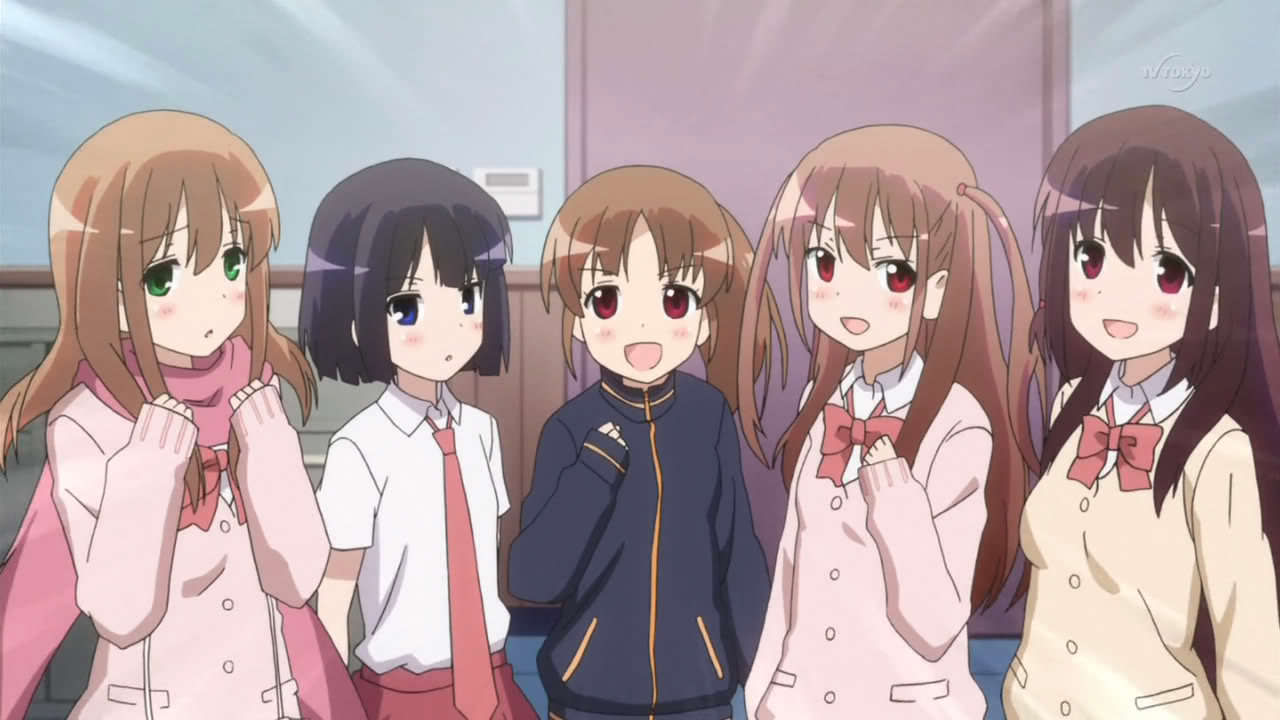 The girls representing Achiga Girls’ Academy include Kuro, Yuu, Ako, Arata, Shizuno, and their coach, Akado. Over time, my appreciation for these girls grew, but I’d be lying if I said that I enjoyed them as much as I enjoyed the girls from Kiyosumi. Other than Shizuno, I don’t think they had the strongest personalities, and even though I liked some of their quirks such as Yuu’s sensitivity to cold, by and large, I didn’t think they matched up to their Kiyosumi counterparts. The exception to this was Shizuno, who was my favorite character in the show. Does she ever wear pants? We may never know… 😛 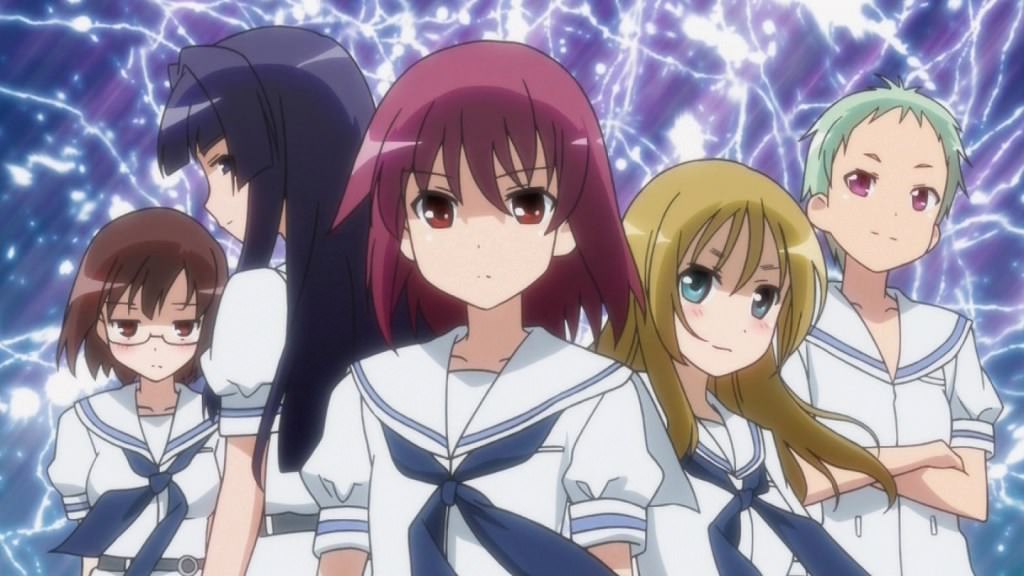 Like the first season, this spinoff also has a large cast, with many other schools vying for the number one spot. Shiraitodai High School is the back-to-back defending national champions, and it’s also home to Teru Miyanaga, the defending national champion from the individual tournament. Oh yeah, she’s also Saki’s older sister. Teru is obviously an incredibly strong player, but I was disappointed with the rest of her teammates. Besides blowing a Secretariat in the ’73 Belmont Stakes-size lead, they were mostly forgettable. Awai had/has potential, but I don’t think she ever realized it and became a truly standout character. 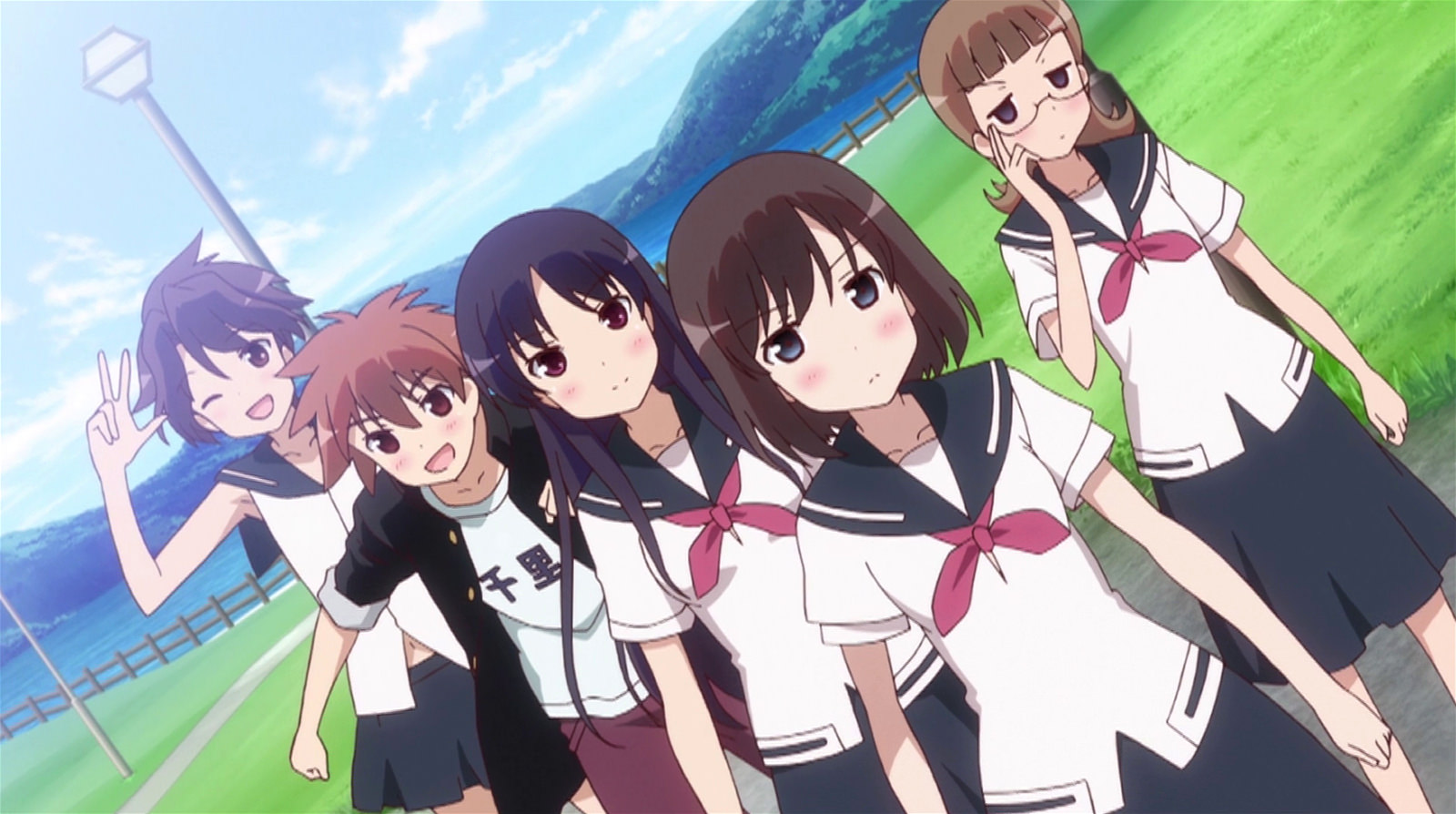 Out of all the rival schools to Achiga, Senriyama is the one that I felt had the most to offer from a personality (and mahjong) standpoint. It’s simple, it’s all about Toki and Ryuuka. This spinoff doesn’t have a pairing as visible as Saki x Nodoka, but these two are the closest thing to that. To yuri fans’ delight, they get a lot of screen time, and as previously mentioned, the four-episode lead-off match involves Toki, so we get to see a lot of backstory involving her and Ryuuka. They’re super sweet together, and it’s cute how Toki always rests her head on Ryuuka’s lap, but there’s actually a purpose to it (believe it or not). 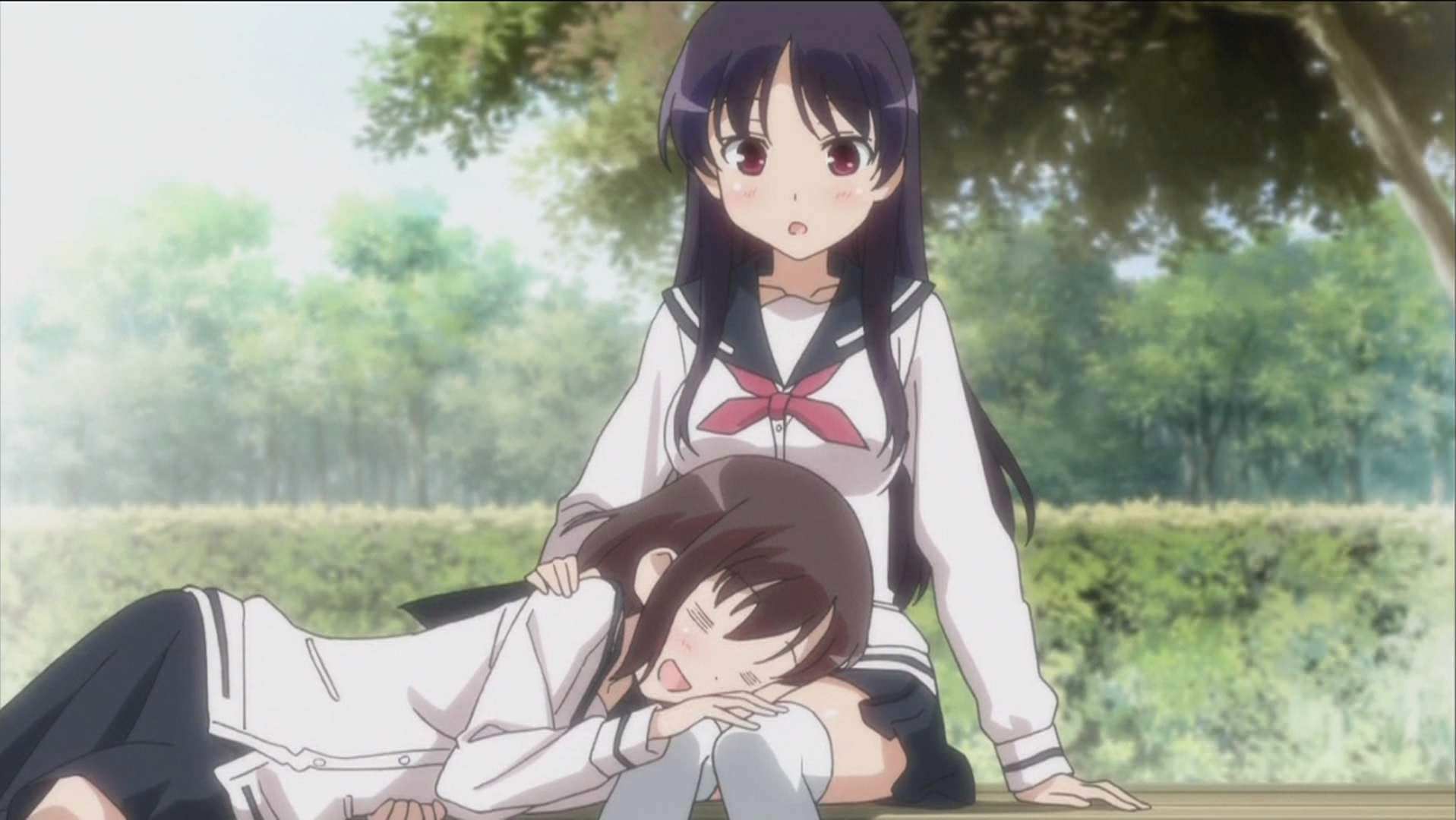 During her match in the semifinals, Toki helps Ryuuka by releasing the power she stored up in Ryuuka’s thighs, which allows Ryuuka to see ahead in the match. Seriously! That’s like the gayest superpower I’ve ever heard of! She’s not a main character, but Toki does more with less screen time than almost all of the actual main characters. Her and Ryuuka are this spinoff’s new and improved version of Momo x Yumi (who also make a very brief cameo), and they’re the number one reason why yuri fans would want to watch this~ 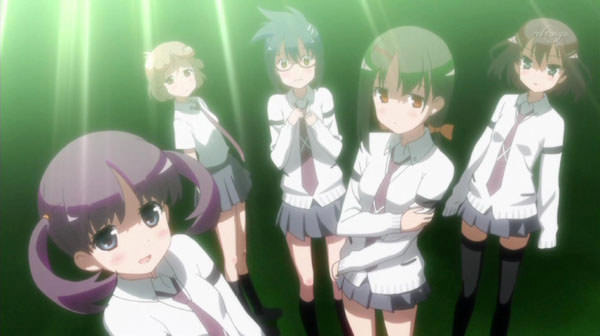 Compared to the other schools, Shindouji can’t quite match up in terms of mahjong play or personality. They’re essentially Achiga-hen‘s version of Tsuruga from the first season, but the best thing about this group is how they have their own yuri pairing, Mairu and Himeko. These girls don’t get much screen time at all—and they’re upstaged by Toki & Ryuuka—but they were pretty much the only bright spots on an otherwise dull team.

I’d say that Saki has the upper hand in terms of the cast of characters, however, Achiga-hen introduced a competent group of girls that prove to be fairly enjoyable. Cameos from Saki, Nodoka, and some of the other girls from the first season are small treats, but the new girls deserved the spotlight, and I look forward to seeing some of these fresh faces in Zenkoku-hen.

Moving on to the animation, the first thing I should point out is the change in production studios. Gonzo and Picture Magic were responsible for Saki, but now it’s Studio Gokumi taking the reins. Studio Gokumi usually loooves moe character designs, so things have been given a little bit of a cutesy makeover in this spinoff. Early on, I hated it, but the slightly different style eventually grew on me, and by the end of the season, it was pretty much a non-issue.

I thought there were definitely times when the animation was inconsistent, yet it’s not too big of a deal. The amount of fanservice is slightly down, but I actually miss the boob jokes being made at Nodoka’s expense. Similar to season one, all sorts of visual effects occur during the mahjong matches, and even more girls seem to have special “powers” that make things look all pretty-like. Long story short, it might take a little getting used to the new art style, but when you do, you’ll realize how it isn’t that much different from what’s come before.

While there’s been a major change along the visual front, the same can’t be said of the audio, which is very similar to season one. For me, the most notable thing about the audio is the introduction of an all-new group of voice actresses, including Aoi Yuuki, Nao Touyama, and Kana Hanazawa. As I’ve already mentioned, I felt like there was something lacking with the main cast, but it’s certainly not because of the voice acting.

Personally, I wouldn’t rank this as highly as the first season, but isn’t that almost always the case for spinoffs? To answer my question from the intro, Saki Achiga-hen: Episode of Side-A absolutely captures the essence of the original Saki. Even though I think comes up just short in some respects, it’s a solid addition to the franchise and will most likely please fans of the original.