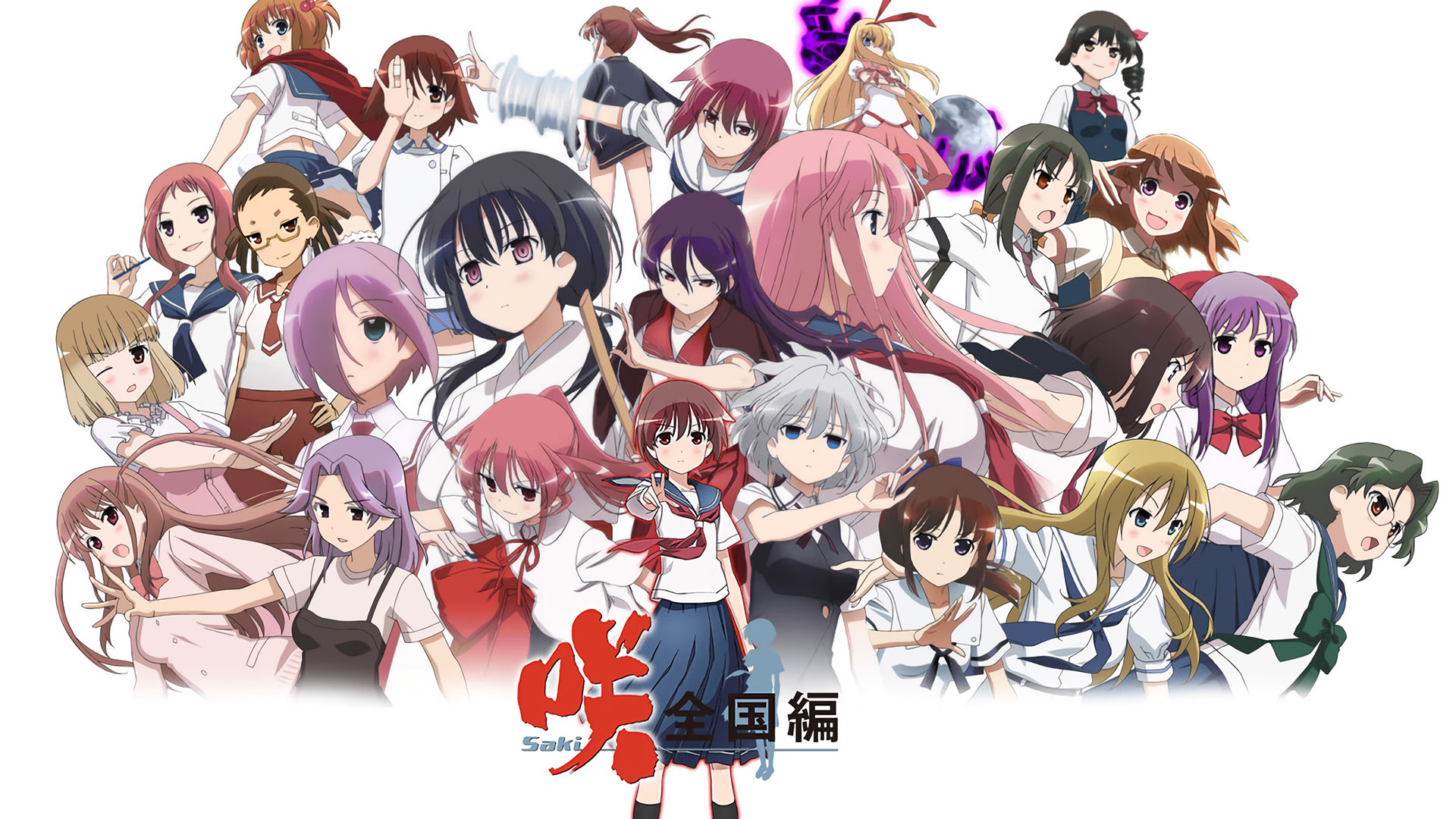 With the first season and spin-off under our belts, it’s time to review the second season and finally get this tournament over with. At least, that was my plan, but Saki Zenkoku-hen has its own plans…

Let me jump right to the chase and mention that if you were waiting for the inevitable showdown between Saki and Teru, you’re going to be disappointed. That’s because Saki Zenkoku-hen doesn’t actually conclude with one school being crowned champions. We don’t even reach the semifinals, much less determine a winner. That’s just really, really disappointing. It seems that the glacial pace of the manga (which just recently released its 188th chapter) is to blame for this atrocious pacing, but I can understand if people who don’t keep up with the manga feel like they’ve been misled into thinking that this season brings about a definitive conclusion.

The first three episodes reestablish the connection between the main schools of the first season, Kiyosumi, Ryuumonbuchi, Kazekoshi, and Tsuruga, but for all intents and purposes they’re filler. That’s not necessarily bad, as it was nice to see these other girls again, however, in hindsight, maybe trimming that fluff down could’ve led to us actually getting to see the semis. The rest of the season is about the second round of the tournament, and each of the schools get ample time to try and flesh out their players. This includes a lot of flashbacks that do a good job of helping you get to know the characters a bit better, and a lot of these flashbacks center around the new characters.

One thing I enjoyed was seeing events that happened in Achiga-hen from the perspective of Kiyosumi, such as when Saki crosses paths with the Achiga girls at the tournament. In Achiga-hen this scene made Saki out to this sort of mahjong monster, but in this, its Shizuno who looks to be the monster. Since the bulk of both Zenkoku-hen and Achiga-hen take place at roughly the same time, I would have liked to have seen even more moments like this.

“From a yuri standpoint, Zenkoku-hen has to be viewed as a big step back for the series, and as one of the more enjoyable aspects of the first season and the spin-off, let’s hope that this isn’t how the rest of the story plays out.“

Going forward, it seems as if there’s more to the Saki/Teru situation than we know, and that’s intriguing. From a purely mahjong standpoint, I don’t think of Achiga as highly as I do Kiyosumi, but it would be nice to see them battle it out anyway. It’s already been four years since this second season ended, so who knows if we’ll even get to see how the tournament ends. By all accounts, this third season still managed to sell well, so it’s all about getting enough content to fill an entire season, but honestly, if getting another season only results in completing the semifinals, I’d much rather they wait until there’s enough content to actually see this tournament through till the end. That’s really the best way to fix Saki‘s main problem, but we’ll just have to wait and see if that’s what ends up happening.

Since this series features so many teams and dozens of players, it probably shouldn’t be too surprising that a lot of them end up being completely forgettable. The four main schools in the first season (Kiyosumi, Ryuumonbuchi, Kazekoshi, and Tsuruga) were chock full of interesting characters, and even the teams featured in Achiga-hen (Achiga, Shiraitodai, Senriyama, and Shindouji) had characters that left more of an impression on me than this season’s offerings.

Of course, the Kiyosumi girls are back, but they end up having to battle these other schools in more ways than one. Their competitors actually get a lot of the spotlight, which kinda leaves the girls we’ve followed from the outset out in the cold. Individually, they’re still as entertaining as ever, and they do still have their moments when the focus is solely on them, it’s just not to the level that I expected.

Because we have three new schools and fifteen new players to get acquainted with, we see things from their perspective quite a bit. It has to be challenging to try and build up these new schools on the fly, so I can understand why the decision was made to feature them so heavily, though, for me, I just didn’t become invested at all. To me, neither Eisui, Himematsu, or Miyamori had that same intimidating aura that Ryuumonbuchi or Kazekoshi had, and even though they’re supposed to be tougher opponents, I didn’t quite believe that. 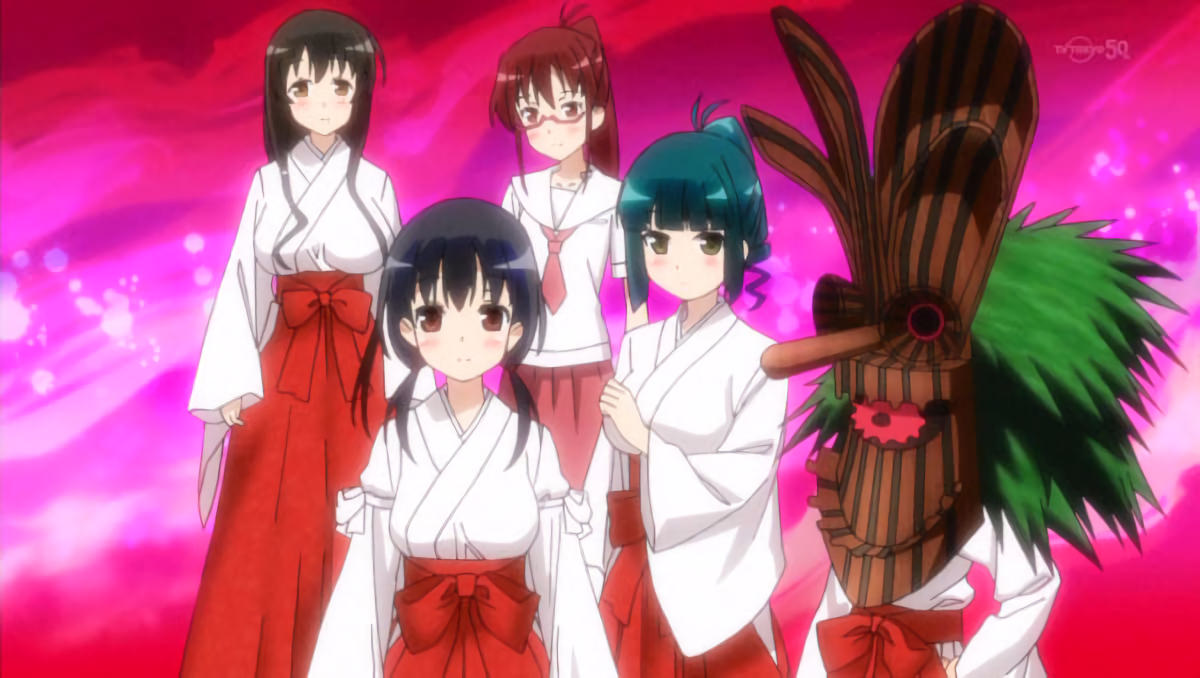 Out of the three new schools, I think Eisui seemed to be the most intriguing, and that’s mostly thanks to the whole miko vibe. That situation does distinguish them from their rivals, yet the players still could have been more interesting, because if you were to take away this unique selling point of theirs, they’re just as ordinary as the other schools. In other words, their mystical presence couldn’t quite cover up their lack of substance. 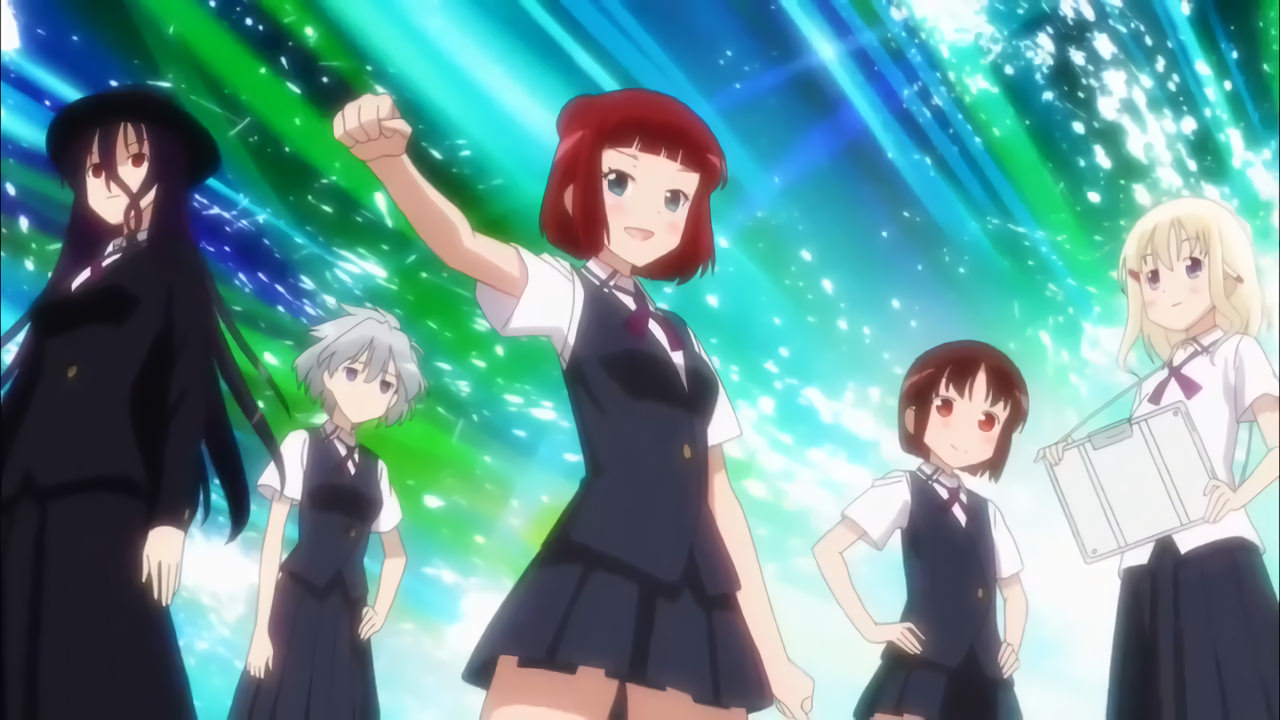 I always ended up confusing Miyamori with Himematsu, and then I remembered that Miyamori has my favorite new character this season, Toyone. That tall drink of water looks intimidating, but it seemed like she’s really a softie. That one girl who kinda looks like Sakuya from Touhou (minus the braids) was also not too bad, and I liked how another of their players, Aislinn (a foreigner), has to draw on a message board to properly communicate with her teammates. There was also one tiny member who always sat on the lap of the Sakuya look-a-like. I don’t remember her name (either of them actually :P), but that was cute. 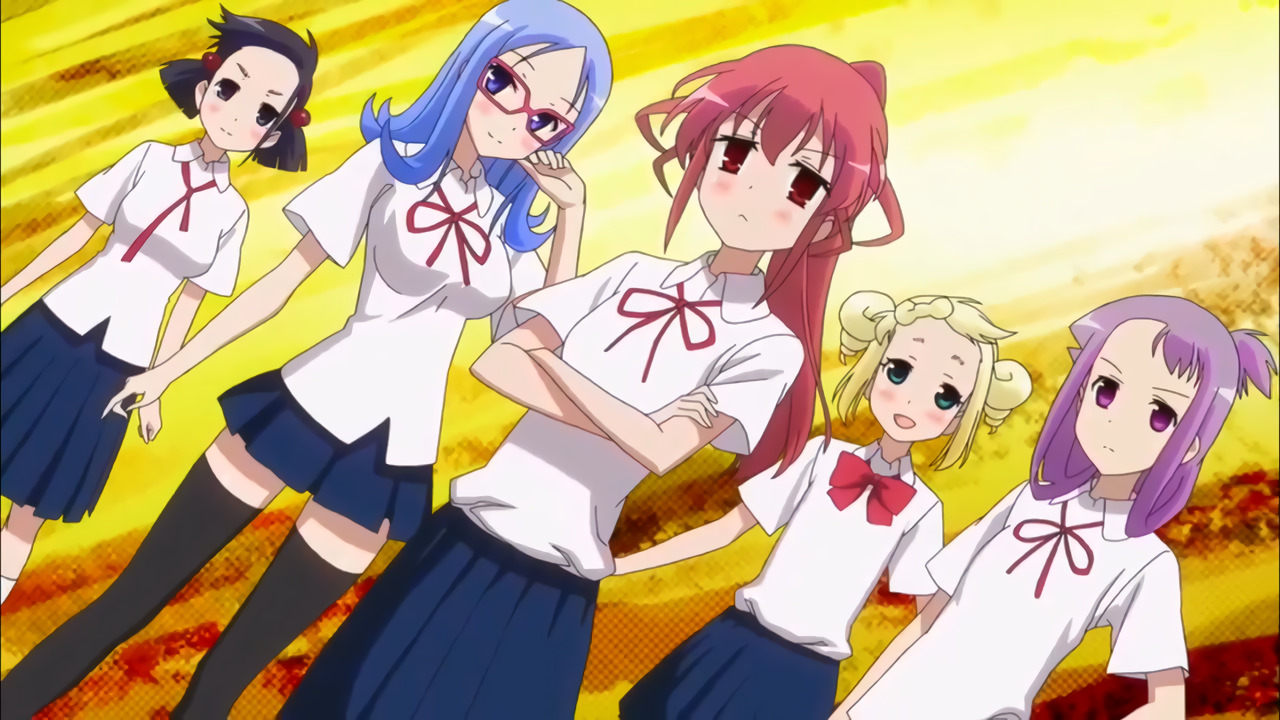 As for Himematsu, I just didn’t find any of these girls remotely interesting. To me, they’re kinda like this season’s version of Tsuruga or Shindouji, even though they’re much better at mahjong. But at least Tsuruga had some compelling characters such as Satomi—who I didn’t find all that interesting in the first season, yet she’s really managed to grow on me, wahaha—not to mention the bespectacled beauty Kaori and Momo x Yumi. Himematsu has… well, not too much. If/when we get another season, perhaps my tune will change about them, but until then, I struggle to find any reason to care about them.

This even extends to the tournament announcers. After Achiga-hen featured two entertaining duos, this season’s pale in comparison. Even if the previous pairs were a little out there, they helped make the matches seem more exciting. The ones from this season are just bland, and they don’t add anything to the matches, so I wonder why they’re even there at all.

As for the yuri subtext, well, it’s definitely not as high as it was in previous seasons. Since the focus is largely on other, less interesting schools, Saki x Nodoka is practically nonexistant. Going from how close they were in the first season to how they barely even interacted after the initial three episode filler episodes of this second season, it’s just really unfortunate. So the series’ main pairing is lackluster this season, and pretty much all of the other pairings such Touka x Nodoka, Hisa x Mihoko, Kana x Mihoko, and Momo x Yumi don’t fare any better, since those old supporting characters have to resort to cameos that don’t last very long. I’m not even sure if Toki x Ryuuka made a cameo, but one thing’s for sure. From a yuri standpoint, Zenkoku-hen has to be viewed as a big step back for the series, and as one of the more enjoyable aspects of the first season and the spin-off, let’s hope that this isn’t how the rest of the story plays out.

Overall, Saki and the Kiyosumi crew remain the likable bunch that we remember, it’s just that it’s hard to say that these three other schools are likable as well. There may be a character here or there that prove to be exceptions, but I really miss the days of Ryuumonbuchi, Kazekoshi, and Tsuruga…

In terms of production values, not much has changed from Achiga-hen. Visually, I think there may be the slightest of improvements from the spin-off, but nothing that’s out of the ordinary, given it’s later premiere. You can probably say that the audio hasn’t changed too much either, but one thing that caught my attention on a few instances was how the music almost sounded like world music. This didn’t happen much, but it definitely had a sound that was more indigenous than what we’re used to from this series. Big shout-out goes to those miko girls for that. This season had four EDs in total (including the first episode’s), with each of the three rival schools getting their chance to hoist the championship trophy at the end. Ironically enough, no one actually ended up hoisting it, since we didn’t get close to completing the tournament, but I digress. All in all, this is mostly more of the same from this season, and that’s fine.

Simply put, I was disappointed with this season. After teasing the reunion of Saki and Teru for pretty much all of the first season, I thought it would finally come to pass this season, and I couldn’t have been more wrong. What I was hoping to see was Kiyosumi make their way to the finals and face-off with Achiga and Shiraitodai, but what I got was these other three schools failing to make much of an impression before two of them are ousted en route to the semifinals.

The pacing is still a major problem, far too many of the new characters were all too forgettable, and this is despite them being given every opportunity to make a favorable impression. The semifinals will introduce two brand-new opponents, so I’m expecting some of the same problems that plagued Zenkoku-hen to persist whenever the next season happens. But despite all of this negativity from me, the actual mahjong matches are as entertaining as they’ve ever been. It’s also great to see Kiyosumi kicking ass, and I love how their former rivals are all now cheering them on and helping them out, so there are still many positives to be found here. To me, Saki Zenkoku-hen doesn’t quite live up to original, but I don’t think fans of the series will mind too much. 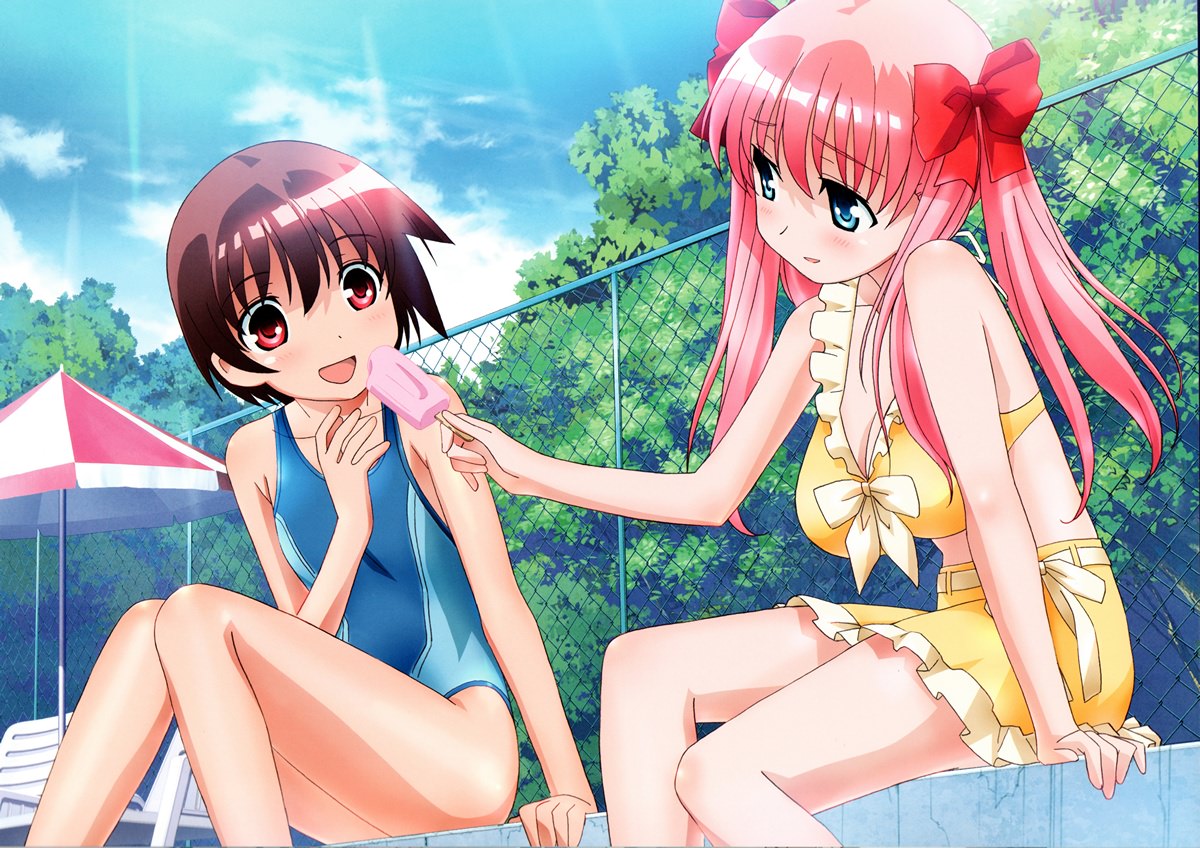