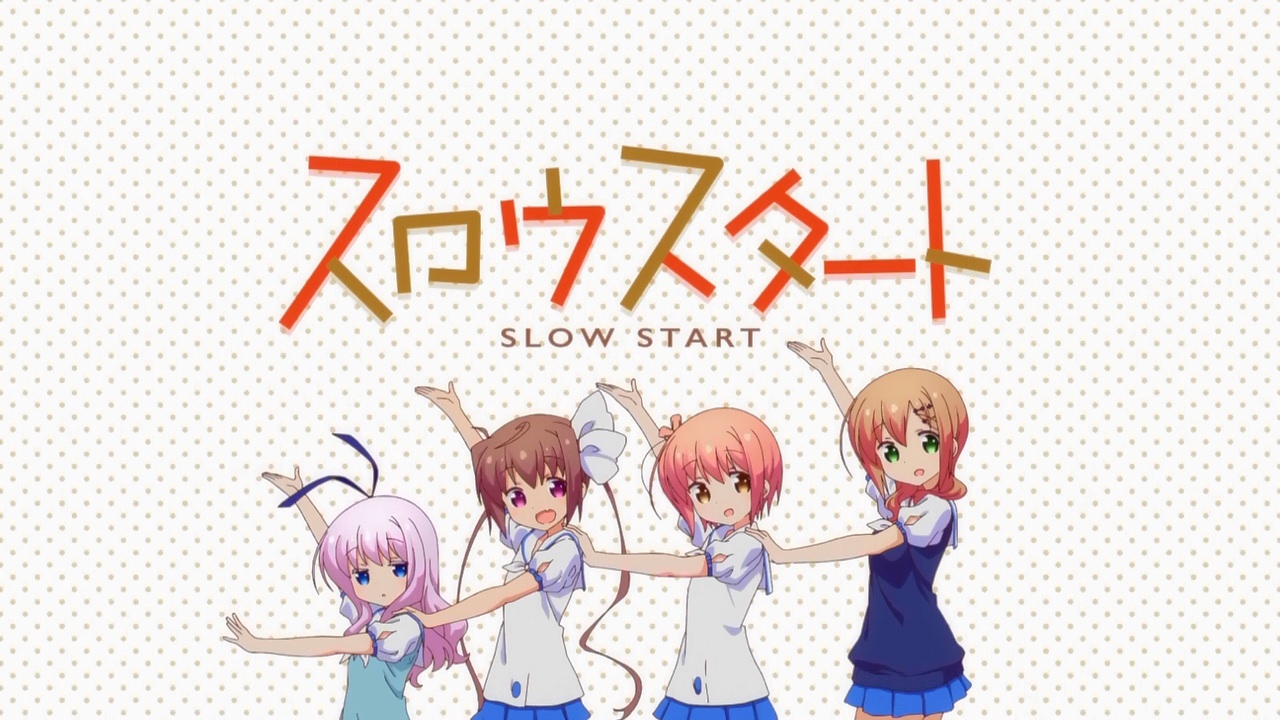 2018 has been the yuri gift that keeps on giving, and in this week’s review, we’re taking a closer look at one of the shows that seemed to have gotten lost in the Citrus hype, Slow Start. If you like cute girls doing cute, gay things, you might like this anime~

Synopsis: Hana Ichinose is a normal 16-year-old high school student. However, there is something different about her: She enrolled in high school one year late! Her classmates are unaware of this, and Hana will have to work hard to catch up with everyone else.

I’ve seen some of the best slice of life anime of all-time. I’ve seen Slow Start, too. 😛

Okay, that makes it seem like I thought this show was terrible, and it wasn’t. But at the same time, it doesn’t do too much to differentiate itself from the glut of cute girls doing cute things anime. For me, going directly from something as refreshing as A Place Further Than The Universe to this, it’s almost like going from having a nice gourmet dinner to having meatloaf. Maybe that sounds harsh, but I don’t think people can deny that this is a run-of-the-mill slice of life, with plenty of familiar situations and the standard high school backdrop.

When I first started watching this anime a few months ago, I dropped it after the first episode. At that time, it all seemed kind of generic to me, and taking the time to watch yet another bland slice of life wasn’t something that I was looking forward to. The promise of yuri is what brought me back, and slowly but surely, the show grew on me a little bit. Just like the title, the show got off to a slow start, and it wasn’t until the fourth episode that I started to legitimately enjoy it. Uncoincidentally, that was when Hannen was introduced, and the first hints of individuality started to present themselves.

“It’s fair to say that I think Slow Start falls somewhere between Kiniro Mosaic and Yuru Yuri in terms of yuri content, with it probably being a little bit closer to the former than the latter.“

The title is referring to Hana enrolling in high school a year late, which provides her with all sorts of anxiety, but in the end, Hana doesn’t end up telling her friends about her gap year (besides Hannen). Still, this is an anime that boils down to strong friendships, and you have slice of life staples such as going to a festival, a beach episode (which doesn’t actually take place on a beach) that’s fanservice-heavy, and a sleepover that show off that friendship.

Pretty standard stuff, if you ask me, but I think the comedy is good, so what more can you really ask for? 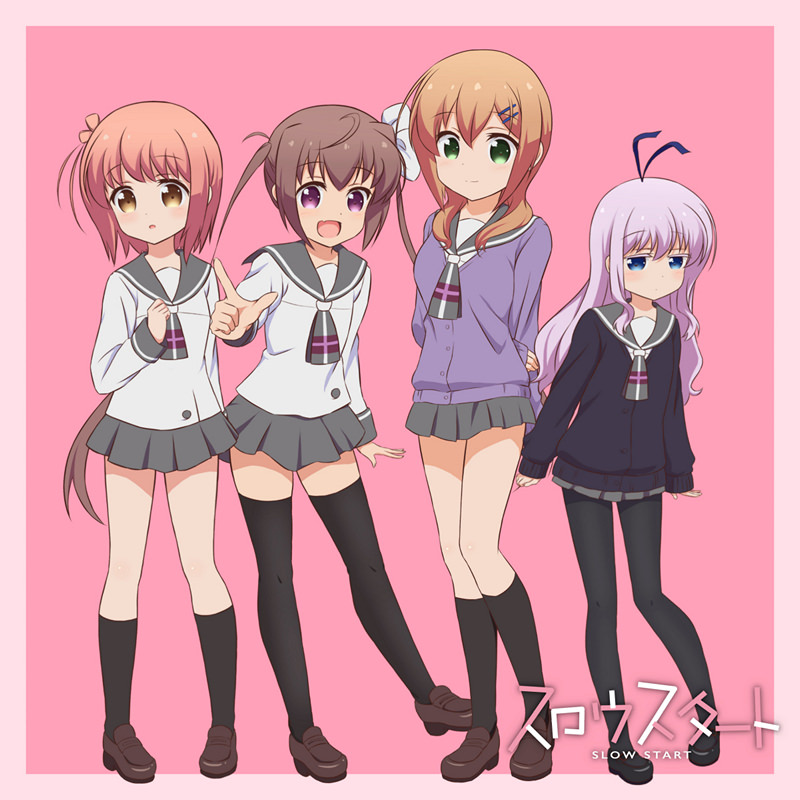 (from left to right) Hana, Tama, Eiko, and Kamuri

While a compelling story would be nice, in my eyes, it’s the characters that can really make or break a slice of life anime. This (along with the yuri, of course) is where I believe Slow Start puts its best foot forward and establishes itself as a solid slice of life.

More or less, Hana is your typical slice of life protagonist. Very sweet, gullible, and innocent, she’s just that tried-and-true everygirl that every one of these anime has. Sometimes stereotypical characters like these can seem sort of bland, but I wouldn’t really say that about Hana. That said, she wasn’t my favorite or anything, yet there are a lot worse main characters out there. In most shows like this, I think I tend to gravitate more towards the genki girl, and for this show, that’s Tama. She’s no Karen, Kyouko, or Konata, but she’s always entertaining.

Much like Chino from GochiUsa and Kanna from Kobayashi-san—with whom she shares a voice actress—Kamu is this show’s adorable small girl, and just like those other girls, she’s easy to like. Her partner in crime, Eiko, is the yuri flirt that’s always by Kamu’s side, and even though I think I would have preferred for her to only show interest in Kamu, I can’t stay mad at her. After all, she does far too much for us yuri fans for that, so keep on doing your thing, Eiko.

While I thought that the main characters were fine, I almost liked the supporting characters just as much as the main cast. When I say that, I really mean Hannen and Enami. Shion was entertaining as well, but I think that most of her entertainment value came from the fact that she has giant boobs, as opposed to coming from her personality (though, she wasn’t a bad character at all). I loved the awkwardness of Hannen, and her shut-in ways led to some of the best comedy the show had to offer, in my opinion. As for Enami, with all the cute characters, the show needed some spice, and that she provides. Blunt and straightforward, she’s a no nonsense type of person, and I really like that about her~

It’s fair to say that I think Slow Start falls somewhere between Kiniro Mosaic and Yuru Yuri in terms of yuri content, with it probably being a little bit closer to the former than the latter. Like KinMoza, you have a pairing that might as well be canon (Eiko x Kamu), and Eiko is enough of a charmer that other girls besides Kamu fall into her web. Regarding Eiko x Kamu, it’s absolutely adorable how Kamu’s so shy around everyone other then Eiko, so she’s especially clingy towards Eiko, and they make a really cute pairing.

Now, I’m a firm member of the Eiko x Kamu fanclub, but the relationship between Eiko and Enami-sensei was very surprising and very welcome. The patented “indirect kiss” involving the candy that Eiko gave to Enami was nice, as was the ol’ “you have some food on your face, let me wipe it off and eat it for you” move that she pulled, but episode seven was easily the highlight for those two. In it, Eiko runs into a drunk Enami and escorts her back to her apartment, where she stays the night and gets tied up by Enami. It’s not as risqué as it sounds, yet there’s still some flirting that goes on between the two, and Eiko never ceases to be a tease.

And remember Shirase’s two moms from A Place Further Than The Universe? Slow Start sees that and raises, giving us Tama’s two grandmas. When the adults AND senior citizens start to get it on the fun, you know we’re living in some good yuri times. Of course, Tama encourages all of the yuri moments in the show, so how can you not love her?! She’s a little like a poor person’s version of TOSHINO KYOUKO from Yuru Yuri, even though she doesn’t get that involved herself (other than playing bishoujo games and getting the other girls to play one as well, because “it’s a game where you try and get girls into bed”). Indeed, she has a bright future… 😛

Overall, I feel like this anime redeemed itself with how entertaining the characters were. Personally, I wouldn’t put the cast up there with the girls from Yuru Yuri, KinMoza, GochiUsa, or Kobayashi-san, but those are some heavy hitters, and there’s no shame in being part of the next tier. And to make matters even better, there’s probably more than enough subtext to satiate fans who prefer their cute girls on the gay side.

Moving on to the production values, I think Slow Start kind of underwhelms both in terms of animation and sound. Admittedly, not much is really expected of these types of anime, but when recent shows like A Place Further Than The Universe and Comic Girls make concerted efforts to look pretty good, it’s a bit disappointing to go back to something so mediocre. Cuteness can only get you so far, so while this anime does feature a lot of moe characters, it nevertheless falls into the 4-koma curse of having uninspiring visuals. To me, the audio for this one is completely forgettable, and if you can imagine in your head what the background music in slice of life anime typically sounds like, it’s exactly like that.

All in all, Slow Start is a cute girls doing cute things anime with quite a lot of yuri subtext to hang its hat on, and even though the show isn’t all that original, it’s still fairly entertaining. If you like yuri-themed slice of life anime, there’s a pretty good chance that you’ll like this as well~ 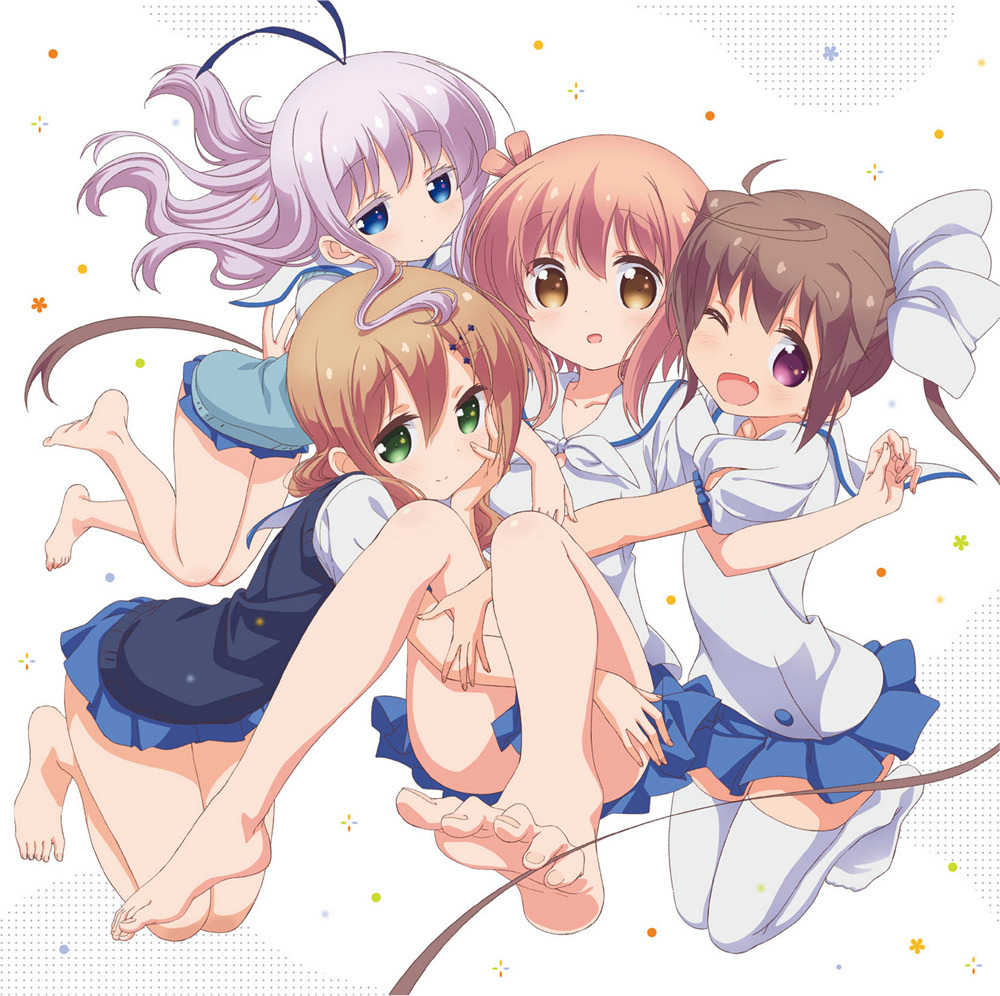