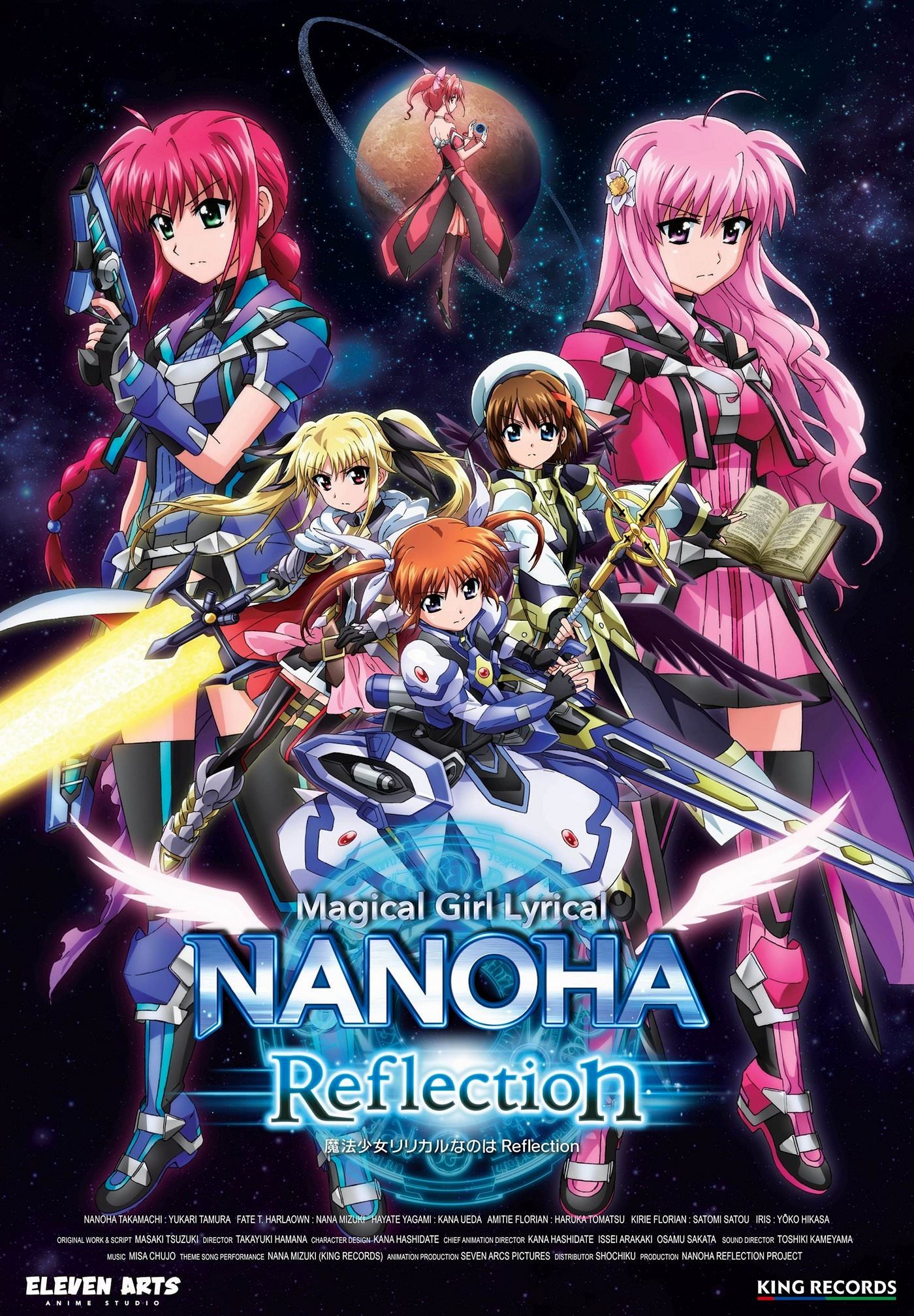 Synopsis: Amitie and Kyrie are sisters living on the dying planet Eltria; a harsh world that their scientist parents have been working for years trying to save. But the poisonous environment is slowly killing their father, and his dream of restoring the planet is dying with him. Kyrie runs away and travels to Earth to steal the power she believes will save her family and her home: Hayate’s Book of Darkness! Amitie follows in hot pursuit, knowing her desperate sister is willing to go to dangerous lengths to accomplish her goal. Can Nanoha, Fate, and Hayate defend Earth from this new threat?

First off, this movie is a direct sequel to Magical Girl Lyrical Nanoha: The Movie 2nd A’s, so unlike the previous two Nanoha movies, this isn’t a compilation film. It’s the first of a two-part story set between the events of A’s and StrikerS, and Reflection takes us back to a simpler time. A time when Nanoha and Fate were still high school students, yet various nefarious individuals were still up to no good.

At this point, you kind of know what to expect from the plot of a Nanoha anime, and more or less, this movie falls in line with those expectations. This time, one of those “nefarious” individuals is Kyrie—one of the new additions to the cast—who initially has good intentions, but as so typically happens in fiction, things escalate, and she quickly gets in over her head.

As integral to the story as Nanoha and Fate have been up until this point, Kyrie, her AI sidekick Iris, and her older sister Amita play equally important (if not more important) roles in this film, so much so that I don’t think it’s much of a stretch to call Kyrie the main character. At the same time, she’s also the main antagonist, since she quickly finds herself at odds with Nanoha, Fate, and the rest of the TSAB.

I’m sure there will be some people who are disappointed that the more familar characters (i.e. Nanoha, Fate, and Hayate) once again have to step aside and share the spotlight with others, but truth be told, this isn’t that much different than when the Wolkenritter were introduced in A’s. Don’t fret, as this is no ViVid, and all of the characters you know and love still play major roles in the story~

“Okay, I’m just going to go ahead and say it, NanoFate fans, you’re kind of hung out to dry.“

This wouldn’t be Nanoha without action, and oh is there a lot of it, since there’s simply no time to have drawn out story arches. Because of this, Kyrie, Amita, and Iris seem like fairly shallow characters, and any character development that occurs usually happens during or after battle. Like the olden days, these girls aim to settle their disagreements with their weapons and magic, and since most action anime aren’t known for having particularly well-developed stories anyway, I’m perfectly fine with the focus being on the action.

After a plot twist that you should be able to see coming from a mile away, the movie ends on a cliffhanger, so we gotta wait for the second part of the story, Magical Girl Lyrical Nanoha: Detonation, to see what happens after this. That sucks, but I think most people expected the story to play out this way, so it shouldn’t be too much of a surprise.

All in all, the story in Reflection isn’t its strong suit, but you can say that about the entire series. More than anything, it’s simply a vehicle for some magical girl on magical girl violence, and I think that’s enough for most people, including me.

To make up for the so-so story, Nanoha has always had some quality characters, and that doesn’t change all of a sudden with this movie.

Kyrie and Amita are no Nanoha and Fate, but I think they’re pretty comparable to Teana and Subaru from StrikerS, and I definitely liked them much more than Caro and Erio, also from StrikerS. That said, one of things that really grinds my gears are villains who aren’t inherently evil, and Kyrie falls into that category. She’s obviously misguided and lets her emotions drive her to do some questionable things, but she isn’t doing all of this out of a lust for power or anything, she’s doing it to save her planet and her father. How am I supposed to come to root against someone who has such a strong sense of family and a love of nature?

Luckily, Kyrie also happens to be stubborn and selfish, so she kind of shoots herself in the foot in that regard. On the other side of the spectrum, we have Amita, who’s almost like the Thor to Kyrie’s Loki, if you will. As the older sister, she says and does all the right things and follows Kyrie to Earth in order to stop her. If Kyrie can be classified as a villain, then Amita is a hero, and it’s very easy to root for her, especially when her and her sister are engaged in fisticuffs. Their sibling rivalry takes center stage, but they’re not alone. Iris accompanies Kyrie on her mission, acts as her guide, and was responsible for Kyrie leaving her homeworld. Without her, Kyrie probably wouldn’t have gotten very far on her quest, so they’re basically partners in crime. And no, there aren’t really any hints of them being like that. Sorry to burst your bubble. 😛

Of course, Nanoha, Fate, and Hayate all still play major roles in the story, and they act as the main obstacle standing in the way of Kyrie and her goals. Okay, I’m just going to go ahead and say it, NanoFate fans, you’re kind of hung out to dry. Compared to what the fandom has created, the anime will always pale in comparison. It’s a sad truth, but with Kyrie and Amita playing such pivotal roles, there simply isn’t much room for meaningful interactions between the two. It’s not like the first season and A’s were incredibly rich in NanoFate moments—StrikerS is a different story, since it features a more grown-up and maternal Nanoha and Fate—but they still had more to offer NanoFate fans than this movie does. 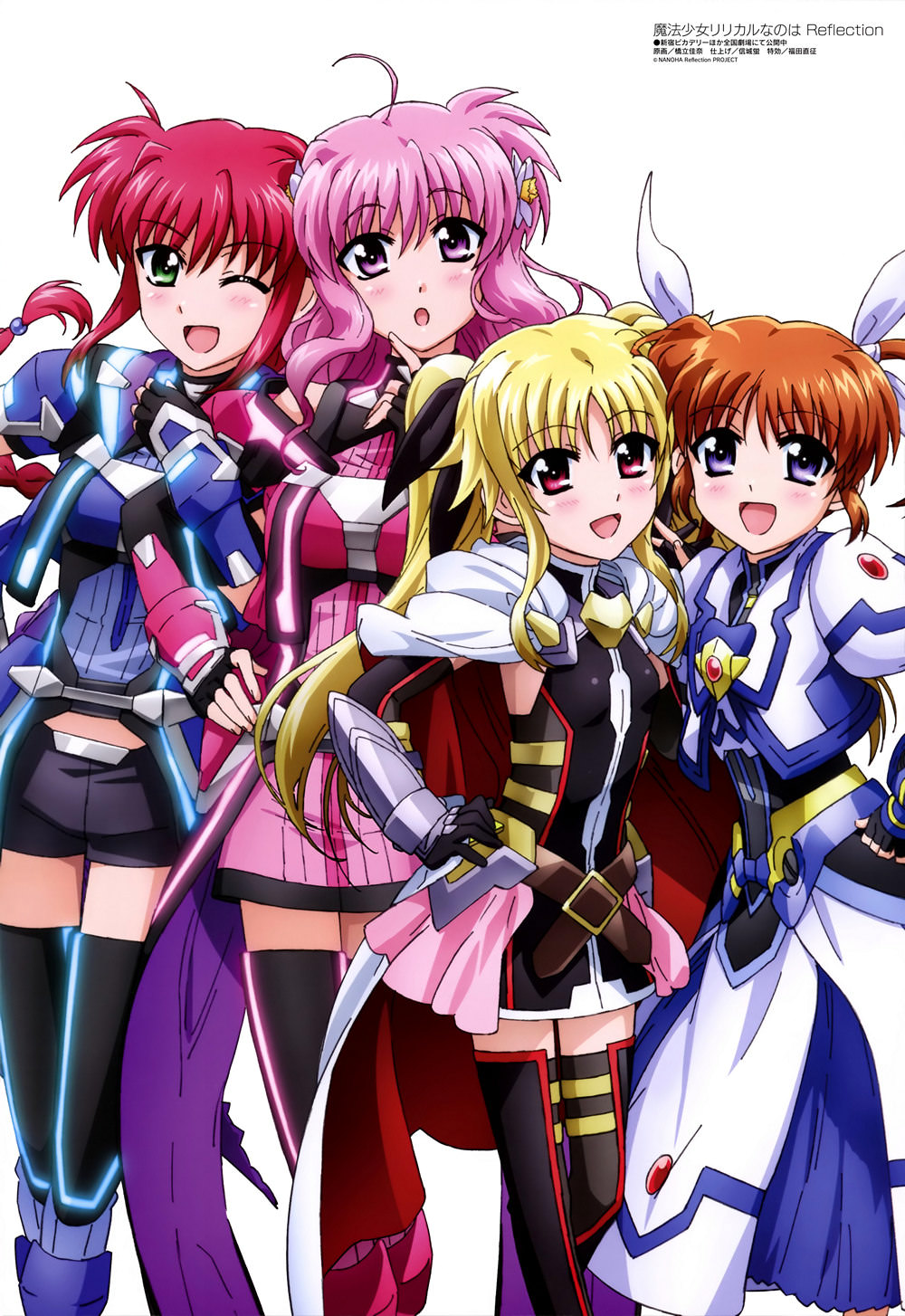 They do fight alongside one another (unlike StrikerS), yet I doubt that that’s enough to satiate the legions of NanoFate fans. Since this takes place before StrikerS, that means there’s no Teana and Subaru, and I wouldn’t have imagined that I’d be clamoring to see them again. However, there was one moment that was kind of amusing. During her battle with Fate, Levi defends Dearche and mentions how well she treats her, and she also let it slip that they “slept together”. That could just be some wonky subs… or it could be some insight into their relationship. For the sake of yuri, I’m gonna assume it’s the latter. 😛

Since I’ve already mentioned Dearche and Levi, I might as well mention them some more. Later in the movie, three new characters are introduced, Dearche, Levi, and Stern. I say new, but all three have previously made appearances in other Nanoha media such as the two PSP games and some spin-off manga. They eventually join the fight and face-off with the main trio of Nanoha, Fate, and Hayate. To me, they aren’t as memorable as the Wolkenritter were, but Levi was easily my favorite of the three, and I’m looking forward to seeing more of her in Detonation.

Speaking of the Wolkenritter—in case you might have forgotten—they are Shamal, Signum, Vita, and Zafira, and all three get in on the action in this movie. One of the nice things about this movie is how most of the important characters prior to StrikerS make an appearance, as do Nanoha and Fate’s friends. I should also mention that there’s even a new character named Yuri, but don’t get too excited, since she doesn’t live up to that name. 😛

In short, NanoFate moments are as rare as ever in this movie, but some returning favorites and several interesting new additions help ease the pain and keep this a compelling cast of characters for us to enjoy~

Moving on to the production values, I’m torn. One one hand, this is undoubtedly the best-looking Nanoha anime to date, with a TON of action and some moments where the fight cinematography is especially nice. There were a few very brief first-person sequences that I always love to see in anime, and even though the action isn’t as over-the-top and gaudy as Symphogear, it’s still very good for a magical girl anime.

On the flip side, this isn’t your standard TV anime. This is an anime movie, so expectations should be a little higher than they’d normally be. It’s been five years since The Movie 2nd A’s was released, and I don’t think that the animation in Reflection is that much better than its predecessor. This is from a different studio—Seven Arcs Pictures, as compared to Seven Arcs—but that familiar Nanoha art style is still present, and the visuals haven’t changed very much. That’s still not enough to dissuade me from liking all of the great action that this movie had to offer~

And what’s a magical girl anime without some fanservice? For the most part, Reflection plays it rather safe in this regard, except for the transformation scenes involving Kyrie, Nanoha, and Fate, which feature some brief nudity that’ll seem familar to fans of Titans and Barbie dolls. No nipples or anything like that, so it’s nothing too ecchi. Dearche, Levi, and Stern also have a brief nude scene that’s similar in nature, but with so many more scandalous shows out there, I don’t think that the fanservice in this movie is that big a deal.

I highly doubt I’ll remember much about the music a week or two from now, and even though I don’t feel driven to go out and buy the OST, I can’t deny that the many battles in Reflection were made more epic thanks to the music. As the series has gone on, I think I’ve started to take more and more notice of the music, so it’s nice that there were a lot of opportunities this time around.

For those who are lamenting that this is a movie and that there isn’t an OP, the credits do include an ending song from Nana Mizuki. Another insert song from Nana is also there to enjoy, but this isn’t Symphogear, so Fate doesn’t sing along. Such a pity. At the end of the day, it’s hard to level complaints at this movie regarding the music, so when things get dicey on-screen, just sit back and enjoy all the fight music.

If you’re watching this for the action, I don’t have much doubt that you’re gonna like this. This is an action-packed Nanoha installment like I’m sure everyone was hoping for, so no complaints about that. If you’re watching this for a NanoFate fix, however, you’re probably not going to be all that pleased. With so much emphasis on action and new characters, it almost feels like the pairings best days are behind them, but it’s a good thing that there are other avenues for fans to explore.

Overall, Magical Girl Lyrical Nanoha: Reflection is still an entertaining Nanoha experience that all but the most ardent NanoFate fanatics should enjoy, and even they might enjoy it~ 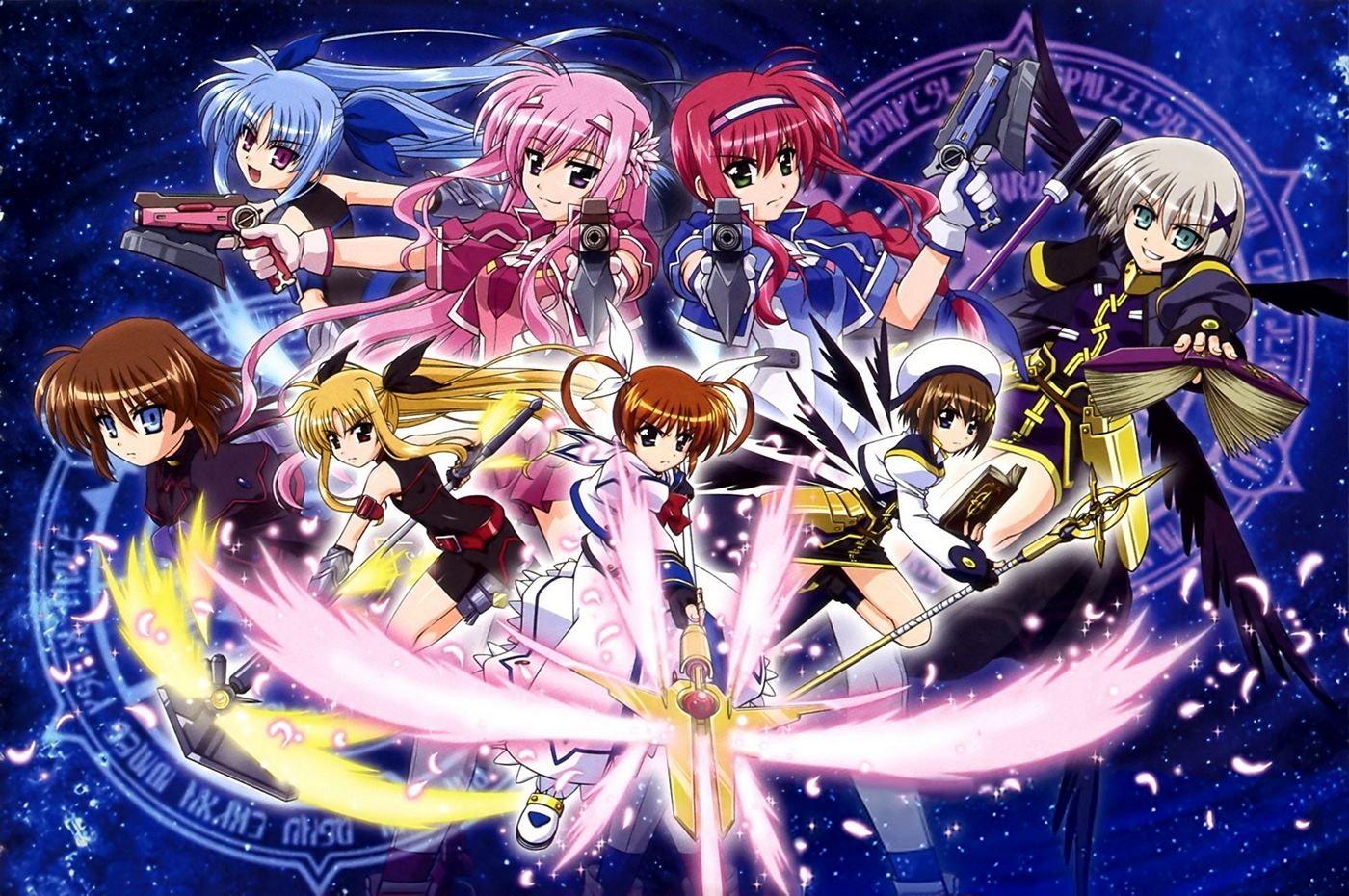