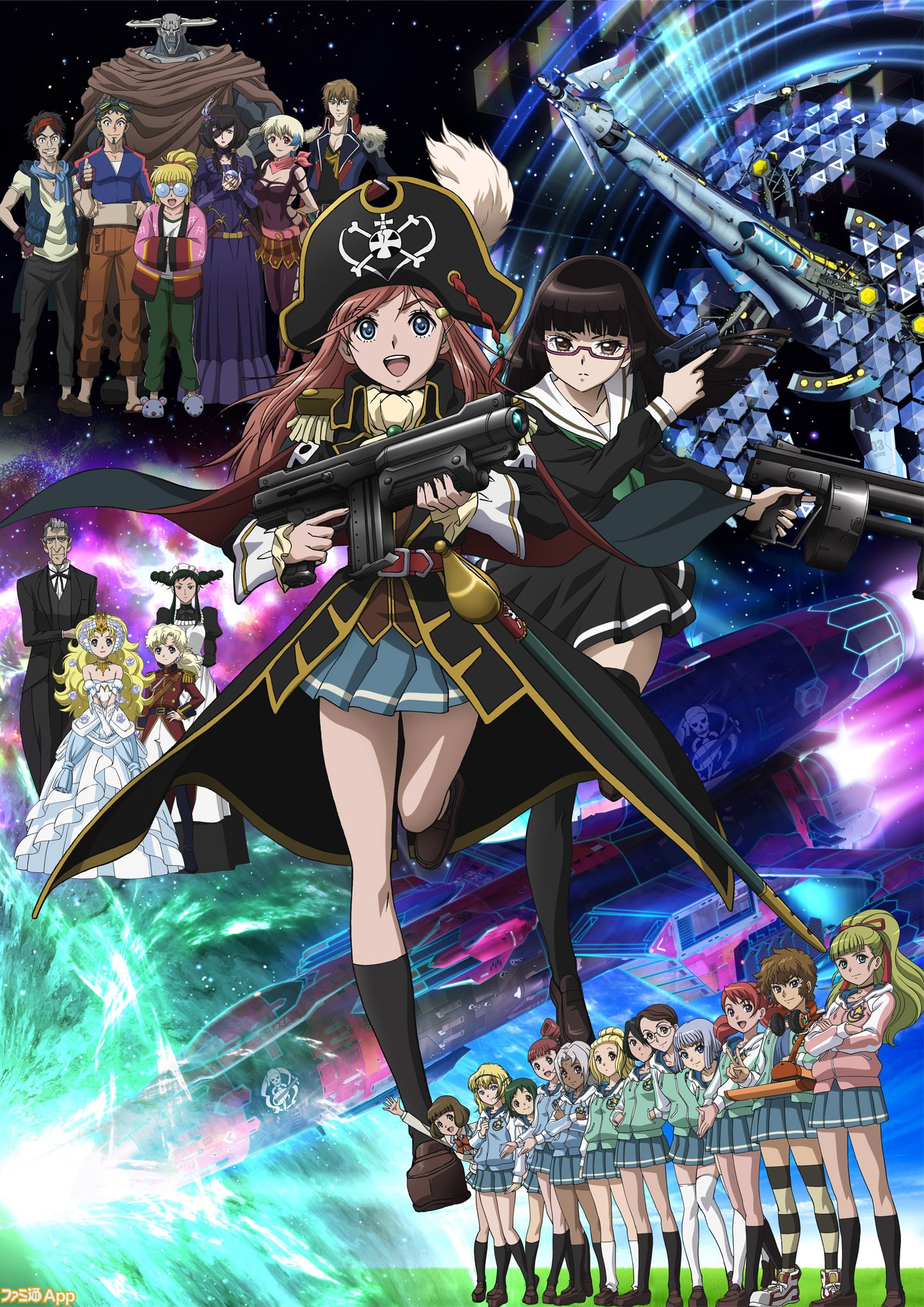 It’s understandable if you missed Mouretsu Pirates the first time around. After all, it’s several years old and doesn’t exactly scream “yuri”, does it? But you might be a little surprised to hear that this show does indeed have a good dose of yuri, and I’m not just talking about subtext~

Synopsis: The story centers around a spirited high school girl named Marika. She keeps herself busy with the space yacht club and her part-time job at a high-class retro café. One day, two strangers suddenly appear and claim to be subordinates of her dead father. They demand that she assume command of the space pirate ship Bentenmaru. A privateer ship’s compact was made during a war of independence a century ago, and according to that compact, the ship must be inherited by the captain’s next direct descendant. Marika finds herself embarking on a new life as a space pirate.

After several years, I’ve finally started watching Mouretsu Pirates. On the surface, it doesn’t seem like an anime that would be very heavy in yuri content, but I remember seeing two of the characters kiss, so I had to take a look. Luckily, it’s from Satelight, the same studio as Symphogear, so if nothing else, I should of probably expected some solid action and animation, and that’s sort of true.

I think part of me was expecting something more along the lines of Legend of the Galactic Heroes, but while you can see some influences from that and other sci-fi media, I don’t think I was ever as engrossed in this story as I should have been. I think part of that can be attributed to a lack of conflict, as developing Marika from a normal high-school girl into a confident captain takes time, and it’s harder to do when you don’t have a dedicated antagonist to help drive the story forward.

“…and even though they’re merely supporting characters that kind of get phased out after their big kiss(es) in episode seventeen, it’s nice that the yuri in this anime was more than just subtext.“

Diplomacy takes on a bigger role than I expected (“legal pirates” is a phrase I never thought I’d hear), but not to the degree of something like Kyoukaisenjou no Horizon, thankfully. I thought that there were patches of interesting developments strewn throughout the season—the Golden Ghost Ship arc comes to mind—and in the final few episodes, things get a lot more interesting and this turns into what I was hoping to see all along.

Before I started watching this anime, the only thing I knew about it was probably just the name and that two female characters kiss. That’s all. The amount of low-key slice of life-like moments surprised me a little bit, but for some reason, I really didn’t mind it all that much. Even the main antagonist mentions these space pirates putting on small shows, and at least in Marika’s case, that’s mostly true, but that doesn’t mean that these small shows can’t be entertaining. I honestly would have liked more straight-up action, though, this still somehow managed to be kind of charming and fun.

Moving on to the characters, Mouretsu Pirates has a rather large cast, and while some of the supporting characters are pretty forgettable, I wound up really enjoying the core group more than I thought I would.

Marika is the star of the show, and I think she comes across as a really likable character. An everygirl who happens to be the child of space pirates, her playful attitude serves her well, as she’s not just a space pirate. She’s also happens to be a student and waitress at a maid cafe, and overall, I think she had more than enough charisma to carry this show.

While I really liked Marika, in this anime, my heart belonged to Chiaki. The contrast in attitudes between Marika and Chiaki was always fun to watch, as was watching Chiaki get angry and embarrassed when Marika would get a little too friendly for her liking. She’s a classic tsundere, and even though the kiss between Jenny and Lynn gets a lot of the attention, for me, it’s Marika x Chiaki that I couldn’t get enough of. 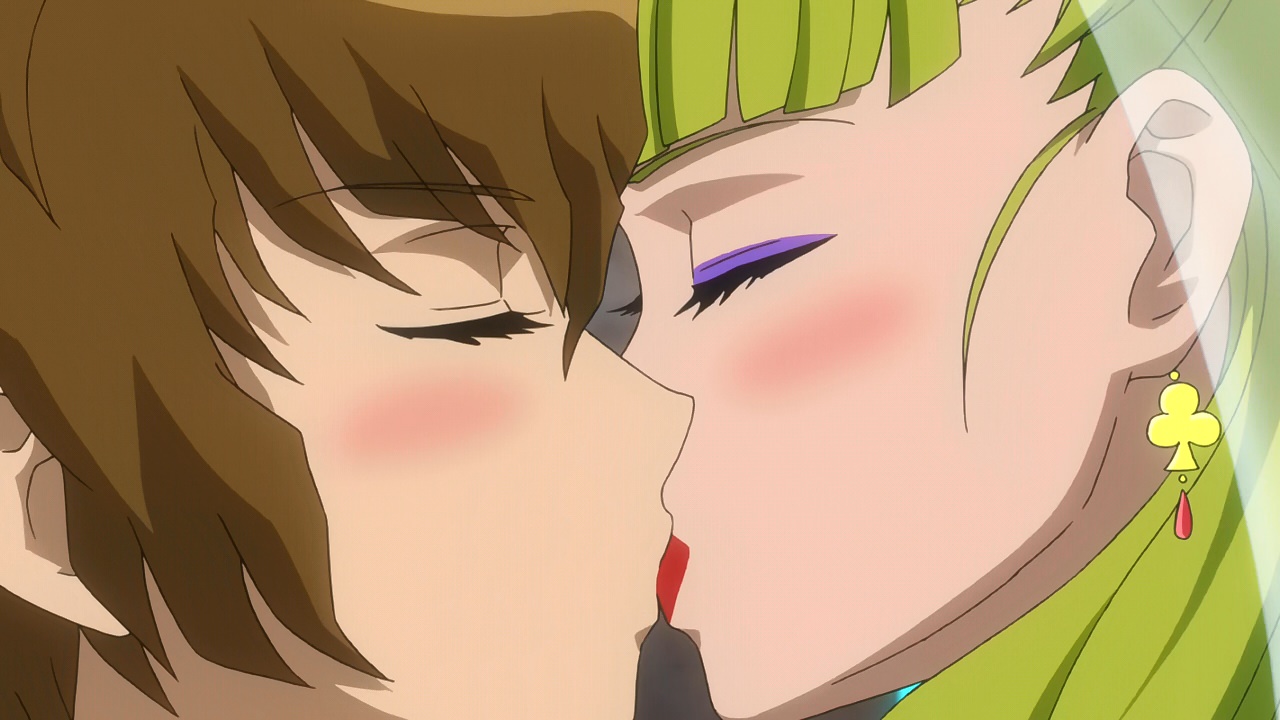 Speaking of Jenny and Lynn, it was a little surprising to see that they were actually a canon pairing. Almost all of the time in shows like these, you might have two female characters that are obviously close, but the creators stop short of actually making them a bonafide couple. That’s not the case with these two, and even though they’re merely supporting characters that kind of get phased out after their big kiss(es) in episode seventeen, it’s nice that the yuri in this anime was more than just subtext.

I thought that the other girls in the space yacht club were pretty forgettable, and I didn’t really spend too much time trying to remember their names, since they’re just your standard side characters that are easily forgotten. The crew of the Bentenmaru is a little more memorable, and I’m not just talking about Misa and Kane, who are the two that have the largest roles. Coorie is someone that I really liked, as was that evil-looking cyborg Schnitzer. 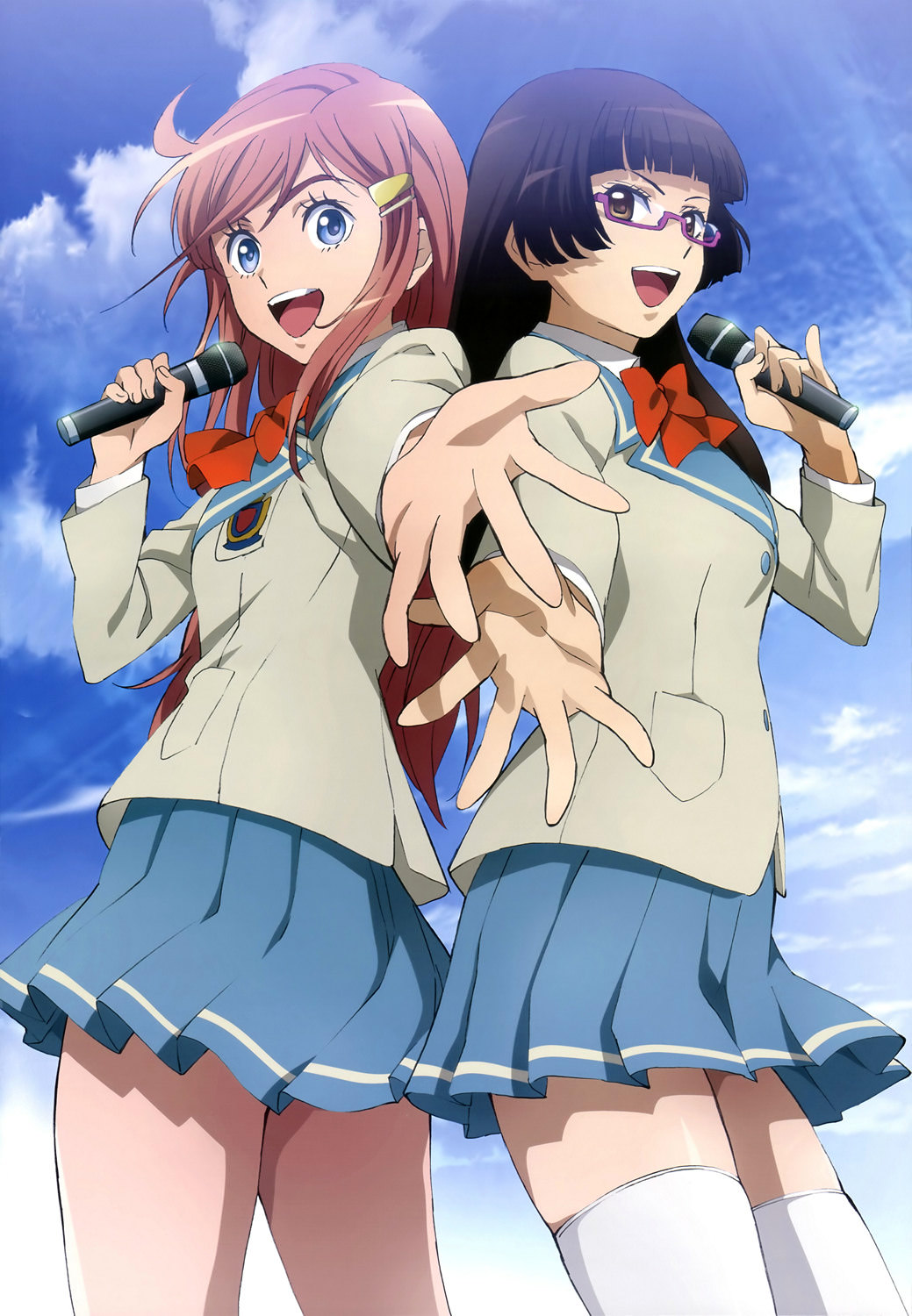 As nice as the other characters were, for me, it all comes back to Marika and Chiaki. Their Odd Couple nature was always cute and entertaining to watch, and it’s not much of a stretch to envision a future where Marika is captain of the Bentenmaru and Chiaki is her first mate~

As I’ve previously mentioned, Satelight is the studio responsible for this production, and overall, I feel like they did an admirable job. Aside from the occasional wonky-looking character art, this is a pretty good-looking anime, yet there is something that bugged me throughout. I’m talking about how generic the explosions looked during the CG action scenes involving the ships, even though the ships themselves look fine. During the ship-to-ship combat scenes, we see A LOT of energy-based weapons fired, and while this light show does indeed look good, the shots usually don’t hit their intended target. In the later episodes, they do land more, resulting in explosions that look less than spectacular.

Considering that this isn’t the most action-packed series out there, it’s ultimately not that huge a deal, but it’s still something that probably could have been a lot better. An alternate title for this series is Miniskirt Pirates, and with a name like that, you’d probably expect a healthy dose of fanservice, but it’s actually not that strong. Yeah, Marika and some of the other girls wear miniskirts, and Misa’s outfit isn’t exactly the most modest look, yet I don’t feel like there’s a large emphasis placed on sexualizing the characters. All in all, if you can ignore a few visual hiccups, the grandeur of space is pretty to look at.

As for the audio, what stuck out the most for me was what sounded like an influence from Irish traditional music, or at least a folk music influence. That’s not to say that the more traditional music that plays during the dramatic moments wasn’t pretty nice, it’s just especially nice to hear something a little different now and again. What also surprised me was despite this show having twenty-six episodes, it only had one OP. Luckily, I kind of liked it, and it’s from one of Japan’s most popular idol groups, Momoiro Clover Z. They’re also responsible for the main ED, which I was also a fan of. Despite the lack of a ton of fighting, the more dramatic/action-packed scenes still had enough punchiness to catch my attention, and overall, the audio was one of the best things about this anime.

I think people who watch this expecting a lot of swashbuckling action will probably be disappointed. I didn’t really notice that “action” wasn’t listed among the genres, but I’d say that that’s justified, since there isn’t a whole lot of it. On the plus side, this more casual approach lends itself well to camaraderie between the girls that might not have quite been there had this been a more action-oriented series. And, of course, there’s the yuri, which is the cherry on top of this anime parfait.

On a side note, I’m disappointed in myself for not including a lot of pirate puns. This is a huge opportunity that I’ve missed, and I don’t know if I’ll ever be able to forgive myself. I can already feel the shame of my inaction, and I only expect this feeling to intensify further, so I have no choice by to perform seppuku in order to preserve what little honor I have left. Goodbye, world, I hardly knew ye. But wait! There is a movie sequel—Mouretsu Pirates: Abyss of Hyperspace—that I can review to restore my honor by making all sorts of pirate puns! How lucky for you all. 😛 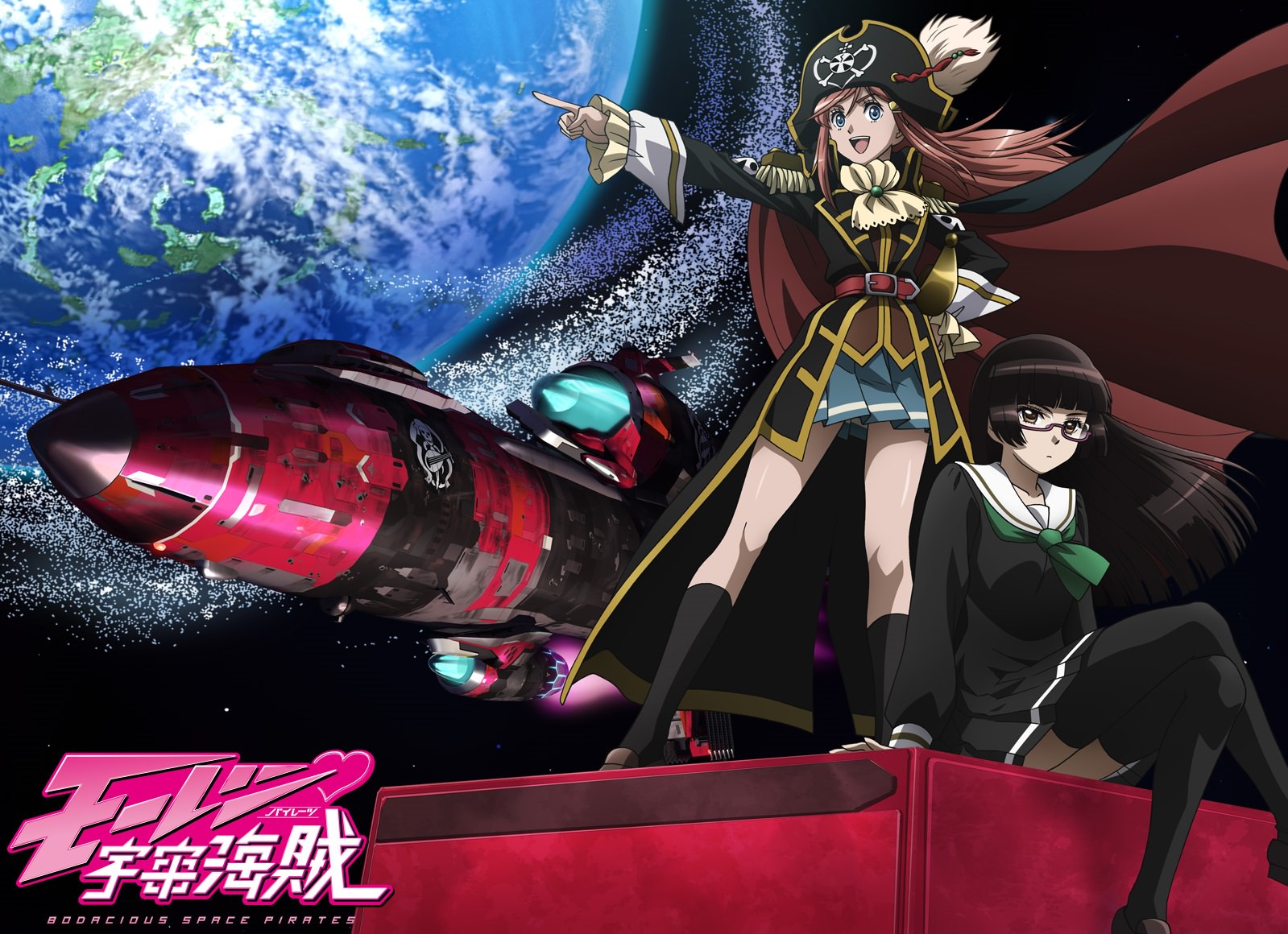