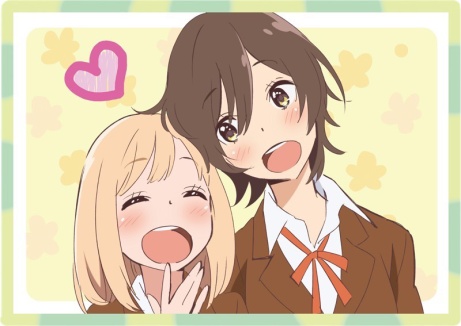 After an fortunately not so long wait, it’s finally time for the second big yuri highlight of the year. What started out as a mere rumor, soon developed into a confirmed one-episode-long OVA, and as it turns out, it’s not only that, but rather something close to a short movie even!

To say that finding out about the length of this so called OVA was a pleasant surprise, is an understatement, a big one, actually. I was more thrilled than anything to find out about the actual length of this OVA, and all of a sudden, the fact that this was not a full-fledged anime didn’t seem to bother me that much anymore.

So just about a week ago, the OVA finally aired and presented to us roughly an hour of almost solely pure and unfiltered yuri fluff. What a time to be alive!

I was quite a bit surprised to see that the movie would not start out like the manga version did. Instead of getting to know the characters first, and more importantly, seeing how the characters actually get to know each other, we start out after they already got together and only see their story so far in short flashbacks that appear in the starting sequence. An odd choice in my eyes, as what I love most in a romance is seeing how the characters get together. But to be fair, it was refreshing to see a pure yuri title starting out like this. However, as a consequence, I do think that the short movie is rather a treat for longtime fans of the manga, instead of being able to draw in people who are unfamiliar with it. Since we’re more or less thrown into the story without getting to know the character first, I think it was necessary to know them beforehand to really be able to enjoy and indulge in the story.

No problem for me, but I simply fear that this way we might lose some potential viewers who’re unfamiliar with the title or the genre in general, along the way.

Moving on, while we’re following the lives of Kase and Yamada, the movie shows us some specific moments in their blossoming relationship that smoothly fade into each other, only adding some light drama by the very end of it. All scenes are taken from the manga, but are either slightly changed here and there or enriched by adding additional content. Watching this truly gave off a similar feeling as reading along the chapters of the manga, and that’s probably one of the most important things to mention here.

The manga is already one of my all-time favorites, thanks to the charming characters, their chemistry together, and the light and heartwarming feelings the story gives off. The anime version did the same for me, but added so much more thanks to the superb voice acting, the calming background music, and this oh so lovely art style. The whole atmosphere is so soothing, given the factors I’ve already stated, but also thanks to the fact we’re not rushing through the events but taking the time that is needed. Even if each individual scene doesn’t necessarily take up a lot of time, there is simply no feeling of it being rushed. In addition to that, every scene plays out beautifully. Pictures of stunning scenery are shown every now and then, and the main girls’ cute and (mostly) innocent interactions work magic in delivering exactly what I was hoping this movie would deliver: the cutest, most endearing, and lovely yuri “show” I’ve ever watched.

This truly put a big smile on my face that probably lasted throughout the whole fifty-eight-minute run. I’m usually the type to watch and enjoy something like this in silence, but even I couldn’t help but sometimes just go like “daaawwwww” or drop a random “cuuuuute” every now and then. 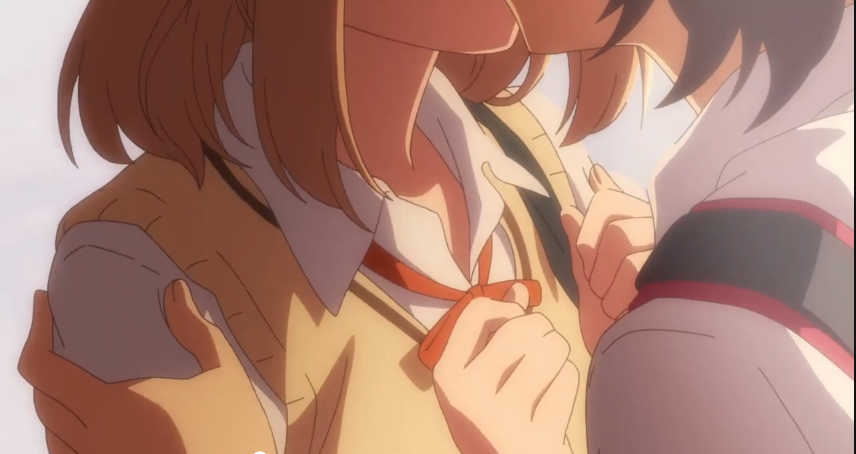 Especially the few oh so perfectly paced kissing scenes gave me a hard time not simply melting away and dying from how perfect they felt. Now, adding the few scenes of speechless Kase—who was rendered silent thanks to Yamada’s sheer cuteness or the many scenes in which Yamada breaks out in an adorable fit of panic—having little leaves appear on her head to show her distress… oh man. All of that just makes me think that this was the summit of yuri cuteness, a level that will be truly, truly hard to ever beat.

Now what’s left to say is that I’m just hoping for more. There could be another OVA of this kind, featuring the events after they move to Tokyo. Or how about a series of short episodes that each feature another chapter of the manga? Oooor how about a prequel that actually features how the two of them got together?

There are seriously a lot of possibilities, and despite my fear that this masterpiece might not appeal to a broad audience, I’m eagerly waiting to be proven wrong.