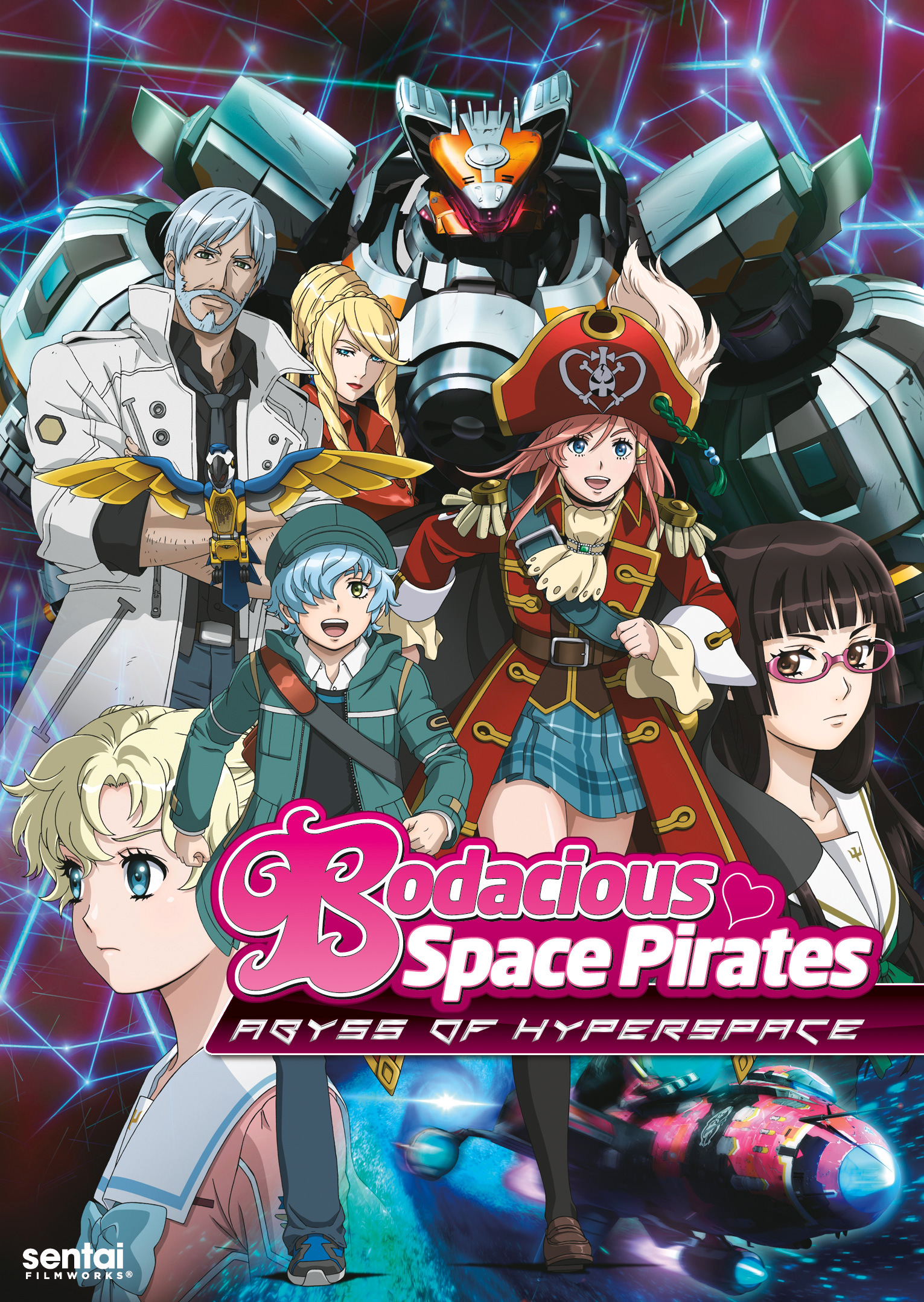 After reviewing the TV anime, we have to finish what we started and take a critical look at the follow-up movie, Mouretsu Pirates: Abyss of Hyperspace~

And it would probably be pretty annoying if I kept my promise and added in a lot of pirate puns to this review, so for the sake of our dear beloved readers, I’ll ixnay the iratepay puns. You arrrr welcome. 😛

Synopsis: Marika Katou, a third year student at Hakuho Girls’ Academy, is a legitimate space pirate with a Letter of Marque. Between her studies, leading her school’s space yacht club, working part time at Cafe Lamp, and being the captain of the space pirate ship Bentenmaru, Marika’s days are very busy. One day, Marika gets a job to rob a high-class passenger ship, and she discovers that on the passenger list is Kanata Mugen, a boy who owns a “galaxy pass”. Thus, an adventure featuring a hyperspace race between pirates and one young boy begins.

Instead of continuing on with a plot point created during the TV anime, Abyss of Hyperspace instead revolves around Kanata, a boy who’s father was a renowned professor and explorer. I guess I am a little disappointed that we don’t get to see more of Quartz Christie (who still has some unfinished business with Marika) or Ironbeard, but this wholly new story does prove to be interesting in its own right, and it fits right in with what we’ve come to expect from Mouretsu Pirates.

After Kanata sides with Marika, the looming shadow of Yggdrasil Groups follows them around and threatens to seize control of Professor Mugen’s legacy for their own profit. Corporate greed, the ultimate villain. How the company tried to invade every aspect of Marika’s life in order to steal information that could lead them to what the professor left behind for his son is strangely relevant in this day and age of online privacy concerns. More so than in the show, the attacks directed towards Marika and her crew don’t so much involve cannons and turrets as much as they involve malware and carefully planted listening devices. Different, yet I didn’t find it any less compelling than I would have had it been more action-oriented.

“Marika and Chiaki really only have like one scene together, yet that’s still more than Jenny and Lynn, who we never see interact with one another.“

Thankfully, pacing isn’t much an issue with this movie, and there were still enough light and comedic moments to keep the mood from getting too serious. Character development is rather minimal, and as much as I would have liked to have seen something more along the lines of the Golden Ghost Ship arc, the story in Abyss of Hyperspace was still interesting enough to keep my attention throughout.

Because of how the story revolves around Kanata this time around, pretty much all of the characters that we got to know in the TV anime play much smaller roles. Chiaki, Misa, Kane, Jenny, and Gruier are but some of those affected by this, which is really a shame, since I thought that one of the biggest strengths of the series was its strong cast of characters. As for Kanata himself, I don’t know. I just sort of feel indifferent about him. I don’t like him, but I don’t dislike him, so he’s just… there. That can’t be a positive thing, however, especially considering how much I enjoyed the supporting characters from the series.

Marika and Chiaki really only have like one scene together, yet that’s still more than Jenny and Lynn, who we never see interact with one another. Lynn does her thing—as do the other members of the space yacht club—to help out Marika & Co., but similar to the later stages of the show, Jenny has moved on from the space yacht club and is off tending to her company, so she’s basically M.I.A. in this movie. That in and of itself wouldn’t be that bad, but separating Marika and Chiaki, the two characters that arguably have the best chemistry? Whose idea was that?!

The two of them are still great on their own—hey there, Captain Chiaki-chan—yet some of the magic that they combined to bring to the show is still missing. On the plus side, at least there isn’t any romantic tension involving Marika and Kanata (if you disregard that one scene where Kanata wakes up to find that they’re sleeping in the same bed), so things could’ve been much worse.

I thought that Carlie, aka Scarlett Cypher, was a good addition to the cast and added to the intrigue of the antagonists, who, for the most part, were nameless and faceless. And what a pretty face if was. 😛

For me, Kanata is no replacement for Chiaki, and even though I didn’t much care for him, Marika is still as awesome as ever, so I shouldn’t criticize the characters that much. For cutting back on the screentime for some of the fan favorites from the series, I can’t score the movie as highly as I did the anime season, but most of them are still involved (to some degree), and they’re still as likable as ever. Getting shortchanged on the yuri is more unforgiveable, but if you’re kind and can overlook that, it’s hard to argue that this isn’t a good cast of characters.

When it comes to the visuals, the first thing I noticed was how the character designs have changed a little bit. For some of the supporting characters, it’s not really that noticeable, but for a characters like Chiaki and Schnitzer, they look a lot different than how they appeared in the TV anime. That’s not necessarily a bad thing, as I do think that the artwork is more detailed this time around, it’s just a bit weird to see. The best example of this change has to be Schnitzer, who went from looking like a cyborg demon to looking like the exoskeleton of a T-800 Terminator.

Anyway, the ship-to-ship battles are still here, and they still light up space with all sorts of nice effects. It’s not that hard to notice the improvements that Satelight made, so even though I prefer the old character designs to these shiny new ones, I can’t deny that this is a pretty good-looking anime movie.

To me, the music in the show was already pretty good, so it’s nice that not much has changed in this department. Some of the most prominent tracks from before return, as does the OP track, Mugen no Ai. After so many episodes, I associate that song with this anime so much that I’m glad it’s back, but sadly, the ED track doesn’t make one final appearance. There are also a couple of new insert songs that are fine, so long story short, you could say that the music in this movie is on par with that of the show.

Despite a story that is kind of interesting, for your average yuri fan, Mourestu Pirates: Abyss of Hyperspace has to feel like a bit of a disappointment. Gone are the two pairings that helped make the TV anime so much fun, and if I had known that before watching, I probably wouldn’t have watched/reviewed this movie at all.

However, even without the amount of yuri that we had in the show, this movie manages to retain a lot of what made the series enjoyable, so if you liked the show, chances are that you’ll still enjoy this new adventure. 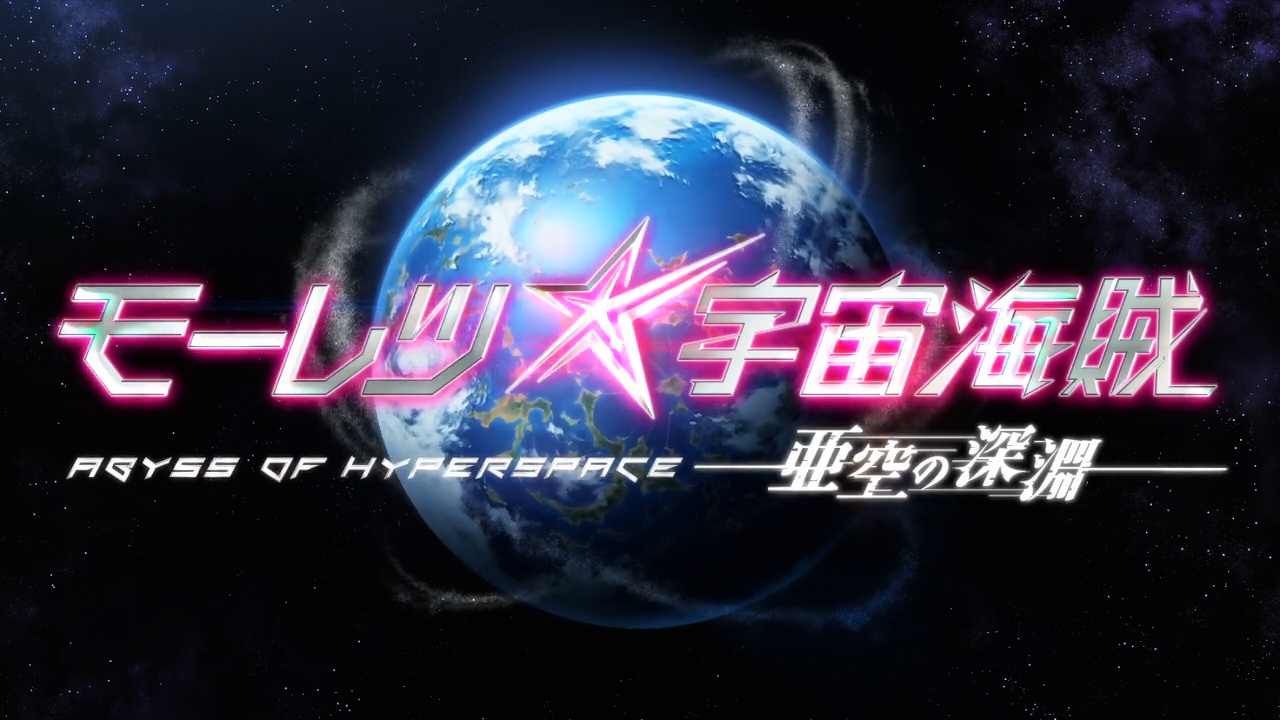