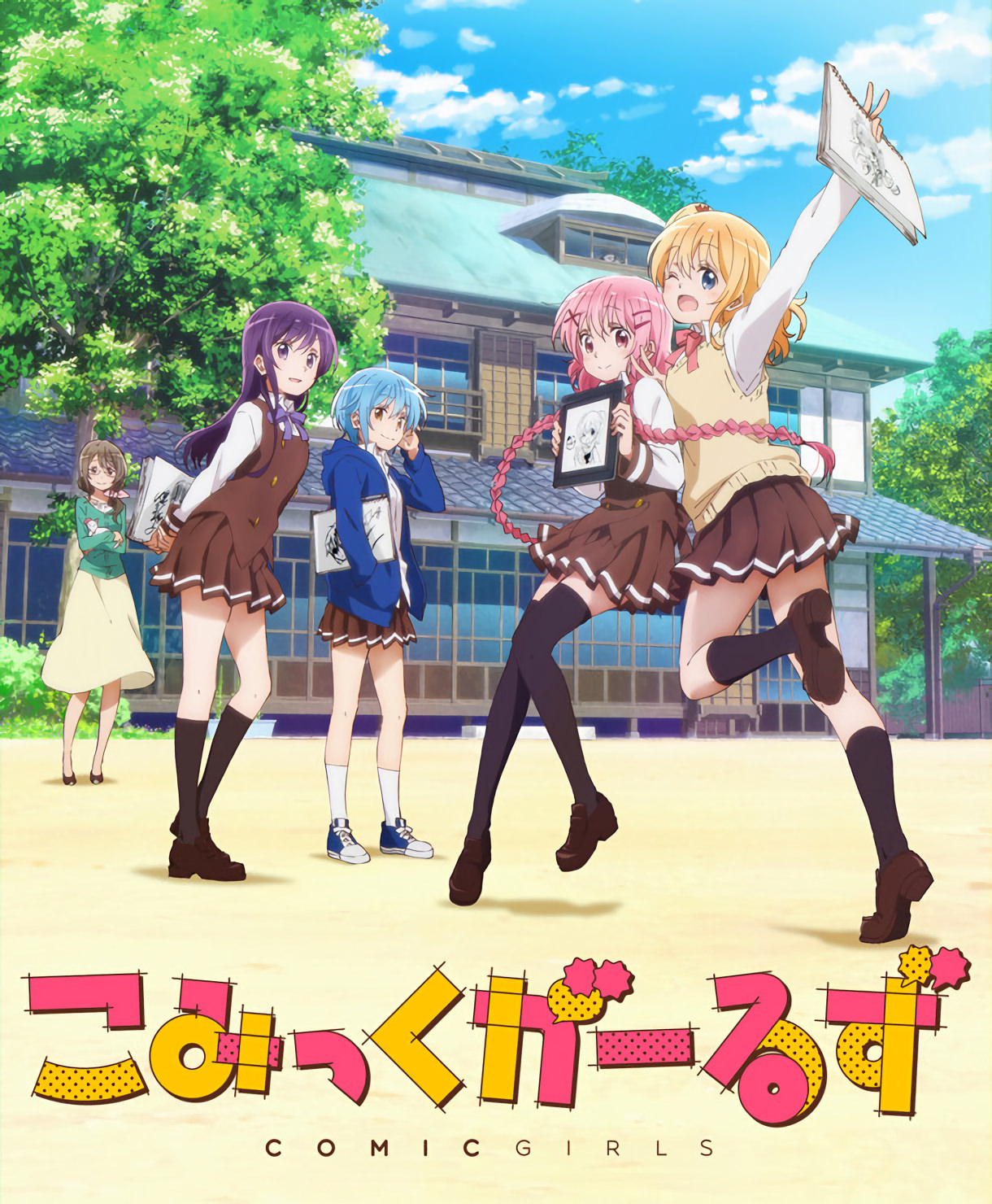 It’s always great when an anime ends up exceeding your expectations, which is exactly what happened with this one. It’s got the comedy, the characters, and the yuri, so I’m sure that other people must’ve enjoyed it just as much as I did~

Looking at the track record of the studio responsible for the production of this anime, Nexus, it didn’t inspire a lot of confidence that this would turn out to be very good. Well, I’ll admit that I was wrong and that Comic Girls ranks up there as one of the most enjoyable slice of life anime that I’ve seen.

Story-wise, this is kind of similar to Hidamari Sketch, since we have several girls involved with the arts rooming together at a dorm, though I think that a story about up-and-coming mangakas is definitely more interesting to me than art students (and Comic Girls gives us a slightly better look at the creation process, just not to the extent of an anime like Shirobako). Two of the girls—Tsubasa and Ruki—already have their work serialized, with Chaos and Koyume working towards that (with varying degrees of success).

The spin of having all of the main girls as mangakas is a welcome one, and it brings with it a lot of opportunities for jokes. The comedy is one aspect of this show that really shines, and apart from maybe Yuru Yuri, I think that this show had some of the best comedic timing that I can recall from a cute girls doing cute things anime. I thought that so many of the jokes/gags and their delivery were funny and some of them are surprisingly relatable.

“There isn’t a couple like in some other slice of life shows, yet the amount of subtext is high enough for me to compare it to a recent show like Slow Start.“

As far as character development goes, there’s a little bit of it, particularly with Chaos (overcoming her shyness and improving on her disappointing manga efforts) and Ruki (becoming more comfortable as a semi-famous mangaka), but this anime works hard to mostly keep things light and fluffy for us. If you’re looking for a laid-back slice of life along the lines of Yuru Camp△… this isn’t really that show, but if you’re wanting something particularly fun like KinMoza, look no further~

So the story was interesting and funny but ultimately pretty standard, however, it’s the characters that really won me over.

There isn’t a canonical pairing (Koyume x Tsubasa is easily the closest) or anything, but this show still ended up being pretty gay. The yuri ends up playing a big part in the comedy, especially with Chaos, who is sweet and innocent, but she always seems to find enjoyment at the thought of the girls being a little naughty. Even when scared silly, she still found the time to appreciate the size of Fuura’s breasts, so she’s almost like a perverted old man in a cute little girl’s body.

And boy is she cute! To me, she has the cuteness to rival other disgustingly cute girls like Chino from GochiUsa, Kanna from Kobayashi-san, or Renge from Non Non Biyori, but her salacious thoughts help me like her even more. I can understand if some people found her frequent crying and shrieking to be a little annoying, but I still found it to be entertaining, nevertheless.

Koyume pulls double duty as both the show’s resident big eater and the sex appeal. Unlike the others, we don’t see that much of her work, and she spends most of the time either eating sweets and lazing around or pining for Tsubasa. Tsubasa is too busy with her work to really care that Koyume has feelings for her, but that doesn’t stop the two of them from going on a date to an amusement park (even if the other girls conspired to get them to go together).

“Wing V” is Tsubasa’s pen name, and as a shounen manga creator, she usually comes across as the tomboy of the group, so it’s no wonder why Tsubasa digs her. She seems to be the most skilled artist of the group, but her chuuni delusions sometimes got a little repetitive for me. Out of the four girls, she’s probably my least favorite, yet she still has a certain charm to her that makes it easy to like her.

Ririka is the housemother of the dorms, and she basically looks after all these teenage mangaka. The motherly vibe is strong in this one, and she’s actually a former mangaka herself. Her genre of choice? That’d be yuri. We have another winner here, folks~

Midway through the season, Fuura (a horror manga creator) is introduced, further adding to an already funny show. You know that an anime has a good cast when you want to see some of the other characters starring in their own anime, and considering how generic some anime leads are, I don’t think that’s too much of a stretch.

All of these girls are entertaining on their own, but together, I’d say that they form one of the stronger casts in the genre. And it certainly doesn’t hurt that there’s quite a lot of skinship involved in this show, with pretty much every girl taking part (to some degree). There isn’t a couple like in some other slice of life shows, yet the amount of subtext is high enough for me to compare it to a recent show like Slow Start.

When it comes to animation, I don’t expect much at all from slice of life anime. It’s even more true if the anime in question is adapted from a 4-koma manga, which is the case for Comic Girls. That said, I was pleasantly surprised to see that this show actually looks really good! This is Nexus’ first anime production since 2015’s Rakudai Kishi no Cavalry (which they shared production responsibilities with Silver Link.), so maybe that off-time is what we have to thank for Comic Girls looking so polished.

From the backgrounds to the characters themselves, the aesthetics of this anime are so pleasing to the eye. You still have the high levels of moe that can compete with nearly every other show out there, but everything just seems to pop off the screen and stand out far better than what you’ll find from the likes of a Doga Kobo production. Apparently, this is the director’s first time at the helm (though he does have many credits as an episode director), and considering what a good job he did here, it’s even more impressive.

As for the audio, we have another relative newcomer hitting it out of the park. On MyAnimeList, Chaos’ voice actress—Hikaru Akao—is listed with only two voice acting credits to her name (including this), so it’s really surprising that she did such a great job as Chaos. With how often she gets scared or nervous, you can probably make a soundboard with all the little sounds she makes, including her trademark “ababababa”. The other girls also contribute good performances, but for me, it was Chaos that stood out the most.

The music and sound effects are generally similar to so many other cute girls doing cute things shows, though, I think I did notice the music more than I usually do, but that’s probably due in large part to the comedy. The OP and ED are as standard and fluffy as you’d expect them to be, and it’s probably no coincidence that the very first things you see in the OP are lilies~

If you look across the spectrum of cute girls doing cute things anime, you’ll find that the most high-profile franchises of recent years (Yuru Yuri, KinMoza, GochiUsa, and Non Non Biyori) have questionable future prospects, so it’s important that new shows rise up and prepare to take their place, and I feel like Comic Girls has the potential to be one of those shows.

It has everything you could want from an anime like this, be it great characters, impressive comedic timing, or an incredible amount of fluffiness, and on top of that, it looks great and is pretty gay. If that sounds like an anime you’d like, I’d definitely recommend giving this a go, and I can only hope that we get another season… or two… or three~ 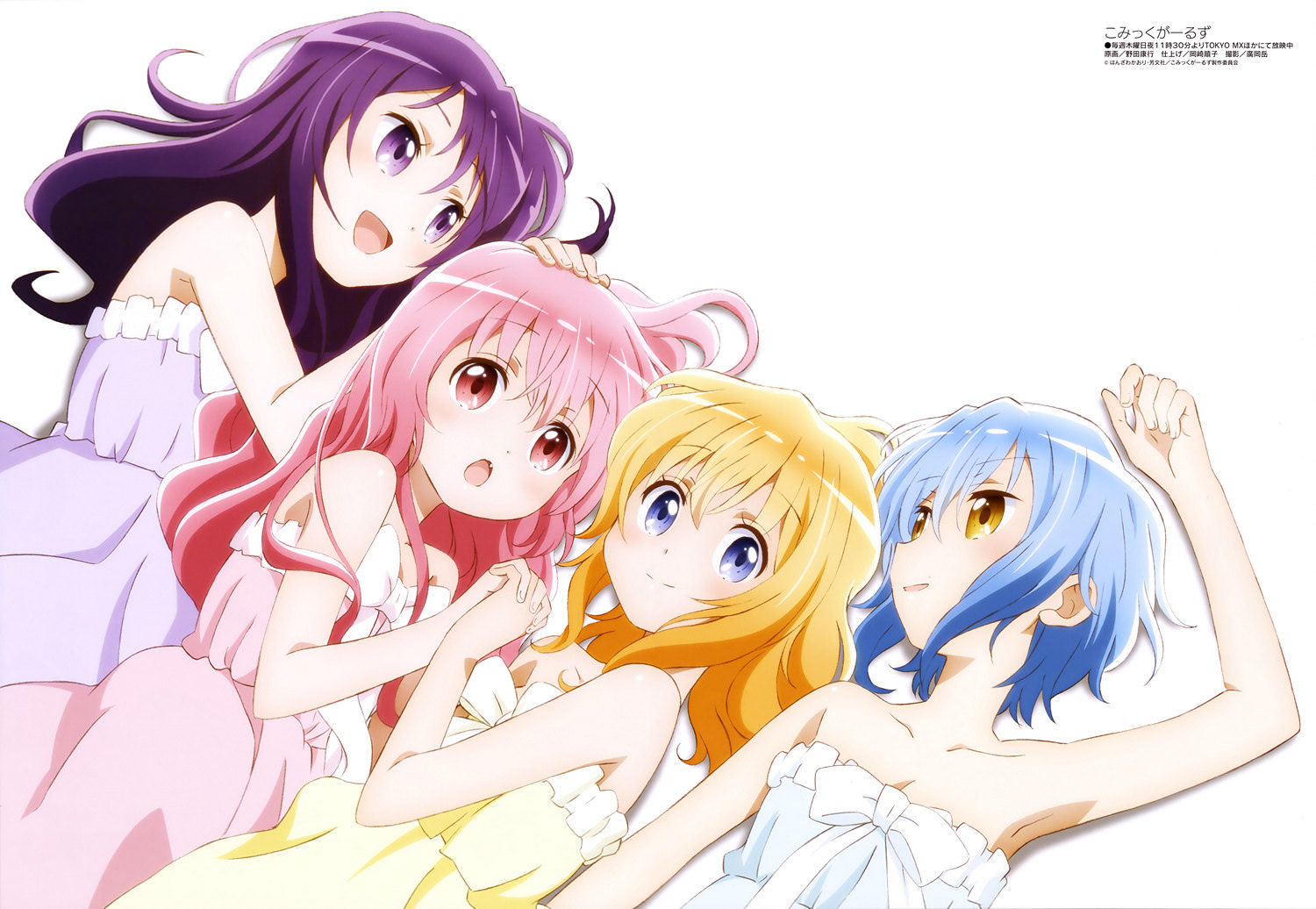