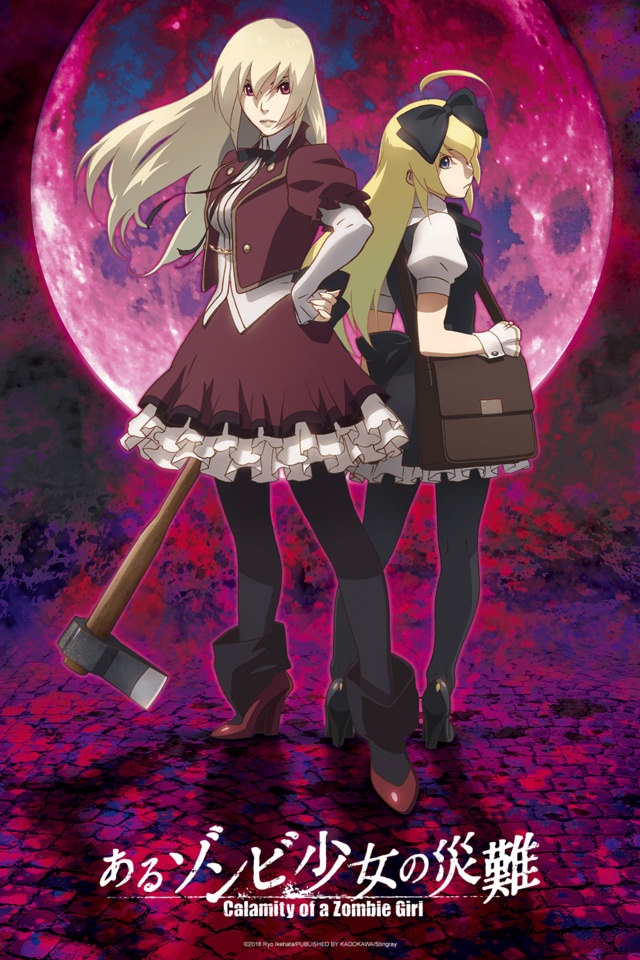 This ONA was brought to my attention by YR’s favorite low-key BL fan, B-M. Thanks! 😛

And it’s a good thing it was, because this anime needed documentation, and also, it kind of has a tiny bit of yuri. But what did we do to deserve this punishment?! That response alone should be enough to let you know that this anime just wasn’t good…

Synopsis: Late night at Kikka University when all the students have gone home for summer break. However, five people who are members of the Occult Research Club have not gone home. Calling it ‘the first cool of the evening quest’, the girls have decided to investigate a rumor about the Tokugawa buried treasure and sneak into the university’s data warehouse. What they find is not the rumored treasure, but rather, two extremely well-preserved mummies of two young girls.

Sayaka Kamoshida, who is the one to originally get her friends to sneak with her into the warehouse, secretly steals the mysterious ‘stone of life’ that was placed inside both of these mummies. Disappointed in the outcome of not being able to find the hidden treasure, they leave the data warehouse. The theft of the ‘stones of life’ is actually the trigger to resurrect these two mummies.

One of the resurrected girls was the daughter of a former Baron, who, due to an unexpected incident, became an undead being via magic. Her name is Euphrosyne Studion. The other is Euphrosyne’s maid Alma V, who was created from a homunculus. Now, the two girls attack the members of the Occult Research Club in order to get the stolen stones back.

Can the members of the Occult Research Club survive this development? Also, why were the stones of life stolen? A bloody tragedy of the late-night student dormitory attacks…

Since there were simply too many screenshots that were comedy gold, the slideshow below is supersized and contains heavy spoilers. You’ve been warned!

Contrary to what you may be thinking after reading that synopsis, this isn’t the anime directorial debut of God’s gift to cinema, Uwe Boll. That said, just reading that already let’s you know that this is going to be pretty bad, and bad it is. I don’t even know where to begin with this one. Calling this the anime equivalent of a B-horror movie might be giving it too much credit…

The story is your standard horror movie plot, a group in search of hidden treasure finds two mummified corpses and one of the members steals a stone from one of the bodies, reviving the undead and drawing their wrath. What commences is a series of events where the story manages to continuously outdo itself and get dumber and dumber as it goes on. Animal cruelty, death by flying toilet, a zombified dog, insanely stupid characters, other ridiculuois twists, this anime has so many things that evoke a facepalm and/or laugh. Yeah, this is one of those movies that actually becomes funny, and I’m not totally sure if that was intended or not…

The only positive to come of me watching Aru Zombie Shoujo no Saira (ONA) is my newfound appreciation for other anime, because this makes all those other ones seem so much better in comparison. If you like campy horror movies, this might be right up your alley, but for everyone else, you just might be better off renting a movie from Troma Entertainment like Poultrygeist. 😛

“Even though it’s not officially listed among the genres, this anime works much better as a comedy, so if you want to laugh, go right on ahead and watch it.”

Have you ever seen an old-school horror movie like Friday the 13th or A Nightmare on Elm Street? If you have, I’m sure you’ve seen those annoying teenagers that you look forward to seeing get killed in brutal ways. Well, this cast is comprised of kids just like that.

I don’t mean to take glee in the suffering of others, but these characters just don’t bring anything of note to the table. I’m probably being generous, but out of the five members of the Occult Studies Club, only two have any sort of presence about them, so the others might as well be nameless and faceless. More than the mummies/zombies themselves, they’re the ones who are really the villains, so I enjoyed seeing them die horrible deaths.

And there are other terrible people as well, like an evil professor who kills an innocent dog by strapping it to a gurney and smashing it in the head with a sledgehammer. But don’t you worry. He was conducting an experiment on it, so it comes back to life as a zombie dog. No, I’m not making this stuff up. 😀 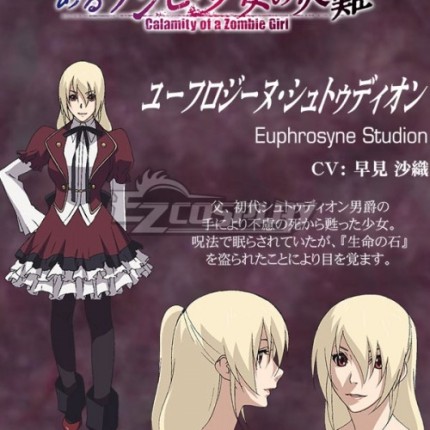 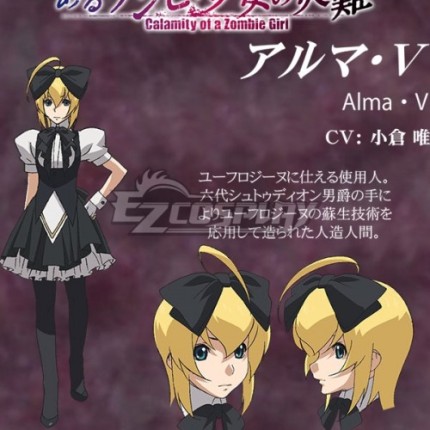 Since I’ve made it clear that I think the club members are terrible (in more ways than one), let’s talk about the true protagonists, Euphrosyne Studion and her faithful maid, Alma. There isn’t much yuri in this ONA, yet those few moments are some of the best highlights this anime has to offer, which just speaks to how bad most of the other stuff is.

Without question, Euphrosyne is the most likable character in the anime, and it’s not even close. It seems so out of place here, but Euphrosyne actually comes across as charming and cute, no doubt thanks to voice actress Saori Hayami. Despite being the walking undead, she’s upbeat and cheery, and her naiveté makes her appear even cuter. Don’t get me wrong, she’s incredibly strong, yet she seems so sweet compared to those meddling kids.

By Euphrosyne’s side is the maid that was created to serve her, Alma. Unlike Euphrosyne, Alma has a mostly serious personality, and she takes the reins on their mission to get Euphrosyne’s life stone back. It certainly helps that she can shapeshift, but only if she eats a part of the person she’s wishing to turn into. It happens on more than one occasion, so this is the most obvious sign of the two of them being zombies.

At one point, Alma kisses Euphrosyne in order to transfer the information that she’s learned, and despite appearing to be sweet and innocent most of the time, when Alma gets put in danger, Euphrosyne will act as her protector and defend her at all costs. Together, they’re cute and do their part to try and offset the blood and gore, but that’s simply an impossible task. I would have liked to have seen more of the lighter moments involving these two (and some legitmate romance would’ve also been nice), but in an anime as bad as this, these two characters provide as good a reason to watch as any you’re going to find.

This is 2018, right? Whether it was deliberate or not, this anime could probably pass as being released in 2005. It’s almost as if half the shoestring budget was used to secure the voice talents of big-name seiyuus like Miyuki Sawashiro, Tomokazu Sugita, and Saori Hayami, leaving nothing left for the animation.

The animation isn’t good, but I think it’s the art that’s the bigger problem. There are fan-made anime that look better than this, but the only people I can imagine liking this anime from a visual standpoint are the ones who are simply watching for blood and gore, because this anime has plenty of that. Brains leaking through a skull that’s been smashed (of course, the brains get eaten), a decapitation, severed limbs, a Mike Tyson-esque ear chomp, and a poor character’s eye dangling from their extremely broken face are some of the things that those people have to look forward to. Have a blast, you guys! 😀

If there’s one positive thing I can say about this anime, it’s that the sound isn’t bad. Not the greatest of compliments, but at this point in the review, anything that’s positive should be welcome. In addition to the previously mentioned voice acting, the music is actually quite commendable, really playing up the horror aspects for maximum effect. This anime is by no means scary, yet at least the music adds a lot to the atmosphere, whether it’s going for something supernatural or something more action-oriented.

Let this review be a cautionary tale for anyone who was thinking about watching it. This isn’t the worst anime I’ve ever seen or anything (congrats, Mars of Destruction!), but this is still really, really bad. Even though it’s not officially listed among the genres, this anime works much better as a comedy, so if you want to laugh, go right on ahead and watch it.

This is a yuri blog after all, but aside from a kiss, there isn’t much in the way of yuri. I heard that the main characters kiss, so I wanted to watch it. At least those who read this review won’t feel the need to follow my lead, so this one’s for you, folks. 😛