Surprisingly, even after the huge news post from only a week ago, there’s more to cover~ 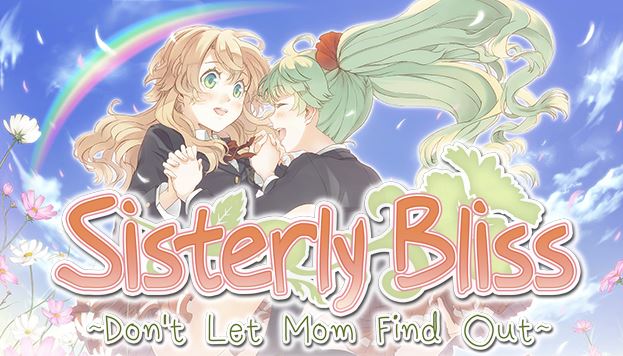 First of all, just a few days ago, eyephon‘s yuri visual novel Sisterly Bliss ~Don’t Let Mom Find Out~ has been released and is available for download over at MangaGamer. It’s currently up for $24.95.

In the rare case that you haven’t heard of it yet, have some more information.

Ichika and Futaba are so close it even surprises their friends and family at times. Ichika, the diligent, stubborn older twin, and Futaba, the childish, sociable younger twin, are an inseparable pair.

But there’s more to their love for each other than first meets the eye.

Growing up, the two did everything together. No matter where they went, the twins were never apart. And even now that they’ve grown up, their personalities diverging and leading them to different hobbies, they’re still as close as can be. For Ichika, the responsible big sister, looking out for childish, spoiled Futaba has become an everyday occurance, both at home and at school.

But one day, worried that the twins are growing too close, their mother chastises them, explaining that there’s a difference between being supportive of each other and being codependent. Regardless of how close they are, she says, they can’t stay together forever. With that admonition, the twins’ relationship begins to change.

Lurking beneath Ichika’s wish to see Futaba happy is a different feeling, one that torments her. A desire that cannot be fulfilled. And as their relationship changes, Futaba grows restless, seeing her wish to always be by Ichika’s side drifting further and further away.

What awaits these twins, who harbor feelings stronger than mere sisterly love? What form will their relationship take, and what conclusion will their story reach?

As many of you probably remember from a few months ago, beloved title A Kiss For The Petals: Maidens of Michael has been removed from Steam, like many others for its sexual content. A huge discussion broke out since certain other games with much higher sexual content were spared from this fate. I don’t want to go into detail, since we talked about this right when it happened some time ago.

What I rather want to share with you right now is the good news that another major digital distribution platform, namely GOG, will now be selling the game, and even at a discount, right now.

I’m glad to see this and hopefully many more yuri titles being sold on other platforms like this one. too, especially after the whole “Steam ban thing”.

So, yeah, go check out the game (if you haven’t already) over at GOG.com. And download the uncensored patch right here. Enjoy!

Of course you can also still download it over at MangaGamer~

Big thanks to OG for pointing this one out to us!

A short update. but better than no yuri news~