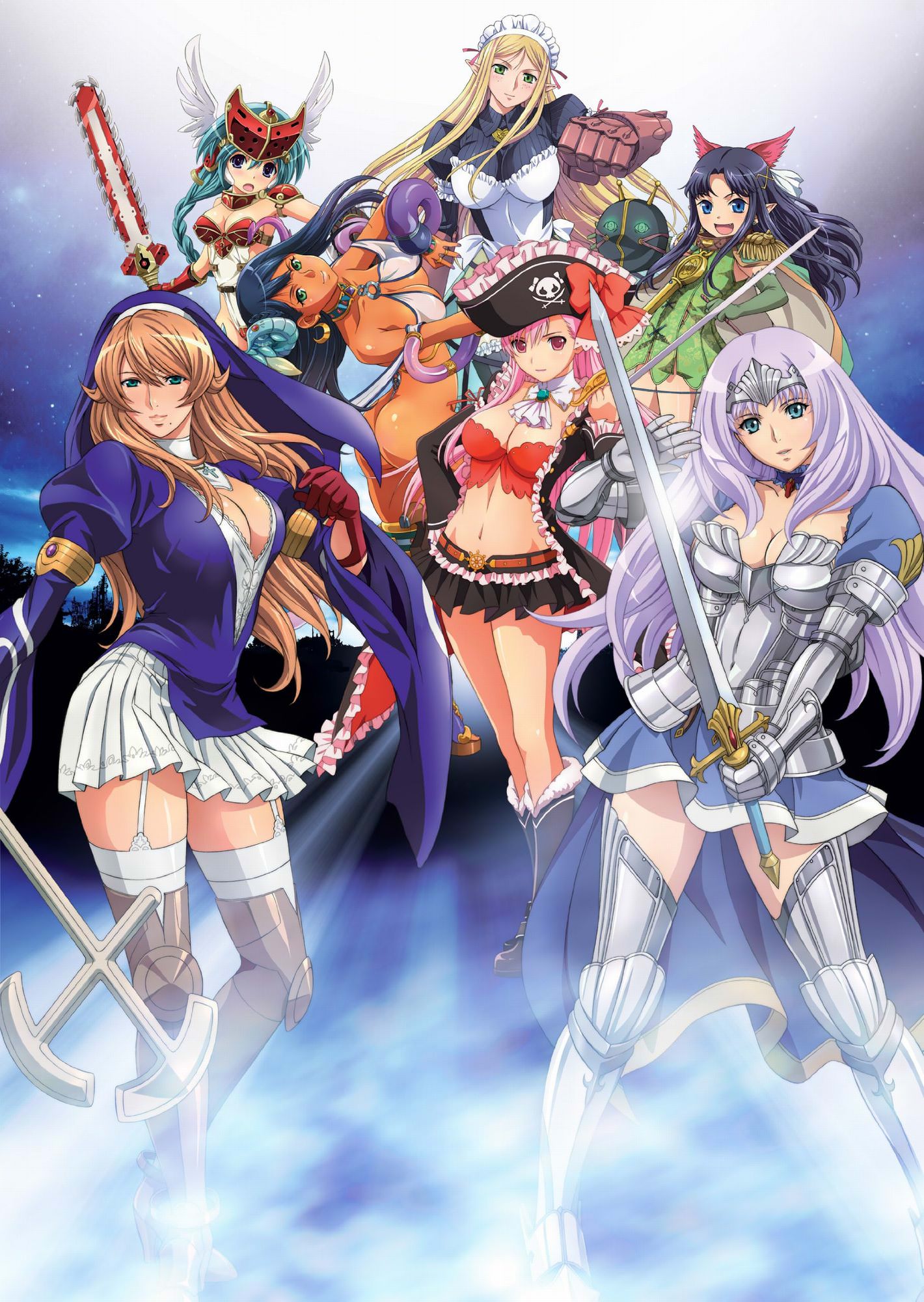 After three reviews, we’ve finally reached the last of our Queen’s Blade reviews and not a moment too soon. Judging by that statement, you can probably guess that I didn’t like this season, and that’s putting it mildly.

Synopsis: Power corrupts, and it when it appears that the once noble Queen Claudette’s ways have turned to oppression and heretical persecution, it’s up to a new generation of warriors to step up to the plate armor to bear arms and bare their naked fury in open rebellion! The odds may seem unfairly stacked in favor of the Amazonian ranks of the queen, doubly supported by her power of writ and assassins. But the incredible wits and assets of the dazzling array of daring damsels willing to risk their gorgeous skins and put their lithesome bodies on the line against her, might just expose a few unexpected weaknesses in the queen’s support!

It’s not like the previous installments of Queen’s Blade were great or anything, but this season managed to be a big letdown in pretty much every way. After Leina’s victory in the previous Queen’s Blade tournament, she’s mostly absent this season, and we’re left with Claudette assuming the role of queen. The subtitle, Rebellion, refers to what flares up among citizens due to Claudette’s heavy-handed rule. At this point, I was already wary of how bad the story might become, but it turned out worse than I thought.

Now more than ever, the story appears hastily slapped together, and the one defining feature that has helped to make the plot of previous seasons somewhat interesting—the Queen’s Blade tournament—is gone. What’s replaced it in Rebellion is a very cliché story involving a tyrannical leader and the resistance faction that rises up to challenge her stronghold over the continent. The show itself even sends mixed signals as to how Claudette is ruling the land. Before mentioning how the queen’s army has grown exponentially and invasions and massacres have become commonplace, it’s mentioned how, thanks to Claudette’s encouragement of free trade, the citizens are more prosperous than they’ve ever been. It’s this kind of jumbled storytelling that made me long for the simpler days of women just fighting to become the next queen.

“Almost all of the characters that appeared in previous seasons are missing in action, and they’ve been replaced with characters that are more shallow, less interesting, and just all-around far more generic.“

For almost the entire season, Claudette just sits on her throne and looks stoic while Ymir is the one that really makes life difficult for the new characters. And those new characters don’t help matters at all and contribute very little to the overall story, but more about them later. Due to the underwhelming story, Rebellion probably would’ve been much better as a simple OVA, instead of a drawn-out, boring excuse to add even more fanservice. And the ending is a pretty big disappointment as well. I don’t want to spoil it, but if you were expecting an epic final battle, that didn’t really happen. The show kind of breaks the fourth wall when even Melona mentions what an anticlimactic ending that was.

All in all, this season took what could have been a halfway decent idea and didn’t bother to try and make it even remotely interesting. In short, this feels like a blatant cash grab, more than anything.

Okay, so the story was bad. That’s not really anything new, but this season sees a whole host of changes to the cast of characters, and to me, that’s probably the most damning thing about Rebellion. Almost all of the characters that appeared in previous seasons are missing in action, and they’ve been replaced with characters that are more shallow, less interesting, and just all-around far more generic.

This all starts with Annelotte, who plays the role of knight that is fighting for all that is good. She’s not all that different than Leina, it’s just that she’s missing the personality and charm that helped make Leina a somewhat interesting protagonist. Her background is only briefly touched upon, and the most interesting thing about Annelotte—her half-demon status that allows her to transform into a demon—isn’t really explained. She’s admired by a lot of the other characters, and I can’t really understand why. 😛 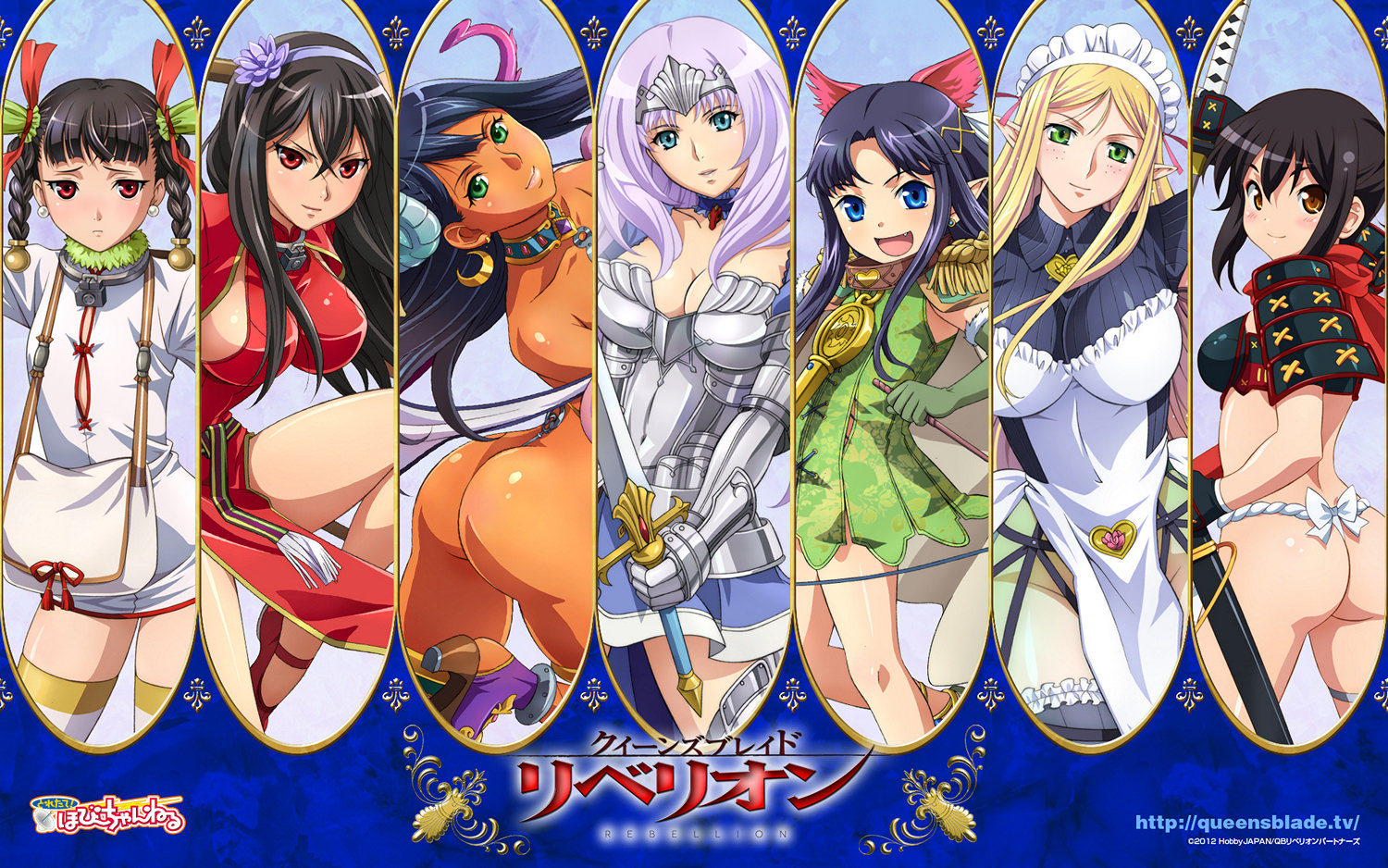 It’s also disappointing to see Elina stray away from her Leina-loving siscon ways. In past seasons, she’s always had a thing for Leina, but with Leina mostly out of the picture this season, I guess she needed a new object of her affection, so that has become Claudette. That feels tacked-on, more than anything, and during the final battle, Elina is nowhere to be found. However, the worst thing involving the characters is to see what’s become of Aldra. Once the back-to-back winner of the Queen’s Blade tournament, Aldra has gone from all-powerful queen to a submissive wife who only cares about tending to her husband. Yeah, that was the shittiest decision ever…

Liliana—the pirate captain—was kind of interesting, but she doesn’t play that big a role, and before you know it she’s gone for good. Mirim may be the most generic character of the season, and not even her special “Hyper Vibration” armor (which is every bit as lewd as it sounds) can save her from being easily forgettable. Sigui is another nun-like character, but I thought she paled in comparison to Melpha and didn’t have much in the way of personality. Sainyang, Tarnyang, Izumi, Laila, Branwen, and Eilin barely even registered a blip on my radar, and none of them really provided anything of note.

Yuit and Vante were probably my favorite characters this season, and Vante can’t even talk, so that should tell you what I thought of the other characters. Yuit is tinier and cuter than this season’s iteration of Ymir, and out of all the important characters, she’s probably sexualized the least. That includes Vante, who despite being an automaton that’s being controlled by Yuit, she still has boobs, and the show still feels compelled to show them. Luna Luna wasn’t so bad, at least compared to the others, but her affection for Annelotte seems insincere and added only to placate yuri fans that are looking for a pairing to ship.

Ymir is nowhere near as entertaining as she was in prior seasons, and even Claudette turned out to be pretty boring antagonist, so as a whole, the cast of characters were a major downgrade from past seasons. The same can be said of the yuri, so it’s disappointing to see a series that had some things going for it drop the ball in such a spectacular way. Assuming the series continues past Unlimited, I wouldn’t be all that surprised if we don’t see these new characters again, and I’m more than okay with that.

Much like the previous seasons of Queen’s Blade, the production values remain the best thing about the series. I don’t think that either the visuals nor the sound are quite as impressive as they were in past seasons, yet they’re the only two things in this anime that seem competent. I also don’t think that the action is as entertaining as it has been in the past, and even though the music in particular has always been pretty good, and I think it deserves a better anime than this. I’m not really the biggest fan of most of the character designs, especially for the returning characters such as Claudette, Elina, and Leina, yet others like Liliana, Luna Luna, and Branwen are really nice. Overall, the music and animation do their part, it’s just that almost everything else is below average, and I doubt that’ll ever change.

After a surprisingly competent beginning to the franchise, Queen’s Blade: Rebellion undid a lot of the goodwill that earlier seasons had built up with me, and if I didn’t feel obligated to watch this and write a review about it, I definitely would have dropped it. I feel like Rebellion makes the previous seasons look a lot better in comparison, and thanks to this season, any enthusiasm I had for the series is gone, so I’m not even the slightest bit interested in Queen’s Blade: Unlimited. Bad story, bland characters, less yuri. This is one of those bad sequels that you hear about, and at this point, I’m just glad that I don’t have to do any more of these Queen’s Blade reviews. 😛