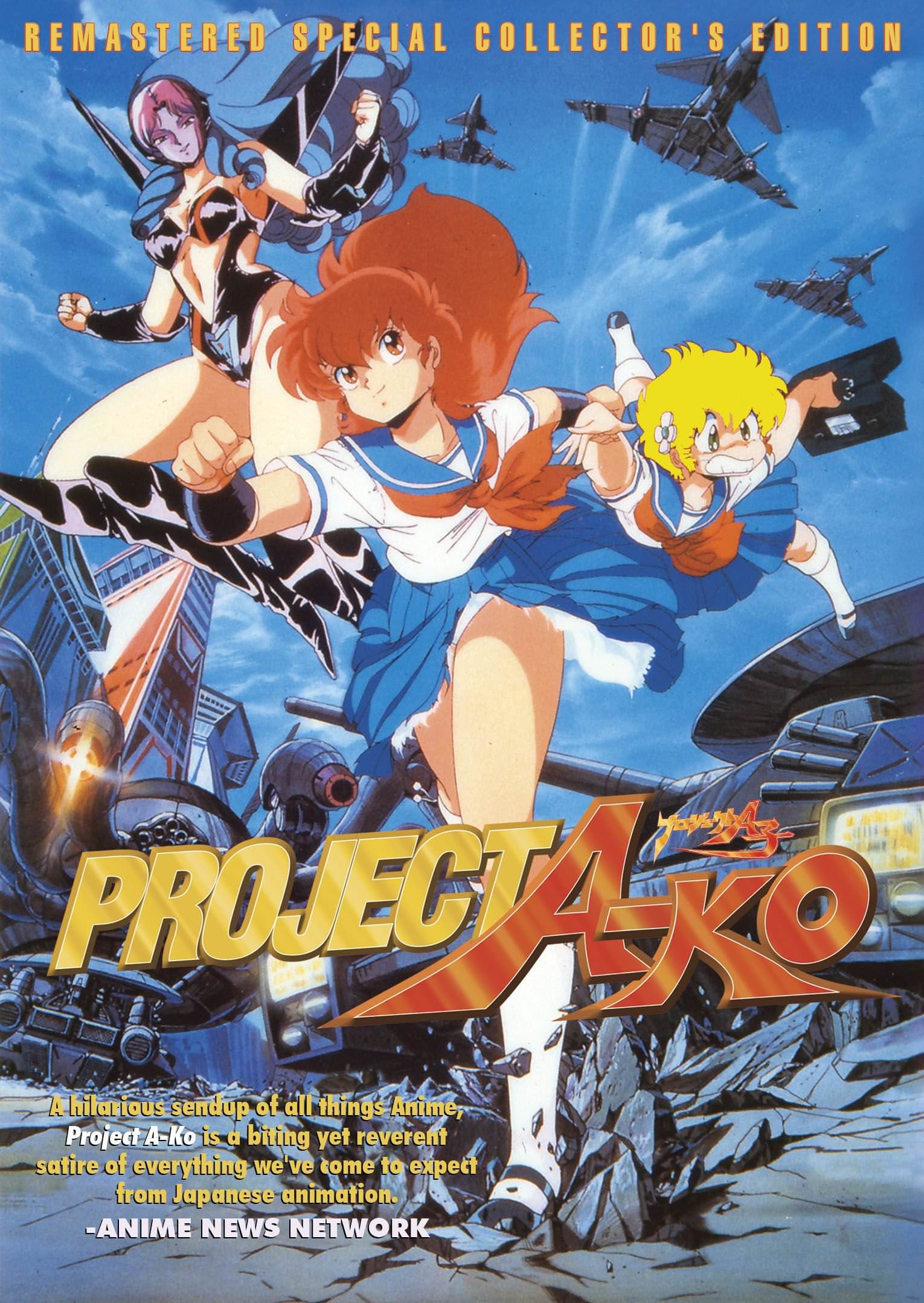 Thanks to the internet, old anime doesn’t have to fall by the wayside and be lost to the ravages of time. The anime we’re taking a look at today is one such title, Project A-Ko. Never heard of it? That’s not too surprising, since it was released in 1986. 😛

Synopsis: Sixteen years have passed since a mysterious alien ship crashed on Earth. Graviton City, once leveled by the ship’s crash, is now a bustling metropolis. Within the city’s high school, superhuman high school student A-Ko Magami dukes it out with the diabolical genius B-Ko Daitokuji, who will stop at nothing to win the friendship of A-Ko’s buddy C-Ko Kotobuki. Meanwhile, in outer space, another alien ship is on course towards Earth to find its planet’s lost princess.

A good story is something that is timeless, it’s just that… but Project A-Ko doesn’t have a good story. The story of Project A-Ko primarily takes place on two very different fronts. There’s the tug-of-war between A-Ko and B-Ko over C-Ko, and then there’s the larger story of what the mysterious goings-on in space really mean. For me, I found the A-Ko vs. B-Ko storyline much more interesting and entertaining, even though I’m sure that two characters fighting over another is a storyline that everyone has seen time and time again.

B-Ko has had a rivalry going with A-Ko ever since kindergarten, with C-Ko being the central reason behind the grudge. B-Ko’s jealous of the close friendship between A-Ko and C-Ko, and she wants C-Ko all to herself. Cliché as it may be, this yuri love triangle-of-sorts is the main reason why I watched this, and had this movie been nothing more than two girls fighting over another, I wouldn’t have had a problem with it. It’s not very original, but it is fun.

The other storyline involving a lost space probe is very underwhelming, and pretty much the only positive thing it contributes to the story is a lot of action. Most of this action takes place in the final third of the movie. The first two-thirds do involve the battles between A-Ko and B-Ko, but the ease of which A-Ko thwarts B-Ko’s plans means that the action scenes are fleeting. Comedy is also listed among the genres, and a lot of that comes courtesy of B-Ko’s many failed attempts to remove A-Ko from the picture. This movie doesn’t take itself seriously whatsoever, and its over-the-top nature fits right in with what I like to see.

“Her dogged persistence to win over C-Ko is admirable, and B-Ko is actually a genius that uses all of her smarts for what’s really important… building mecha to use in her feud with A-Ko.“

I said earlier that the story isn’t good, but I do admit that it is entertaining. It’s simple and silly, and what it lacks in complexity and depth it does a decent job of making up for it with crazy shenanigans that are pretty enjoyable. Just put your brain in autopilot mode and enjoy the weird story for what it is.

The cast of characters in Project A-Ko is small, with A-Ko, B-Ko, and C-Ko getting nearly all of the attention. There’s practically no character development at all in this anime, but these three girls are still fairly entertaining characters. Like the story, the characters lack any real depth, and their stories and backgrounds aren’t explained very well.

It’s not especially clear why A-Ko seems to have superhuman strength (it’s intimated that her parents are Superman and Wonder Woman, but that scene is very brief), and when she’s not goofing off with C-Ko, A-Ko’s always rushing to school in a running gag that sees her always level a shady character that works for the bad guys. Still, A-Ko does have enough personality to keep from becoming bland, and the same can be said of the other two main characters.

B-Ko may not be the titular character, yet she was the one that I liked the most. Her dogged persistence to win over C-Ko is admirable, and B-Ko is actually a genius that uses all of her smarts for what’s really important… building mecha to use in her feud with A-Ko. By the end of the movie, she’s no longer the main antagonist, but that other guy is easily forgettable, so he might as well not even exist.

Then there’s C-Ko, who is mostly just an annoying character and it makes you wonder what B-Ko sees in her. She’s loud and childish, and she always wants to be around A-Ko. Even though the relationship between A-Ko and C-Ko seems platonic, the subtext is definitely there, and it’s very easy to ship the two of them. Personally, I would’ve liked to have seen B-Ko win C-Ko’s heart, if only for the yuri potential.

There is also another character named Mari that ended up being surprisingly entertaining. Imagine a hulking, muscle-bound character… that has the voice of a little girl. She’s apparently a Fist of the North Star parody, and even though I haven’t seen that anime, she was still a pretty hilarious character.

A-Ko, B-Ko, and C-Ko all have some charm, so it’s a little disappointing that they’re so underdeveloped as characters. In an hour-and-a-half-long movie, I guess that’s understandable, but at least these characters are still far more interesting than the cast of last week’s review.

I don’t even know how you go about critiquing the animation of a thirty-year old anime. Comparing Project A-Ko a little bit to other anime of the era such as the previously mentioned Fist of the North Star or Dragon Ball, I think the action scenes mostly hold up surprisingly well. The number of extended action scenes in this movie is pretty modest, but when they do happen, they look good. The non-action scenes are less impressive, but I that’s to be expected. The complexity of the ship/mecha designs are also cool to see, and for those of us who weren’t around to enjoy it at the time, the visuals are a fascinating glimpse of anime in the 1980s.

In the first few minutes of this movie, you’re audibly reminded that this movie was released in the 80’s, and it felt so strange to hear that distinctive synth-pop sound in an anime. Still, I liked it a lot, and it’s far from the last instance of that sound. Apparently, the Project A-Ko Original Soundtrack is chock full of American pop music, and it’s pretty glorious stuff. I mean, just listen to that track above. Or how about this one. Last but not least, there’s this one. All in all, this movie had some really nice music, and I’m now tempted to go listen to some 80s pop songs… 😛

More than anything, it seems that the creators of Project A-Ko just wanted to throw caution to the wind and make something unique and fun, and I think they accomplished their goal. The strange story and shallow characters kind of hold the movie back a bit, but the yuri love triangle does make things interesting for yuri fans. If you’re curious to see what anime was like more than thirty years ago, this might be worth your time~