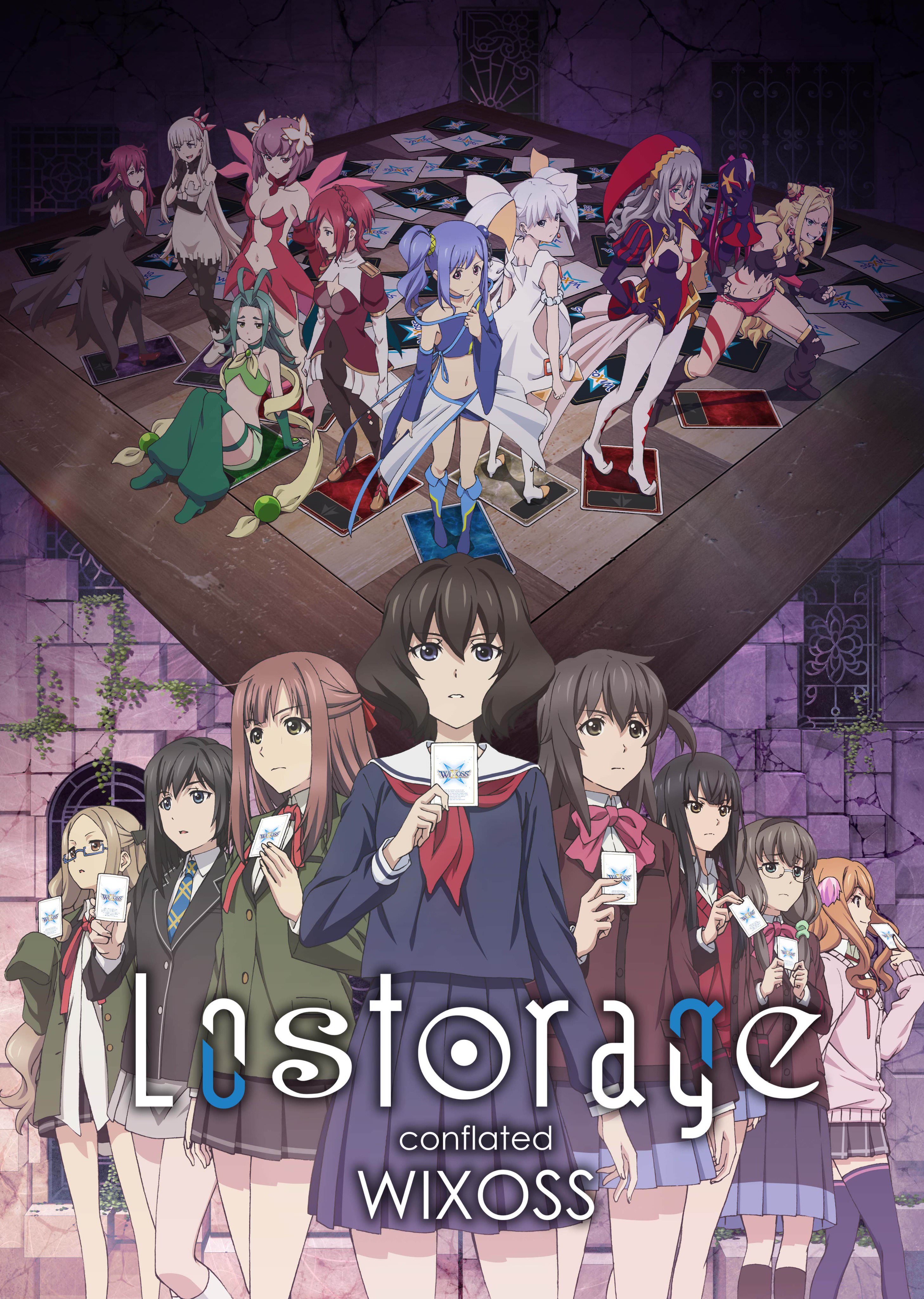 After reviewing all of the previous installments in the series, I think we have to also check out Lostorage Conflated WIXOSS, which takes almost all of the characters in the series and forces them into even more battles. That sounds pretty cool, but this new season can’t possibly live up to that cool idea, can it? My answer? No, it doesn’t…

Synopsis: The peaceful days turn out to be short-lived as the shadow of another Selector Battle looms large. Kiyoi Mizushima is the first to notice that things are amiss, and she makes her move to put an end to the cycle of darkness. The Battle this time includes a new card, “Key,” and has been set up with rules different than before. With both the mastermind and their motive shrouded in mystery, the darkness grows ever deeper and more menacing. Suzuko Homura, Chinatsu Morishita, Hanna Mikage, Ruuko Kominato, Yuzuki Kurebayashi, Hitoe Uemura, and Akira Aoi, the Selectors gather once again.

On paper, the idea behind Lostorage Conflated WIXOSS seems really interesting: Bring back (almost) all of the previous Selectors and LRIGs and have them battle it out in order to determine a sole winner. But even more than previous installments, I thought that the story was convoluted and, overall, I was a little disappointed with how the story played out.

This is more or less a continuation of where the storyline from Lostorage Incited WIXOSS left off. Kou may have been defeated, but Carnival is now inhabiting his body, and with a whole new round of battles starting up, she’s continuing to torment the other Selectors and LRIGs. Kiyoi, Suzu, Ruuko, and the other girls all have their own individual reasons to participate in the battles (it’s not like they actually have a choice), but at the end of the day, it’s more darkness and despair that are fueling these new battles.

One of the major problems I’ve had with the WIXOSS series is how the rules of the game (and world) have always been really unclear, and that’s even more true this season. Some things that held true before no longer do (such as coins no longer determining a winner), and unless you’re a hardcore WIXOSS fan, chances are that you won’t understand why certain things happened (like why Kiyoi received Dona), and it almost feels like the rules are just being made up as we go along. The Selectors don’t even know the new rules, so, for me, this season was at its best when it set aside the vague rules and just focused on the Selector battles themselves.

“At the end of the day, if you consider yourself a fan of the WIXOSS anime, you’ll probably end up enjoying this season, yet the one-note main villians and unclear rules that govern the world took away some of my enjoyment.“

That said, I thought the battles were unfortunately hit-and-miss. The showdown between Ruuko and Suzu was pretty great (despite at conclusion), as was the Carnival versus Layla matchup, but then you have complete duds like the Kiyoi versus Carnival battle that were anticlimactic. However, most of the battles were entertaining, even if some fan favorites didn’t fight more than once. Also, I wasn’t really a fan of the reasoning for the battles beginning again, and everyone—including the characters—are kept in the dark for a majority of the season.

All in all, the plot is just as mysterious and otherworldly as you’d expect from a WIXOSS anime, but now more than ever, there’s a “been there, done that” feel that I just can’t shake. The last few episodes really turned up the excitement factor, though, I don’t think it was enough to make up for the rest of the season.

With multiple seasons, an OVA, as well as a movie, there have been A LOT of characters in the WIXOSS series, and one of the major selling points of Lostorage Conflated WIXOSS is bringing them all together for a battle royale. It’s undoubtedly pretty awesome seeing characters from Selector and Lostorage mix and mingle, yet it somehow wasn’t as exciting as I had hoped.

Kiyoi has to be considered the main protagonist this time around, and after seeing Suzu and Ruuko again, I think she’s definitely an upgrade over the two of them. In one form or another, she’s has been around since the beginning of the series and through both the Selector and Lostorage seasons, and I just like how her aloof personality differed from Ruuko and Suzu’s more warm and friendly personalities.

Ruuko and Tama have probably been the best duo in the series, and that stays true for this season. It was great seeing Tama as a human, but she eventually returns to being an LRIG, and that wasn’t so bad, since she was still with Ruuko. They’re still OP, and I’m probably not alone in saying that I care a lot more about those two than I do about Suzuko and Riru.

Keeping with the original Selector girls, Yuzuki and Hitoe also return, and while it was nice seeing them, their quick defeats were really disappointing, and I was hoping they’d both play a bigger role as Selectors. Also, it’s kind of weird how the entire incest subplot is missing from this season. Kazuki isn’t seen until the final moments of the last episode, but since that story development was one of my least favorites of the entire series, I won’t complain. 😛

Watching Incited, I realized that Suzu couldn’t quite match up to Ruuko as a character (or Selector), but seeing them both in the same season really confirmed that thought for me. While it was nice to see Suzu so concerned about Chinatsu regaining her lost memories, Suzu didn’t really contribute much beyond that. Chinatsu contributed even less to the story, and despite my inkling that she might’ve played an important part in the story, that didn’t end up being the case at all. I thought even Hanna ended up being involved in the battles more than Suzu and Chinatsu, so I don’t think the Lostorage girls fared too well overall.

At least Suzu and Chinatsu share some sweet moments and add to the modest levels of subtext. Their relationship has to be what yuri fans can look forward to the most from this season, but there’s also Kiyoi and her original Selector-turned-friend, Amika. Amika hardly plays a role during the season, and Kiyoi is usually busy trying to find out how to end the battles, so that’s a bummer. Of course, there’s Ruuko x Tama, though, with so many characters to involve, they don’t get as much play as WIXOSS fans were used to. Overall, I was a bit disappointed with this season’s yuri content, but it’s not like there was ever a ton of yuri in previous seasons.

As for the main antagonists, I was pretty underwhelmed. It doesn’t matter if we’re talking about Eternal, Carnival, or Layla, I didn’t care all that much about any of them. For most of the season, Eternal works behind the scenes and doesn’t have a physical form, so it was practically impossible for me to care very much about her. Even during the final episodes, I was left unfulfilled at the idea of her being the main antagonist. I wasn’t the biggest fan of Mayu, and Eternal invoked the same sense of indifference from me.

Speaking of mediocre villains, I thought that Kou was a pretty lousy one during Incited, and while Carnival has to be considered an improvement over him, she’s just too much of a cliché villain that’s only in it to see the other girls suffer. As for Layla, I didn’t even remember or care about Kaede, and Layla’s yet another sadistic character in a series that’s full of them. If we’re talking about sadistic characters, I think she paled in comparison to Aki-Lucky, and no matter how hard the season pushed Layla, I wasn’t really buying what they were selling. But at least we got more Aki-Lucky, who I think is probably one of the best characters in the entire series. I honestly would’ve much rather have seen her as a main antagonist instead of Layla.

Overall, I can’t help but feel like involving so many of the previous characters didn’t work out as well as I had hoped for. Apart from Kiyoi, I’m not sure any of the returning characters came off as well as they did in their respective season(s), and I don’t think the main antagonists were as interesting or entertaining as the ones from earlier in the series. In addition, with so many characters and an emphasis on darkness and despair, the yuri is less than I had hoped for, so those of you hoping for a whole lot of Ruuko x Tama and Suzu x Chinatsu moments might be a little disappointed.

In terms of both animation and sound, the new season is more of the same, but that’s not a bad thing, as the Selector battles have always been heavy on nice effects and the music often has an electronic vibe that never ceases to up the intensity of the battles. It was a little weird for me to see Ruuko and the other Selector girls have normal-looking noses this time around, but flashbacks to the older seasons served to remind me how awkward they looked. So like the previous WIXOSS anime, the battles do look and sound nice, and the music and visuals do a good job of invoking a pretty gloomy atmosphere, but I guess that’s par for the course for this series. In short, the production values are fine but not great or anything.

At the end of the day, if you consider yourself a fan of the WIXOSS anime, you’ll probably end up enjoying this season, yet the one-note main villians and unclear rules that govern the world took away some of my enjoyment. At this point, I’ve personally gotten tired of all the doom and gloom of this series, but if there’s money to be made, there’ll probably be more WIXOSS anime to come…