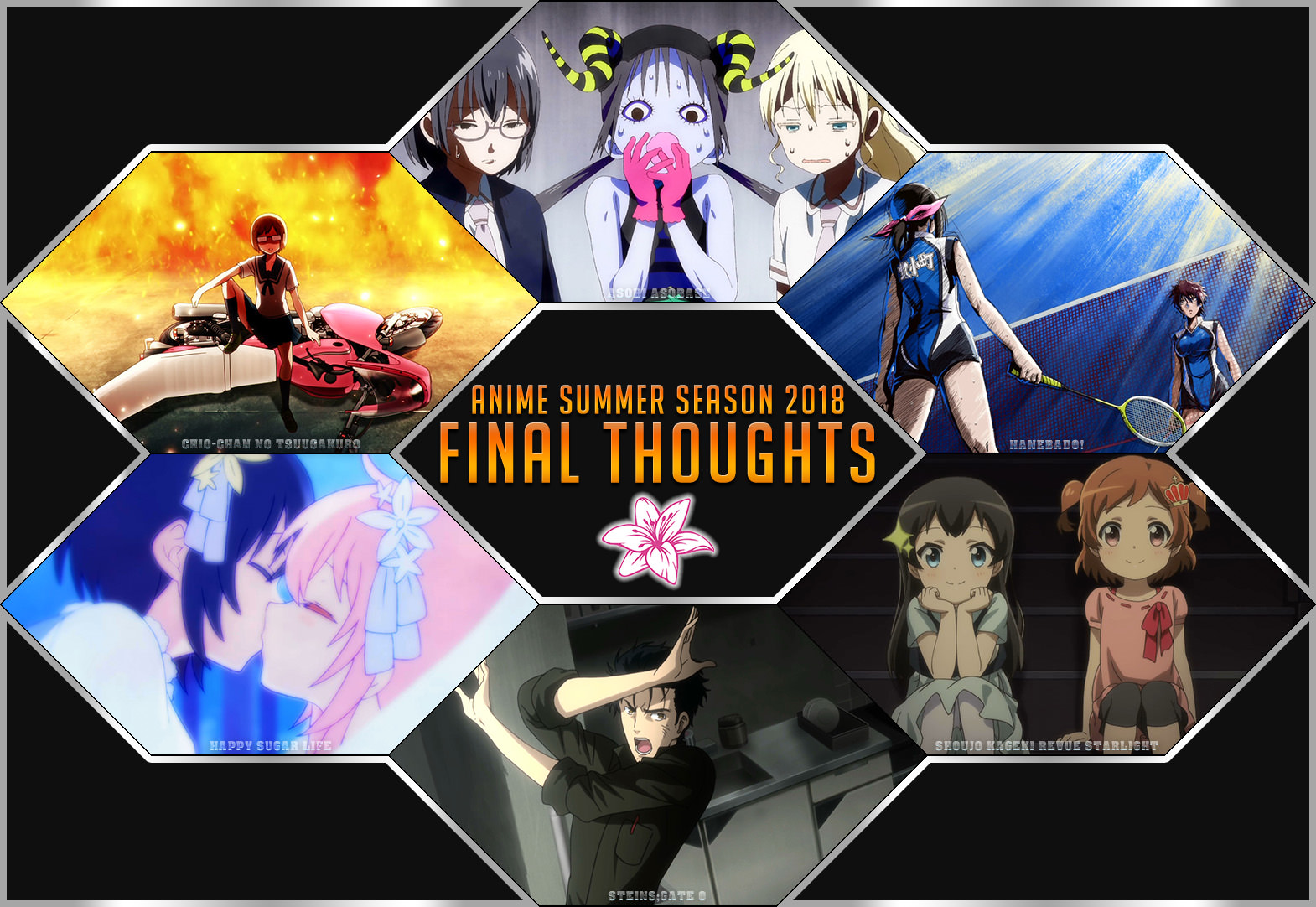 It’s that time of the year again, so enjoy our Final Thoughts of the summer anime season that just came to an end~ 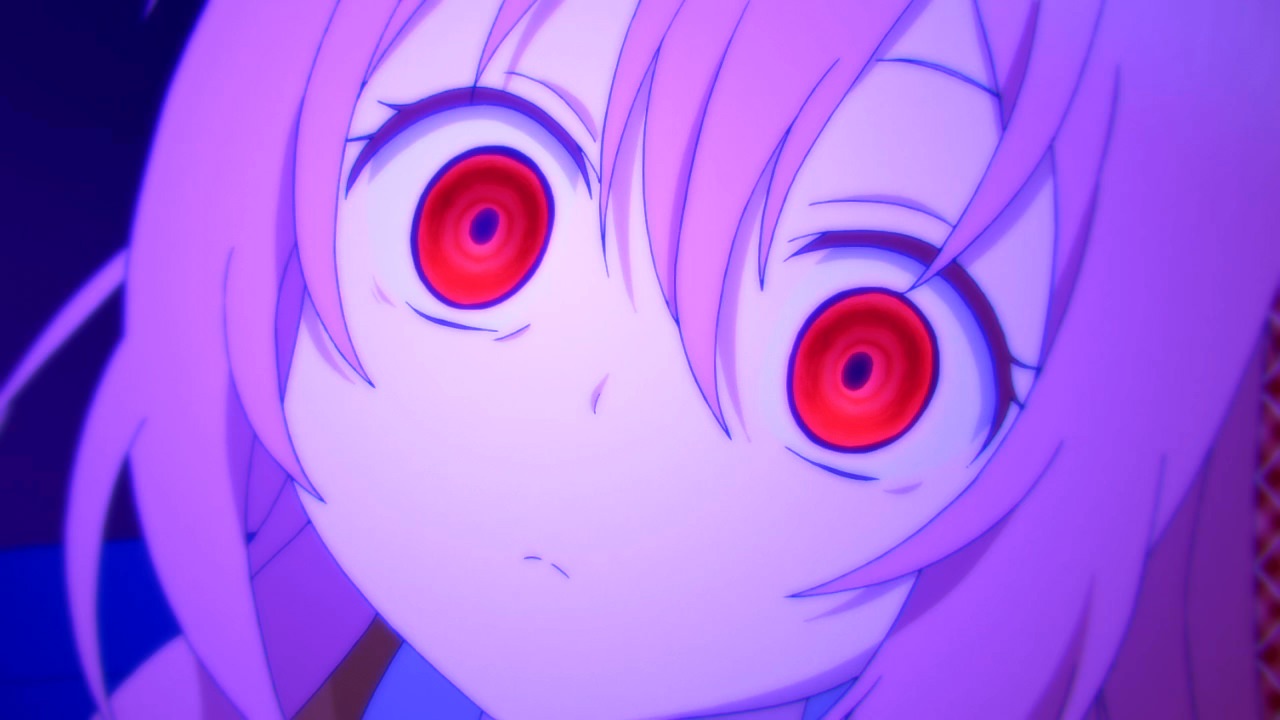 Trust me on this one, don’t go into this only for the yuri. If an age gap of about ten years—with the younger one not even being old enough to understand how to use a vacuum cleaner—doesn’t already scare you away, maybe the yandere part will. The “yuri” aside, the horror, or rather, psychological aspects of this show made it hard for me to watch more than one episode at a time.

Happy Sugar Life constantly hits you with more twisted people, all with their own understanding of what makes life bearable, and all in one way or another seemingly just tools to make Satou and so many other people they encounter suffer beyond what they can take. Now, add Satou to this equation, with her own twisted personality, and you’re constantly hit with both drama and trauma, to the point that you get paranoid that every new character that gets introduced must be crazy in some way. And you wouldn’t even be wrong about that!

So, yeah, if you’re into these dark and twisted psychological kind of shows, this is surely something you will enjoy. However, personally, as much as I can enjoy shows like this, Happy Sugar Life might have crossed a certain line a few times too much, and at some point, some characters rather came off as laughable and ridiculous instead of scary and dangerous. Also, the yuri part was just not my cup of tea. 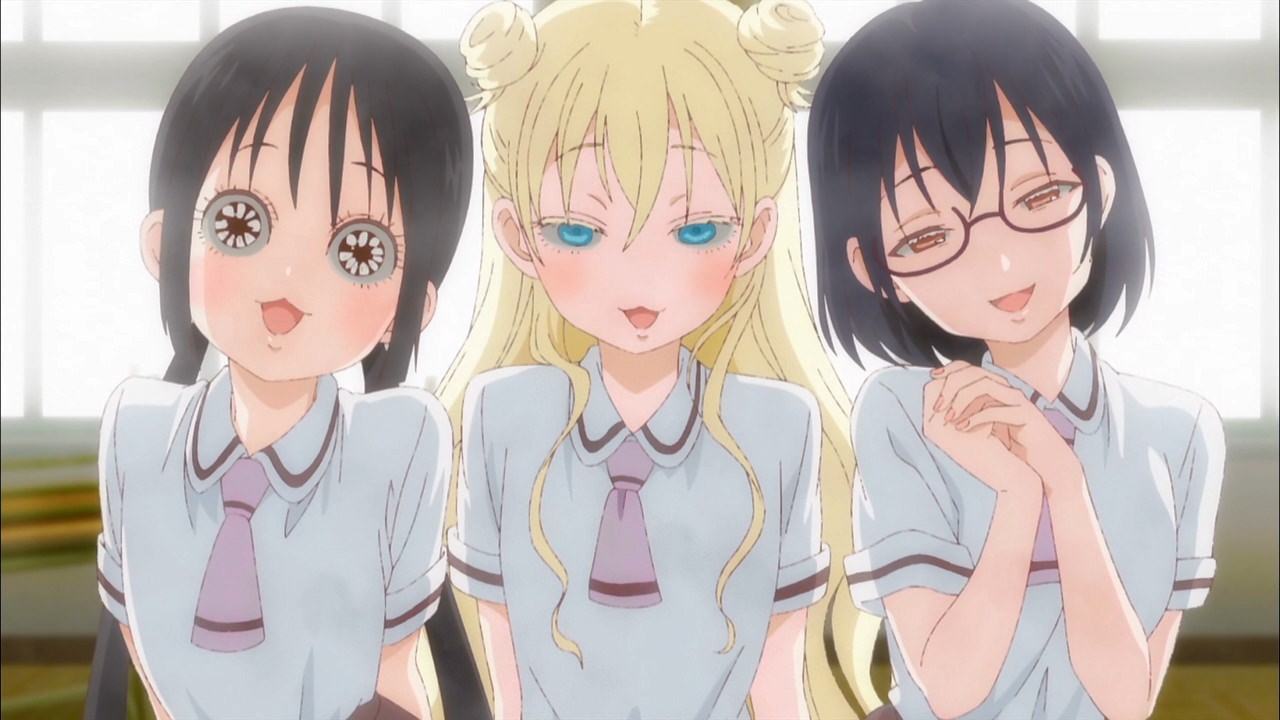 Just when you think that anime can’t possibly get any dumber, along comes Asobi Asobase… and it totally redeems the industry! Okay, that’s not true at all, because this is pretty much what happens when you cross something as memetastic as Pop Team Epic with cute girls doing cute things. But that’s not actually a bad thing! Cute girls doing stupid things is a subgenre that I never knew that I loved, and it’s all thanks to this anime.

After the surprise factor of the really great first episode wore off, Asobi Asobase struggled to once again reach those dizzying heights, but it was still as entertaining a comedy as I’ve seen all year. A lot of that can be attributed to the three main characters, Hanako, Kasumi, and Olivia. All three are hilarious in their own way, but Hanako—and her voice actress—deserves some kind of award for her performance. Our end-of-year awards aren’t too far away, so she just might get one. The chemistry between the girls was superb, and it was always funny how they manage to be each others best friends and worst enemies.

The delivery of the jokes and gags were on-point, even if some were less funny than others. The first visual for this anime made me think that we could possibly be seeing some yuri in this show, and despite this turning out to be a very different show with minimal yuri (in one of the segments, Kasumi inadvertently “opens a new door” for another girl), I’m totally okay with that, because the final product probably ended up being more entertaining than my original vision for this show would’ve been. Between this and the next anime on the list, I’d have to give the edge to this one, so if you only willing to watch one absurd comedy this season, Asobi Asobase would be my pick. 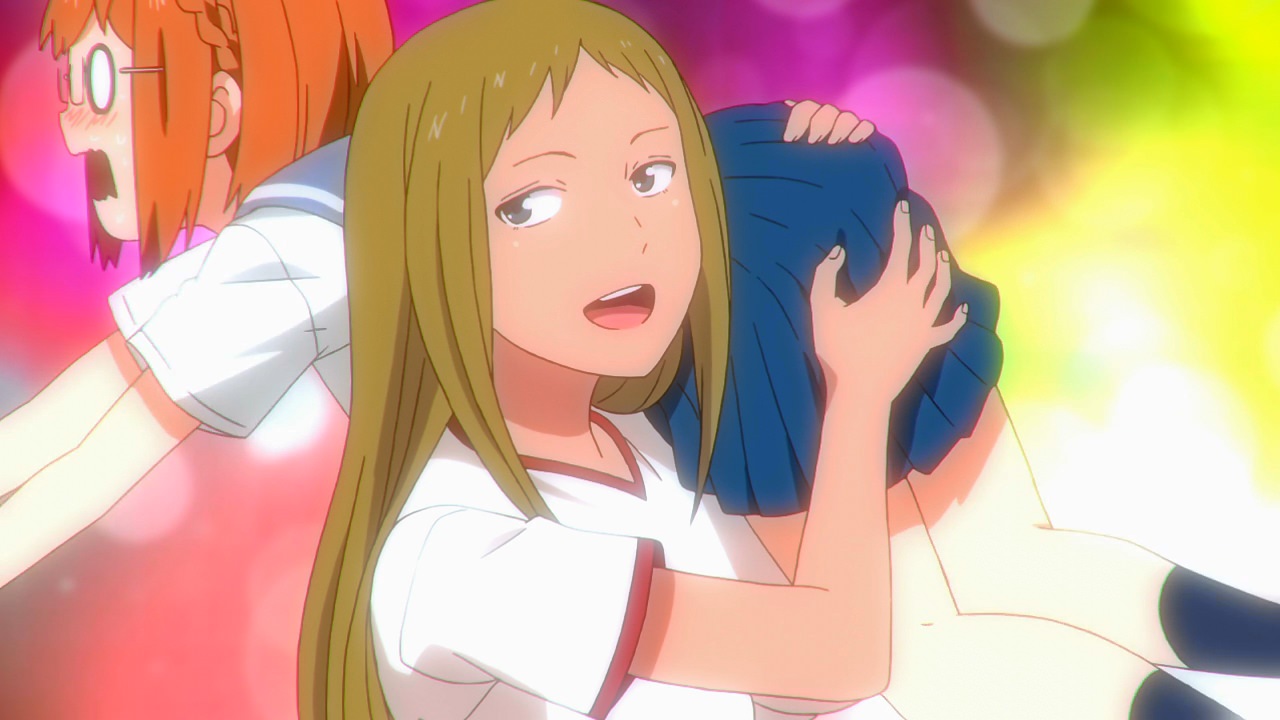 As we noted in our First Impressions post, Chio-chan was a show that had an incredibly simple premise (the crazy situations one girl encounters on her way to school), but despite my initial fears, I don’t think it turned out to be that repetitive. With two or three segments per episode, some segments were definitely better than others, but there were definitely a few duds along the way. Still, I think there were more hits than misses, so I can’t complain too much.

In many ways, this was a lot like Asobi Asobase. Both were random and ridiculous, so having both air in the same season was a treat for fans of off-the-wall comedy. In one of the sketches, there’s a girl who uses some obscure Indian sport as an excuse to get a little touchy-feely with other girls. In terms of yuri, it’s not very much, but a pervy lesbian character is actually a lot more than I expected from this show. Needless to say, the segments that involved her were some of the best this anime had to offer, but others like Chio’s “Bloody Butterfly” misunderstanding were great as well.

All in all, this was a fun time-waster that was easy to get into and funny enough (at times) to overlook some of the less funny moments. Chio turned out to be pretty entertaining protagonist, and being someone who’s a little into games myself, I liked the little nods to a few gaming franchises and gaming culture in general. An anime like this is an acquired taste that not everyone would like, but I wasn’t expecting anything great, so I can say that my reasonable expectations were met. 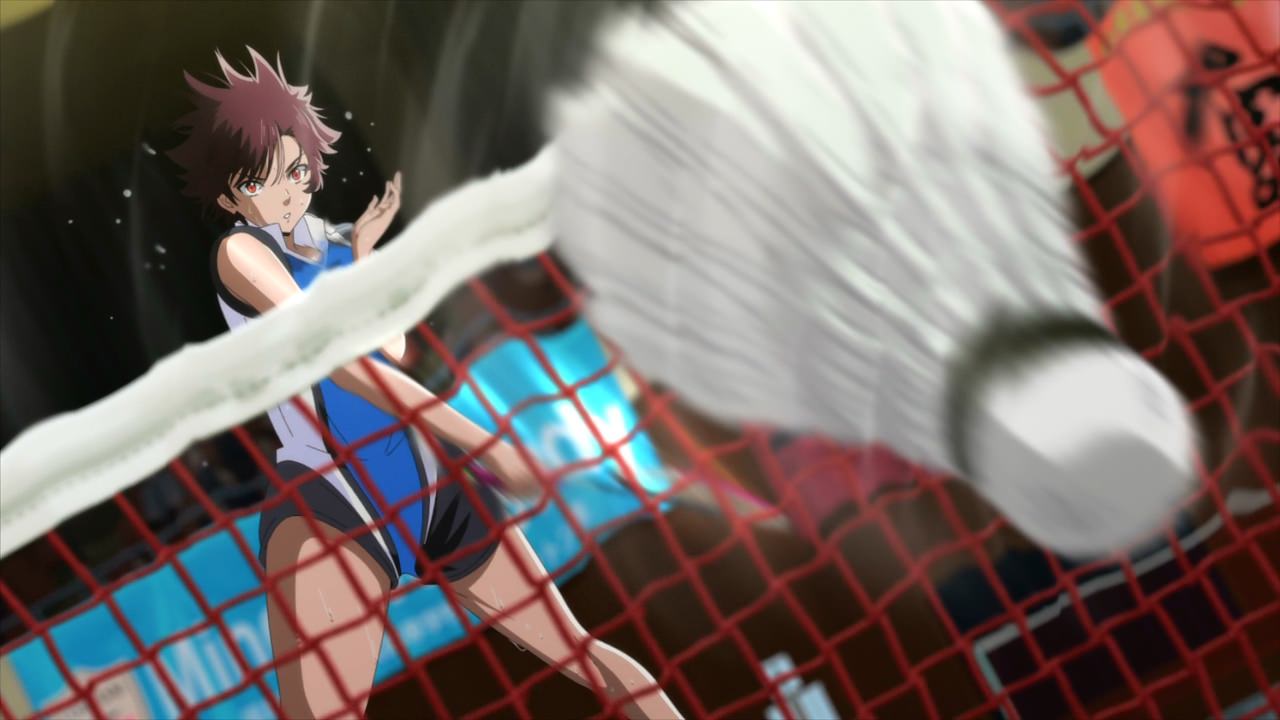 I wouldn’t classify badminton as the most exciting sport ever, but like mahjong before it, the sport appears as exciting as it’s ever going to seem, and it’s all thanks to Hanebado!. But for those of you that were hopeful that we might see some yuri from this anime, I’m sorry to say that you’re going to be disappointed. More than your typical sports anime that often appear cheerful and uplifting, Hanebado! instead pours on the melodrama, and I can imagine some viewers loving it while others will hate the overall seriousness of this show.

The majority of the melodrama comes as a result of some mama drama involving Ayano, whose former professional badminton-playing mother abandoned her at a young age, resulting in psychological scars that still greatly affect Ayano. Early on, it seemed like Ayano’s suffering was pretty cruel, with the worst thing being the introduction of her “adopted sister” that reopens Ayano’s psychological wounds. From that point on, the change in Ayano’s personality made her really unlikable, and I think all along, I was just more of a fan of Nagisa. The third-year was always training so hard, and her dedication and intensity made me a fan of hers. She herself didn’t have the most friendly of personalities, but at least she didn’t develop a bitchy attitude like Ayano. All this talk of Ayano and Nagisa, but even though Riko didn’t go very far in the tournament, but she was still the best girl~

Compared to other sports, I think badminton is pretty straightforward and easy to grasp, so you don’t really have to have any familiarity with it in order to enjoy the matches. In addition to the intensity of the matches, Hanebado! also managed to look really good, and the fluidity of the characters’ movement was pretty impressive. Overall, the melodrama of this anime was a bit too much for my liking, but it was still a pretty enjoyable experience that I’d recommend to fans of sports anime. 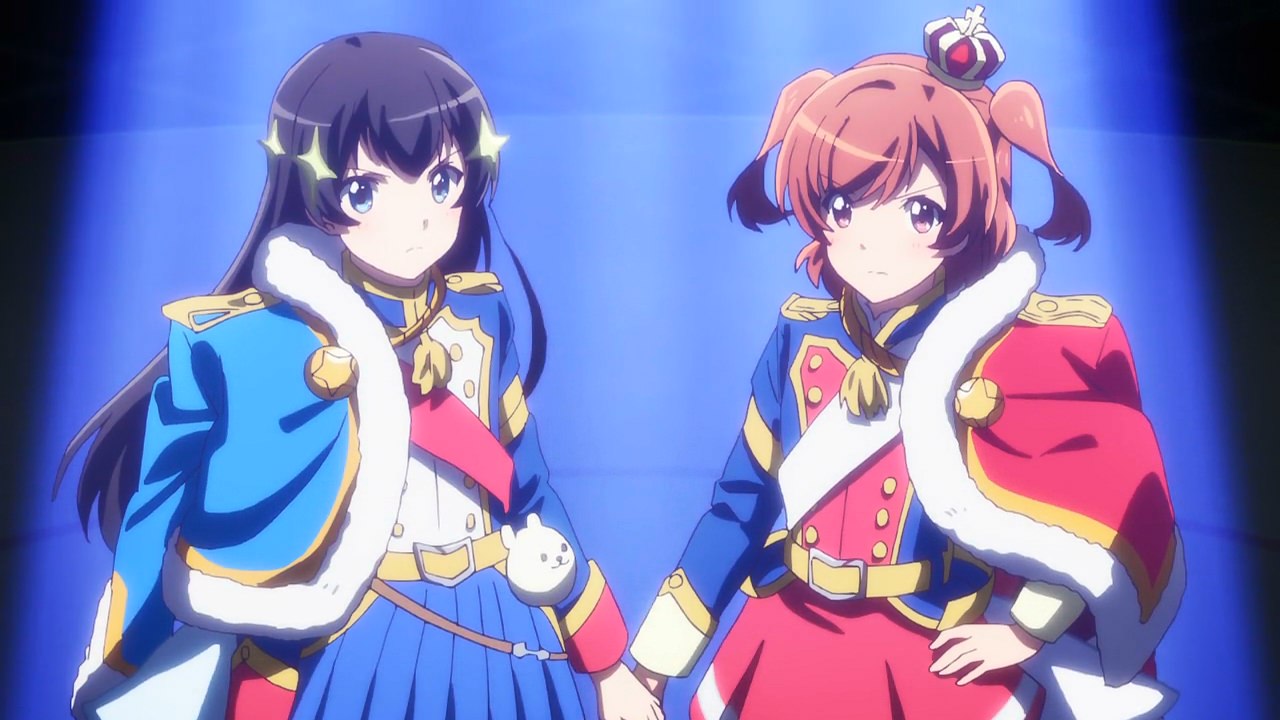 When I watched the first episode of this anime, I was really caught off-guard by the performance at the end of the episode, and it was only after that that I learned about Revue Starlight. This series of tweets explains it far better than I ever could, but for someone like me who’s found your typical music anime like Love Live! and The iDOLM@STER to be not that appealing, this fresh take on the genre was all I needed to buy into what Shoujo☆Kageki Revue Starlight was selling.

Karen was the main character, but am I the only one to find her pretty bland? I don’t know, she’s just so similar to every other average anime protagonist out there. I thought that most of the other girls were more interesting than Karen, but there was a whole lot of shipping going on between many of the girls, and that was pretty awesome. Karen x Hikari is the most obvious pairing, but I think I prefer Karen x Mahiru, and that’s all thanks to Mahiru, who competes with Kaoruko as the most overt yuri character in the show (I’ll say it’s Mahiru). Speaking of Kaoruko, her and Futaba were also a cute couple—and even though these two don’t really get shipped with anyone—I thought that Banana was one of the more enjoyable characters, and Junna, well, she held Position Zero in my heart~

In-between the Starlight auditions, this anime does strongly resemble many other music anime out there, and those everyday scenes simply weren’t as entertaining to me. However, once the girls take center stage, everything seems to kick up another notch, be it the overall excitement level or the animation quality (the “fight” choreography/cinematography is great btw). Although Shoujo☆Kageki Revue Starlight shares a lot in common with the Love Live!‘s and The iDOLM@STER‘s of the anime world, it’s the surreal differences that really made this enjoyable for me. And there’s enough yuri in this anime to warrant a review, so look for that in the near future. 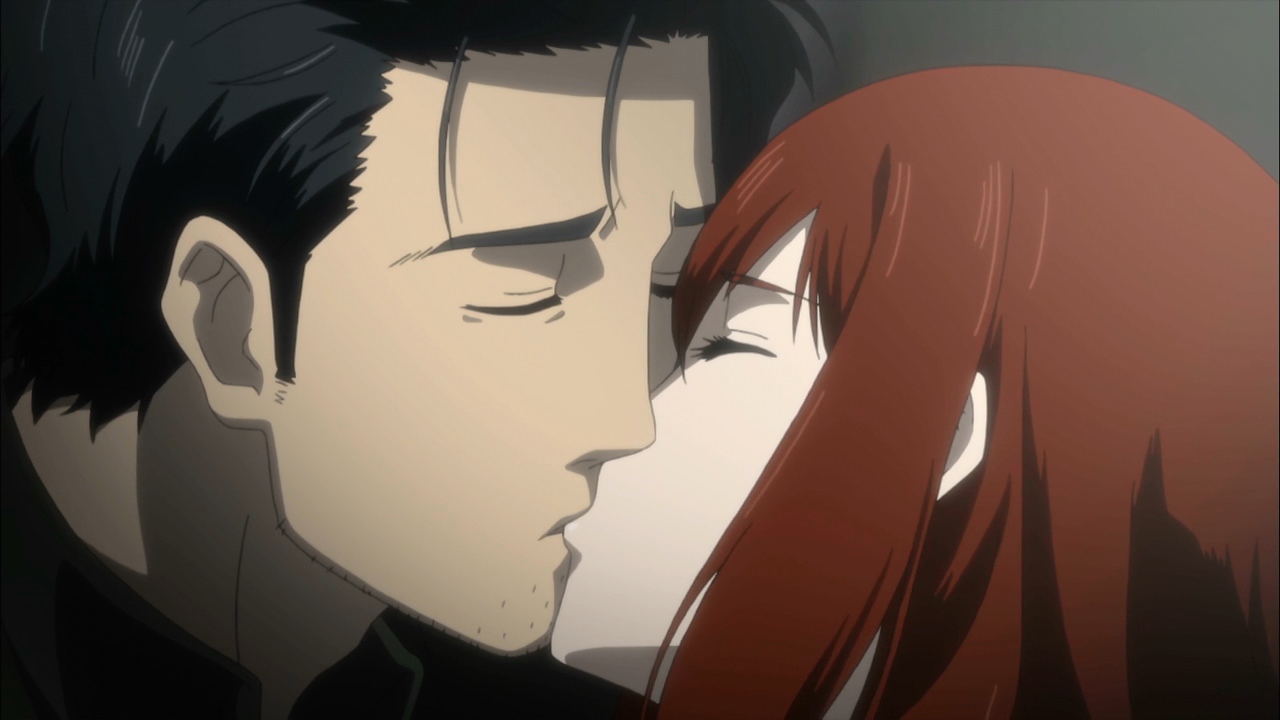 How do you follow-up one of the most revered anime of all-time? That was the issue faced by the creators of Steins;Gate 0, and for as much praise as the franchise has received, I feel like this midquel ultimately disappointed me. It’s not that it was bad—as it certainly wasn’t—it’s just that it wasn’t as great as I was hoping it would be. The biggest issue I had with this new season was the story, which had even more pacing issues than the original Steins;Gate, and for far too long, it seemed that too much time was devoted to inane story elements that could’ve been completed in a fraction of the time. For a good portion of the season, every step forward that the story took, it was followed by a step sideways, and it was so frustrating to watch.

On the flip side, all of the nostalgia from seeing these characters again was really great. The world line may have changed, yet many of the characters have remained the same. Okabe has had an especially tough time dealing with Kurisu’s death, and he spends a lot of this season moping and living in fear that the actions of him and those around him could result in the loss of people he cares about. So imagine my delight when Okabe once again channeled the mad scientist Hououin Kyouma. For me, it was right up there with the Kurisu reunion as the best moment that S;G 0 had to offer. New characters like Maho were a welcome addition to the cast, and even though Amadeus can’t possibly compare to the real Kurisu, it’s the next best thing, and its squabbles with Okabe brought back a lot of pleasant memories. Mayuri even had some things to do this season besides dying over and over again, so that was nice to see as well.

With how the story was dragged out, it might’ve been possible for Steins;Gate 0 to consist of only twelve or thirteen episodes and still tell its story in full. For all this complaining I’m doing, the anime still got a really good rating from me (I rounded up to 8.5), but the Steins;Gate name brings with it very high expectations, and for as good as this new season was, I feel like it could’ve been better.