It’s that time of the year again, so enjoy our First Impressions of the 2018 fall anime season that just started~ 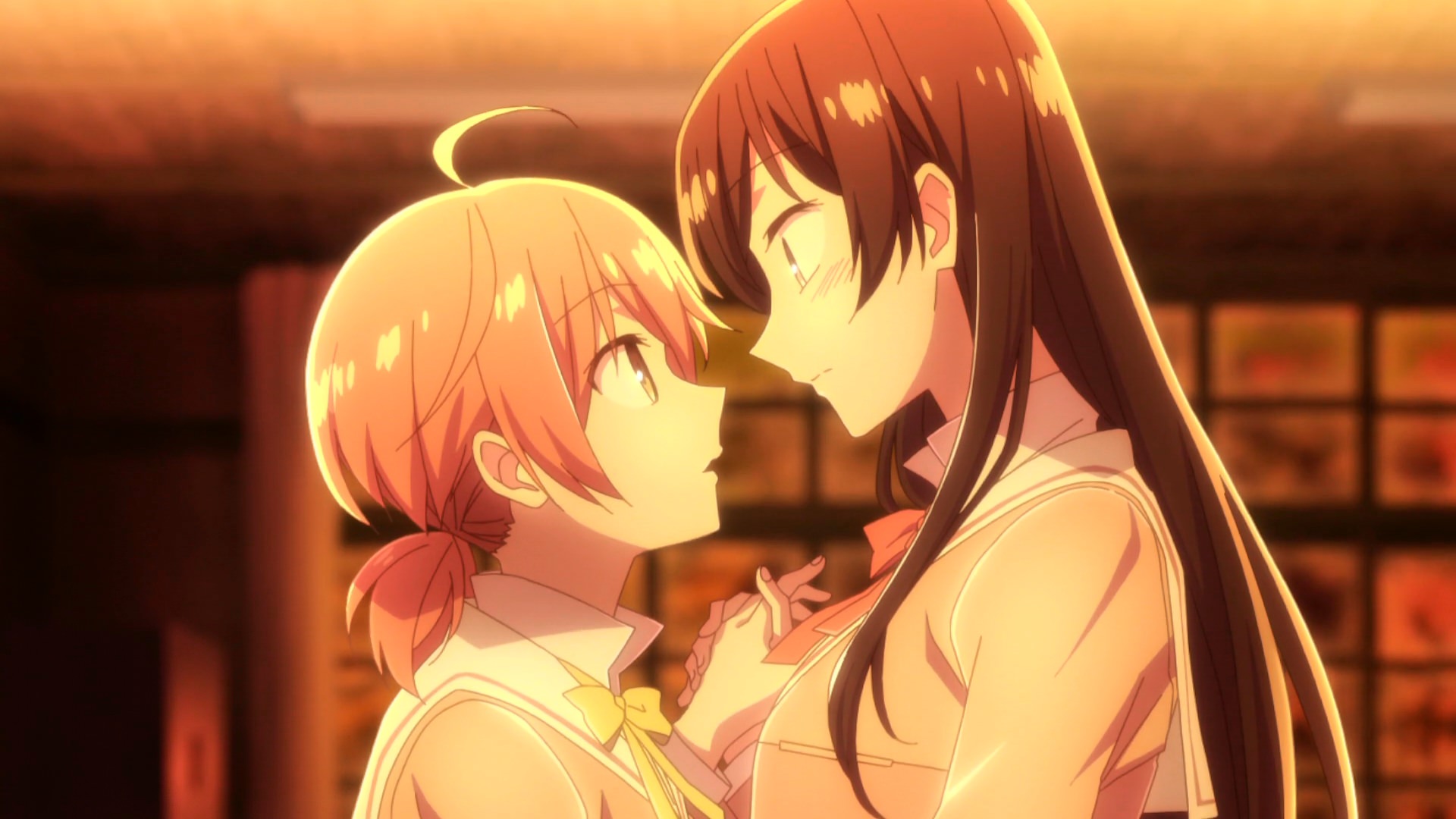 And the second big yuri title hits the screen and the yuri community is going crazy. For good reason though! What we’ve seen so far is some solid animation, some top notch voice acting and an adaptation following its source material so strictly that I just can’t see how this could possibly go wrong. If you wanna read my full first impression, I listed all of my thoughts right in this post.

Ah, it’s been a while since I watched any of the Index/Railgun franchise, and oh man, how much I missed this. It seems from the first episode alone that pretty much every character from the previous seasons will probably appear in this one, as we were already introduced to quite a few of them in the first few minutes (and the opening) alone.

Since it’s been so long, I actually have no idea what happened in the last season, and I was a bit disappointed to see that we didn’t get a quick recap to see where we left off, and there wasn’t much of an introduction at all. It seems we either know about all of it already or just go with the flow and hope it all comes to mind again at some point. I’ll try the latter, of course, since I’m just too lazy of a person. 😛

So needless to say, the first episode was all over the place, especially for those of us who simply don’t remember too much of the previous season(s). On the positive side, however, it at least looks like we immediately get into the new storyline, and I hope it stays that way, unlike how the Railgun side of the franchise used to be more filler than actual storyline. We’ll have to see. 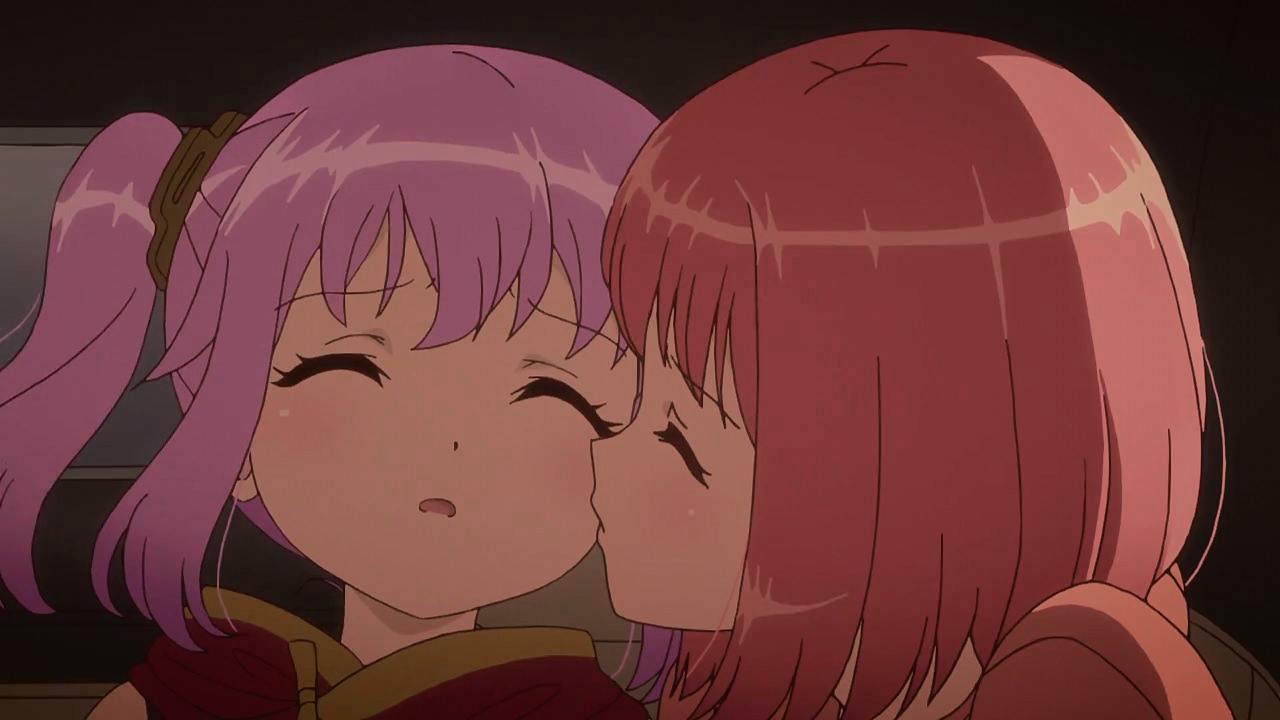 With the resounding success of 2017’s Princess Principal, spies are hot right now, yet I’m still a little surprised that we already have another spy anime to check out. Compared to PriPri, Release the Spyce doesn’t seem as dramatic or well-written, but I thought that the mixture of cute girls doing cute things and action-packed spy shenanigans helped the first episode be fairly entertaining.

This anime seemed like one that could possibly provide us with some yuri, and things looks fairly promising in that regard. That’s all thanks to Momo, an aspiring police officer who’s talents catch the eye of the girls from Tsukikage, an organization that’s been battling evil since the Sengoku period. Momo’s talented tongue (ahem) allows her to gauge a person’s well-being, and in the course of the first episode, she licks one girl on the neck, licks another on the hand, and kisses yet another on the cheek. In addition to that, Momo has also long admired Yuki, a classmate of hers who’s secretly a part of Tsukikage. Yeah, things are looking really positive for yuri fans~

Thanks to the character designs from Namori, I can’t help but see Akarin and Chinatsu when I look at Momo and Fuu, and I kind of like it. The action and animation shouldn’t wow anyone, and those looking for something more serious might be disappointed with Release the Spyce, but if you just want to see cute girls doing cute things while they fight an evil organization, this show has got you covered. 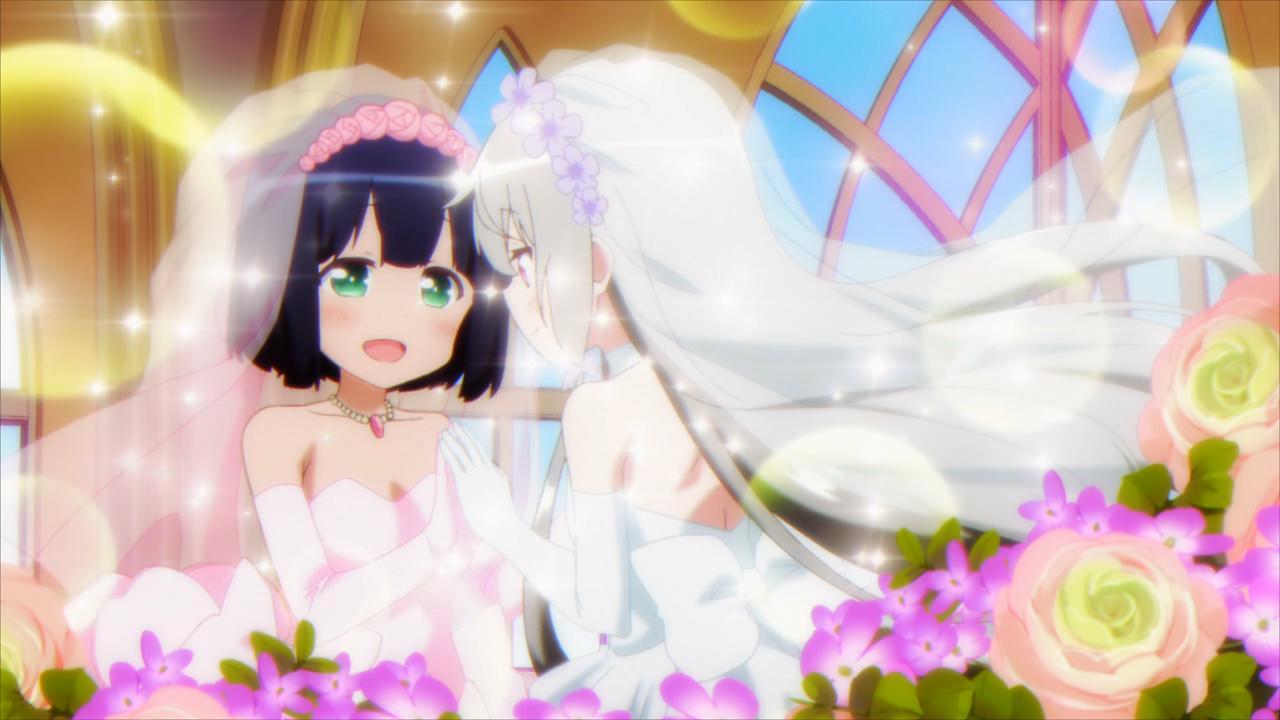 This season has a surprising amount of yuri anime, and Tonari no Kyuuketsuki-san is one of the most fun ones. I don’t know about you, but a yuri anime about a cute vampire who gets befriended by a doll-loving girl sounds pretty good to me, and if the first episode is any indication, this looks like it’s going to be both hella cute and hella gay.

Vampires are generally thought of as bloodthirsty killers, but not Sophie Twilight. She’s just a normal girl who’s minding her own business until she finds Akari lost in the woods. When they arrive back at Sophie’s, it’s apparent that it’s Akari, not Sophie, who’s the unusual one here. It was only one episode, but Akari and Sophie already look like they’ll end up being an adorable pairing, even though it’s mostly Akari (at least for now) that’s responsible for the yuri. More characters will be soon be introduced, but the first episode is almost exclusively about Akari and Sophie, and it’s a great introduction to these two characters.

Aside from the whole vampire thing, this anime doesn’t feel very original, but as long as it’s entertaining, I don’t even care that much. I highly doubt that this slice of life will end up being on the level of some of the heavy hitters in the genre, but it’s cute and amusing, and with all the cute girls doing cute things anime, it’s nice to get another one that yuri fans can rally behind. 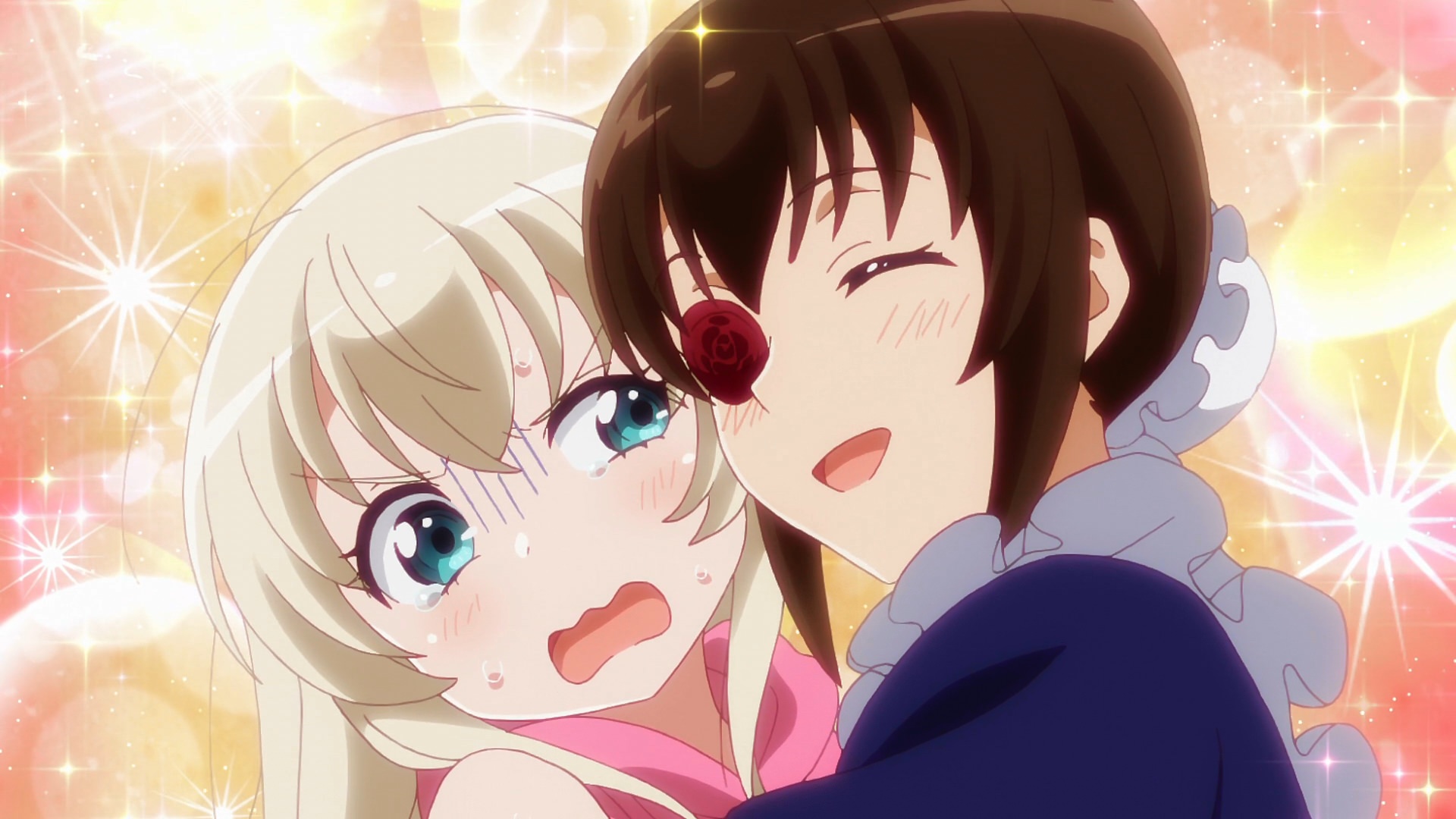 How unexpected. I was so sure this show would turn out bad, given that the content needs to be handled exactly the right way to not come off the wrong kind of weird, the budget for shows like this often end up pretty low and well, the voices need to be on point. Now watching the first episode, I was in fact weirded out, quite a lot actually. I mean, a buff ex pilot dressed as a maid going all crazy and stalking a little kid since she finds her irresistibly cute? Sounds weird and that’s exactly what it is, but it’s the good kind of weird.

During most of the two episodes I watched so far, I get some top notch entertainment, hilarious moments and actually some quite sweet scenes despite the fact that Tsubame is probably a (non-sexual) pedophile. The voices here are brilliantly picked too, not to speak of the animation quality that is surprisingly pleasant as well.

I get that the show is still weird for obvious reasons, but so far, I can’t help but love it! 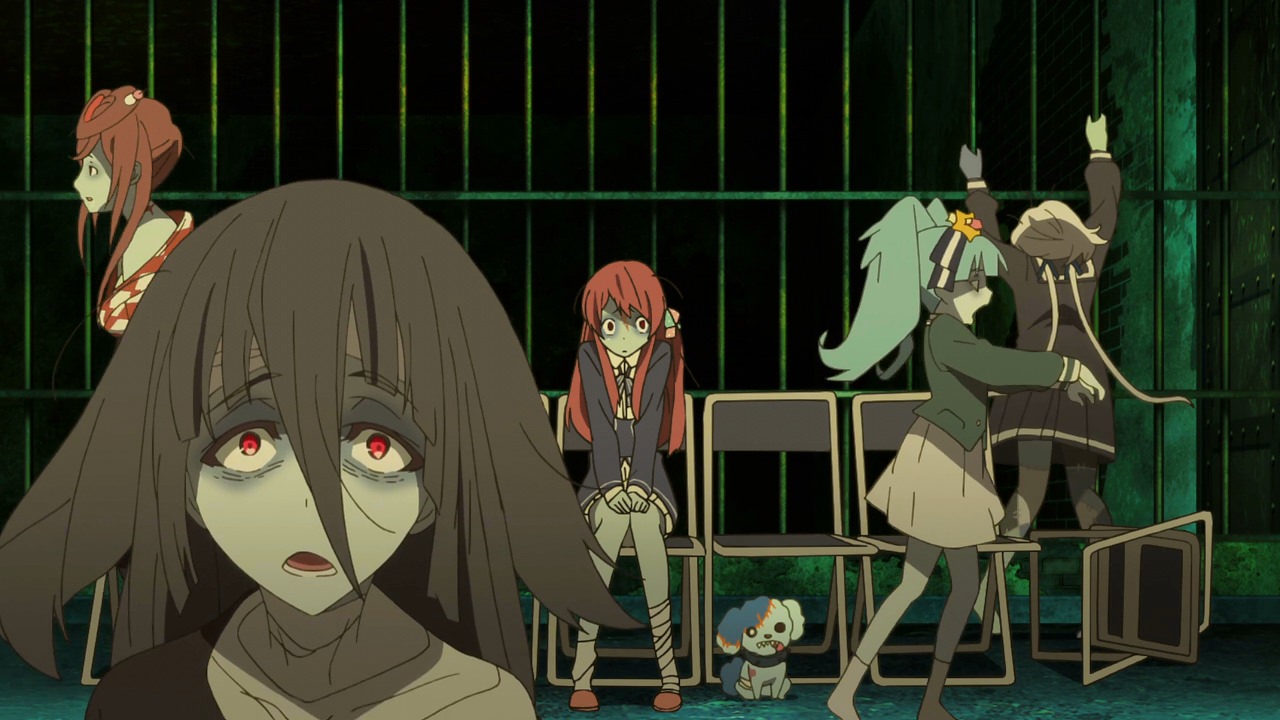 Just in time for Halloween, we have a treat this season. Whether it’s good, old-fashioned zombie-killing action like Highschool of the Dead or more unusual fare, like the strange marriage between zombies and slice of life that is Gakkou Gurashi!, zombie anime is guaranteed good times. Zombie slice of life is cool, but do you know what’s even more entertaining and unexpected than that? Two words, zombie idols. You read that right. 😛

Through the first episode, this anime is every bit as strange as it sounds, but I enjoyed the hell out of it. It seems like this anime doesn’t even try to take itself seriously, and the idea of a troupe of undead girls working together to save an entire prefecture may be the stupidest and most awesome thing I’ve ever heard. Aside from the odd circumstances, what made the first episode even more entertaining was Mamoru Miyano, who plays the girls’ human manager, Koutarou. He’s essentially a one-man show that’s almost worth the price of admission by himself. The main character, Sakura, has no idea what to make of her new life as a zombie, and having someone as eccentric as Koutarou be her guide leads to all sorts of amusing moments that I enjoyed. The two of them already have a lot of funny interactions, and given how over-the-top Koutarou is, I expect a lot more. The other girls didn’t play much of a role in this first episode—since they didn’t “awaken” until after their first performance—so let’s hope that they’re as entertaining as Sakura.

Zombies are people too, and seeing things from their perspective is a fun change of pace that I never knew I always wanted to see. To me, this seems more like a comedy than a horror anime (even though comedy isn’t listed among the genres), and thanks to the Love Live!-meets-Shaun of the Dead vibe, Zombieland Saga seems like it’s destined to be a fun time. If only all idol anime were this original… 😛