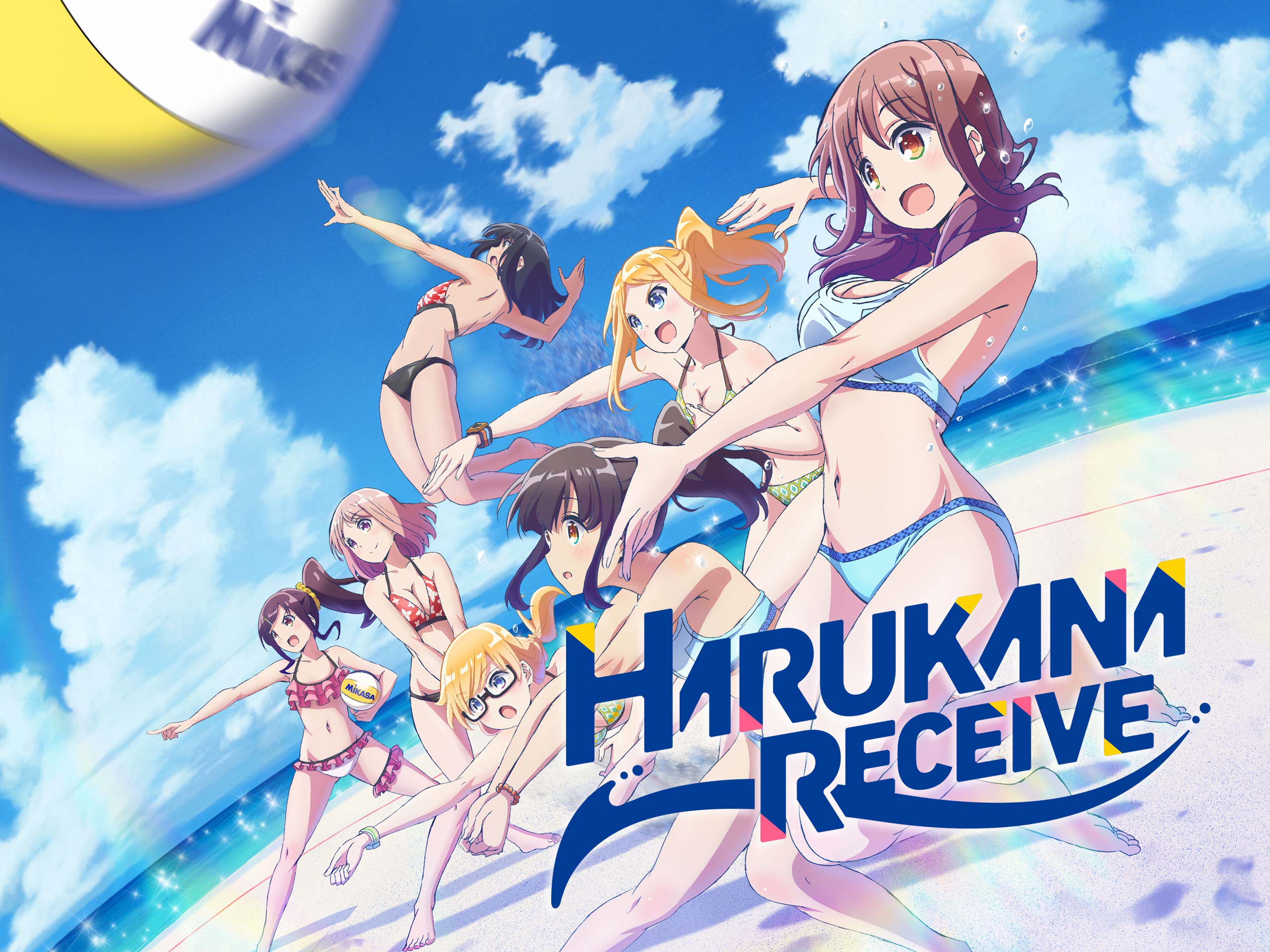 Summer may be over, but let’s remember the nice weather by checking out the anime that epitomizes what summer is all about, Harukana Receive~

Synopsis: The story takes place in Okinawa, where Haruka forms a beach volleyball pair with Kanata. Kanata, who couldn’t handle the pressure put on her by her short height, had given up on beach volleyball already but is convinced by Haruka to step back on the sand once again and aim for the junior tournament.

When I first heard of this anime, what immediately came to mind was Keijo!!!!!!!!. You know, that one “sports” anime where girls try to knock each other off of platforms using only their asses. Yeah, that one. I expected something along the lines of that, so I just dismissed Harukana Receive as nothing more than an excuse to show girls in bikinis, but it’s not just about that. Yes, it does have a TON of fanservice, but it also involves a legitimate sport, and it handles itself with at least some dignity. 😛

Now that we’ve gotten that out of the way, let’s talk about the story, which is pretty much just your typical vanilla sports anime storyline. Person A discovers a sports club, joins said sports club, then proceeds to want to become the best. There really isn’t much more to it than that. I had zero expectations that the story would be anything of note, so I don’t mind all that much. I just wanted the volleyball-playing to be entertaining, and even though I’m content with what was shown, I’m still left wanting a little more. I’ve seen beach volleyball during the Summer Olympics, and it seems pretty exciting, albeit a little repetitive. The same can be said of the volleyball in this anime.

“If it weren’t for the matches in the last several episodes, we probably would’ve seen more of those (yuri moments), but instead, the friendship between all of the girls is on full display.”

Unlike something along the lines of Hanebado! (which really laid the melodrama on thick), this anime lacks a good deal of drama, and that’s something that I kind of missed. I don’t want an insane level of melodrama or anything, I just want to feel some tension, and I didn’t really get that from this show. The qualifiers didn’t feel like a big deal at all, and aside from one forgettable pair, we didn’t really get to know any of the girls’ opponents, so it felt like those other matches were a waste of time. The wait until the matchups that we did want to see felt too long to me, although the girls always practicing together quelled that feeling somewhat. Still, that championship match took way too long. The build-up is something that Hanebado! did really well, and that expected showdown with Narumi & Ayasa? It didn’t happen. Oh well…

The show may have lacked drama, but it had a good sense of humor, and I liked how it didn’t take itself too seriously. It’s also nice how it’s not too heavy-handed, preaching about the virtues of teamwork, friendship, and hard work. So Harukana Receive is an easygoing sports anime that plays it safe from a story perspective and just wants to have some fun in the sun, and I’m cool with that.

Moving on from the underwhelming story, this is a pretty small cast, yet I thought that they acquitted themselves fairly well. Character development isn’t this anime’s forte, but most of the girls have a lot of personality, and they’re still an entertaining bunch.

Haruka and Kanata are your main protagonists, and I thought that both appeared likable and charming, in their own ways. Kanata’s an okay character, but I think Haruka’s colorful personality really makes her stand out in comparison. After Haruka moves in with Kanata and picks up volleyball, they’re basically inseparable, and despite the fact that it was Kanata and Narumi that were often referred to as a couple, Haruka and Kanata have some moments that yuri fans will like. If it weren’t for the matches in the last several episodes, we probably would’ve seen more of those, but instead, the friendship between all of the girls is on full display.

If I had to point out the thing thing I disliked most about this anime, it’s the fact that Narumi and Asaya didn’t play a bigger role. After the first couple of episodes, they’re left with brief cameos for the remainder of the season, and the history between Narumi and Kanata is really interesting, and it could’ve added some extra spice into the mix to have Narumi and her new partner opposite Kanata and her new partner. As it stands, Narumi and Asaya appeared to be almost couple-like, and had they been around more, the yuri score likely would’ve gone up a little more, if their touchy-feeliness is any indication.

While both pairs mentioned above are fine, my vote for best pair is easily the Thomas twins, Claire and Emily. Claire’s a lot like Haruka, but even better, and Emily wears glasses, so she’s obviously the best character in the show. Their very different personalities end up making for some fun moments, and the only thing I didn’t like was how they weren’t the stars of the show. And in case you’re wondering, no, there’s no funny business going on with these two. 😛

Akari was a lot of fun, so I’m a little disappointed that she didn’t play a bigger role either. Since Akari was quite fond of the set of abs on Claire and Emily’s mom, how about the two of them as a pair? Or how about granny turning back the clock, breaking out the one-piece, and partying like it’s 1959? Okay, that’s a bad idea. Nobody wants to see that… 😀

At the end of the day, I liked this cast of characters well enough, and even though it felt like it was counterproductive to have Narumi and Ayasa stay away from the others, the girls that did play big parts did so pretty well. Add in the subtext and you got yourself a gay old time with some pretty entertaining characters.

As for the production values, Harukana Receive doesn’t stand out like another recent sports anime, Hanebado!. That show killed it with how fluid the character movement was during the matches, yet this show was average in most regards. The CG elements (sand, the ball) stood out like a sore thumb, and there were plenty of times where things looked pretty awkward. It was strange to see sand magically pop out of the ball every time it was hit, but it wasn’t too bad, and a nice touch that I noticed was sand sticking to the girls’ bodies. I only noticed it like two times all season, but it was still cool to see.

And as I mentioned earlier, there’s a whole lot of fanservice in this show. You know how a lot of anime have an unnecessary “beach episode”? This anime tops them all by having every episode serve as a beach episode. Busty girls playing beach volleyball in itty bitty bikinis sounds pretty entertaining, and, honestly, that’s arguably the most entertaining reason to watch.

Of course, the music isn’t as entertaining as all of the showing of skin. The upbeat music seems very suitable for all of the beach-faring action, though, the music is a major reason why the matches lack much drama. It’s hardly a dealbreaker or anything, it’s just that I expected a little more.

Overall, Harukana Receive is an okay sports anime, but what’s really gonna garner attention is all of the fanservice, and it certainly helps that there’s a good amount of yuri subtext in this show. If you like volleyball, sports anime in general, or just seeing half-naked girls running around, you might find something to like here. It’s not the deepest show you’ll ever see, but it’s some mindless entertainment that you might find enjoyable.