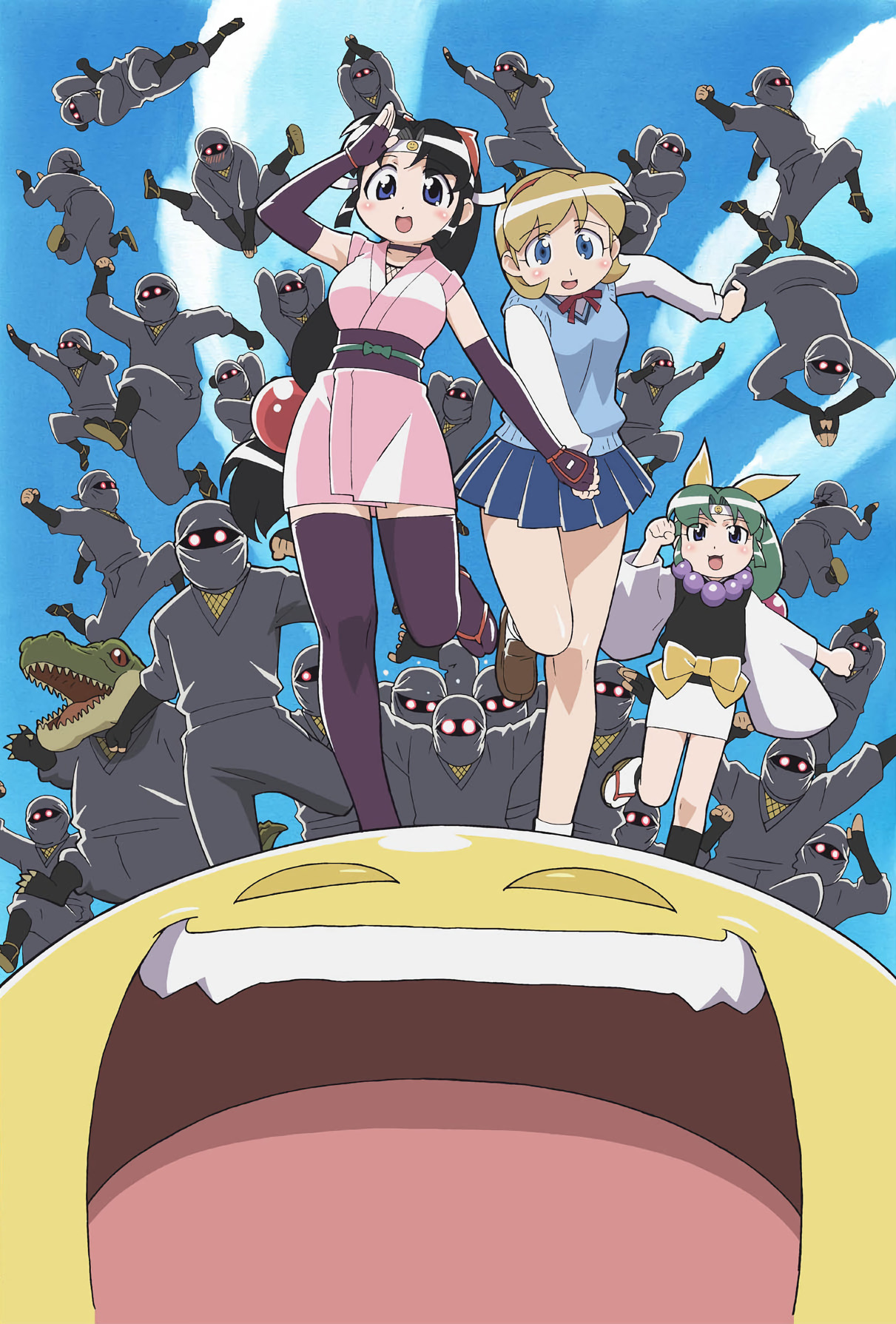 I first learned of this anime while browsing the various yuri clubs on MyAnimeList, and the combination of yuri and ninjas immediately caught my attention. That combination sounded too good to be true, so I wondered what the catch was. Turns out it’s a yellow ball-like fellow that steals the show…

Synopsis: Kaede is a normal school girl who was studying for her exams for school when suddenly she is interrupted by Shinobu, a girl who is a ninja-in-training, attempting to complete her exam. The problem is, in order for her to successfully complete her exam, she must steal one of Kaede’s panties!

In Kaede’s attempt to stop Shinobu from stealing her panties, an unexpected friendship is forged between the two. Kaede soon becomes engrossed in Shinobu’s world, surrounded by partying ninjas and a yellow pac-man like thing by the name of Onsokumaru, who claims to be the master of all ninjas!

There’s no need for me to break out an elaborate explanation of the story, since that synopsis more or less tells the gist of what this anime is all about. Predictably, a parody anime about ninjas doesn’t have much in the way of story, and each of the two segments per episode don’t stray far from the formula of misguided ninjas doing stupid things. Who needs stuff like narrative structure or character development when you’ve got stuff like toilet humor? 😛

The requirements of Shino’s first ninja exam are a good indicator of how absurd the story gets, and the mundane-sounding scenarios that ensue end up being anything but mundane. Ninja Nonsense is largely episodic, and besides the time of the year, the story elements don’t really carry over at all. Things just go from one bizarre situation to another, and this style of comedy is perfect for what this show is trying to accomplish. If you don’t mind lowbrow humor, I think there’s a good chance that you’ll find this anime at least mildly amusing, and say what you will about it being unsophisticated, it’s still dumb fun.

The absurdity extends beyond the story and to the characters, but unlike most anime out there, there are only a handful of characters that play meaningful roles in this show.

“There are some yuri moments sprinkled through the season, but that’s still not enough for my liking, and I was hoping for more than just the old ‘Haha, this girl likes that girl.’ joke.”

The biggest problem I have with the characters is how despite having Shino and Kaede, pretty much every episode really ends up centering around Onsokumaru. He’s the type of character that some people will love while others will loathe, and I constantly went back and forth on which camp I fell in.

On one hand, you can’t deny that the sheer amount of chaos that he creates really gives the show its identity. As much as I liked Shino and Kaede, they’re pretty shallow characters, and even though the same could be said of Onsokumaru, there’s simply never a dull moment when he’s around. On the other hand, his schtick can get old pretty quickly, and after a while, his pervy antics and all the crude humor somewhat loses its charm. I think there’s simply too much of him in this anime, so for those of us just watching for some potential yuri, note that you’re going to see a whole lot of him.

As for Shino and Kaede, I already mentioned that they’re pretty shallow, but they’re still fairly entertaining in their own right. Kaede is your average schoolgirl, and her being thrust into this weird world of ninjas really bring out her best qualities, which nicely compliment the cheerful ditziness of Shino.

Besides her incompetency as a ninja, Shino’s biggest contributions to this anime are the times when it’s obvious that she likes Kaede, however, after the third episode, those moments really dry up, and in a way, the show loses some of its luster. You could say that’s the turning point where Shino and Kaede went from pretty much being the focus of the story, to them being firmly placed in Onsokumaru’s shadow.

Shinobu’s little sister, Miyabi, occasionally makes an appearance, and her main role consists of keeping Onsokumaru in check. That’s where most of her appeal comes from, and the rivalry between the two of them was pretty fun to watch. She can be pretty annoying herself, yet it pales in comparison to Onsokumaru, so I didn’t really mind her. And then there are the ninjas, who all look the same and act the same, and worst of all, they usually follow Onsokumaru’s lead and run around doing all sorts of crazy things. Most if not all of them have no names or faces, but they have a surprising amount of personality, and to me at least, they didn’t come across as too annoying, unlike their master. There’s even a talking crocodile that makes appearances in this anime, and that just goes to show you how strange things get.

Overall, this turned in to the Onsokumaru show, and how you view him will determine whether you’ll find that to be a good thing or a bad thing. The other characters have their moments, but it’s not long before he’s back in the center of it all and hogging the spotlight. There are some yuri moments sprinkled through the season, but that’s still not enough for my liking, and I was hoping for more than just the old “Haha, this girl likes that girl.” joke.

When it come to the animation, despite what the genre tag might lead you to believe, martial arts don’t actually play a large part in this anime, so those hoping for some fight scenes will surely be disappointed. The overall look of the show is very pedestrian, yet there are some moments where things get a little more stylish and exaggerated, often as the result of some weird shenanigans that Onso and the ninjas are up to.

As for the sound, the show makes a concerted effort to occasionally mimic the style of traditional Japanese music—to really play up the ninja factor—and I thought it worked out pretty well. Aside from that, the music didn’t stand out all that much, except for the fun ED that I liked. It’s a travesty that Carl Douglas’ 1974 smash hit, Kung Fu Fighting wasn’t licensed for this anime, because if it had been, that alone would’ve made me give it a 10. Okay, maybe not, but it would’ve been great.

At the end of the day, Ninja Nonsense is exactly that: nonsense. It’s an anime that’s a fun, little time-waster, but I’d imagine its brand of slapstick comedy could get repetitive for some people. For me, Onsokumaru’s antics occasionally did get old, yet the comedy was entertaining enough that I could overlook that and appreciate it for the mindless entertainment that it is. 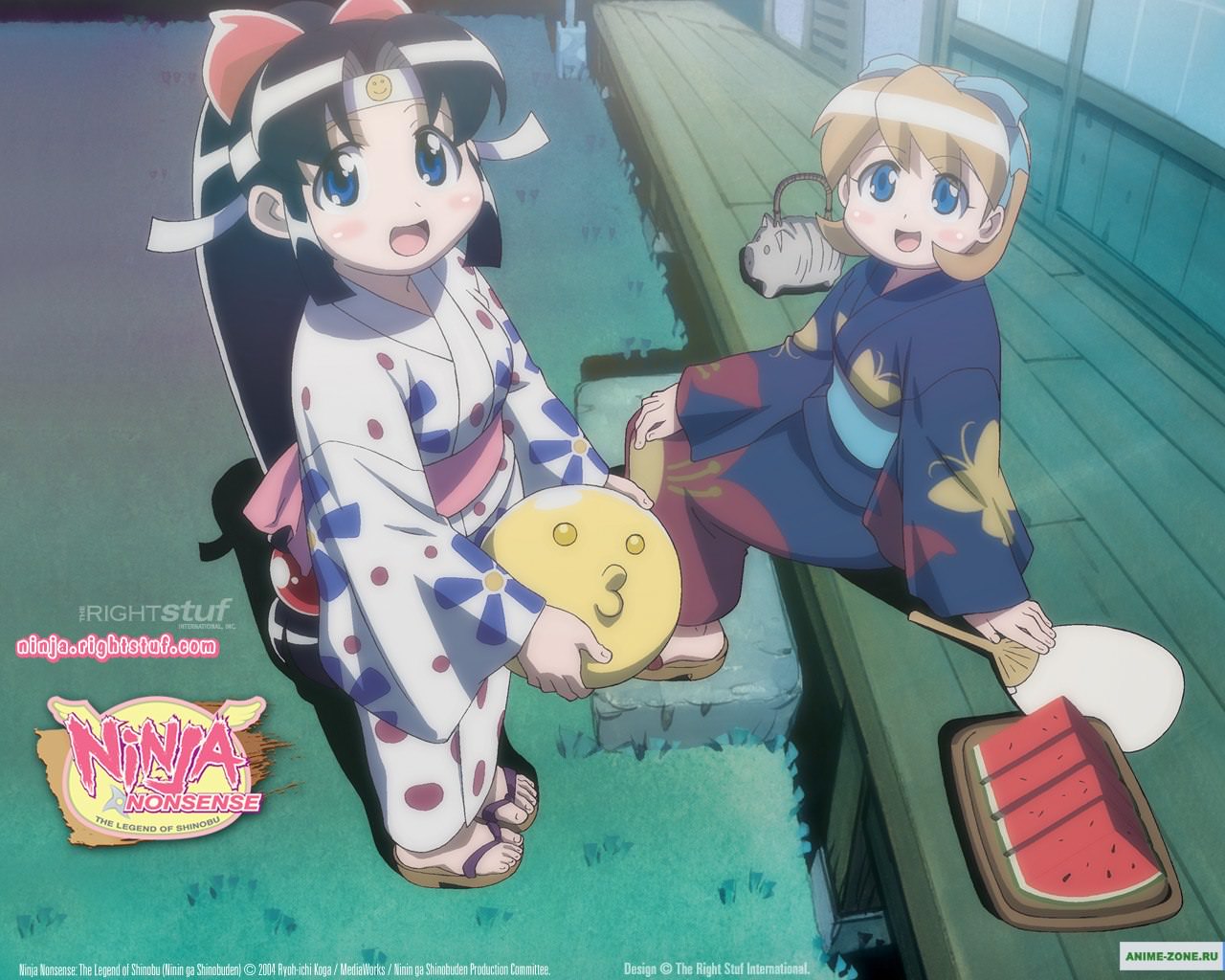