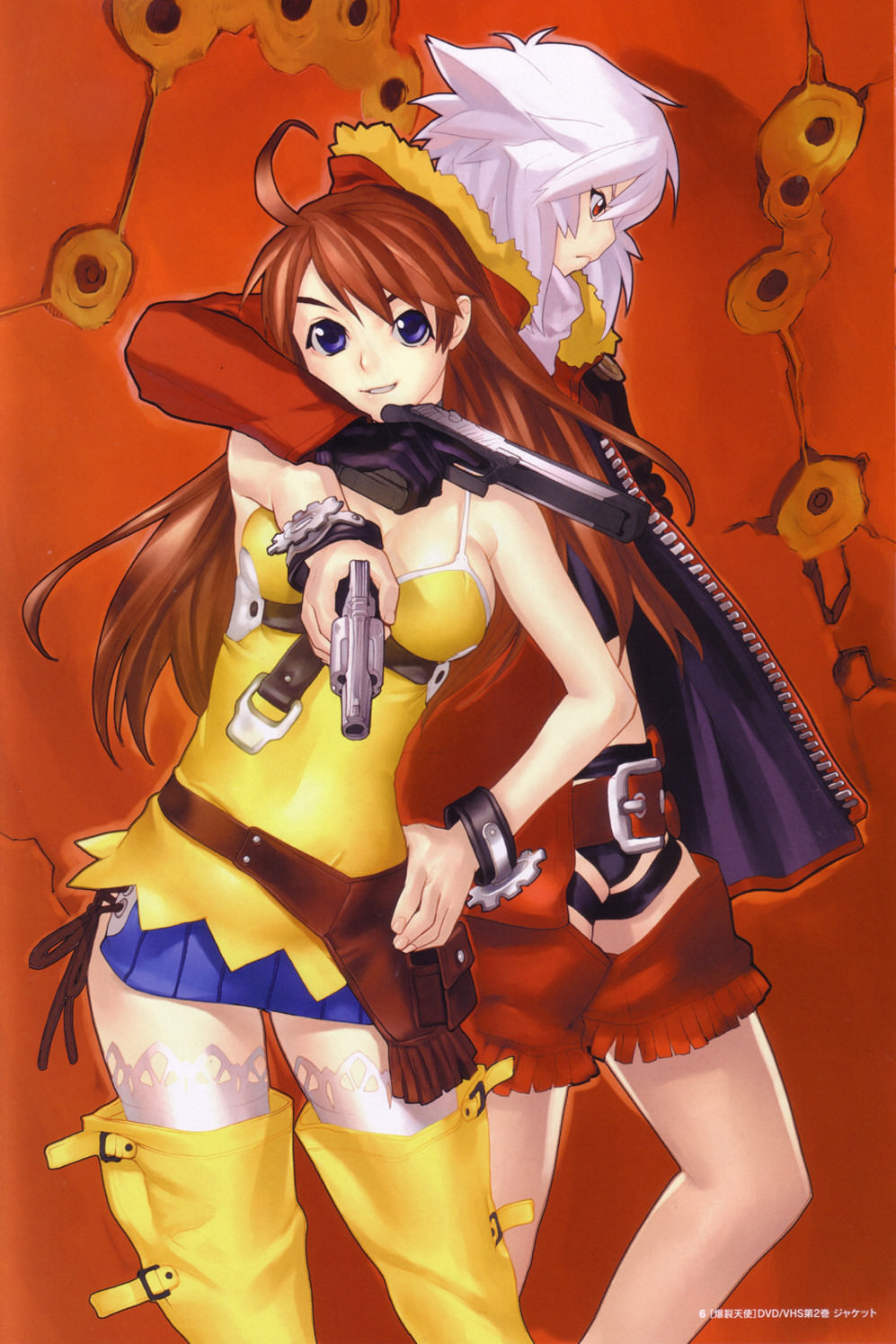 Lost in the buzz surrounding the Bee Train girls with guns trilogy was Bakuretsu Tenshi, which has something that the Bee Train trilogy doesn’t have… mecha. Does that make it better? The short answer is no. 😛

Synopsis: In Japan’s not-too-distant future, crime has become so common that the government has legalized firearms for citizens to use in self-defence. To combat this new wave of wrongdoing, the Recently Armed Police of Tokyo was established in hopes of hunting down criminals with lethal force.

Kyouhei Tachibana is a gifted culinary student who dreams of saving up enough money to become a pastry chef in France. When four young mercenaries ask him to be their cook, he’s forced into making a tough choice. As Jo, Meg, Sei, and Amy take on the bloodiest jobs in the chaotic city of Tokyo, Kyouhei accepts an imminent descent into the world of crime—and he’ll do a lot more than just cooking!

Alright, Bakuretsu Tenshi is a two-cour anime, and I don’t know about you, but I expect a little more—story-wise—from two-cour anime, and this anime’s story was a big disappointment for me. The biggest issue I had with the story was how it just didn’t seem to be building towards anything. Up until the final three episodes or so, the episodes often seemed like little more than random missions, and they simply don’t feel as interconnected as they should. Seemingly, the only thing connecting the various incidents that the girls have to diffuse is the presence of genetic engineering, but aside from a man-made monster, the lack of a dedicated antagonist really hurts.

Early on, we’re introduced to RAPT, an organization that’s basically responsible for cleaning up the mess that has become Tokyo. While a bit of an authoritarian government, they’re not explicitly presented as the villains, so these incidents involving the creatures appear to be perpetrated by mysterious individuals. There’s no cackling madman waving his fist when one of these creatures gets killed, it’s just on to the next episode. Rinse, wash, repeat. Eventually, the truth does come into focus, but at that point, we’re already approaching the end, and there still isn’t a competent main antagonist in sight, just generic and disposable evil guys in suits. Urgh…

“As for how yuri ties into this anime, most of the cute Jo x Meg moments happen in the final third of the season, with my personal highlight being the kiss on the cheek that Meg gave to Jo in the final episode.”

If you can pull the wool over your own eyes and view each episode as a stand-alone story, you might find that things aren’t that bad. The episodes are at least somewhat entertaining, and there are a few mini arcs that aren’t that bad either. The episodes often deliver the action that people are probably tuning in for, even if the stories are usually very basic and straightforward. In the second half of the season, we got some much-needed backstory on Jo and Meg, and Sei gets her own episode that shines some light on her past. Though, up until those points, the main characters are mostly mysteries and not fleshed out at all.

Given my complaints, it might be hard to believe that there are some positives here, but there are. The action itself is very nice, I think the main setting of Bakuretsu Tenshi (Tokyo) has more life and personality than the settings in most other girls with guns anime, and even though the story isn’t up to snuff, there’s still some entertaining sci-fi elements to be found. All in all, the story doesn’t gel as well as it could have, and that’s a shame, because it feels like there’s a lot of wasted potential here.

Moving on to the characters, I was under the impression that all four of the girls would play a major part in all of the missions, but it was one in particular that was front and center on nearly all of them, and she ended up stealing the show. 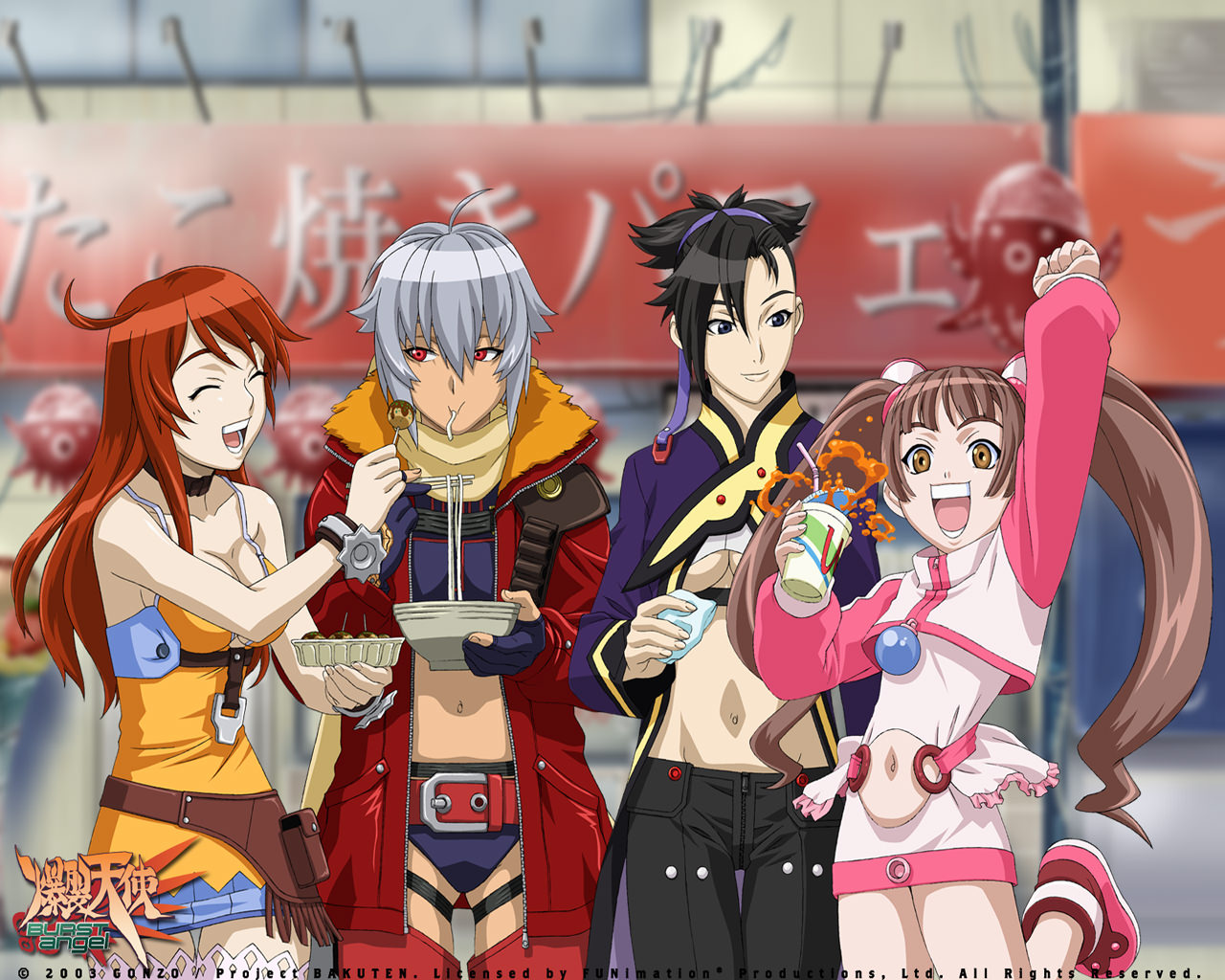 Of course, I’m talking about Jo, the silver-haired mercenary that reminded me a lot of another star from a girls with guns anime, Canaan. I know this aired before Canaan, but the similarities between both leading women are eerie, and I’d go as far as to say that I liked Jo more. On a mission, she’s all business, but during downtime, she just hangs out on the trailer and watches movies, and what’s not to like about a girl like that?

While Meg certainly isn’t the badass that Jo is, she usually serves as Jo’s partner in crime, but she usually ends up getting captured. That’s alright, however, since that just means Jo gets a chance to kick some ass and rescue her, knight in shining armor-style. There were a few times when Meg gets the chance to be the heroine—and she does a pretty nice job—but she’s at her best when she’s being the spunky sidekick to Jo. 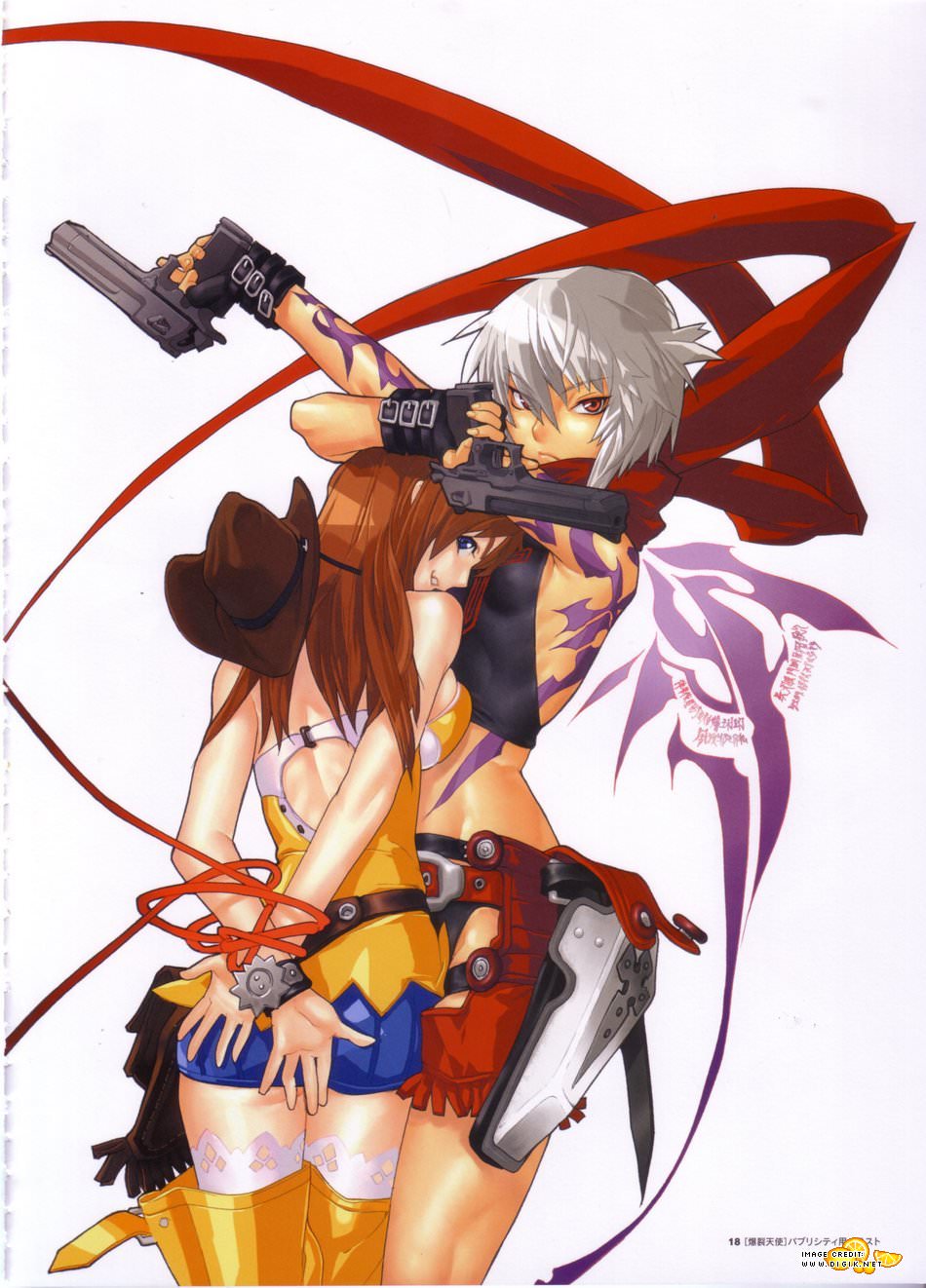 As for how yuri ties into this anime, most of the cute Jo x Meg moments happen in the final third of the season, with my personal highlight being the kiss on the cheek that Meg gave to Jo in the final episode. Jo isn’t the most affectionate or emotional person, so their relationship leaves a lot to be desired, and on Jo’s end of things, her most prominent display of affection towards Meg is simply protecting her. Meg’s considerably warmer than Jo, so she’s more caring and a little doting, yet they usually still don’t really resemble a couple, at least for a majority of the season. And there’s another girl that shows a lot of interest in Meg, even going so far as to lick Meg’s face, but Meg wants none of that, since she only wants to be with Jo. Attagirl~

Aside from Jo and Meg, Sei and Amy are also a part of the main cast. Sei is basically the leader of the group, while Amy is a hacker that uses her expertise to assist Jo and Meg on their missions. Both are entertaining enough and have their moments, but it’s clearly The Jo and (to a lesser extent) Meg Show, so neither had a ton of meaningful opportunities to make their mark with audiences. I definitely would have liked to have seen more of them, especially Sei.

During a portion of the season, Kyouhei—a culinary student—gets hired to be the girls’ chef, but it ends up being more than he bargained for, and he’s often dragged along on the missions. Ehh, he brought a bit of normalcy to the show, and not much else. About three-quarters of the way through the season, he’s essentially written off, and I didn’t really mind all that much. And there are a few other characters that play a small part in the story, but I don’t really care for them enough to mention them inn detail (I’m looking at you, Takane).

As I mentioned earlier, I feel like this anime really lacked notable antagonists, and there’s just no excuse for something like that. Jo’s an awesome character, but I doubt anyone wants to see a stream of throwaway villains, but at least the main cast is pretty good, and the Jo x Meg pairing had a few nice moments, so I guess I shouldn’t be too harsh. 😛

This anime premiered during the same season as another girls with guns anime, Madlax, so it’s only fitting that I briefly compare the two anime in terms of visuals. With the naked eye, both Bakuretsu Tenshi and Madlax seem very comparable, although the former exhibits a more over-the-top action style that sets it apart from the more grounded in reality Madlax, so, overall, I’d probably give the edge to Bakuretsu Tenshi. But while that style leads to more spectacular action scenes, it also comes with some drawbacks.

What I’m talking about is the CG, which ended up being more of an issue than I thought, mostly due to how frequent the mech battles were. For a majority of the season, it wasn’t much of a problem, but down the stretch, the girls’ mech (Django) saw a lot of action, and having two giant CG mecha frequently battling on-screen became a bit of an eyesore (especially when the show makes the decision to use an odd color palette). And something else that perplexed me was the inconsistent breast sizes of Meg and Sei. In some scenes, their boobs seemed a certain size, and in other scenes, they seemed to appear quite a bit larger, but it’s not like I was paying super close attention to that or anything… 😛

On the plus side, however, I liked the cyberpunk themes (but still wish they would’ve gone even further with it), and the show’s vision of a futuristic Tokyo is pretty interesting. So, overall, I think this show has a more distinct visual style than the Bee Train trilogy, and I liken it more to Canaan than any of those other anime. The mecha battles likely won’t be to everyone’s liking, yet the show still probably has enough going for it action-wise to satisfy fans of the genre.

And when it came to the music, nothing especially stood out to me. I don’t mean that as an insult or anything, since pretty much everything I heard was solid, it’s just that I never really thought to myself “Wow, this music is really nice!” Something I did notice, however, was that OP, which sounds kind of silly at first, but it really grew on me. So I think the music was fine, but not anything special, and that’s perfectly acceptable.

If you’re into the girls with guns genre, there’s little doubt that you’ll like what Bakuretsu Tenshi has to offer. It sports some good action, a badass main character, and a little bit of yuri to please fans, but the story leaves a lot to be desired. With a few narrative improvements, I think this would’ve been neck and neck with other shows like El Cazador de la Bruja and Madlax (I still would’ve given the edge to Noir and Canaan), but as it stands, this is a more than serviceable entry in the genre.