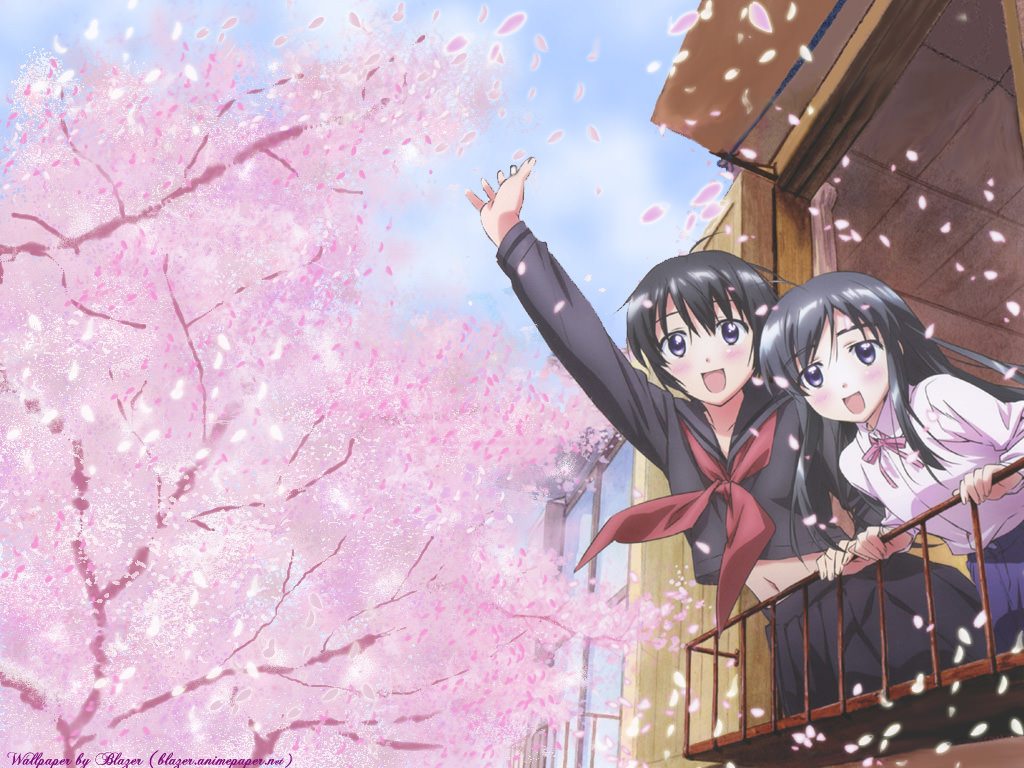 Binbou Shimai Monogatari is another anime that I found while wandering around the yuri clubs of MyAnimeList, and this one involves two sisters, but it’s definitely not Citrus or Candy Boy. It’s something more… forgettable.

Synopsis: The Yamada sisters, Kyou (15) and Asu (9), are students studying in secondary and primary schools respectively. Their mother passed away and their father ran away after incurring gambling debts. Despite the difficult circumstances, both of them decide to overcome the unhappiness and welcome their days with enthusiasm and pride. Fortunately, with the change in the law system several years ago, Kyou is able to study and simultaneously take temporary jobs (such as distributing newspapers and tutoring) to make ends meet. On the other hand, Asu takes charge of household chores, prepares meals, and manages the finances to assist her older sister. Surrounding them are also good and kind neighbors such as the novelist, Saegusa-san, and the aunt at the public bath who watch over them. Although life is difficult and at times painful, the sisters are happy to have each other.

That synopsis pretty much explains all that you need to know about the story of this anime, and over the course of the show’s ten episodes, what we see is Kyou and Asu go about their daily lives and try to make the best out of their unfortunate situation. A lot of that entails some rather mundane scenarios that don’t add a ton to the overall entertainment factor, but that’s par for the course for the slice of life genre, and a large part of the enjoyment of this show comes from the very high cute factor involving the two sisters, Kyou and Asu.

When I say “cute”, I don’t mean cute as in over-the-top levels of moe that you’d typically find most modern day slice of life anime. Sure, Binbou Shimai Monogatari has some of that, but for the most part, this is a surprisingly serious anime that I don’t think really earned that comedy tag. This show leans more towards drama than comedy, yet I wouldn’t say that it overdid it in that regard. The show finds a nice middle ground between seriousness and lightheartedness, though, it doesn’t excel in either category.

“If they weren’t related or were simply a bit closer in age, their couple-like qualities would shine through even more, but given their tragic circumstances and the fact that they only have each other, I can’t say that their relationship is much more than you might expect from two young sisters in that situation.“

That’s probably my biggest knock against the story, how seemingly every episode brings with it different situations that are pretty forgettable and only mildly entertaining. Given what happened to their mom, it’s no surprise that there are a lot of sweet moments between Kyou and Asu, and I thought that those poignant moments were easily the best thing about this anime. But a lot of the day-to-day activities involving the girls are kind of boring and unfulfilling, and no amount of sisterly affection could change that.

In a way, I kind of liken this to Candy Boy in terms of overall tone and pacing. It’s certainly not the most exciting anime you’ve ever seen, but it’s a humble and wholesome look at the close-knit relationship between two sisters who are doing their best to be there for each other. Some might find all of this a little too boring, however, the cute nature of the show is somewhat appealing, and the show has a good message it wants to get across, so I don’t think the story is that bad.

The story is all about how these two sisters cope with the hardships that they face, and together, I thought that they were slightly more than the sum of their parts.

Kyou’s dedicated and hard-working nature perfectly complements Asu’s surprisingly mature personality, so much so that they’re almost like one person inhabiting two bodies. They’re extremely close, and their reliance on each other is heartwarming and sweet, but just like how I mentioned earlier that the scenarios they encounter are pretty ho-hum, so are Kyou and Asu. Over the course of the season, neither moves very far from their established position as overly caring and protective sister, and as a result, I thought that their personalities were stagnant and a bit dull. After a while, things just became repetitive, and I would have liked to have seen them be less one-dimensional.

As for how yuri ties into all of this, it’s pretty obvious. It’s due to the close-knit relationship between the girls, although I certainly wouldn’t say that there’s a sense of romance between the two. They are fifteen and nine, after all. Still, I can see where people are coming from when they say that this has some yuri. If they weren’t related or were simply a bit closer in age, their couple-like qualities would shine through even more, but given their tragic circumstances and the fact that they only have each other, I can’t say that their relationship is much more than you might expect from two young sisters in that situation.

During one of the best episodes, Asu becomes jealous when she spots Kyou giving Valentine’s Day chocolates to a boy, but this was all a misunderstanding, and she comes to the realization that even when Kyou really does find someone to date, she won’t abandon her. All in all, Kyou x Asu is ultimately a lot of wishful thinking, but it’s not hard to see the yuri undertones. That might not be worth the price of admission for some people, but I appreciated it.

There are a few other characters that play a part in the story (such as the Echigoya sisters), but by and large this is all about Kyou and Asu, and none of the other characters really did anything for me. So even though Kyou and Asu are cute, they still leave a lot to be desired, and I’m not sure that the subtext will be enough to change people’s perceptions of them. It obviously wasn’t for me.

When it comes to the animation, this show isn’t much to look at, with its simple artwork and a general low-budget style that even predates its 2006 release date. Not that that kind of stuff really matters in an anime such as this, yet I’m sure some people will still find the bland and lifeless look of the show off-putting, and I could totally understand that.

As for the music, I thought it was definitely an improvement over the visuals. Musically, this anime really nails the easygoing vibe, and there are plenty of soft and pleasant tracks that add to the light atmosphere. That said, the music doesn’t stand out a whole lot, but it’s some competent background music that suits the tone of the show, and that’s more or less what I expected all along.

Overall, Binbou Shimai Monogatari is a cute, little anime, but it just didn’t have enough going for it to really draw me in. I was particularly disappointed with the characters and the animation, but at least the strong bond between the two main characters was enjoyable. That might not being enough to justify watching this show, yet things could’ve been worse. 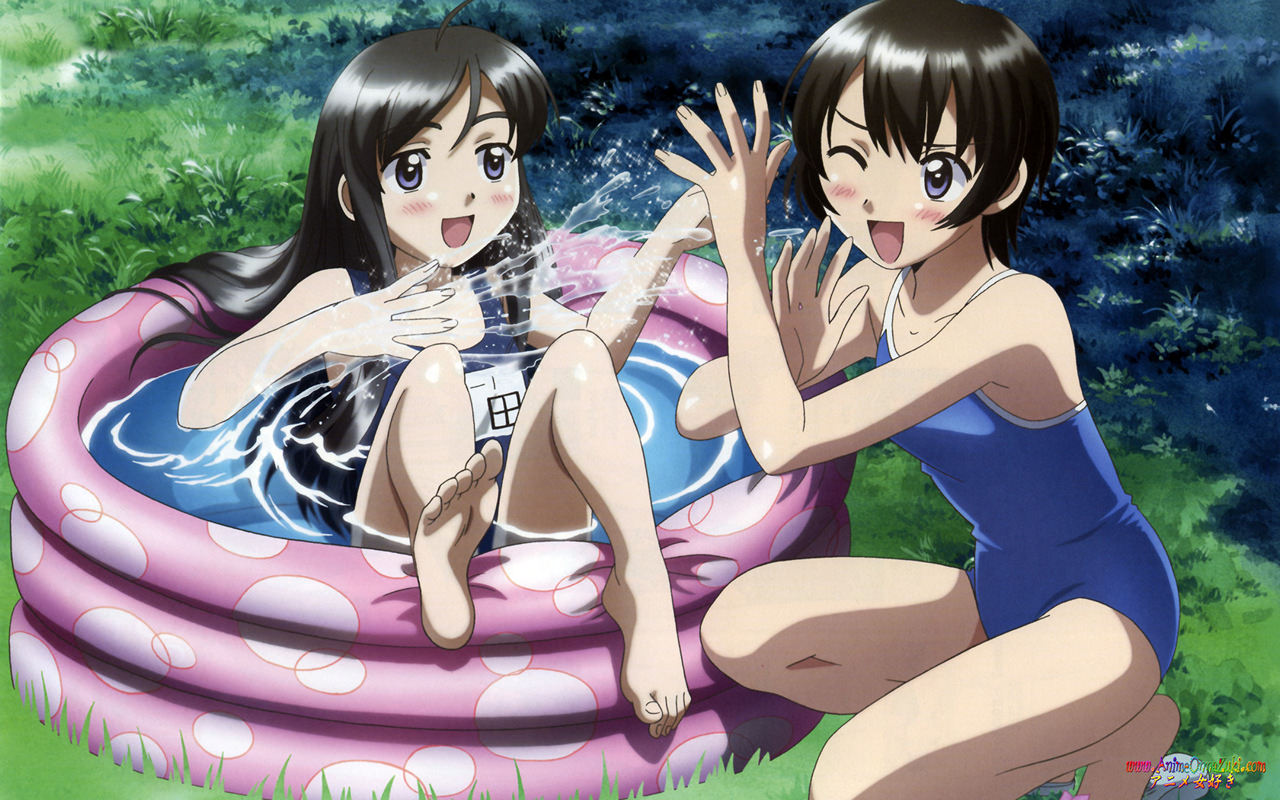