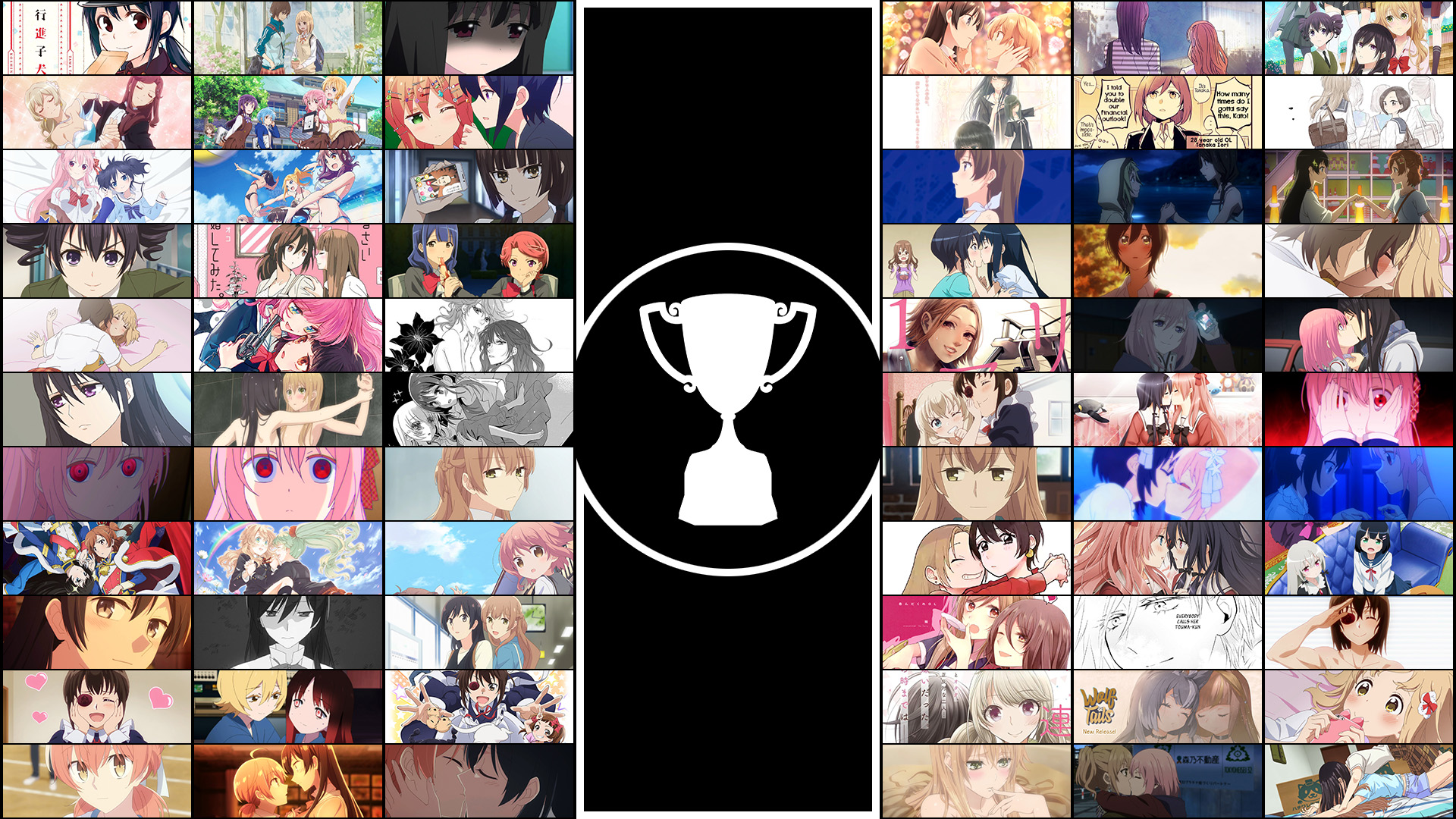 After crunching the numbers and tallying the votes, you guys have made your voices heard as to what your choices are for the best yuri that 2018 had to offer.

There were a lot of very familiar names that rose to the top, but there was also a pick or two that took us a little by surprise. Without any further ado, here are the winners, as chosen by you, the fans. And regardless of who you voted for, thanks to everyone who voted for their favorites~

Any one of the three anime would’ve been great choices, but you guys let it be known that Bloom Into You was your overwhelming choice for Best Yuri Anime of 2018, garnering a staggering 60% of the vote.

While Bloom Into You winning isn’t a huge surprise, I think it is really surprising just how much it won by. Citrus came in a distant second, finishing with 22.5% of the vote, and bringing up the rear was the fluff-filled Asagao to Kase-san., with just 17.5% of the vote.

This was one of the most intriguing decisions that you guys had to make, but after a hard-fought battle, it was Hana ni Arashi that ended up victorious. It brought in over 21% of the vote, with A Love Letter from the Marching Puppy and Lily Love 2 ~Frosty Jewel~ coming in second and third with nearly 16% for the former and more than 14% for the latter.

It would’ve been interesting to have included a handful of manhwa in this category, but that shouldn’t take away from Hana ni Arashi‘s win, since this is another excellent choice.

And no matter who you voted for, I think we can all agree that there’s a lot of good yuri out there to read, so unlike the previous category, there should be no shortage of great nominees for the foreseeable future~

Trailing Maidens of Michael‘s 44% of the vote, we saw Flowers with 27%, Sisterly Bliss with more than 22%, and Wolf Tails with nearly 7% of the vote.

I’d like to say that I’m surprised by the outcome of this one, but I just can’t. Flowers may be the VN du jour, but whenever there’s a new installment in the SonoHana series that makes its way to the West, you best believe that it’s going to be met with a lot of fanfare. That begs the question: If a red-hot series like Flowers can’t beat out SonoHana, what can?

In what was one of the closest races of the election season, Yuzu Aihara continued her dominance and eeked out a victory over a field of very game challengers that were coming for her crown.

She received more than 27% of your votes, which was just enough to edge Yuu, whose 23.5% wasn’t quite enough to claim the top spot. Rounding out the top three was Sayaka, but her 12% was still respectable.

What’s left to say about Yuzu that hasn’t already been said? You guys obviously seem to love her, and with Citrus+ now ongoing, I have a feeling that we haven’t seen the last of her on these awards posts of ours…

This was another close race, but Yuzu’s popularity wasn’t enough to elevate her and Mei to the award. The Citrus pairing finished third with nearly 23% of the vote, so despite the SonoHana fans supporting their girls, it came down to the other two superstar pairings of yuri anime in 2018.

Obviously, you folks gave Yuu and Touko got the nod, with nearly 38% of the vote, compared to Kase and Yamada’s total of nearly 35%. It’s already an impressive showing for Bloom Into You in these awards, and we’re not even halfway done yet.

This win is really impressive, considering that Touko & Sayaka have a sizable fanbase of their own. Beating uber popular couples AND doing it with what some may consider the “B-Team”? That just goes to show how the fandom has embraced this series, so it’ll be a shame when the manga eventually comes to an end.

I’m sensing a theme here. Yes, Bloom Into You wins another award, this time, in the form of Best Yuri Kiss, and it wasn’t even close. 46% of you chose Yuu and Touko’s liplocks over the rest of the field, with Yuzu x Mei (23.5%) and Kase x Yamada (more than 20%) finishing a distant second and third.

In arguably one of the greatest years in yuri history, you guys seem to have one series standing head and shoulders above the others. No matter which kiss of Yuu and Touko’s you’re thinking about, you can’t really go wrong with any of them.

Yuu and Touko’s kisses seemed to have it all, and even if you’re on Team Sayaka, you can’t deny that these were pretty damn great. Take notes, future makers of yuri anime.

There were some solid nominees up for Best Yuri-ish Anime, but only one of them produced several viable pairings and helped elevate a genre (music) that some people tend to look down upon.

More than 46% of voters went with Shoujo☆Kageki Revue Starlight as their choice for Best Yuri-ish Anime, which was easily enough to beat out Comic Girls, which finished second with just over 16% of the vote.

I loved how Shoujo☆Kageki Revue Starlight was not just another Love Live! clone, and in my eyes, any future music anime is going to have a lot to live up to in order to match the pure spectacle and yuri goodness that this one brought to the table.

Given how Bloom Into You has been raking in these awards, you’d probably expect Touko and Sayaka to easily take this one home… and that’s where you’re wrong, kiddo! 😛

In what has to be considered a major upset, the MayaKuro fans rose up and showed some love to their two Top Stars, giving them 32.7% of the vote. The pairing that I thought would’ve won, Touko x Sayaka, only mustered just over 25%.

Despite not even being the most visible pairing in their own series, Claudine and Maya seem to have captured the imagination of the yuri community, and even though it won’t happen, I’d love to see the two of them (and the other pairings from Shoujo☆Kageki Revue Starlight) each get their own OVA.

This was the most simple race of the entire election season (only two nominees), and to no one’s surprise, Satou won in a landslide, with over 71% of the vote.

It seemed no matter how crazy Tsubame was, Satou was always one crazy step ahead of her. Tsubame’s in love with a child? Big deal! So is Satou. Tsubame goes to highly inappropriate lengths to be near her pint-sized love interest? So what? Satou KILLS in order to preserve her and Shio’s “happy sugar life” together. Edge: Satou.

Like Yuno (Mirai Nikki) before her, Satou showed exactly why people are so fascinated with yanderes, and it’s only a matter of time before she’s declared a Yuri Anime Legend.

In a way, Sayaka winning Most Suffering Character is a bit of a surprise. I mean, Aya is beaten and bullied on a regular basis, and at one point, she tries to take her own life, so she clearly has it REALLY bad. Then again, these are your awards, so if you want Sayaka to win, that’s up to you, and it’s not like Mahou Shoujo Site is incredibly popular or anything, so maybe people just aren’t aware of Aya.

Anyway, Sayaka pulled in more than 42% of the vote, with Aya getting more than 22% and Touko finishing third with nearly 16% of the vote.

I’m a big fan of Sayaka, so it’s nice that she was able to get an award of her own, and it’s yet another one for Bloom Into You, which has absolutely dominated this awards post. Maybe we should’ve just named this post the Bloom Into You Awards instead… 😛

Did things play out like you thought they would, or were there surprises you didn’t see coming? Let us know in the comments~