It’s that time of the year again, so enjoy our Final Thoughts of the 2018 fall anime season that just came to an end~ 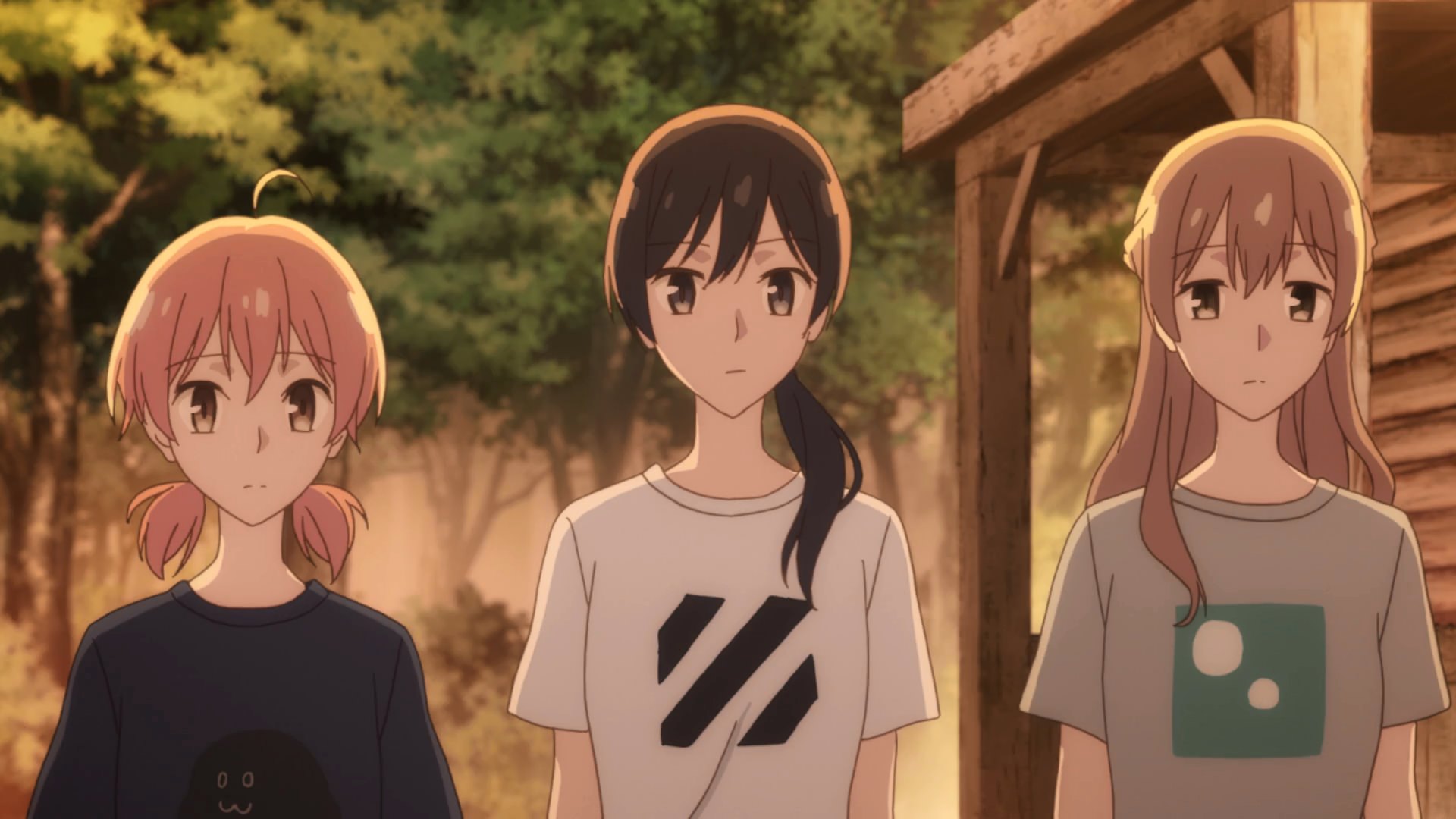 Now, as the last of what I like to call the Big Three (namely Citrus, Asagao to Kase-san., and Bloom Into You) has come to an end, I first just want to state how very satisfied I am with what 2018 offered to us yuri fans. It’s quite hard to tell which of the Big Three was best, seeing that they all depicted the yuri in very different ways, but what I can say for sure is that the community made it very vocal that we liked all three.

Now Bloom Into You—as the last to come to an end—has a very special place in my heart for not only bringing the content of its manga onto the big screen, but also for delivering so much more. It’s hard to put into words what this adaptation did to me and probably the majority of the community. In short, it was some top-notch adaptation that I simply couldn’t be happier with.

Well, my review will soon follow, of course, but please be a little patient. During this time of the year, we have quite a lot of posts scheduled. 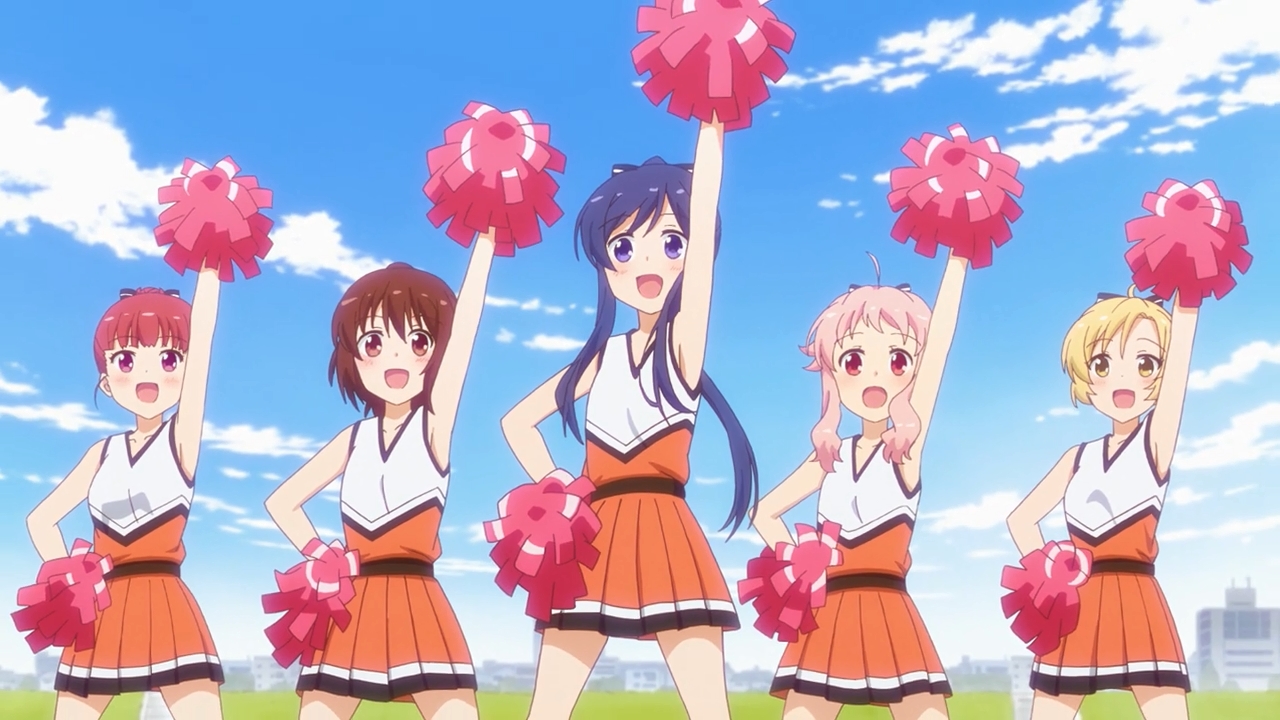 It’s debatable whether cheerleading is a sport or not, but what can’t be argued is that cheerleading is underrepresented in anime, so it’s nice to get something a bit different to watch. I say different, yet this is still very much just cute girls doing cute things, but at least it’s pretty charming and entertaining.

A major source of that entertainment is Kohane, who I thought was probably one of the better characters of the season. In fact, I thought that the entire cast was a lot more enjoyable than I expected them to be, and they’re the main reason I slightly preferred this show over Tonari no Kyuuketsuki-san, but they still weren’t great or anything. As expected, the story is barely passable, but the cheerleading aspects lend themselves quite well to the fluffy slice of life moments that fans want to see. And even though this show features a lot of school activity that may sound kind of mundane, I think the show maintains a good sense of fun without being too over-the-top, and the comedy was more than adequate for me.

Lastly, you can’t have cute girls doing cute things without some subtext, and Anima Yell! has a small-ish amount for us. Aside from a confession from one random girl to another, the most obvious examples are Uki’s fondness for Kohane as well as Ushiku’s admiration towards her senpai, Hizume. Most of these moments are too few and far between, however, so it’s not really as good as it sounds. All in all, I think Anima Yell! was a little better than I thought it’d be, so fans of cute girls doing cute things might enjoy this one a little bit. 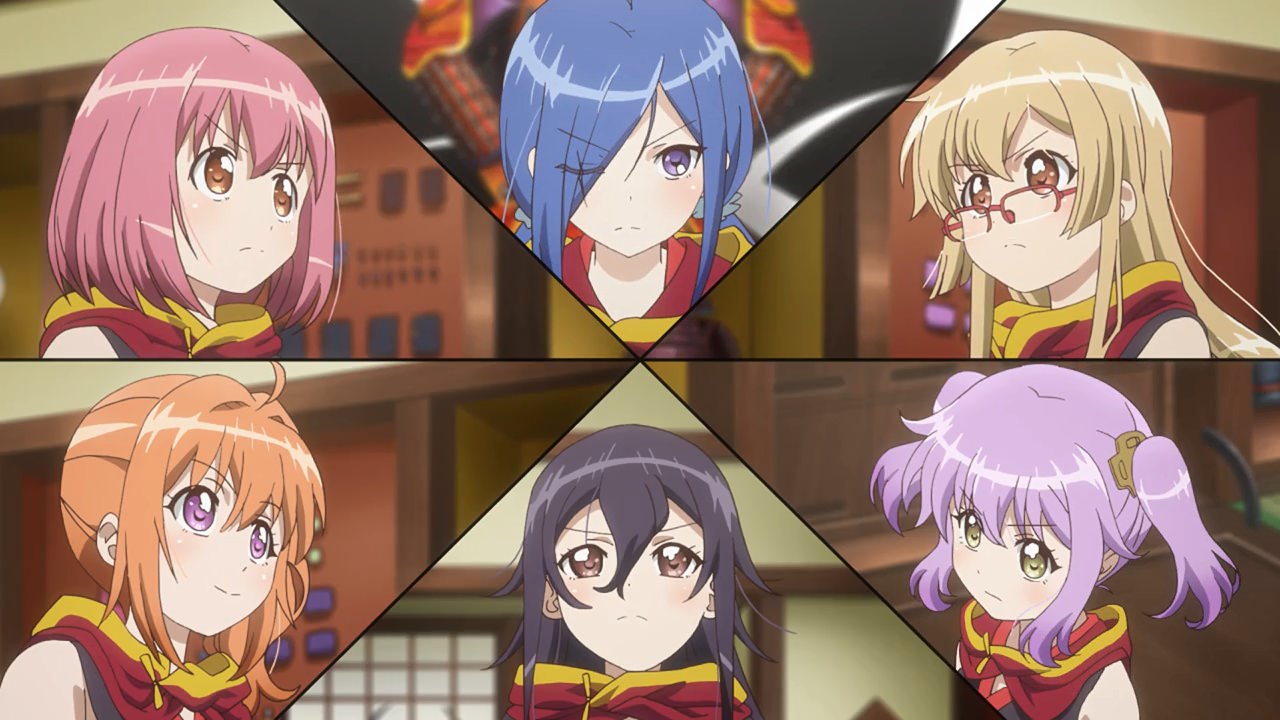 Mostly thanks to the excellent Princess Principal, spies seem kind of popular nowadays, and here’s another show looking to capitalize on the trend, Release the Spyce. While I certainly didn’t expect it to be in PriPri‘s league, I thought that this was a decent enough spy romp that might satiate people until Dorothy & company return next year.

The action wasn’t anything special, but it was serviceable, though, a lot of the missions the Tsukikage girls went on felt really underwhelming. Taking on random goons that are somehow tied to Moryo (an evil crime syndicate) seemed like a waste of time, and it didn’t do much to progress the story, which spent a good portion of the season in dire need of some, wait for it, spice. To the show’s credit, however, there was a little bit of character development along the way, even if the girls didn’t have a ton of compelling things to do for a while. Speaking of the characters, the story didn’t do them any favors, and I feel like they were all more interesting than they were portrayed to be.

As for the yuri, there were a few moments that come to mind, like episode four, which mostly focused on the relationship between Fuu and Mei. Given the mentor x apprentice setup that exists within Tsukikage, the pairings are provided for us (Fuu x Mei, Momo x Yuki, Hatsume x Goe, and Hatsume x Theresia as a bonus), and they each provided at least a little something for yuri fans. Because of the art, I was hoping for something closer to Yuru Yuri levels, but this show definitely doesn’t go that far. Overall, Release the Spyce was entertaining at times, and at other times, it seemed like there was far too much filler involved. Some of the yuri moments helped matters, but if another season of this eventually gets made, I hope it’s a little better than this season turned out to be. 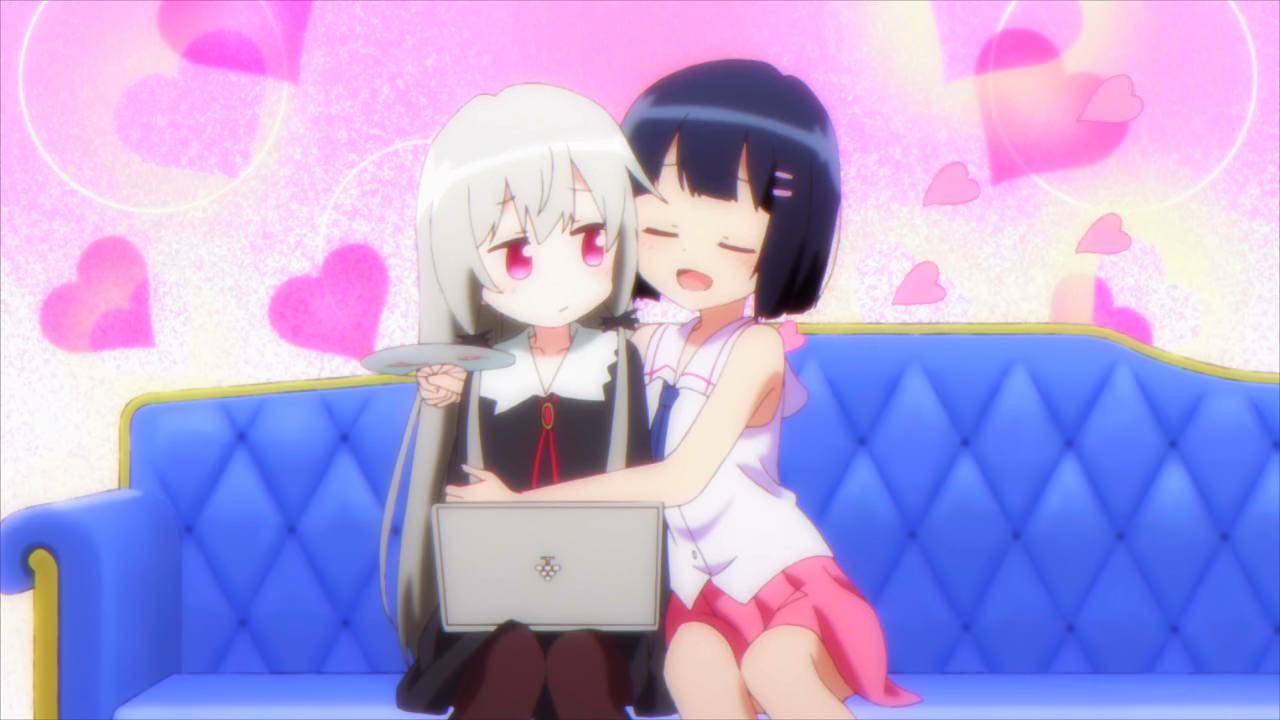 When an anime has the “shoujo ai” tag, it’s going to drum up quite a lot of interest, regardless of how good the show actually is. In Tonari no Kyuuketsuki-san‘s case, it’s a decent cute girls doing cute things anime with a fun yuri twist, but in such a strong season for yuri anime, it’s still a little forgettable.

It’s not really for a lack of yuri, as you could say that Akari, Ellie, and Hinata are all yuri characters, to some degree. Akari and Ellie especially seem pretty gay, since both of them have it bad for Sophie. It’s not the yuri that makes this anime seem pedestrian, I’d say it’s the combination of merely adequate characters and a ho-hum story that seems all too familiar, despite playing up the whole vampire angle. Speaking of that, all of the vampire gags were pretty amusing, but it feels like there has been a lot of fantasy/supernatural slice of life lately, and Tonari no Kyuuketsuki-san didn’t do enough to distinguish itself from all of the others.

All in all, this show can’t measure up to recent cute girls doing cute things anime like Yuru Camp△ or Comic Girls, and despite the yuri, this is an anime that lacks substance, and I doubt many people will remember it. 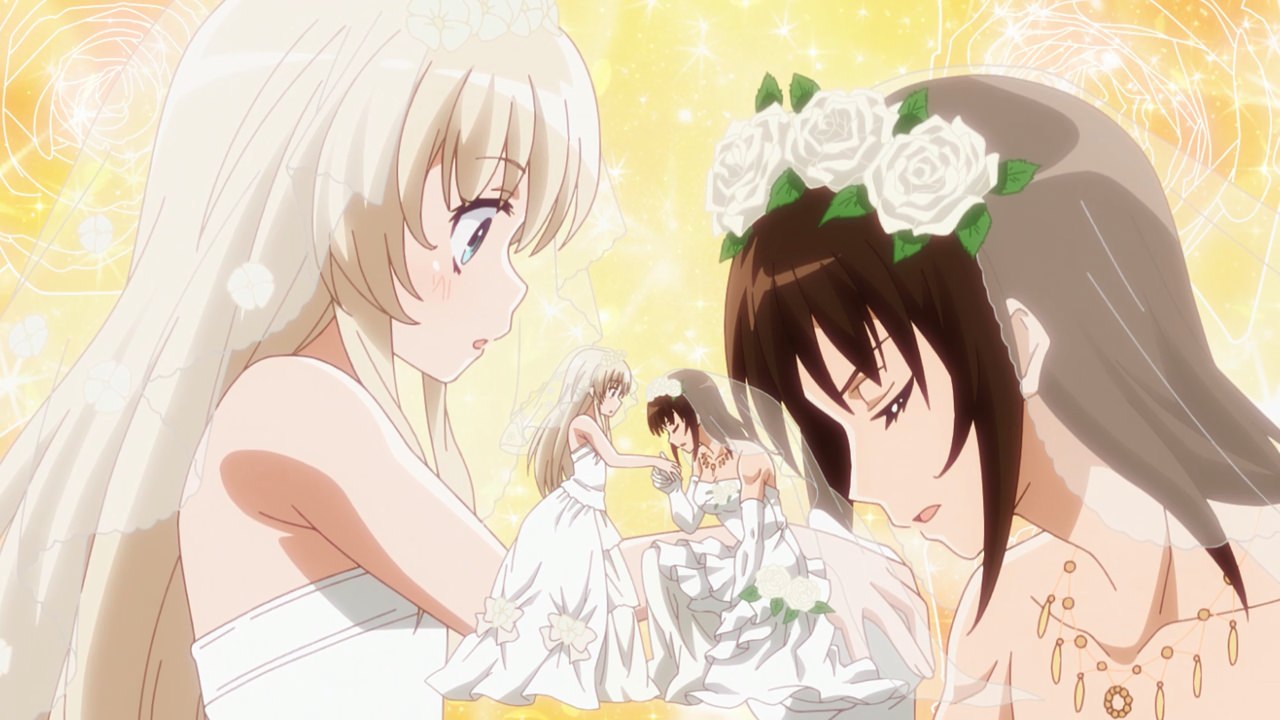 My thoughts are torn when it comes to this one. On the one hand, I think other than Zombieland Saga, no other anime made me laugh this hard. On the other hand, however, I guess I’m just not okay with the main premise. I think the most obvious thing to say here is that this is simply not a show for yuri fans, despite the fact that what is shown here definitely is love between females. Well, simply put, Tsubame might have some very inappropriate feelings for Misha, but given Misha’s age, it’s just not what most people want to see happen anyway.

And while the anime does definitely show some inappropriate moments, in my opinion, it never crosses the very thin line that would deem this anime not okay in my book. The focus is always set on the comedy aspects, and while some might (rightfully so) want to stay away from this one for obvious reasons, I just can’t help but actually enjoy UzaMaid for the hilarious show that it is. 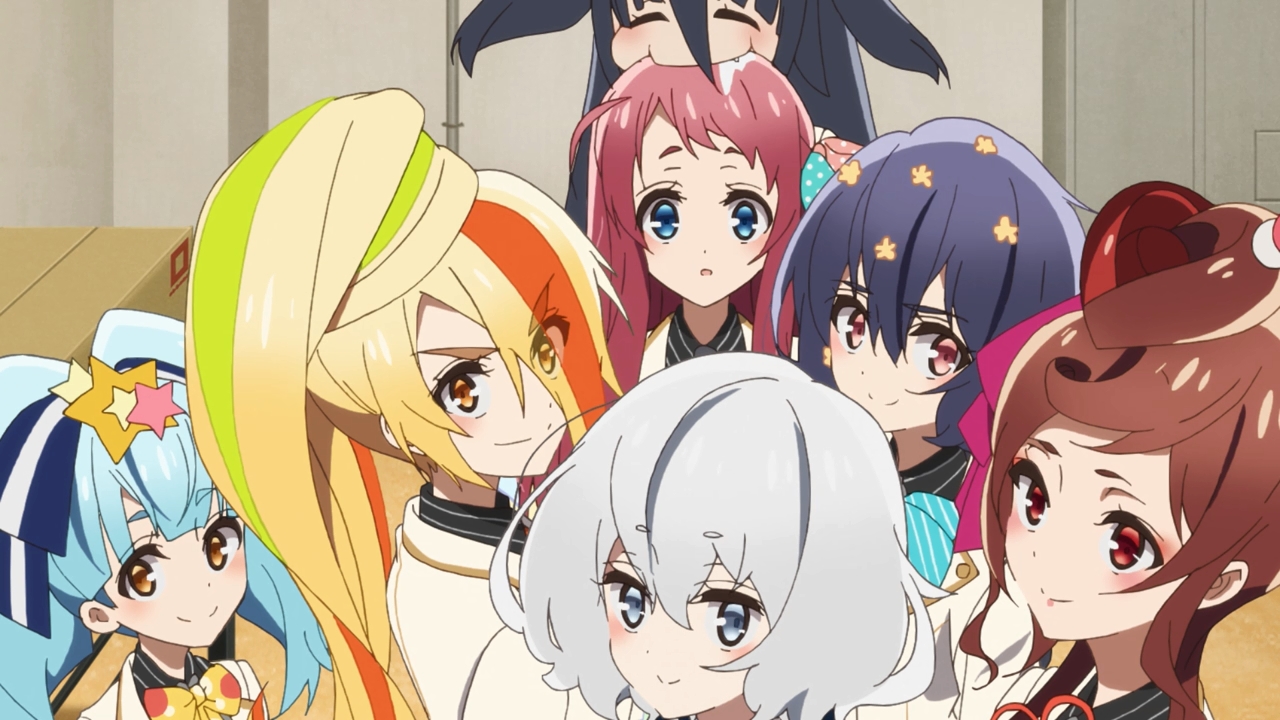 Talk about a show coming out of nowhere. The premise of Zombieland Saga has to be one of the most ridiculous in quite a while, but everything somehow came together very nicely, and even though this wasn’t my favorite show of the season, I think this is as entertaining an anime that you’ll find this fall. Who would have thought that a show about zombies would have a heart?

The story of a group of undead girls trying to make it as idols is every bit as stupid as you’d imagine, but there are times when this show actualy does take itself seriously, and it works a lot better than you might imagine. I like that the show is not all one big joke, and that little bit of drama adds some nice depth. This anime is good when it involves absurd zombie shenanigans, but, for me, it was at its best when it was defying expectations and telling a heartwarming story involving one of the characters. Speaking of shenanigans, that rap battle in the second episode may be one of my favorite anime scenes of the entire year, oh, and those idol scenes? They’re surprisingly decent, yet I don’t think anyone will confuse this with Love Live! or The iDOLM@STER, and the CG during the performances could’ve been better.

I haven’t even talked about the characters yet, but this is another aspect in which Zombieland Saga shines. Yes, a character like Yuugiri don’t stand out as much as the others, yet most of the characters (Koutarou included) are memorable and have interesting backstories. And because I know some readers appreciate it, there’s even trans representation in this anime, and the show actually handles it with respect. Cygames has already hinted that the franchise will continue on, but we’ll have to wait and see whether that means a second season or just something like a mobile game. This one is actually selling very well in Japan, so hopefully we’ll get another season.