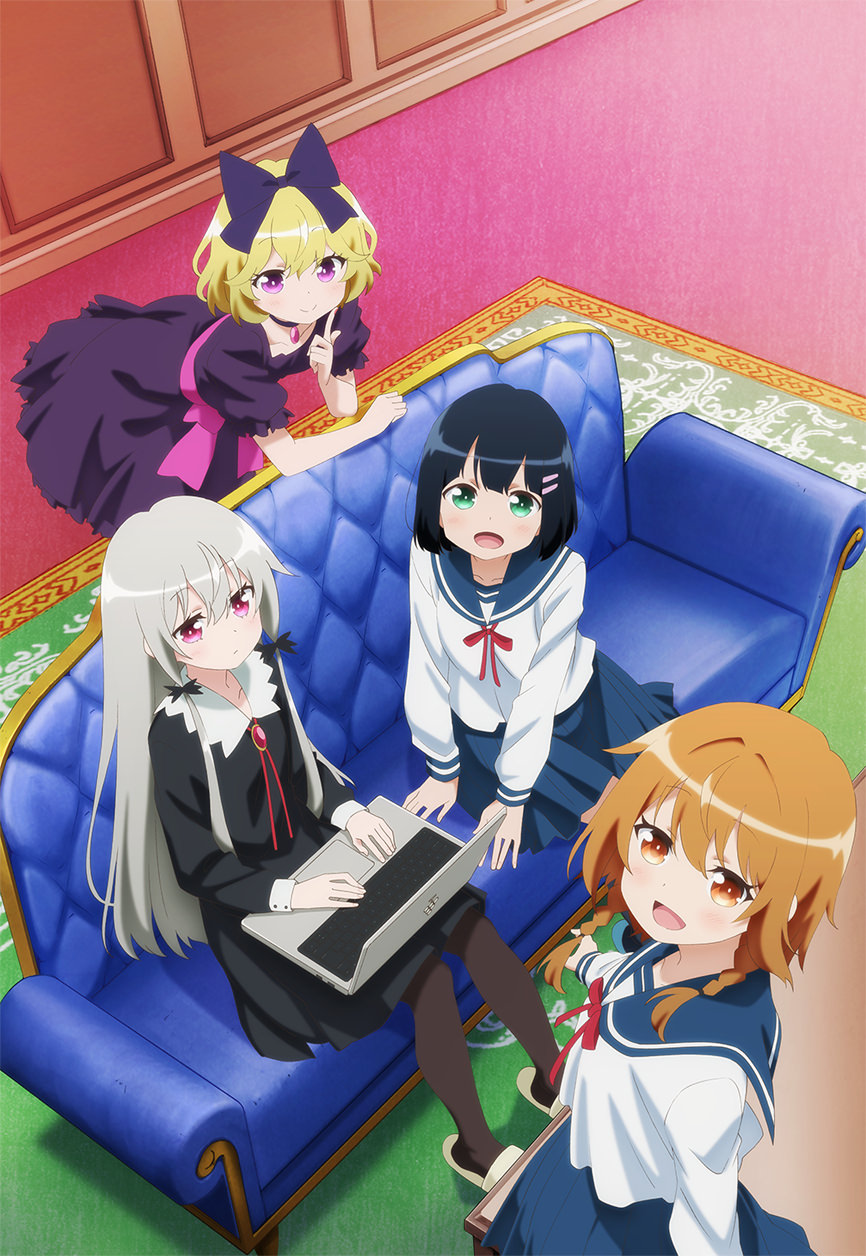 Lost in the winter shuffle was this amusing little anime about humans and vampires, and while it won’t make anyone forget about the Yuru Yuri‘s of the anime world, it’s actually a pretty decent watch~

Synopsis: The modern-day vampire comedy centers on high school girl Akari Amano, who was saved from a strange incident by a vampire girl named Sophie Twilight and has been interested in her ever since. Akari arrives at her house uninvited, and the two start to live together. Although she’s a vampire, Sophie never attacks humans but purchases blood and anime goods via mail and lives a modern life.

In the past few years, we’ve seen all sorts of cute girls in these sorts of anime. It doesn’t matter if they’re a demon, an angel, a witch, a serpent, a dragon, a minotaur, a vampire, or any other form, cute girls are cute girls, and this anime has no shortage of them.

On paper, Tonari no Kyuuketsuki-san sounds like it should be a great time. Compared to most other slice of life anime, a show about a vampire girl seems pretty unique, yet the biggest problem I had with the story is that it seems to rely on that fact too much, resulting in comedy that can at times get stale. You can only hear the same punch line so many times before it gets repetitive, and for me, “because she’s a vampire” just seemed to be used one too many times.

That’s not to say that the comedy fell flat. Most of the time, this was a somewhat funny anime, and for fans of cute girls doing cute things, there was a ton of moe fluff that I’m sure they’d probably love. The odd couple dynamic between Sophie and Akari is also fun, and Ellie’s arrival only adds to the hijinks involved. I would have liked it if this anime had strayed a little further from typical slice of life clichés and scenarios, because you get the feeling that there was some untapped potential just could’ve helped elevate this show to another level.

“Naturally, it’s Akari and Sophie that yuri fans are going to gravitate towards the most, but this is a very one-sided relationship that sees Akari act as the lovable creepster that somehow manages to make a vampire feel uncomfortable.”

Moving on to the characters, the mix of normal girls and vampire girls is what sets this show apart from so many others in the genre, and I was pretty pleased with the cast of characters that this anime had to offer.

Naturally, it’s Akari and Sophie that yuri fans are going to gravitate towards the most, but this is a very one-sided relationship that sees Akari act as the lovable creepster that somehow manages to make a vampire feel uncomfortable. While Sophie never shows any sort of romantic interest in Akari, none of that matters to Akari, who’s so enamored with Sophie’s resemblance to her precious dolls that she’s always eager to get close to her. This infatuation of Akari’s plays a huge part in the comedy, so anyone hoping for something serious and meaningful probably won’t find what they’re looking for here. I also have to mention that there was a nice, little MariMite reference in the third episode, so kudos for that~

But to be fair to Akari, Sophie is absolutely adorable, so I can see why Akari’s so interested in her. The Chino look-a-like may be a vampire, yet she’s actually as normal as can be, and she’s seemingly more normal than Akari. Quiet and peaceful, Sophie is pretty much the opposite of that other cute girl vampire, Ellie. An old acquaintance of Sophie, Ellie is the slightly more stereotypical vampire who does enjoy sucking blood and does distrust humans. Still, her attraction to cute girls will undoubtedly endear her to yuri fans, as will her flirty nature that’s quite the opposite of Sophie’s reserved demeanor.

But wait, there’s more gay girls! In addition to Sophie and Ellie, Akari’s best friend, Hinata, has a mild crush on Akari, so that’s one more thing this anime has going for it. But notice how I said mild crush. While Akari is obviously hella gay, both Hinata and Ellie only show flashes of their gay potential, so despite having three different girls favor the fairer sex, the yuri levels are more in line with KinMoza than Yuru Yuri. And don’t forget Akari’s other two friends who are in the occult club. They aren’t around often at all, but they seem to have a thing for each other, so that’s another welcome development.

All in all, I think this is a pretty enjoyable cast of characters. They’re cute, fairly charming, and gay enough for fans of the genre to take a liking to them.

For a slice of life anime, I think Tonari no Kyuuketsuki-san looks a little better than what you might expect. Now, that doesn’t mean there are any elaborate scenes that show off some stellar animation. Visually, this reminds me a lot of Comic Girls, thanks to the rich and colorful aesthetic that adds to the extreme levels of cuteness. The backgrounds are rather simple, and this show certainly can’t match the quality of the direction or the presentation of Comic Girls, yet I think it stands out a little more than your average cute girls doing cute things anime.

As for the audio, it’s more or less what you’d expect of a show like this. It’s upbeat and cheery, but I feel like the music in slice of life anime is very interchangeable, and there’s very little that sets one show apart from another. That’s also the case here, but I honestly doubt that anyone’s gonna notice the background music all that much anyway, so I don’t think it really matters.

Overall, Tonari no Kyuuketsuki-san was a fairly enjoyable slice of life anime that didn’t do anything great, but it did enough things well enough that I think fans of cute girls doing cute things will still find plenty to like here. It’ll likely seem very familiar to fans of the genre, and it isn’t anything special, but if you’re craving something cute and gay, look no further.