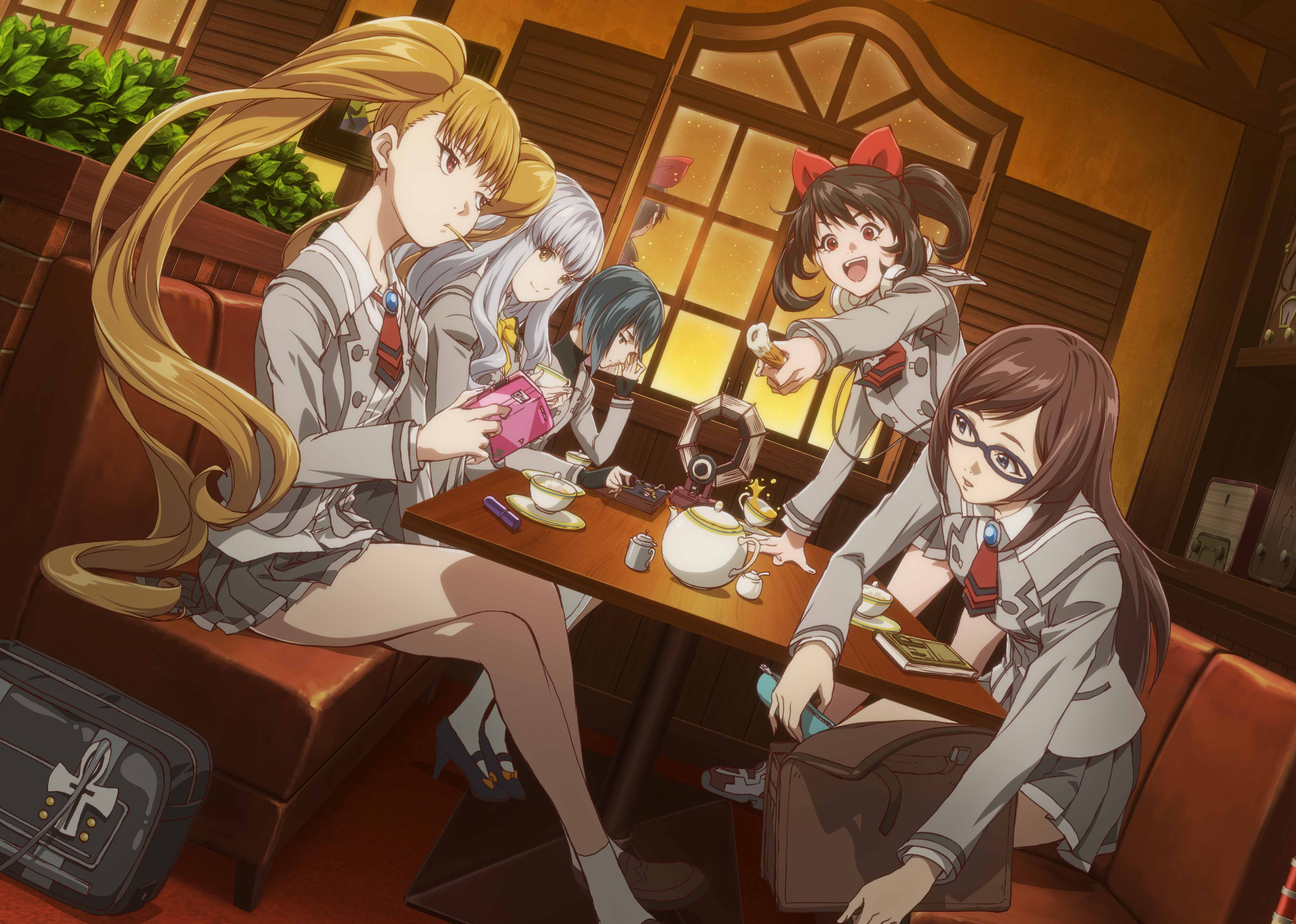 Another under-the-radar anime from this past fall season was Akanesasu Shoujo, but it turns out that some missed opportunities end up holding this anime back from what it could have been…

Synopsis: October, 2018. Girls who live in a provincial city perform a certain ritual. The girls are in the “Crystal Radio Club.” It is an interest circle that Asuka Tsuchimiya, a girl known for her cheerfulness, started with friends in her high school. That ritual was considered just an urban legend. However, with several conditions coincidentally falling into place, it stops being fun and games…

From the studio that brought us the all-time classic Pingu in the City comes Akanesasu Shoujo, an isekai anime that’s all about parallel worlds and girls that use Walkmans to transform into super-powered versions of themselves. That synopsis above makes the show sound really dark and brooding (unlike my synopsis :P), and while the show has some dark moments like that, it’s not exactly gloom city, and in this case, I consider that a good thing, since the comedy is pretty enjoyable.

The thought of parallel worlds is undeniably awesome, and this anime gets off to a decent start after the girls succeed in their ritual and run into another Asuka, who then proceeds to wipe out some evil creatures (they’re named Noizies. Seriously.) in one of those parallel worlds. In addition to this, Asuka has also been dealing with a family tragedy (a missing brother), which further adds to the intrigue. But from here, the story takes a bit of a detour…

“Near the end, the more familiar Yuu also gets in the yuri act a little bit, and even though her actions are heartfelt and sweet, it’s still great to see Yuu show her true colors (rainbow) for a minute.“

By this point in the story, I pretty much stopped caring about Asuka’s missing brother, and (to a lesser extent) the other parallel worlds that the Twilight was consuming. I wasn’t given much reason to care. But after Nana, Mia, and Chloe each have their day in the sun, we finally get back to the whole missing brother/Twilight story… and it’s kind of mediocre.

The final episode more or less wraps up Asuka’s story—and to its credit, it’s done pretty well—but it still felt to me like a somewhat abrupt and anticlimactic ending, and I was pretty disappointed. It makes sense and provides some closure, it’s just… underwhelming.

I’m all for character development, but it’s like Akanesasu Shoujo had to choose between that or a carefully woven plot, and it clearly sided with the characters. I would’ve liked to have seen more of a balance in this regard, because the end result feels like it could’ve been handled a lot better. All in all, the story did a solid job of fleshing out the characters, but I just think the overarching plot could’ve been more effective.

I don’t know how many times I’ve mentioned that the characters were pretty well taken care of, but I think they were definitely one of the bright spots of this show.

Now, I like Yuu, Nana, Mia, and Chloe, however, you can’t argue that Asuka is the star of the show, and she earns it. This chikuwa-loving genki girl is just flat-out fun, and her personality definitely stands out from the rest of the girls. One of the benefits of this anime’s parallel worlds is having multiple versions of the main characters, and this other Asuka (whom Asuka has geniusly labeled “Seriouska”) couldn’t be more different from the Asuka we come to know and love, yet her arrival ends up making Asuka even more entertaining, thanks to some fun interactions the two Asuka’s have.

Seriouska may not have the magnetic personality that Asuka has, but she kicks a lot of ass, and that has to count for something. Nana’s like the rebel of the group, and she brings a little something different to the show. That’s one of the things I liked about this anime, each of the girls have their role that they assume wonderfully, and Nana is no exception. Mia and Chloe are a lot more reserved than Asuka and Nana, yet they bring some cuteness and in Chloe’s case, gravitas, that really suits them.

And then there’s Yuu. Unlike the other girls, she doesn’t get her own little arc to showcase her personality (Yuu’s basically the voice of reason within the group), but we have her to thank for almost all of the yuri that this show has to offer. A lot of that has to do with another version of Yuu that shows up, a “sexy” Yuu (who had the misguided idea that removing your glasses makes you sexier?!) that very clearly has a thing for Asuka. So we often see her flip Asuka’s skirt and generally be the touchy, feely, and pervy yuri character that this anime desperately needed. She’s very conniving, but it seems all she really wants is Asuka, so no harm, no foul.

Near the end, the more familiar Yuu also gets in the yuri act a little bit, and even though her actions are heartfelt and sweet, it’s still great to see Yuu show her true colors (rainbow) for a minute. 😛

Along the way, some other minor characters play recurring roles in the various parallel worlds, but who cares about them?! The group of seven (counting Seriouska and Sexy Yuu) are all you’ll ever need, and it was nice that there was a generous amount of time given to get to know these characters a little better. More yuri would have been appreciated, however, I can’t really complain too much about these characters. To me at least, they’re responsible for most of the appeal that Akanesasu Shoujo has to offer, so if you’re cherry-picking what’s wrong with this anime, I don’t think the characters are an issue.

The most interesting thing about the animation of this anime wasn’t the 92% of the scenes you’ll find in this anime (which were, at times, mediocre at best), it was the CG used during the battles. Nowadays, when I think of good CG, I think of Houseki no Kuni, and while I won’t say that the CG in Akanesasu Shoujo is on that level, I was pleasantly surprised by how well it turned out.

Unlike some anime, I didn’t think the fight scenes were a jarring mess that takes away from the action, which is better than I expected (but I could’ve used more of it). I also kind of liked the designs of the various Equalizers—especially mecha cowgirl Mia—though I would’ve like to have seen more varied villains. Lastly, I like that this show doesn’t bombard us with ungodly amounts of moe cuteness like many other shows do. Overall, maybe we’re finally at the point where CG no longer has to look super awkward, and those fight scenes are easily when this show is at its visual best, because the rest of this show can be a little unsightly.

Similar to the animation, the music was definitely serviceable, and once things take a turn towards the badass, it’s actually not bad at all. Thanks in part to some recognizable names among the voice actresses, the voice acting is good as well, so for an anime that you wouldn’t think would boast a very big budget, the overall production values aren’t too much of a problem.

So this is an anime that definitely had it’s moments, yet when the credits finally rolled on the final episode, I was still left feeling unfulfilled. It has some nice action and good characters, but I felt like the story could’ve been a lot more interesting, and that to me is what’s ultimately keeping Akanesasu Shoujo from being somewhat of a hidden gem among the many yuri-ish anime that we’ve recently received.